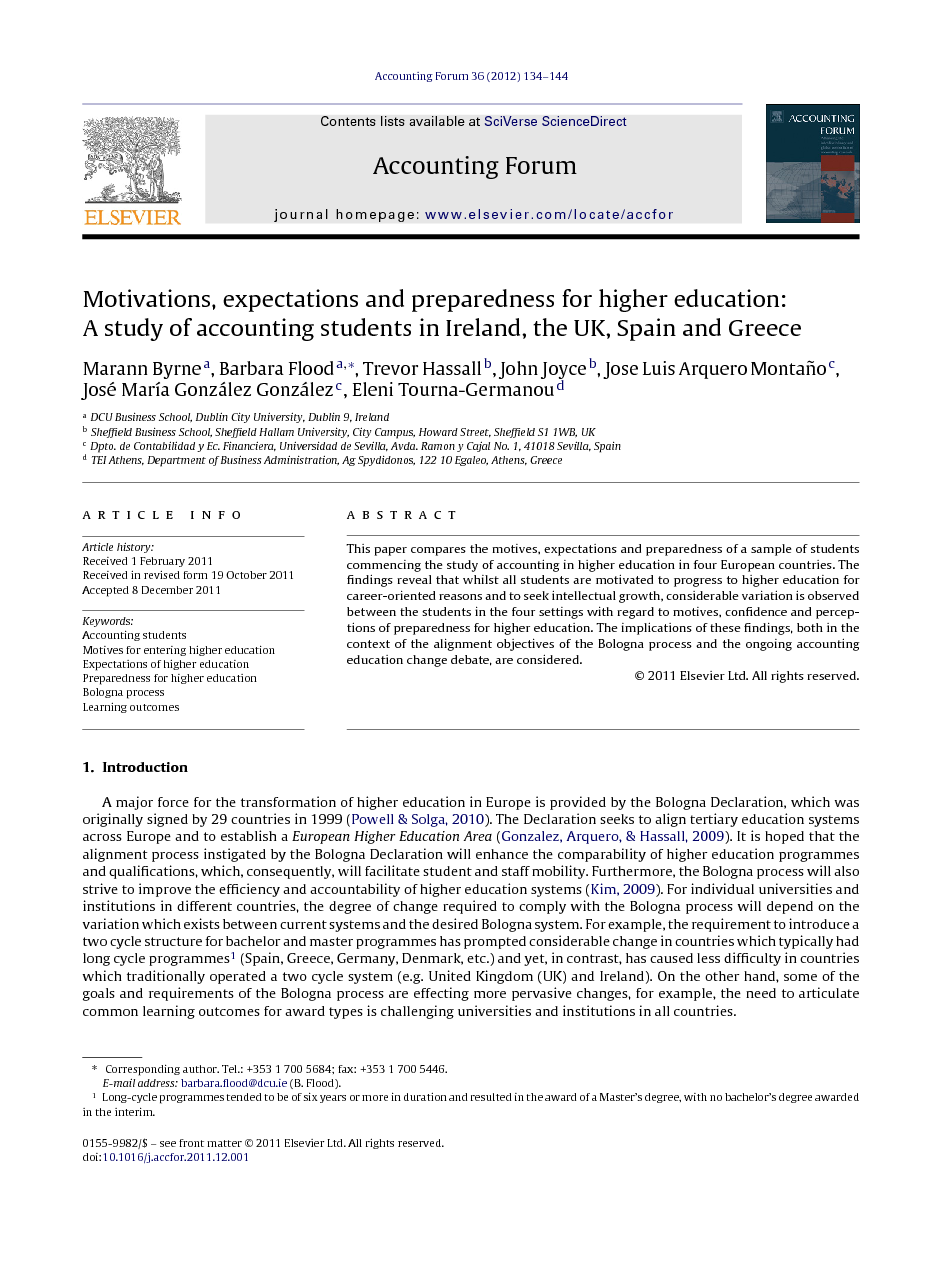 This paper compares the motives, expectations and preparedness of a sample of students commencing the study of accounting in higher education in four European countries. The findings reveal that whilst all students are motivated to progress to higher education for career-oriented reasons and to seek intellectual growth, considerable variation is observed between the students in the four settings with regard to motives, confidence and perceptions of preparedness for higher education. The implications of these findings, both in the context of the alignment objectives of the Bologna process and the ongoing accounting education change debate, are considered.

A major force for the transformation of higher education in Europe is provided by the Bologna Declaration, which was originally signed by 29 countries in 1999 (Powell & Solga, 2010). The Declaration seeks to align tertiary education systems across Europe and to establish a European Higher Education Area (Gonzalez, Arquero, & Hassall, 2009). It is hoped that the alignment process instigated by the Bologna Declaration will enhance the comparability of higher education programmes and qualifications, which, consequently, will facilitate student and staff mobility. Furthermore, the Bologna process will also strive to improve the efficiency and accountability of higher education systems (Kim, 2009). For individual universities and institutions in different countries, the degree of change required to comply with the Bologna process will depend on the variation which exists between current systems and the desired Bologna system. For example, the requirement to introduce a two cycle structure for bachelor and master programmes has prompted considerable change in countries which typically had long cycle programmes1 (Spain, Greece, Germany, Denmark, etc.) and yet, in contrast, has caused less difficulty in countries which traditionally operated a two cycle system (e.g. United Kingdom (UK) and Ireland). On the other hand, some of the goals and requirements of the Bologna process are effecting more pervasive changes, for example, the need to articulate common learning outcomes for award types is challenging universities and institutions in all countries. As the Bologna process is concerned with the alignment of systems and structures in higher education, it is affecting all academic disciplines. However, accounting educators in Europe are also currently challenged by alignment forces emanating from a drive towards a more global accounting profession. The International Accounting Education Standards Board of the International Federation of Accountants (IFAC), now issues education standards which aim both to ‘achieve quality and consistency in global accounting education’ and to provide a ‘benchmark for the development of professional accountants and auditors’ (Needles, 2008, p. 569). Whilst the standards apply directly to professional accountancy bodies which are members of IFAC, they impact on universities and other institutions in those countries where there is interaction between the higher education system and professional qualification/membership. As well as alignment issues, the accounting discipline in higher education is also grappling with the ongoing debate concerning its purpose and its relevance. Indeed, since the 1980s, the accounting profession has questioned the relevance of accounting education provided by universities and other third level institutions and has criticised programmes for failing to keep pace with the changes in accounting practice and for not adequately preparing students to meet the challenges of the professional workplace (e.g. AAA, 1986 and Albrecht and Sack, 2000). On the other hand, critical researchers commonly consider that university accounting programmes spend too much time dancing to the tune of the accounting profession and have prioritised vocational training at the expense of providing a transcendent educational experience (Gray and Collison, 2002 and Tinker and Koutsoumandi, 1997). Also, many critical researchers contend that traditional accounting education develops ‘a narrow, functionalist view of the discipline’ (Boyce, 2004, p. 569) and presents a ‘bland, technical’ approach to the study of accounting (Craig & Amernic, 2002, p. 145) by encouraging students to learn the rules and techniques of accounting practice without consideration of the social context or consequences of those practices (Sikka, Haslam, Kyriacou, & Agrizzi, 2007). This emphasis on technical accounting has resulted in an education process that fails to nurture accounting students as independent, critical thinkers (Gray & Collison, 2002) and ‘it limits the possibility of producing accountants of insight, imagination, creativity and ethical leadership’ (Parker, 2007, p. 46). It is against this background of change and debate that the current study sets about conducting a comparative examination of the motives, expectations and preparedness of accounting students entering higher education in four EU countries, namely Ireland, the UK, Spain and Greece. Specifically, it examines students’ motives for progressing to higher education, their expectations for their studies and their perceptions regarding their preparedness for higher education learning. By examining these issues this study will determine if there is similarity or difference between students in the four countries at the commencement of their studies, thereby identifying opportunities for, or challenges to, the alignment processes. Furthermore, an investigation into students’ motives for progressing to higher education might uncover whether these students are attracted to the study of accounting for career-related outcomes or for intellectual development, which, in turn, may offer a contribution to the debate regarding the vocational versus transcendent objectives of accounting education. It should be made clear that this study is exploratory in nature and is not designed to produce findings generalisable to all accounting students in the four countries. Rather the study seeks to illustrate the complexity of educational alignment processes (whether considering the Bologna process or the demands of the accounting profession) when variation in student factors or attributes are considered. The remainder of the paper is structured as follows. The next section explores the literature concerning motives, expectations and preparedness for higher education. The following section describes the data collection. The results of the study are then presented before the paper concludes by considering the implications of the findings and outlining the limitations of the study.

In light of the ongoing alignment of both tertiary education in Europe and professional accounting education globally, this study set out to examine the motivations, expectations and preparedness of students commencing the study of accounting in higher education in Ireland, the UK, Spain and Greece. Whilst some similarities were identified, the findings reveal some considerable differences between the groups concerning motives, confidence, and perceptions of preparedness for higher education. All of these factors will influence students’ motivation for, and engagement in, the learning process during their degree studies and will consequently impact on the quality of the learning outcomes achieved. As we move towards common degree level learning outcomes across Europe, the challenge for educators is how to best facilitate students, who commence university with such varied motives, expectations and preparedness, to achieve the desired common learning outcomes. There is a clear need for all of us to gain a better understanding of educational processes and practices across countries in Europe and to consider the impact of alignment activities on students’ learning experiences. For accounting education within higher education, the challenges of alignment must also be considered in light of the debate concerning the professional versus critical curriculum. Whilst this study has provided some initial insight into students’ motives and other factors which influence student learning in accounting, ongoing, multi-dimensional research will be needed to inform and shape accounting education within European universities in the years ahead.