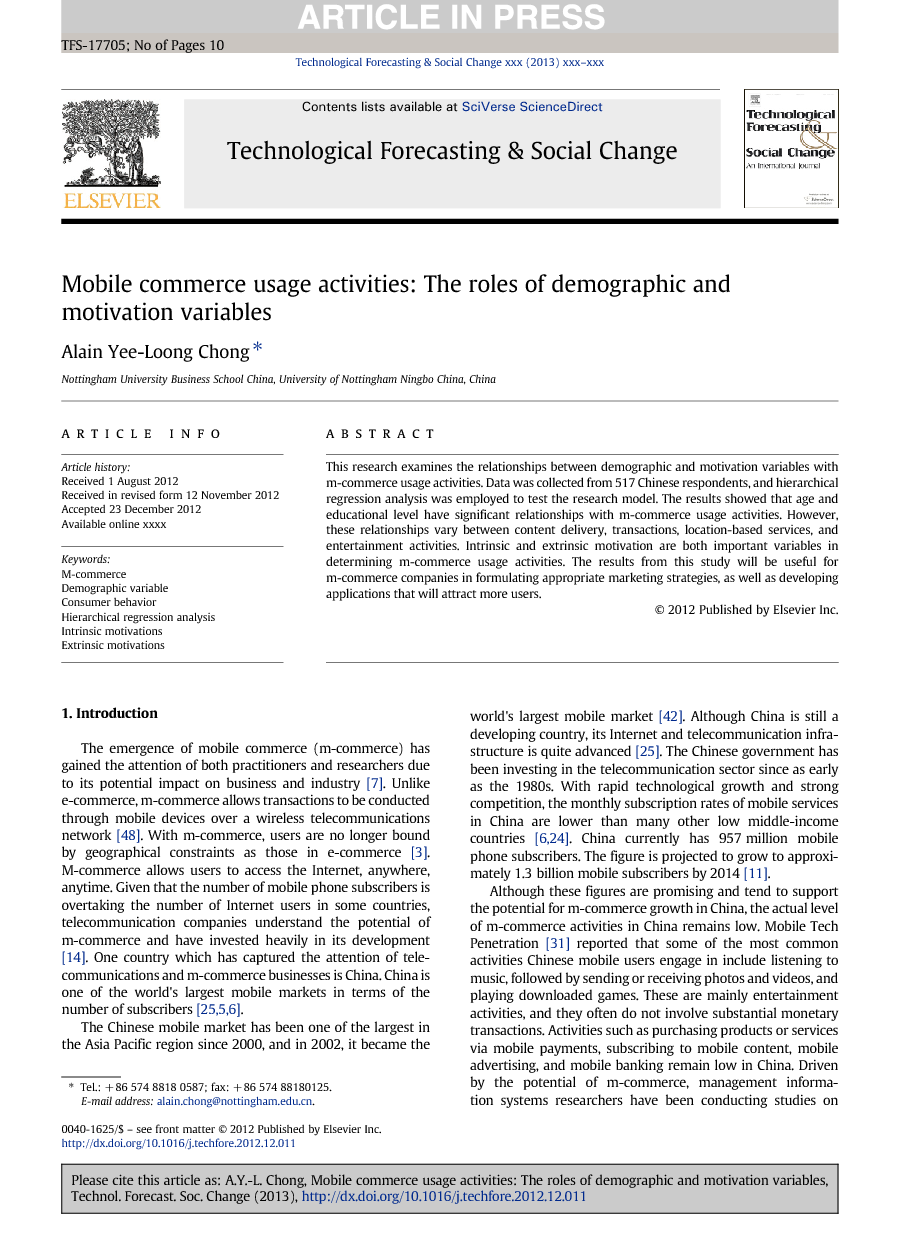 The emergence of mobile commerce (m-commerce) has gained the attention of both practitioners and researchers due to its potential impact on business and industry [7]. Unlike e-commerce, m-commerce allows transactions to be conducted through mobile devices over a wireless telecommunications network [48]. With m-commerce, users are no longer bound by geographical constraints as those in e-commerce [3]. M-commerce allows users to access the Internet, anywhere, anytime. Given that the number of mobile phone subscribers is overtaking the number of Internet users in some countries, telecommunication companies understand the potential of m-commerce and have invested heavily in its development [14]. One country which has captured the attention of telecommunications and m-commerce businesses is China. China is one of the world's largest mobile markets in terms of the number of subscribers [25], [5] and [6]. The Chinese mobile market has been one of the largest in the Asia Pacific region since 2000, and in 2002, it became the world's largest mobile market [42]. Although China is still a developing country, its Internet and telecommunication infrastructure is quite advanced [25]. The Chinese government has been investing in the telecommunication sector since as early as the 1980s. With rapid technological growth and strong competition, the monthly subscription rates of mobile services in China are lower than many other low middle-income countries [6] and [24]. China currently has 957 million mobile phone subscribers. The figure is projected to grow to approximately 1.3 billion mobile subscribers by 2014 [11]. Although these figures are promising and tend to support the potential for m-commerce growth in China, the actual level of m-commerce activities in China remains low. Mobile Tech Penetration [31] reported that some of the most common activities Chinese mobile users engage in include listening to music, followed by sending or receiving photos and videos, and playing downloaded games. These are mainly entertainment activities, and they often do not involve substantial monetary transactions. Activities such as purchasing products or services via mobile payments, subscribing to mobile content, mobile advertising, and mobile banking remain low in China. Driven by the potential of m-commerce, management information systems researchers have been conducting studies on m-commerce in recent years. However, despite the increasing amount of work published on the technological side of m-commerce, research on the strategies and applications of m-commerce remains limited [27] and [34]. There have been a few attempts to investigate the adoption of m-commerce such as those conducted by [50], [1], [52] and [9]. Several observations can be made about existing studies on Internet or m-commerce adoption. Firstly, studies of m-commerce usage among Chinese consumers have been limited. China is an important market as it has one of the largest numbers of mobile phone consumers. Secondly, most of these studies have developed their adoption models based on the Technology Acceptance Model (TAM). These studies have extended the TAM by including additional variables (e.g. Trust, Security). Thirdly, these studies have mainly studied the adoption of m-commerce based on consumers' intention to adopt or not adopt m-commerce. Studies concerning consumers' usage of m-commerce remain sparse. This is a significant research issue that needs to be addressed. As noted above, m-commerce activities in China mainly involve entertainment activities such as sending pictures or listening to music. Classifying various m-commerce activities (e.g. mobile banking, listening to music, mobile payments) under a general category of m-commerce [50], does not reflect the actual usage of m-commerce by consumers. Therefore this research examines the adoption of m-commerce in the context of m-commerce usage activities, instead of consumers' intention to adopt m-commerce. Lastly, most existing m-commerce adoption studies have either neglected using consumer demographic variables in their study [50], or have examined the indirect associations of demographic variables with m-commerce adoption [52]. Demographic variables have been found to have a significant influence on the Internet usage activities of users by [43]. Other variables such as motivation variables have also been found to have an influence on the Internet usage activities by researchers such as [43] and [2]. The direct associations between demographic profiles, together with motivation variables and m-commerce usage activities have not been examined by previous research. In order to bridge the gap in the existing m-commerce adoption literature, this study aims to investigate the relationship between demographic and motivation variables with m-commerce usage activities among Chinese users.

This research demonstrates that demographic and motivation variables in general have significant relationships with m-commerce usage activities. However, one variable that has no relationship with m-commerce activities is the gender of users. This study has several implications. This is one of the first known studies that examines the relationships between demographic and motivation variables with m-commerce usage activities among Chinese users. China is one of the fastest growing m-commerce markets, and a study of Chinese users' behavior will help m-commerce providers to formulate appropriate marketing strategies. When developing m-commerce applications and strategies, it should be noted that users of m-commerce are usually younger users. Accordingly, when designing content, or even transaction-based activities such as purchasing with mobile devices, developers should pay more attention to catering their design considerations for younger users. Young users might have different preferences in terms of, for example, types of music, when compared to older users. Developers should also note that in China, those who are highly educated are more likely to use m-commerce for transactions and location-based services. In order to encourage more users to utilize m-commerce, developers and telecommunication companies might consider increasing awareness of the ease of use of m-commerce, and educating users so that they can understand m-commerce better. M-commerce providers should also focus on ensuring that their applications are easy to use, useful, and at the same time enjoyable. M-commerce applications which fulfill these criteria are more like to attract users to m-commerce. Past studies have focused on m-commerce adoption instead of m-commerce usage activities. M-commerce adoption studies usually investigate how likely users are to use m-commerce [50]. However, such studies often do not indicate the types of m-commerce activities that users engage in. This study has proposed a model based on m-commerce usage activity instead of adoption, and has empirically validated this model. The results from this study also contribute to existing studies by highlighting how different demographic and motivation variables may influence the four m-commerce activities differently.