عنوان انگلیسی
Unraveling the importance of the quantity and the quality of workers’ motivation for well-being: A person-centered perspective
دانلود فوری مقاله + سفارش ترجمه 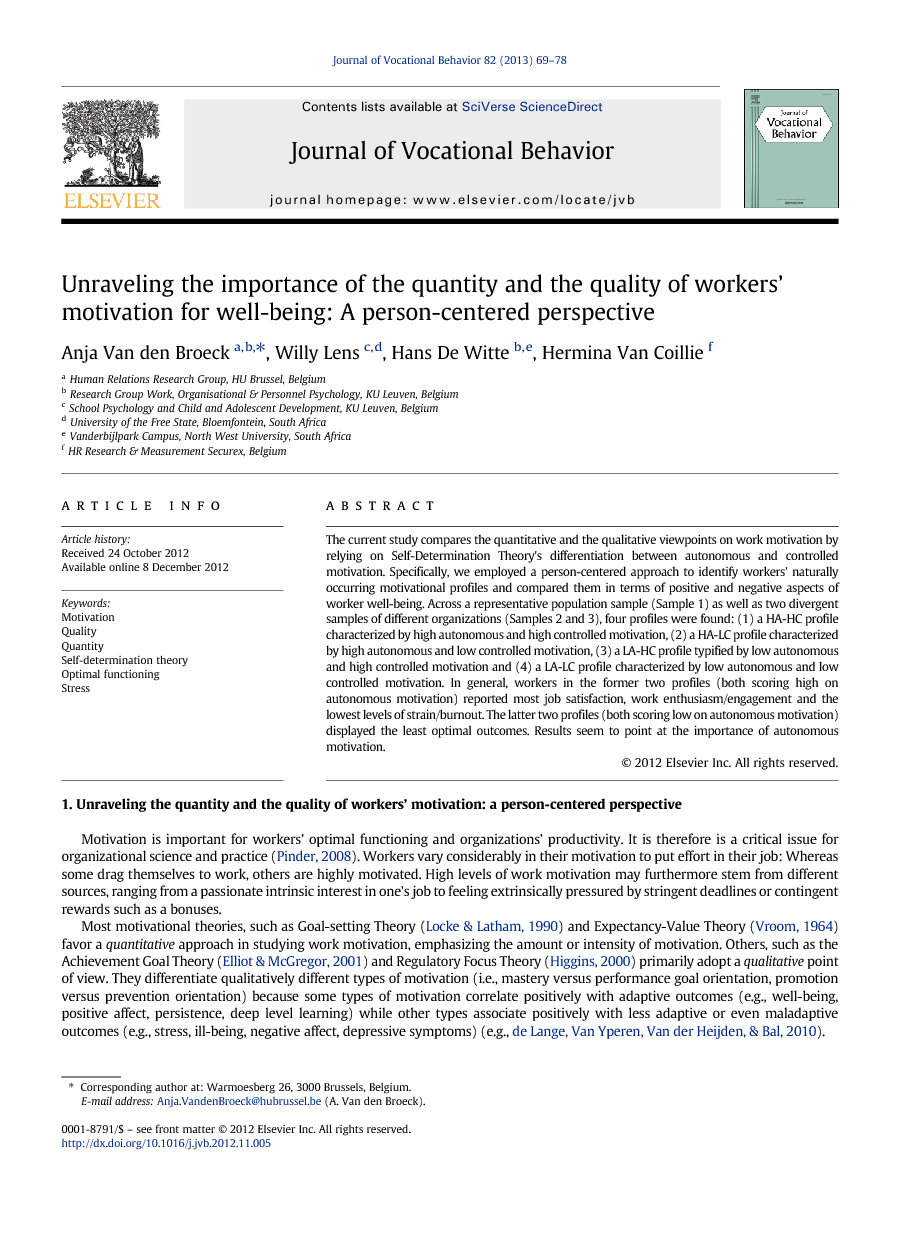 Motivation is important for workers’ optimal functioning and organizations’ productivity. It is therefore is a critical issue for organizational science and practice (Pinder, 2008). Workers vary considerably in their motivation to put effort in their job: Whereas some drag themselves to work, others are highly motivated. High levels of work motivation may furthermore stem from different sources, ranging from a passionate intrinsic interest in one's job to feeling extrinsically pressured by stringent deadlines or contingent rewards such as a bonuses. Most motivational theories, such as Goal-setting Theory (Locke & Latham, 1990) and Expectancy-Value Theory (Vroom, 1964) favor a quantitative approach in studying work motivation, emphasizing the amount or intensity of motivation. Others, such as the Achievement Goal Theory (Elliot & McGregor, 2001) and Regulatory Focus Theory (Higgins, 2000) primarily adopt a qualitative point of view. They differentiate qualitatively different types of motivation (i.e., mastery versus performance goal orientation, promotion versus prevention orientation) because some types of motivation correlate positively with adaptive outcomes (e.g., well-being, positive affect, persistence, deep level learning) while other types associate positively with less adaptive or even maladaptive outcomes (e.g., stress, ill-being, negative affect, depressive symptoms) (e.g., de Lange, Van Yperen, Van der Heijden, & Bal, 2010). The literature provides support for both the qualitative and qualitative views (Pinder, 2008). To date, to the best of our knowledge, research comparing the conflicting assumptions of both perspectives is lacking. The current contribution aims to tap into this issue by relying on Self-Determination Theory (SDT; Deci & Ryan, 2000) which emphasizes that both the quantity and the quality of motivation matter. As such, this study aims to expand the current knowledge on work motivation in three ways. First, by comparing the qualitative and quantitative point of view, we add to the theoretical understanding of work motivation. Second, we shed light on how work motivation would best be approached methodologically. Within a quantitative perspective, all types of motivation are added because, they are all equivalent in value or importance. This assumption runs against the qualitative perspective, in which the differences between various types of motivation are critical. Rather than adding them, lower quality types of motivation are therefore subtracted from more optimal types of motivation to obtain a general score of the quality of motivation (e.g., Pennington & Roese, 2003) or jointly included in the analysis to examine their relative importance and interaction (e.g., Payne, Youngcourt, & Beaubien, 2007). In both cases, the shared variance is controlled for, which, according to the quantitative approach, may lead to a loss of substantive information. To avoid such drawbacks, we rely on a person-centered approach (Magnusson, 1998), i.e., cluster analysis (Gore, 2000), to study the quality and quantity of motivation. A person-centered approach can be contrasted with commonly employed variable-centered approaches such as regression analysis or structural equation modeling. Variable-centered approaches typically break down the complex reality into separate variables. They aim at identifying relationships between independent and dependent variables and assessing the strengths of these relations at the group level. Person-centered approaches may complement this variable-centered approach as they focus upon the experience of individuals (Clatworthy, Buick, Hankins, Weinman, & Horne, 2005). Specifically, cluster analysis allows for the detection and the comparison of naturally occurring groups defined by particular profiles, in our case in terms of the quantity and quality of their work motivation. As such, cluster analysis allows for drawing conclusions on the level of groups of individuals and may assist in identifying which individuals are most at risk for experiencing ill-being such as burnout, or, conversely, are most likely to thrive at work. For practitioners it is easier to recognize and understand groups of people with different profiles as obtained from cluster analysis, than to understand the implications of interaction effects of the dimensions in regression analysis. The current study thus also adds to the practical understanding of work motivation. This is the third contribution of this study. To ascertain the validity of our results, we employ a multi-study approach, testing the hypotheses in a heterogeneous representative sample (Sample 1) as well as two divergent homogeneous samples (Samples 2 and 3). While the representative sample allows identifying the typical worker of each emerging profile and the relative occurrence of the different profiles, the divergent samples also shed light on the universality of the clusters, both across particular organizations and countries, increasing the generalizability of the findings. Before detailing the hypotheses, we discuss the quantitative and qualitative view on motivation based on SDT, as well as the added value of a person centered approach.

This study contributes to the debate on the importance of the quality and the quantity of workers’ motivation. In general, results support a nuanced qualitative view on motivation: Workers thrive more when they value their job and experience interest and enjoyment, that is, when they are autonomously motivated. Such optimal functioning becomes evident, regardless whether such workers feel also controlled by others or themselves to put effort in their job, which seems to nuance previous assumptions within SDT. Workers lacking autonomous motivation are less likely to experience well-being, but future studies are encouraged to further detail the impact of holding controlled motivation compared to no work motivation for various aspects of workers’ functioning.