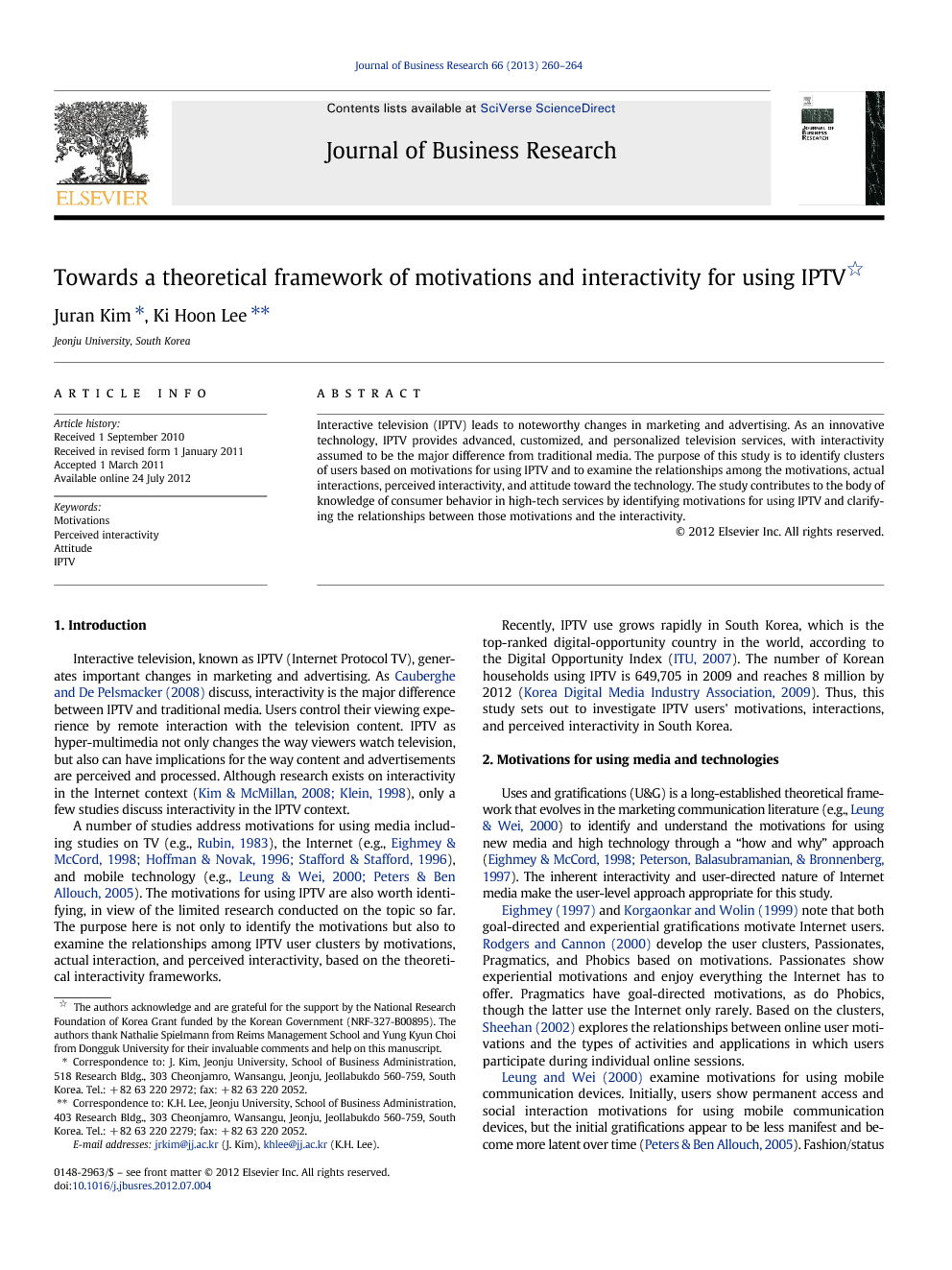 Interactive television (IPTV) leads to noteworthy changes in marketing and advertising. As an innovative technology, IPTV provides advanced, customized, and personalized television services, with interactivity assumed to be the major difference from traditional media. The purpose of this study is to identify clusters of users based on motivations for using IPTV and to examine the relationships among the motivations, actual interactions, perceived interactivity, and attitude toward the technology. The study contributes to the body of knowledge of consumer behavior in high-tech services by identifying motivations for using IPTV and clarifying the relationships between those motivations and the interactivity.

Interactive television, known as IPTV (Internet Protocol TV), generates important changes in marketing and advertising. As Cauberghe and De Pelsmacker (2008) discuss, interactivity is the major difference between IPTV and traditional media. Users control their viewing experience by remote interaction with the television content. IPTV as hyper-multimedia not only changes the way viewers watch television, but also can have implications for the way content and advertisements are perceived and processed. Although research exists on interactivity in the Internet context (Kim and McMillan, 2008 and Klein, 1998), only a few studies discuss interactivity in the IPTV context. A number of studies address motivations for using media including studies on TV (e.g., Rubin, 1983), the Internet (e.g., Eighmey and McCord, 1998, Hoffman and Novak, 1996 and Stafford and Stafford, 1996), and mobile technology (e.g., Leung and Wei, 2000 and Peters and Ben Allouch, 2005). The motivations for using IPTV are also worth identifying, in view of the limited research conducted on the topic so far. The purpose here is not only to identify the motivations but also to examine the relationships among IPTV user clusters by motivations, actual interaction, and perceived interactivity, based on the theoretical interactivity frameworks. Recently, IPTV use grows rapidly in South Korea, which is the top-ranked digital-opportunity country in the world, according to the Digital Opportunity Index (ITU, 2007). The number of Korean households using IPTV is 649,705 in 2009 and reaches 8 million by 2012 (Korea Digital Media Industry Association, 2009). Thus, this study sets out to investigate IPTV users' motivations, interactions, and perceived interactivity in South Korea.