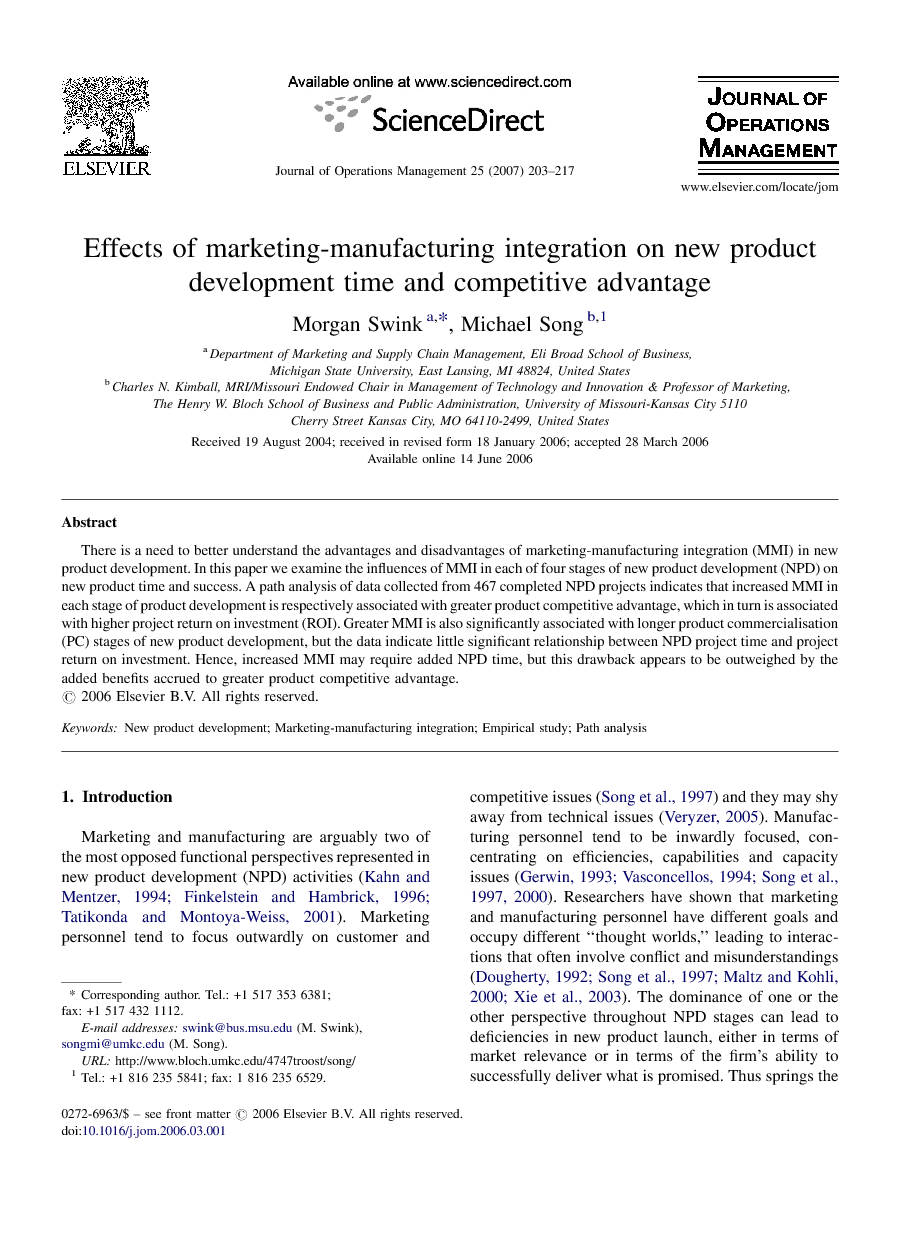 Marketing and manufacturing are arguably two of the most opposed functional perspectives represented in new product development (NPD) activities (Kahn and Mentzer, 1994, Finkelstein and Hambrick, 1996 and Tatikonda and Montoya-Weiss, 2001). Marketing personnel tend to focus outwardly on customer and competitive issues (Song et al., 1997) and they may shy away from technical issues (Veryzer, 2005). Manufacturing personnel tend to be inwardly focused, concentrating on efficiencies, capabilities and capacity issues (Gerwin, 1993, Vasconcellos, 1994, Song et al., 1997 and Song et al., 2000). Researchers have shown that marketing and manufacturing personnel have different goals and occupy different “thought worlds,” leading to interactions that often involve conflict and misunderstandings (Dougherty, 1992, Song et al., 1997, Maltz and Kohli, 2000 and Xie et al., 2003). The dominance of one or the other perspective throughout NPD stages can lead to deficiencies in new product launch, either in terms of market relevance or in terms of the firm's ability to successfully deliver what is promised. Thus springs the argument that marketing and manufacturing strategies and design inputs should be closely integrated throughout the new product development effort. Integration of this sort is thought to lead to improved product design quality. On the other hand, researchers suggest that cross-functional integration is not needed in every NPD stage, and it is not cost free (Adler, 1995, Song et al., 1998, Olson et al., 2001 and O’Leary-Kelly and Flores, 2002). One argument is that early manufacturing inputs can squelch creative ideas (Burns and Stalker, 1961 and Gerwin, 1993). Another argument states that heavy marketing influence can divert attention from technical problems in production ramp-up (Atuahene-Gima and Evangelista, 2000). In this article, we expand on these and other relevant arguments in order to extend the theory describing the effects of marketing-manufacturing integration (MMI) in NPD. We develop and test hypotheses regarding the influences of MMI in each stage of NPD on that stage's length and on the ultimate competitive advantage created in the new product. This study makes several important contributions. First, it fills a void in research. Prior research has focused on overall or multi-dimensional cross-functional integration (e.g., Kahn, 2001; Olson et al., 1995, Ettlie, 1997, Moffat, 1998 and Xie et al., 1998); on marketing-R&D integration (e.g., Gupta et al., 1986, Ruekert and Walker, 1987a and Ruekert and Walker, 1987b; Parry et al., 1993); or on R&D-manufacturing integration (Rubenstein and Ginn, 1985, Ettlie and Reifeis, 1987, Adler, 1995, Ettlie, 1997, Swink, 1999 and Terwiesch et al., 2002), respectively. Much less attention has been given to MMI (Kahn and Mentzer, 1994 and Calantone et al., 2002). Furthermore, most of the extant research is limited in that it concentrates primarily on the technical development (TD) stage of NPD. Little research has been done to study the effects of marketing-manufacturing integration in earlier and latter stages of NPD. The few studies that have addressed the timing of MMI in NPD are limited to business level analysis and/or small samples (Olson et al., 2001 and Song et al., 1998). Another general limitation of prior research is a focus only on the benefits of integration. Few studies have addressed the potential trade-offs associated with integration. Our study examines the potential detrimental influence of MMI on NPD timing as well as its supposed influence on NPD quality. We examine MMI across four major stages of new NPD projects in a large, multi-industry sample. In doing so, we provide a more granulated study of MMI, thus amplifying our understanding of functional roles in NPD and furthering the development of theory explaining new product success. The next section in this article discusses the theoretical underpinnings and the specific hypotheses addressed in this research. The following two sections describe the research methodology employed and the results of the study. The final two sections of the paper discuss the implications of the findings, identifying conclusions and opportunities for future research

In this study we examined one dimension of possible benefit from MMI in NPD, product competitive advantage, and one dimension of possible detriment, project time, with an expectation of a trade-off between the two. While the results of our analysis indicate that MMI is associated with both NPD performance dimensions as expected, the evidence for a trade-off is slight at best. Instead, the results indicate that the influence of MMI on project ROI is much more strongly positive than negative. MMI is strongly associated with greater product competitive advantage, which in turn is a strong driver of ROI. Although MMI is also associated with longer project time, at least in business/market analysis and product commercialization project stages, the impacts of these associations on ROI appear to be negligible. Thus, the total effect of MMI on ROI is strongly positive. We found it interesting that MMI was significantly associated with more project time only in the product commercialization stage. Perhaps MMI requires more time at this stage because marketing and manufacturing are less likely to be collocated in product commercialization activities. Most of the work in product commercialization takes place either in the plant or in the sales field. As a result, meetings and other communications between marketing and manufacturing personnel may be more difficult to arrange, and therefore more time consuming. Another possible explanation is that conflicts might be most difficult to resolve in this stage. The product design and market targets are more concrete at this stage than at any other point in the NPD process. Thus, there are fewer degrees of freedom with which to arrive at compromise solutions that are acceptable to both functional groups. The findings of our research extend those of prior studies, which mostly have concentrated only on the benefits of cross-functional integration, and have not explored the effects of MMI on intermediate performance outcomes at the project level. Our study indicates that product competitive advantage is an important variable that explains why MMI may be linked with greater product success. The findings support the theory that integration leads to greater product design quality, where design quality is a holistic concept comprised of both product performance and conformance attributes. This benefit is apparent in each of the four stages of NPD that we studied, though the direct benefits appear larger in technical development and subsequent stages. Olson et al. (2001) and others argue that MMI typically increases in later stages of NPD primarily because managers tend to view manufacturing representatives as having their chief relevance and competency in later stage activities such as prototyping, process design, and product commercialization (Gerwin, 1993). These activities typically become more intense only after a critical number of product design specifications have been set. However, our results imply that earlier integration efforts may also pay off. It is also in earlier stages that marketing and manufacturing goals are likely to be most in conflict (Song et al., 1998). Dougherty and Heller (1994) maintain that making marketing-manufacturing linkages in NPD requires a complex creative process. Some of this added complexity might explain why MMI is associated with longer stages of product development. However, the added time that is required to process marketing and manufacturing interactions appears to have little serious impact on overall project success. While much has been made of the relationship of NPD time-to-market to project success, there has been curiously little rigorous evidence supporting the claim that faster is better. The results of our study support those who challenge the idea that project completion time is consistently associated with better project success (Meyer and Utterback, 1995, Griffin, 2002 and Kessler and Bierly, 2002). Our data indicate that project length is not a strong driver of ROI. Barriers to effective MMI include an unwillingness of managers to commit integration related resources early to a project (Pisano and Wheelwright, 1995), a shortage of qualified personnel (Calantone et al., 2002 and Gerwin, 1993), and a lack of defined specifications, detailed drawings, and prototypes (Olson et al., 2001). In the case of MMI, difficulties might also stem from differences in language and organizational points of view. Our findings suggest that if barriers such as these can be overcome, improved product competitive advantage can be gained. Thus, the findings argue for the development of early protocols for MMI, and for investments in training and other means for equipping marketing and manufacturing personnel with the skills necessary for them to work together effectively throughout various NPD stages.