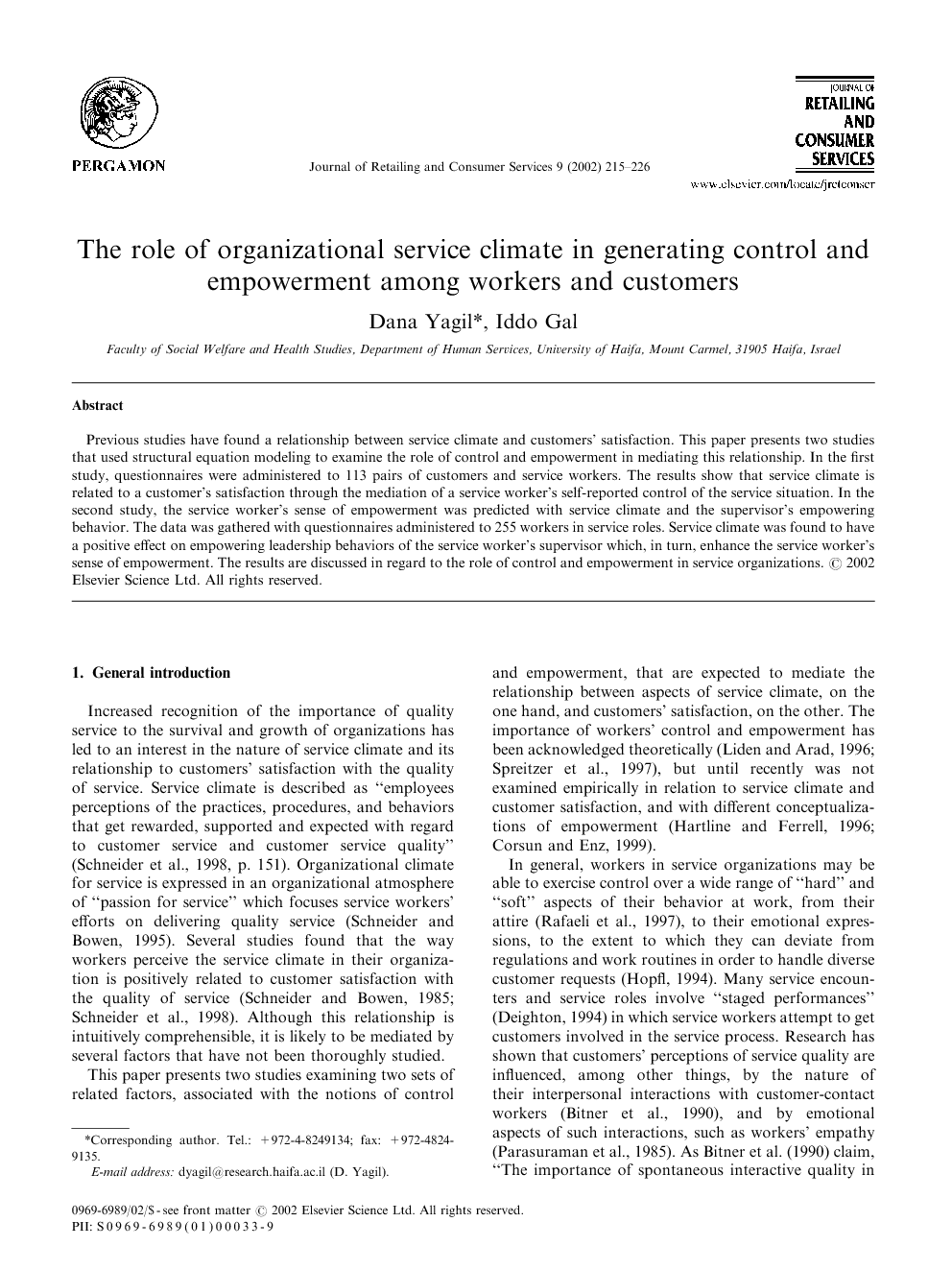 The first study examines workers’ and customers’ perceived control over the service situation in relation to service climate, on the one hand, and customers’ satisfaction with the service, on the other. People are characterized by a desire to maintain control over events (Burger, 1992). More specifically, Basso et al. (1994) distinguish between a general need to control one's physical and social environment and the specific need to control other people. Whereas people differ in their desire for personal control (Burger, 1992), there is evidence for the positive effects of perceived control, especially in regard to coping with stress (for example, Paterson and Neufeld, 1995). In the organizational context, several authors have suggested that workers’ control is essential in service organizations due to the unique characteristics of the service situation. Bowen and Lawler (1992), for example, maintain that service workers should be allowed increased independence in the performance of their jobs when the service organization does not operate in a purely production-line fashion, in which routine encounters with customers are pre-planned and script-based as in the case of some fast-food chains. Schneider and Bowen (1995) suggest that a strong organizational climate is more important in service organizations than in manufacturing organizations. Since service workers frequently operate on their own, face to face with a customer, it is impossible for managers to observe and correct their behavior. Therefore, “in a service business the climate or culture of the work environment must serve as the guide for employees’ behavior” (Schneider and Bowen, 1995, p. 237). Along with a dominant service climate, the unique characteristics of the service role require that the service worker will be authorized to practice self-direction and self-management in a wide range of situations. Since a strong service-oriented organizational climate can substitute some aspects of managerial control of workers’ performance, organizations with a strong service climate are likely to provide service workers with a higher level of personal control. Furthermore, Kelley (1993) implies that a strong organizational culture can point employees towards appropriate means of task performance. A weak service climate, on the other hand, results in a service encounter that is managed through bureaucratic rules reducing workers and customer's perceived control (Bateson, 1985). The relationship between control by workers and customer satisfaction was acknowledged by several authors. For example, Bateson (1985) posits that service workers are better able to satisfy customers’ needs when workers have some control over the service encounter. Indeed, Bitner et al. (1990) found that customers are more satisfied with the service when workers are able to adapt to their special needs and requests. Stewart et al. (1996), studying the performance of service workers, found that training for self-direction improved the performance of low-consciousness employees. The latitude of control in the service situation was found to be important not just for the service worker, but also for the customer. Hui and Bateson (1991) found that customers’ perceived ability to make certain choices in service settings was positively related to their sense of pleasure, and concluded that the perceived control concept can play a significant role in the exploration of ways to create a more pleasant service experience for customers. Van Raaij and Pruyn (1998) provide an attributional explanation for the significance of customers’ being in control: the customer's control over the service, as well as his or her satisfaction with the service, are related to a sense of responsibility; thus, through the effect of self-serving biases, the customer's control is related to the justification of the service engagement as well as to a positive perception of service outcomes. Furthermore, both the service provider and the customer use influence tactics (i.e., ingratiation and assertiveness) to affect the other party's behavior and gain control over the service situation. These means of gaining control are affected by the organizational service climate and, in turn, affect the customer's satisfaction with the service (Yagil, 2001). The relationship between organizational culture and customer satisfaction has been examined with regard to service workers’ perception of their role, skills, and work environment (Klein et al., 1995; Hartline and Ferrell, 1996). In light of the interactive nature of service encounters, the purpose of the first study we conducted was to examine the mediating role of both workers’ and customers’ perceived control of the service situation, on the relationship between the worker's perception of the service climate, on the one hand, and the customer's satisfaction, on the other. The service climate was expected to be positively related to both workers’ and customers’ control of the service situation. Control experienced by both parties was expected, in turn, to be positively related to customers’ satisfaction with the service.