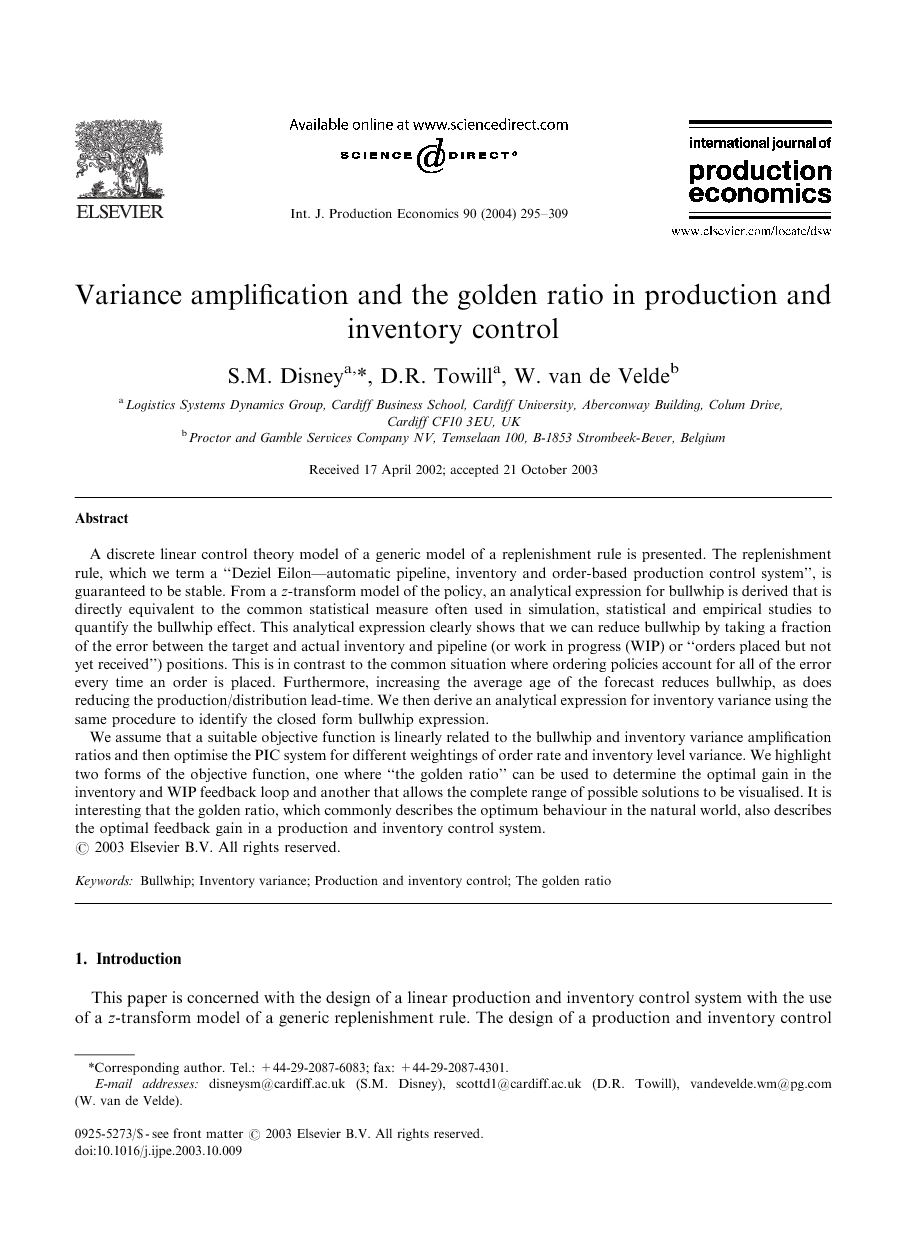 A discrete linear control theory model of a generic model of a replenishment rule is presented. The replenishment rule, which we term a “Deziel Eilon—automatic pipeline, inventory and order-based production control system”, is guaranteed to be stable. From a z-transform model of the policy, an analytical expression for bullwhip is derived that is directly equivalent to the common statistical measure often used in simulation, statistical and empirical studies to quantify the bullwhip effect. This analytical expression clearly shows that we can reduce bullwhip by taking a fraction of the error between the target and actual inventory and pipeline (or work in progress (WIP) or “orders placed but not yet received”) positions. This is in contrast to the common situation where ordering policies account for all of the error every time an order is placed. Furthermore, increasing the average age of the forecast reduces bullwhip, as does reducing the production/distribution lead-time. We then derive an analytical expression for inventory variance using the same procedure to identify the closed form bullwhip expression. We assume that a suitable objective function is linearly related to the bullwhip and inventory variance amplification ratios and then optimise the PIC system for different weightings of order rate and inventory level variance. We highlight two forms of the objective function, one where “the golden ratio” can be used to determine the optimal gain in the inventory and WIP feedback loop and another that allows the complete range of possible solutions to be visualised. It is interesting that the golden ratio, which commonly describes the optimum behaviour in the natural world, also describes the optimal feedback gain in a production and inventory control system.

This paper is concerned with the design of a linear production and inventory control system with the use of a z-transform model of a generic replenishment rule. The design of a production and inventory control (PIC) system is a worthy pursuit as this system is a major contributing factor to the dynamics of, and costs in, a production and/or distribution system. An inappropriately designed PIC system can result in huge fluctuations in the order rate propagating up the supply chain. Recently, academics have termed this phenomenon as the “Bullwhip Effect” ( Lee 1997a and Lee 1997b) and there are many real-world supply chain examples in the literature, for example Holmström (1997) evaluates bullwhip in a retail supply chain. Lee 1997a and Lee 1997b posit that there are five fundamental causes of the bullwhip effect. These are non-zero lead-times, demand signal forecasting, order batching, gaming and promotions. Here we are concerned only with the first two causes. We explicitly neglect the effect of order batching, gaming and special promotions, thus our examinations here may be considered to be of a “lower bound” nature. That is, our bullwhip expressions are to be considered to be their best possible values, to which the other sources are to be added or preferably eliminated at source. This is exactly the same approach as that adopted by Chen et al. (2000) and many other contributions to tackling this problem. The Lee 1997a and Lee 1997b bullwhip papers have become very popular. They clearly state the nature of the problem in a very insightful manner, but somewhat surprisingly they fail to highlight known solutions to the bullwhip problem. These have been known for a very long time: specifically we refer to the work of Deziel and Eilon (1967), Sterman (1989), Wikner et al. (1992), John et al. (1994) although there are numerous other examples, arguably as far back as the work of Magee (1958) and the Nobel prize winner for economics, Herbert Simon (1952). In the past the “non-zero lead-times” and “demand signal forecasting” have been rightly called the Forrester Effect after Forrester (1961) and may be considered to be the fundamental structure of the ordering decision. “Order batching”, has been called the Burbidge Effect (Towill, 1997), after its first prominent investigator. A pragmatic approach to “Gaming” was very elegantly described by Houlihan (1987). The bullwhip effect has received much attention as it creates a business environment that can significantly add unnecessary costs (Metters, 1997). Chen et al. (2000) have recently been using the ratio of the long-term variance of orders (OR) over the long-term variance of demand (D) as a measure of the Bullwhip effect. Note that we consider here the long-term variance ratio, obtained in the limit when time, n, tends to ∞. This metric has been given the name here of the “variance ratio” (VR) and is described by Eq. (1). This metric can be applied to a single ordering decision or echelon in a supply chain (Disney and Towill, 2003) or across many echelons in the supply chain (Dejonckheere et al., 2004). When VROR>1 then we have bullwhip, when VROR<1 then we have smoothing and when VROR=1 we may (but not necessarily so) have a pure order-up-to or “pass-on-orders” policy. We use the subscript to denote the application of the VROR to different parts of the system. For Eq. (1) this is the order rate variance over the demand variance. However, we will also investigate the ratio between the net stock variance and demand, i.e. the inventory variance. In this paper, we will highlight the fact that it is possible to avoid the bullwhip effect as defined by Eq. (1) via the proper design of the production and inventory control system. Our approach draws on control theory and z-transform techniques. Transforms are particularly powerful as they allow the analyst to avoid complicated convolution in the time domain and instead to use simple vector manipulation in the complex frequency domain. There are also a number of fundamental mathematical theorems associated with both the Laplace and the z-transform available for the analyst to draw upon to investigate a particular model, some of which we will exploit here. We have elected to execute our analysis in discrete time because this exactly replicates the conditions of the Beer Game, many operational research models and much of industrial practice. Here, we consider the cause of the class of bullwhip known as the Forrester Effect. We will show that, by slightly altering the way in which we incorporate feedback on inventory levels and work in progress (WIP) into the order being placed, we can actually eliminate the bullwhip problem, i.e. create a supply chain where the variance of the orders placed decreases as the order proceeds up the supply chain. We will also investigate the link between bullwhip and inventory variance. Conceptually, it is convenient to think of inventory variance and order variance as a trade-off. For example, at one extreme, follow demand exactly and hold minimum inventory (that is pass-on-orders) or in the other extreme, absorb the demand fluctuations in inventory and keep a level order rate (that is level schedule). However, because of lead-times, the trade-off is not that simple to evaluate. Furthermore, when placing the order, the best policy may be to absorb some of the fluctuations in inventory and follow some of the variation in demand. We refer to Towill et al. (2001) for a more conceptual discussion on this trade-off.

We have studied a generic PIC system. We selected a subset of a generic replenishment rule with some “nice” mathematical properties that meant that the PIC was guaranteed to be stable. We derived analytical expressions for the bullwhip and inventory variance produced by the PIC system. Analysis of these variance ratios showed us that bullwhip could be avoided with our policy. We have highlighted the bullwhip boundary as a function of the feedback gain, Ti. However, a zero inventory scenario cannot be achieved with our policy. We then assumed that costs in a given setting were a linear function of the variance ratios and proceeded to analyse two forms of the cost function. In the first form a simple weight was given to the bullwhip expression. We then found that the closed form expression for the optimum Ti (“the golden Ti”) that minimises the sum of the weighted variance ratio was of the same form as the Golden ratio. With the second form of cost function we could visualise the complete design space at once, but the closed form was not so elegant. There are clearly many other criteria that could be used to design PIC systems. Immediately obvious ideas are: •Minimising expected costs in the next period by using the variance ratios in probability density functions and assigning costs to inventory holding and backlogs. •Maximising the net present value of the economic consequences of the cash flows through time created by an ordering system. There is a long history of work emanating from Linköping Institute of Technology (Grubbström 1967 and Grubbström 1991) that has observed and exploited the fact that replacing the complex frequency (s or z) with the discount rate (or one plus the discount rate in discrete time) in the transfer function of the cash flow yields the net present value of the cash flow. •Incorporating customer service measures such as availability (or the probability of inventory being available from the shelf at the end of each period) and fill rates (percentage of demand shipped on time) into the bullwhip and inventory variance trade-off. Of course, the natural progression of this paper would be to compare the “Golden Ti” to situations with more complicated and arguably more realistic (but still not necessarily complete) cost functions to test its performance. These ideas will be the subject of future research.