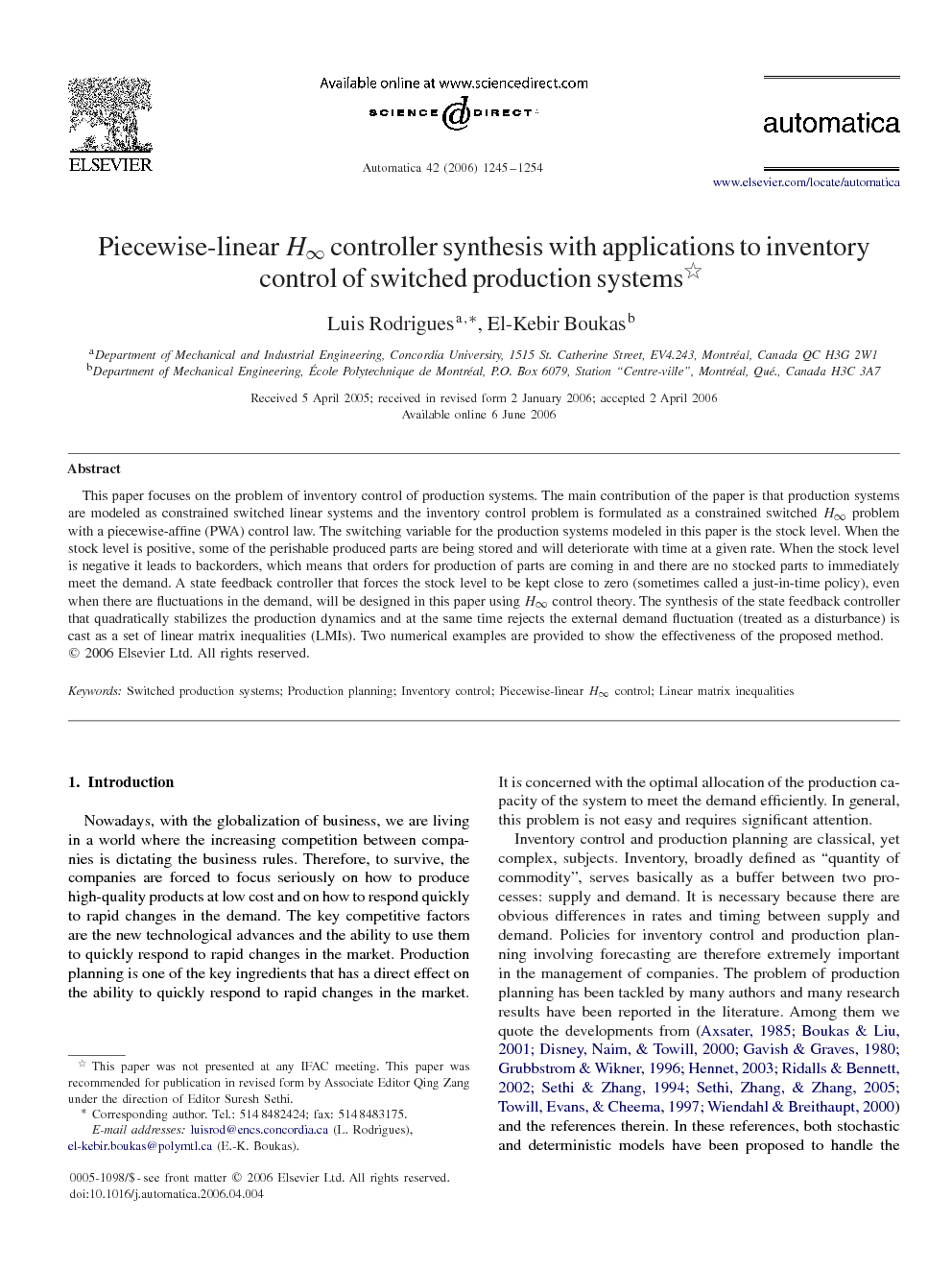 This paper focuses on the problem of inventory control of production systems. The main contribution of the paper is that production systems are modeled as constrained switched linear systems and the inventory control problem is formulated as a constrained switched H∞H∞ problem with a piecewise-affine (PWA) control law. The switching variable for the production systems modeled in this paper is the stock level. When the stock level is positive, some of the perishable produced parts are being stored and will deteriorate with time at a given rate. When the stock level is negative it leads to backorders, which means that orders for production of parts are coming in and there are no stocked parts to immediately meet the demand. A state feedback controller that forces the stock level to be kept close to zero (sometimes called a just-in-time policy), even when there are fluctuations in the demand, will be designed in this paper using H∞H∞ control theory. The synthesis of the state feedback controller that quadratically stabilizes the production dynamics and at the same time rejects the external demand fluctuation (treated as a disturbance) is cast as a set of linear matrix inequalities (LMIs). Two numerical examples are provided to show the effectiveness of the proposed method.

Nowadays, with the globalization of business, we are living in a world where the increasing competition between companies is dictating the business rules. Therefore, to survive, the companies are forced to focus seriously on how to produce high-quality products at low cost and on how to respond quickly to rapid changes in the demand. The key competitive factors are the new technological advances and the ability to use them to quickly respond to rapid changes in the market. Production planning is one of the key ingredients that has a direct effect on the ability to quickly respond to rapid changes in the market. It is concerned with the optimal allocation of the production capacity of the system to meet the demand efficiently. In general, this problem is not easy and requires significant attention. Inventory control and production planning are classical, yet complex, subjects. Inventory, broadly defined as “quantity of commodity”, serves basically as a buffer between two processes: supply and demand. It is necessary because there are obvious differences in rates and timing between supply and demand. Policies for inventory control and production planning involving forecasting are therefore extremely important in the management of companies. The problem of production planning has been tackled by many authors and many research results have been reported in the literature. Among them we quote the developments from (Axsater, 1985, Boukas and Liu, 2001, Disney et al., 2000, Gavish and Graves, 1980, Grubbstrom and Wikner, 1996, Hennet, 2003, Ridalls and Bennett, 2002, Sethi and Zhang, 1994, Sethi et al., 2005, Towill et al., 1997 and Wiendahl and Breithaupt, 2000) and the references therein. In these references, both stochastic and deterministic models have been proposed to handle the production planning and/or maintenance. Different approaches have been used to tackle production planning, such as, dynamic programming, linear programming, queuing theory, and Petri nets. Recently, a new concept of manufacturing and production planning control has emerged based on the availability of radio frequency identifiers (RFID) called auto-id-based control (McFarlane, 2002). This paper models deterministic production systems with switching. The switching corresponds to changes in the stock between two fundamentally different situations: having stocked products and running out of stocked products. In that sense, this work falls under the area of inventory control. It is proposed that the control policy (or decision-making) should also include switching to cope with the switched nature of the system dynamics. Previous research on control theoretic methods applied to production systems has not addressed the case of switched production systems. Moreover, it has been mostly focused on the use of optimal control techniques leading to the solution of the Hamilton–Jacobi–Bellman equation. However, this equation is very hard to solve and numerical solutions can only be obtained for very simplified cases of very low state order. It is also very difficult to include state and control constraints. The solution method presented in this paper will depart considerably from previous research by showing how PWA control theory can be used to handle production planning of constrained switched production systems. The method developed in the paper can easily incorporate state and control constraints and is based on LMIs, which are convex constraints. Therefore, they can be solved very efficiently, scaling very well with the size of the system. To the best of our knowledge the methodology we are using in this paper to formulate and solve the problem has never been used in production planning before. The main contribution of the paper is therefore that production systems are modeled as constrained switched systems and the inventory control problem is formulated as a switched H∞H∞ problem with a PWA control law. The rest of the paper is organized as follows. In Section 2, the production planning problem is described for the case of production of a single part type and the problem assumptions are stated. The main contribution of the paper is presented in Section 3. The inventory control problem is formulated as a switched H∞H∞ control problem posed as an optimization program subject to LMI constraints, which can be solved efficiently using currently available software packages. Section 4 presents two numerical examples to show the effectiveness of the proposed methodology to handle the inventory control problem. The paper then finishes by presenting possible extensions and the conclusions.

This paper dealt with the inventory control problem for a deterministic production system with given deterministic demand rate plus an unknown fluctuating demand rate with finite energy whose bound is known. This problem has been modeled as a control problem of a switched (PWA) system and it has been solved using new results on piecewise-linear H∞H∞ control theory developed in the paper. The proposed approach has shown that switched control theory can be applied to inventory control problems. This model can be extended to include production of multiple parts using multiple machines, each machine producing one part. This can be easily dealt with because a system with multiple (say N) machines, each machine producing one part, is a decoupled system of N subsystems and each of the N subsystems can be solved independently, as presented in this paper. The models presented in this paper deal with deterministic production systems. In practice, these models have some limitations since they do not include some important features such as, for example, breakdown of the machines. After breakdown, there is a no-activity time to get the machine repaired. To overcome this limitation in the model, future work can be aimed at extending it to switched stochastic production systems and to include breakdowns in the machines and even the preventive maintenance or corrective maintenance, as it was done in the literature for non-switched production models. For more details refer to Sethi and Zhang (1994) and Boukas and Liu (2001) and the recent book on stochastic manufacturing systems (Sethi et al., 2005).