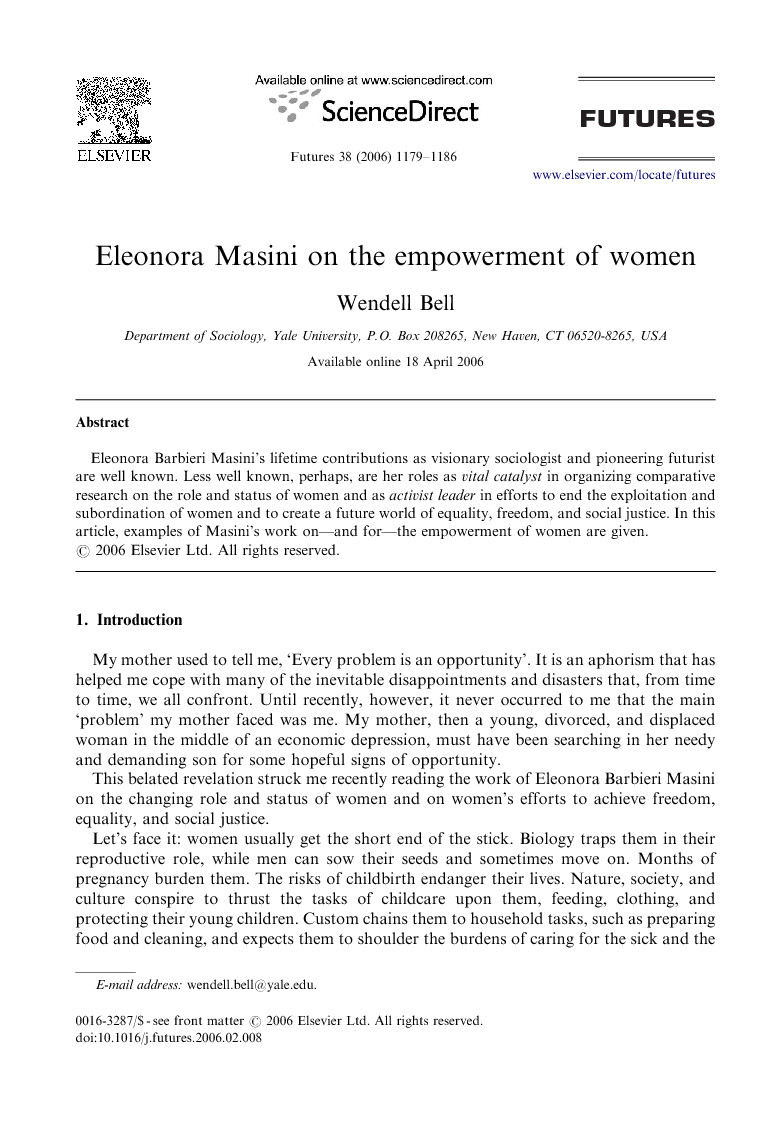 Eleonora Barbieri Masini's lifetime contributions as visionary sociologist and pioneering futurist are well known. Less well known, perhaps, are her roles as vital catalyst in organizing comparative research on the role and status of women and as activist leader in efforts to end the exploitation and subordination of women and to create a future world of equality, freedom, and social justice. In this article, examples of Masini's work on—and for—the empowerment of women are given.

My mother used to tell me, ‘Every problem is an opportunity’. It is an aphorism that has helped me cope with many of the inevitable disappointments and disasters that, from time to time, we all confront. Until recently, however, it never occurred to me that the main ‘problem’ my mother faced was me. My mother, then a young, divorced, and displaced woman in the middle of an economic depression, must have been searching in her needy and demanding son for some hopeful signs of opportunity. This belated revelation struck me recently reading the work of Eleonora Barbieri Masini on the changing role and status of women and on women's efforts to achieve freedom, equality, and social justice. Let's face it: women usually get the short end of the stick. Biology traps them in their reproductive role, while men can sow their seeds and sometimes move on. Months of pregnancy burden them. The risks of childbirth endanger their lives. Nature, society, and culture conspire to thrust the tasks of childcare upon them, feeding, clothing, and protecting their young children. Custom chains them to household tasks, such as preparing food and cleaning, and expects them to shoulder the burdens of caring for the sick and the elderly. Economic change and development, at least in the short run, may add to their burdens as they accept paid jobs in the labor force, which for poor women in developing areas usually means very low wages. Finally, tradition, especially in developing areas, forces women into subservience to men who make many of the decisions that shape their lives. These are some of the issues with which Eleonora Barbieri Masini's work deals. She has what can rightly be called ‘a passionate commitment’ to understand and improve the lives of women. Toward these ends, she has organized empirical social research by women about women in many countries throughout the world. Fully engaging the future, she has promoted social action by encouraging cooperative efforts among international groups of women to bring an end to the exploitation and subordination of women and to work for a future of women's freedom and well-being. And for all humanity, she encourages women to work for a future world of ecological balance, peace, friendship, love, and solidarity among people [1]. In this article, I discuss a few of Masini's contributions to the study of the changing role and status of women as well as some of her efforts to help women take control of their own futures.

As a futurist, I have learned from Eleonora Barbieri Masini's work for more than a quarter century. As a sociologist, I have been most familiar with—and perhaps most influenced by—her efforts to bring futures thinking into sociology and to make sociologists aware of the important relevance of the principles of futures studies to sociological work [15], [16], [17] and [18]. Yet her life's work goes far beyond trying to improve the sociological perspective. It includes many other accomplishments and reveals the many influential roles she has played. She is, e.g., a pioneering futurist, being among the handful of people who began to forge a new field of social inquiry, futures studies, and has continued to contribute as the field has matured and blossomed. She is an organizer and a leader—witness her role, e.g., in the World Futures Studies Federation. She is a scholar, a master teacher, and an activist. Most of all, perhaps, she is a creative visionary who capably works to transform her visions of a better future into social reality. All of these facets of her genius can be seen in her work with and for women. Characteristically, she combines rigorous research on important social issues with plans for action. This can be seen in the studies she organized on the role and status of women and in her efforts to encourage women to take control of their own lives. While, on the one hand, she documents the systematic subordination of women in the past and present, she creates, on the other hand, a vision of a possible and preferable future of more equality, more freedom, and more social justice for women. She works to fulfill the vision by helping to establish an international women's movement of cooperative efforts as one link in a chain leading to a global civil society within which women will be full and equal participants. She promotes solidarity and action among women throughout the world based on their common humanity, shared sorrows, and similar hopes. But her writings are not only for women. Men, as well, can learn from them. For example, they can learn from her universal calls for peace, environmental balance, more spiritual meaning to life, and solidarity among all people. Also, men can learn to see and understand the world—and themselves—through the eyes of women. It is not only a sociologically fuller and more nuanced picture of the social world, but it is also one that encourages men to be more sensitive to the needs and aspirations of women. No doubt some—perhaps many—men view the struggle of women for equality as a problem, as a threat to themselves and their traditional authority and privileges. Well, I know what my mother, were she still alive, would say to them, ‘Look guys, every problem is an opportunity’. It is an opportunity to have more full and satisfying relationships with the women in your life. Especially in your relationship with your wife, take the opportunity to listen to her. Take her hopes and wishes into account. Be an understanding friend, a generous helpmate, and a loyal companion. Work with her to build a lifelong, mutually satisfying joint life based on reciprocity, genuine equality, and consideration for her life choices and personal growth. Take the opportunity to enjoy the satisfactions of a life of mutual love and caring with an equal and autonomous partner. That, my mother would say, is a win–win opportunity, because, if—or when—women lead better lives, boys and men will benefit, too, as women share their enriched selves with them. It is also a message that is fully confirmed by Eleonora Barbieri Masini's work on the empowerment of women.