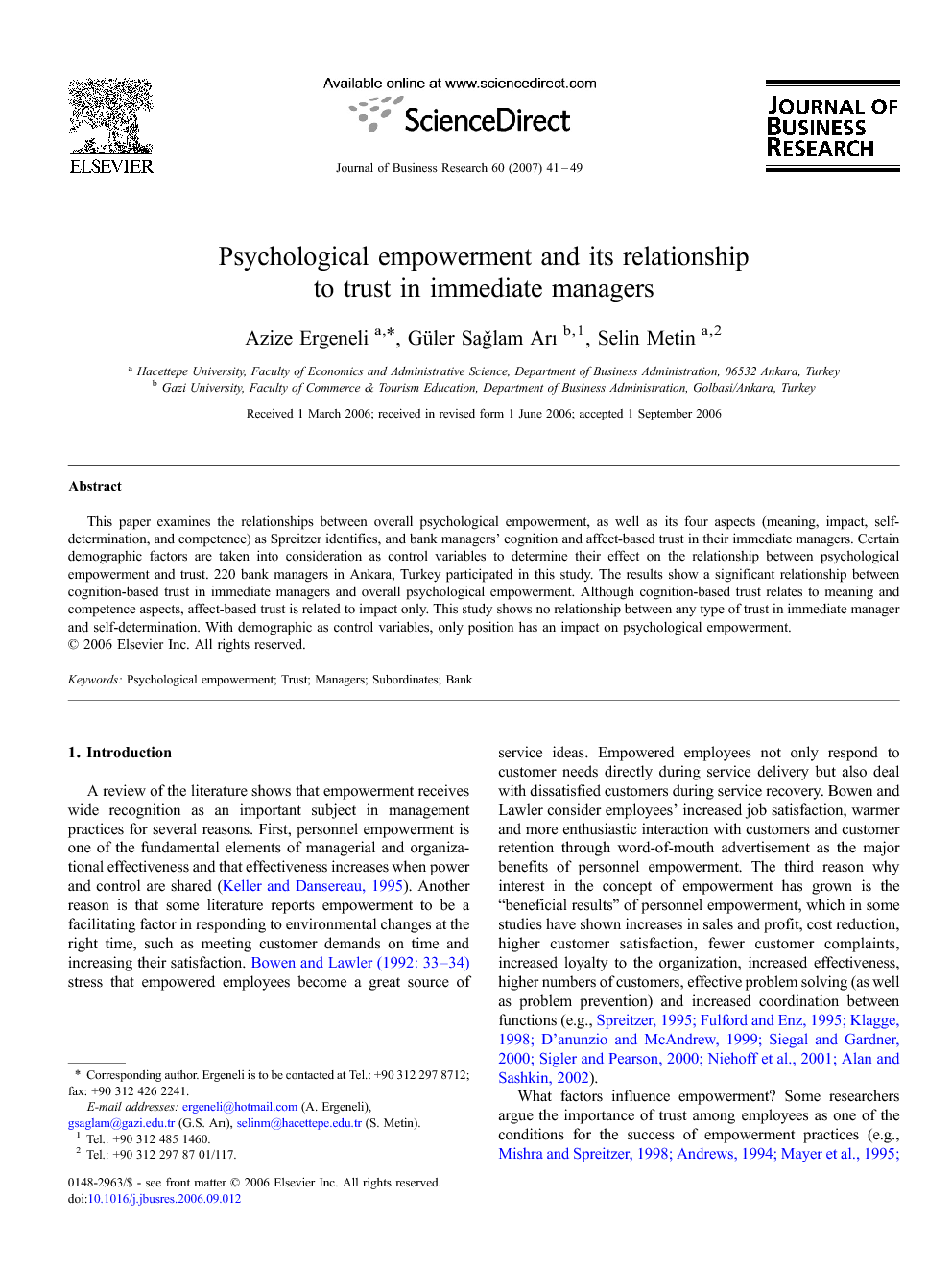 A review of the literature shows that empowerment receives wide recognition as an important subject in management practices for several reasons. First, personnel empowerment is one of the fundamental elements of managerial and organizational effectiveness and that effectiveness increases when power and control are shared (Keller and Dansereau, 1995). Another reason is that some literature reports empowerment to be a facilitating factor in responding to environmental changes at the right time, such as meeting customer demands on time and increasing their satisfaction. Bowen and Lawler (1992: 33–34) stress that empowered employees become a great source of service ideas. Empowered employees not only respond to customer needs directly during service delivery but also deal with dissatisfied customers during service recovery. Bowen and Lawler consider employees' increased job satisfaction, warmer and more enthusiastic interaction with customers and customer retention through word-of-mouth advertisement as the major benefits of personnel empowerment. The third reason why interest in the concept of empowerment has grown is the “beneficial results” of personnel empowerment, which in some studies have shown increases in sales and profit, cost reduction, higher customer satisfaction, fewer customer complaints, increased loyalty to the organization, increased effectiveness, higher numbers of customers, effective problem solving (as well as problem prevention) and increased coordination between functions (e.g., Spreitzer, 1995, Fulford and Enz, 1995, Klagge, 1998, D'anunzio and McAndrew, 1999, Siegal and Gardner, 2000, Sigler and Pearson, 2000, Niehoff et al., 2001 and Alan and Sashkin, 2002). What factors influence empowerment? Some researchers argue the importance of trust among employees as one of the conditions for the success of empowerment practices (e.g., Mishra and Spreitzer, 1998, Andrews, 1994, Mayer et al., 1995, Owen, 1996 and Harari, 1999). A manager's trust in an employee, in particular, may be a prerequisite for the success of empowerment since trust is an attempt to enhance the efficacy of the employee. However, the literature rarely deals with the issue of an employee's trust in a manager and this approach reflects the traditional paradigm, which views trust from the perspective of the manager rather than that of the employee. This study examines the relationships between the individuals' perceptions of psychological empowerment and their cognition and affect-based trust in their immediate managers.