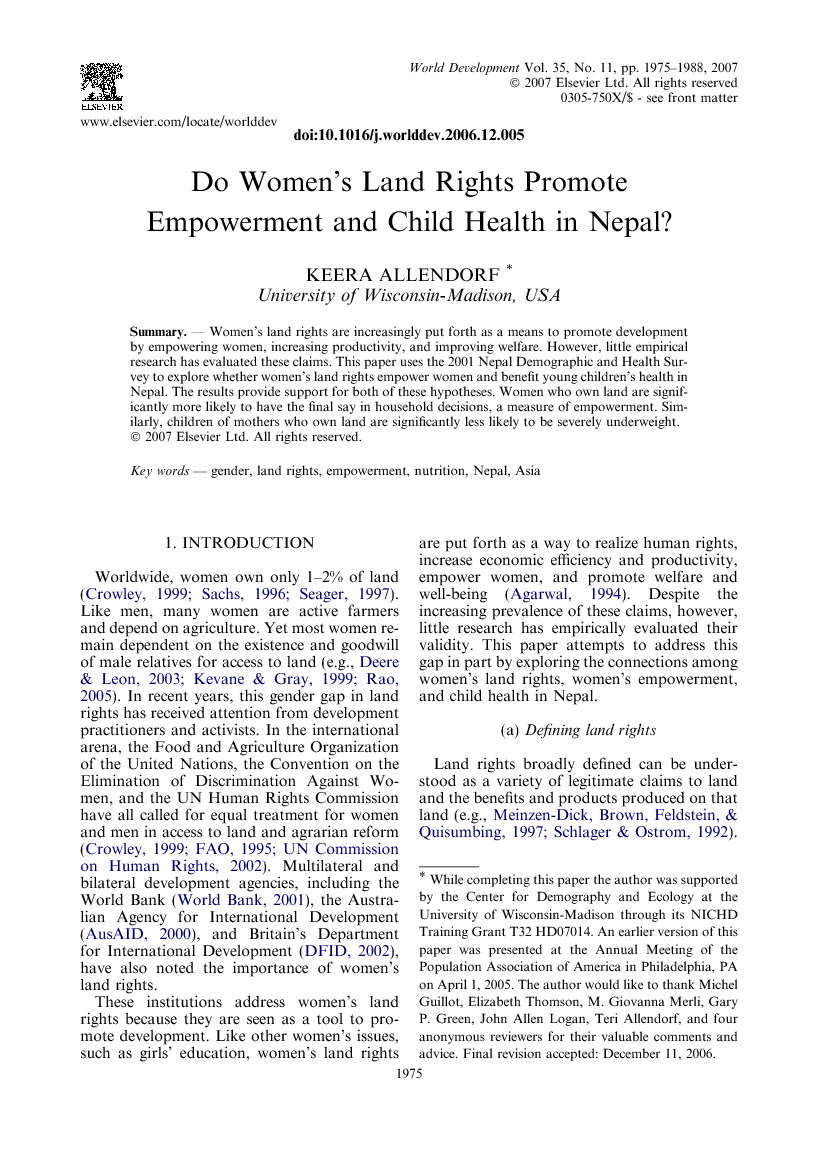 Women’s land rights are increasingly put forth as a means to promote development by empowering women, increasing productivity, and improving welfare. However, little empirical research has evaluated these claims. This paper uses the 2001 Nepal Demographic and Health Survey to explore whether women’s land rights empower women and benefit young children’s health in Nepal. The results provide support for both of these hypotheses. Women who own land are significantly more likely to have the final say in household decisions, a measure of empowerment. Similarly, children of mothers who own land are significantly less likely to be severely underweight.

Worldwide, women own only 1–2% of land (Crowley, 1999, Sachs, 1996 and Seager, 1997). Like men, many women are active farmers and depend on agriculture. Yet most women remain dependent on the existence and goodwill of male relatives for access to land (e.g., Deere and Leon, 2003, Kevane and Gray, 1999 and Rao, 2005). In recent years, this gender gap in land rights has received attention from development practitioners and activists. In the international arena, the Food and Agriculture Organization of the United Nations, the Convention on the Elimination of Discrimination Against Women, and the UN Human Rights Commission have all called for equal treatment for women and men in access to land and agrarian reform (Crowley, 1999, FAO, 1995 and UN Commission on Human Rights, 2002). Multilateral and bilateral development agencies, including the World Bank (World Bank, 2001), the Australian Agency for International Development (AusAID, 2000), and Britain’s Department for International Development (DFID, 2002), have also noted the importance of women’s land rights. These institutions address women’s land rights because they are seen as a tool to promote development. Like other women’s issues, such as girls’ education, women’s land rights are put forth as a way to realize human rights, increase economic efficiency and productivity, empower women, and promote welfare and well-being (Agarwal, 1994). Despite the increasing prevalence of these claims, however, little research has empirically evaluated their validity. This paper attempts to address this gap in part by exploring the connections among women’s land rights, women’s empowerment, and child health in Nepal. (a). Defining land rights Land rights broadly defined can be understood as a variety of legitimate claims to land and the benefits and products produced on that land (e.g., Meinzen-Dick et al., 1997 and Schlager and Ostrom, 1992). When activists and development practitioners call for women’s land rights, however, they are referring to effective land rights, which Agarwal (1994, p. 19) defines as “claims that are legally and socially recognized and enforceable by an external legitimized authorized, be it a village-level institution or some higher-level judicial or executive body of the State.” Ideally, an analysis of women’s land rights should take different aspects of rights into account, including whether women own land and exercise control over land in practice. However, due to data limitations, in this paper women’s land rights are defined simply as land ownership. (b). The Nepali context Land plays a crucial role in Nepal. The country is predominantly rural with over 80% of households directly depending on agriculture and land (Lumsalee, 2002). Since land comprises the main source of economic livelihoods, it is also an important source of power and status in Nepal: “Land is more than a physical entity; it has been, and continues to be, the economic backbone of the agrarian system and the rural power structure” (Bhandari, 2001, p. 168). Women play an important role in farming this land. Some agricultural activities, such as plowing and irrigation, are largely or entirely done by men. However, many other activities, such as fertilizing and transplanting rice, are done by both men and women or women exclusively (Acharya and Bennett, 1981 and Pun, 2000). Furthermore, Nepal is experiencing a feminization of agriculture. Men are increasingly moving into nonagricultural work or migrating to urban areas or outside of Nepal for employment, leaving women to take over agricultural activities (ADB, 1999 and Cameron, 1995). As of 2001, over 90% of women workers were agricultural laborers or land managers compared to 64% of male workers (Nepal Ministry of Health et al., 2002). Despite their active role in agriculture, however, women have limited land rights. In Nepal, the main means of gaining land is through inheritance, which is largely patrilineal. Thus, when discussing land rights and inheritance, women’s rights are usually defined in terms of their relation to men. As reflected in the 11th amendment of the Civil Code, widows have a right to a share in their husband’s property. Daughters, on the other hand, only have a right to a share in their father’s property if they are unmarried. Further, if daughters marry after inheriting parental property they are supposed to return their share to the other heirs. Widows have a relative advantage because they keep property within the same patrilineal line of descent. Daughters, on the other hand, marry into other families and transfer property out of one line of descent and into another. While it is not the norm for Nepali women to own land, there are some women that do. In 2001, 11% of all households and 14% of land owning households in Nepal comprised women landowners (author’s calculations from Nepal Census, 2001a and Nepal Census, 2001b). Many of these landowners are widows who inherited land when their husbands died. However, different ethnic and local inheritance practices also play an important role. Some castes and ethnic groups, especially Tibeto-Burman groups, have more egalitarian inheritance practices and do pass on land to daughters (e.g., Holmberge, 1989, Jones and Jones, 1976, Molnar, 1980 and Watkins, 1996). Some parents also choose to give land to daughters because they have no sons, they have plenty of land to go around, or for other reasons. Additionally, some women who have high paying jobs in urban areas buy land with their own earnings (Shrestha, 2006). It is also increasingly common for couples to register newly purchased property in both the husband and wife’s names (Joshee, 2006). In the last few years, women activists have taken up the issue of women’s equal inheritance rights (e.g., Adhikari, 2001 and Shrestha, 1999). In 1994, a group of activists and lawyers challenged the inheritance law in the Nepali Supreme Court, starting a process that led to the introduction of a bill on inheritance of parental property to parliament (Malla, 1997). In 1998, when parliament failed to discuss the new bill there were demonstrations by women all over the country (ADB, 1999). In 2002, a version of the bill was finally passed as the 11th amendment to the Civil Code.1

While it is increasingly recognized as important, the issue of women’s land rights remains a difficult one. The argument is often made that empowering women, educating girls, and otherwise working to improve women’s situation will ultimately benefit everyone. However, this argument is more difficult in the context of land, a finite resource. In Nepal, as in other countries, there is a clear resistance to women’s equal inheritance rights, a primary means by which they would gain land. The land issue can appear as an intractable case of zero sum game; if women gain independent land rights, men will have to lose land. Thus, the structural quality of land, which places it at the heart of established power relations and makes it such a fundamental source of inequality, is simultaneously the barrier that stands in the way of it being addressed in a meaningful way. Further, the increasing pressure of growing populations on land, resulting land fragmentation, and resistance to women’s inheritance create ambivalence among those who might be even the most avid supporters of women’s land rights. As early as 1981, Acharya and Bennett, 1981 and Acharya and Bennett, 1983 recommended promoting women’s property rights as a key element in promoting the status of women in Nepal. However, citing land fragmentation and the difficulty of the inheritance issue, they stressed that it should be a long-term goal and, instead, emphasized moving women outside the subsistence economy. In the face of such a sensitive and fundamental issue, it is critical to better understand the current and potential impacts of women’s land rights. This analysis provides a rare empirical reflection on the claims that women’s land rights empower women and benefit family welfare. These results show significant associations between women’s land rights, empowerment, and child health. Nepali women who own land are more likely to have the final say in household decisions and their young children are less likely to be severely underweight. These results suggest that, yes, women’s land rights do promote empowerment and child health in Nepal. Further, when comparing different sources of empowerment, land ownership is comparable to education and employment, both of which have received much more attention than land rights. Thus, while land ownership does not appear to be superior to education and employment, it may be just as effective as them. It should further be noted, however, that all of these sources of empowerment are not as influential as women’s place in the family structure in determining women’s decision making power in Nepal. While these findings provide an initial step toward greater understanding with available data, it is clear that much further research is needed to confirm and extend the findings presented here. First, longitudinal studies, or at least retrospective questions, are needed to better capture how women acquire land and how it is connected to the process of empowerment. Are empowered women gaining land or are women landowners becoming empowered or both? Second, it is critical to explore how these relationships may vary across contexts. Apart from different cultural contexts, differences in local inheritance patterns may be crucial. For example, the effects of women’s land rights may differ depending on how the women gained the land and whether women usually have inheritance rights. Finally, it should be reiterated that the current effects of women’s land rights may be quite different from their potential impact. In Nepal, as elsewhere, women landowners are rare and women with effective land rights are even rarer. It is likely that if Nepali women gain land rights in substantial numbers the cumulative and broader effects of these rights on a collective level will palpably differ from the household level effects of the rare individual woman who owns land. Acknowledgements