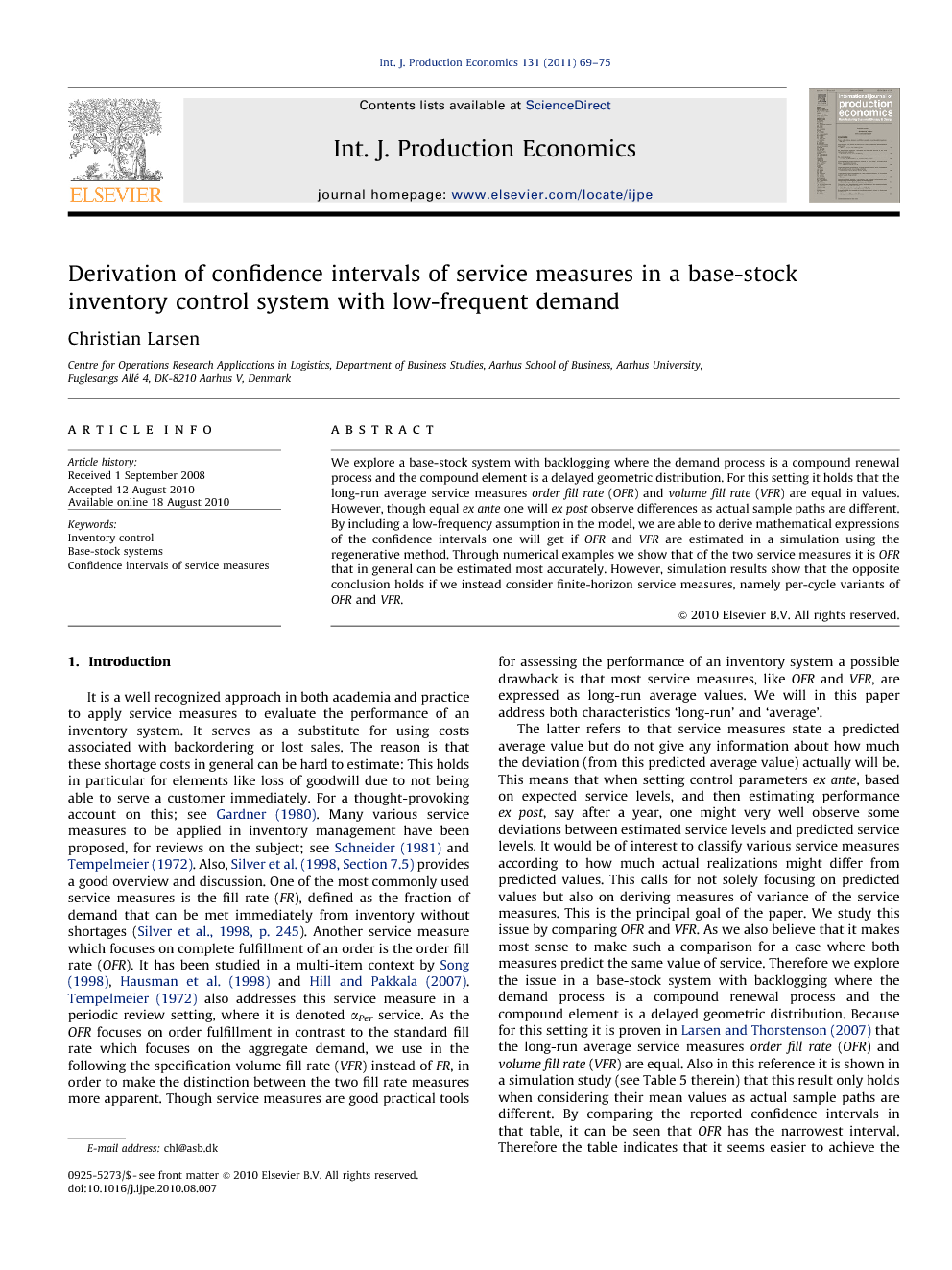 We explore a base-stock system with backlogging where the demand process is a compound renewal process and the compound element is a delayed geometric distribution. For this setting it holds that the long-run average service measures order fill rate (OFR) and volume fill rate (VFR) are equal in values. However, though equal ex ante one will ex post observe differences as actual sample paths are different. By including a low-frequency assumption in the model, we are able to derive mathematical expressions of the confidence intervals one will get if OFR and VFR are estimated in a simulation using the regenerative method. Through numerical examples we show that of the two service measures it is OFR that in general can be estimated most accurately. However, simulation results show that the opposite conclusion holds if we instead consider finite-horizon service measures, namely per-cycle variants of OFR and VFR.

It is a well recognized approach in both academia and practice to apply service measures to evaluate the performance of an inventory system. It serves as a substitute for using costs associated with backordering or lost sales. The reason is that these shortage costs in general can be hard to estimate: This holds in particular for elements like loss of goodwill due to not being able to serve a customer immediately. For a thought-provoking account on this; see Gardner (1980). Many various service measures to be applied in inventory management have been proposed, for reviews on the subject; see Schneider (1981) and Tempelmeier (1972). Also, Silver et al. (1998, Section 7.5) provides a good overview and discussion. One of the most commonly used service measures is the fill rate (FR), defined as the fraction of demand that can be met immediately from inventory without shortages (Silver et al., 1998, p. 245). Another service measure which focuses on complete fulfillment of an order is the order fill rate (OFR). It has been studied in a multi-item context by Song (1998), Hausman et al. (1998) and Hill and Pakkala (2007). Tempelmeier (1972) also addresses this service measure in a periodic review setting, where it is denoted αPer service. As the OFR focuses on order fulfillment in contrast to the standard fill rate which focuses on the aggregate demand, we use in the following the specification volume fill rate (VFR) instead of FR, in order to make the distinction between the two fill rate measures more apparent. Though service measures are good practical tools for assessing the performance of an inventory system a possible drawback is that most service measures, like OFR and VFR, are expressed as long-run average values. We will in this paper address both characteristics ‘long-run’ and ‘average’. The latter refers to that service measures state a predicted average value but do not give any information about how much the deviation (from this predicted average value) actually will be. This means that when setting control parameters ex ante, based on expected service levels, and then estimating performance ex post, say after a year, one might very well observe some deviations between estimated service levels and predicted service levels. It would be of interest to classify various service measures according to how much actual realizations might differ from predicted values. This calls for not solely focusing on predicted values but also on deriving measures of variance of the service measures. This is the principal goal of the paper. We study this issue by comparing OFR and VFR. As we also believe that it makes most sense to make such a comparison for a case where both measures predict the same value of service. Therefore we explore the issue in a base-stock system with backlogging where the demand process is a compound renewal process and the compound element is a delayed geometric distribution. Because for this setting it is proven in Larsen and Thorstenson (2007) that the long-run average service measures order fill rate (OFR) and volume fill rate (VFR) are equal. Also in this reference it is shown in a simulation study (see Table 5 therein) that this result only holds when considering their mean values as actual sample paths are different. By comparing the reported confidence intervals in that table, it can be seen that OFR has the narrowest interval. Therefore the table indicates that it seems easier to achieve the pre-specified service level target by using the OFR service measure. As can be seen later this preliminary observation gets confirmed in this paper. It is difficult mathematically to derive higher order moments of service measures. However, by including a low-frequency assumption into the base-stock model, we are able to derive a measure of the variance of the two service measures. Specifically, we derive mathematically the confidence interval of OFR and VFR if these are estimated in a simulation by the regenerative method. The assumption about low-frequency is often coined intermittent in the literature see the seminal paper by Croston (1972). This intermittent behaviour of the demand (or lumpiness) is often encountered for inventories of spare parts where base-stock policies in general are recommended; see for instance Feeney and Sherbrooke (1966), Ward (1978), Schultz (1987) and Smith and Dekker (1997). Also, base-stock policies are often used in the retail sector, Hill and Pakkala (2007). The other characteristic mentioned above: ‘long-run’ refers to that in principle the performances of the inventory concerns an infinite time horizon. The study of finite-horizon service measures has not received much attention in the literature. There are some analyses of the finite-horizon volume fill rate service measure in Chen et al. (2003) and Thomas (2005) however for very special cases. Also the minimal service level constraints studied in Chen and Krass (2001) can be interpreted as a finite-horizon volume fill rate service measure. In the paper we also explore what happens if we instead of long-run average service measures look at per-cycle service measures (denoted respectively OFRCycle and VFRCycle); these can be considered a sort of finite-horizon service measure. As these measures are harder to analyze mathematically we use here simulation. Our simulation experiments show that for a given base-stock parameter, the per-cycle service levels are higher than their long-run counterparts. This result is in accordance with Chen et al. (2003), which prove their result under more restrictive assumptions. Furthermore, of the two per-cycle service measures, it is VFRCycle that can be estimated most accurately. In Section 2 we first give mathematical derivations of the service measures OFR and VFR. These derivations explicitly exploit the low-frequency assumptions and therefore appear as alternative derivations compared to Larsen and Thorstenson (2007). Then in Section 3 we mathematically derive the confidence intervals of our service measures. In Section 4 we present numerical examples from which it can be concluded that it in general it is OFR that can be estimated most accurately compared to VFR and that it is VFRCycle that can be estimated most accurately compared to OFRCycle. Finally, Section 5 contains some concluding remarks.

The principal goal of the paper is to analyze which service measure that ex post will deviate least from its ex ante prediction. The paper provides a mathematical derivation of the length of the confidence intervals that one will get if the (long-run average) service measures order fill rate (OFR) and volume fill rate (VFR) are estimated in a simulation by using the regenerative method. Based on numerical experiments, our conclusion is that of the two service measures it is OFR that most often can be estimated most accurately, as its confidence interval is the narrowest. As a by-product of the main analysis we have also collected data on the per-cycle variants of OFR and VFR, denoted OFRCycle and VFRCycle, respectively. Here it turns out that it is VFRCycle that can be estimated most accurately. This is of course interesting that such different conclusion holds whether a long-run or a short term focus is exercised. However some logic explanation for this is provided in the paper. A crucial element in the mathematical analysis is the low-frequency assumption (1). So it could be interesting to explore what happens to the result when this assumption is relaxed. It could also be interesting to examine under which conditions one could make mathematical derivations, in the same spirit as in this paper, on the variation of OFRCycle and VFRCycle that one would encounter ex post.