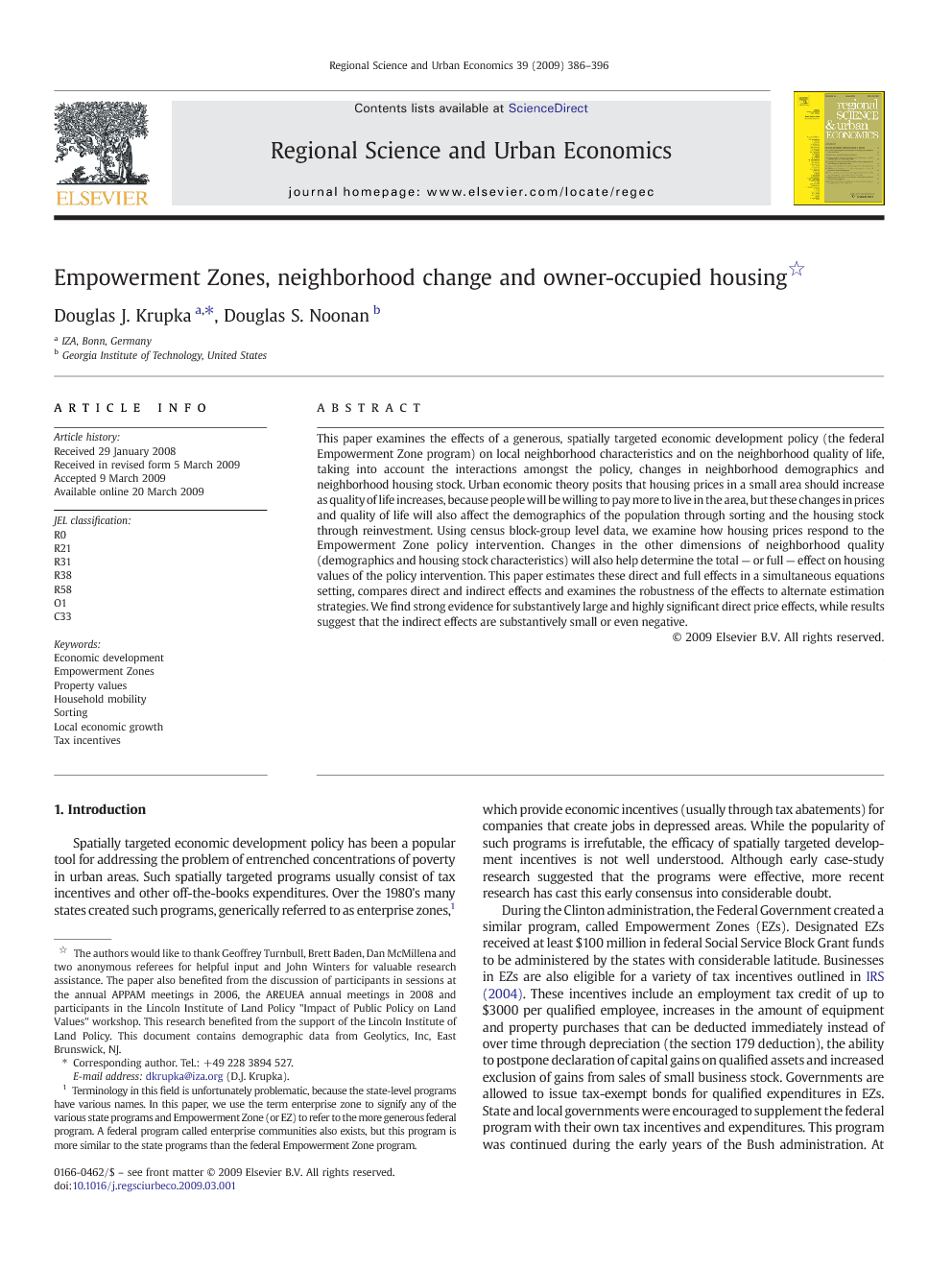 This paper examines the effects of a generous, spatially targeted economic development policy (the federal Empowerment Zone program) on local neighborhood characteristics and on the neighborhood quality of life, taking into account the interactions amongst the policy, changes in neighborhood demographics and neighborhood housing stock. Urban economic theory posits that housing prices in a small area should increase as quality of life increases, because people will be willing to pay more to live in the area, but these changes in prices and quality of life will also affect the demographics of the population through sorting and the housing stock through reinvestment. Using census block-group level data, we examine how housing prices respond to the Empowerment Zone policy intervention. Changes in the other dimensions of neighborhood quality (demographics and housing stock characteristics) will also help determine the total — or full — effect on housing values of the policy intervention. This paper estimates these direct and full effects in a simultaneous equations setting, compares direct and indirect effects and examines the robustness of the effects to alternate estimation strategies. We find strong evidence for substantively large and highly significant direct price effects, while results suggest that the indirect effects are substantively small or even negative.

Spatially targeted economic development policy has been a popular tool for addressing the problem of entrenched concentrations of poverty in urban areas. Such spatially targeted programs usually consist of tax incentives and other off-the-books expenditures. Over the 1980's many states created such programs, generically referred to as enterprise zones,1 which provide economic incentives (usually through tax abatements) for companies that create jobs in depressed areas. While the popularity of such programs is irrefutable, the efficacy of spatially targeted development incentives is not well understood. Although early case-study research suggested that the programs were effective, more recent research has cast this early consensus into considerable doubt. During the Clinton administration, the Federal Government created a similar program, called Empowerment Zones (EZs). Designated EZs received at least $100 million in federal Social Service Block Grant funds to be administered by the states with considerable latitude. Businesses in EZs are also eligible for a variety of tax incentives outlined in IRS (2004). These incentives include an employment tax credit of up to $3000 per qualified employee, increases in the amount of equipment and property purchases that can be deducted immediately instead of over time through depreciation (the section 179 deduction), the ability to postpone declaration of capital gains on qualified assets and increased exclusion of gains from sales of small business stock. Governments are allowed to issue tax-exempt bonds for qualified expenditures in EZs. State and local governments were encouraged to supplement the federal program with their own tax incentives and expenditures. This program was continued during the early years of the Bush administration. At present, the EZ initiative covers over 700 census tracts with a combined population of over 3 million individuals in 31 communities (Greenbaum and Bondonio, 2004). Although the generosity of the program has varied over time, total incentives and grant expenditures are valued at over $5 billion, according to the Department of Housing and Urban Development (HUD, 2009). Despite the extent of the program, the literature on the effects of the EZ program is relatively undeveloped compared to the literature on state enterprise zone programs. In this paper, we examine the effects of the federal program over a wide variety of neighborhood-level indicators. We focus on the total effect of the Empowerment Zone intervention on home values, which likely includes not only direct effects but also several types of indirect effects. This approach conceives of neighborhood outcomes as the result of a complicated interplay between economic, demographic and housing market forces. Recent researchers have had trouble finding significant direct effects of spatially targeted economic development programs. By identifying both the direct effects and the indirect effects, our approach offers EZ status its “best chance” to show some positive effect on neighborhood quality. Our results show that for our preferred measure of neighborhood quality (housing values) EZ status appears to have had statistically significant and substantial positive effects. The effects of EZ status on other neighborhood characteristics are more mixed. The indirect effects vary somewhat depending on specification and estimation method, but are generally either small or negative. The rest of the paper is organized as follows. Section 2 reviews the literature on state and federal spatially targeted economic development incentives. Section 3 lays out a conceptual foundation for our empirical section, discusses the empirical specification and describes the data. Section 4 presents and discusses the results. Section 5 concludes.

This paper has examined the effects of a very generous economic development policy: the federal Empowerment Zone program. This program offers the best chance to find positive effects of spatially targeted economic development policies because federal tax incentives and direct federal investment are added on top of state and local tax incentives. This paper contributes to the literature because it is one of the first attempts to explicitly account for the complex, interacting processes which generate neighborhood measures like home values, demographic characteristics and housing stock characteristics. While the equations we estimate are admittedly reduced form, the system of equations approach allows for a much richer picture of neighborhood outcomes to emerge. Although studies of state enterprise zones have struggled to find significant effects, we find a sizeable and significant positive effect on home values and varying effects on other outcomes of interest. The significance and size of these effects are probably explained by the generosity of the federal program, along with better measurement of program status because of the close matching of EZ boundaries with census geographies. The indirect effects of EZ status on home prices through the other endogenous variables appear to be either extremely small or actually perverse. These results fit well into the existing literature on spatially targeted economic development programs. The recent literature on state programs (e.g. Bondonio and Greenbaum, 2007), which rely completely on tax incentives, has shown them on net to be ineffective. Moreover, the developing literature on the effects of the federal program (Oakley et al., 2006, Oakley and Tsao, 2007a and Oakley and Tsao, 2007b) finds generally unimpressive effects of the intervention on neighborhood indicators other than price. The results in this paper suggest that the federal grants are able to affect local quality of life with complex and not generally positive net effects on other neighborhood attributes. We believe that these results raise questions about what the federal Empowerment Zone program has accomplished and how. The strong positive direct effect suggests that the program is working, perhaps through improved amenities (better services, lower crime, better infrastructure or better access to employment). Another possibility is that the positive increase in price represents a composition effect. Density decreases in EZ neighborhoods. A possible interpretation is that federal money is being spent to knock down low-value homes, increasing the median value in a neighborhood. Such an intervention would provide little beneficial neighborhood revitalization and so we see the non-price effects of the program are extremely mixed. While this is possible, the sheer size of the EZ1 effect makes it unlikely that this is the only explanation. Some recent work by Lynch and Zax (in press) on the state program in Colorado suggests that some of the increased real estate prices could come through increased demand for commercial real estate (in order to gain access to program benefits) driving up the price of residential property. This interpretation is also adopted by Landers (2006) for Ohio's state program and Hanson (2008) in the context of the federal program. We find the positive spill-over effects and the scattered beneficial non-price effects of the program to be evidence suggestive that something more than simple capitalization of benefits to businesses has transpired in these neighborhoods, although these effects certainly do not preclude this interpretation. Another aspect worth examining is program heterogeneity. While this paper has concentrated on the average effect of the policy intervention, Oakley and Tsao (2006) show that there is some heterogeneity across Empowerment Zones in terms of the non-price effects of the program. This is to be expected since the actual policy intervention in each zone would differ according to the zone's administration, goals and strategies. Whether differences in policy outcomes are correlated with differences in the policy implementation in a sensible way is an interesting question. The identification strategy used here would not be appropriate for such an examination. Further work might also be done on the indirect effects of EZ status on the other variables. Two variables of interest are the family labor market variable and the poverty rate. Both are targets of the program and have been hypothesized to have positive externality effects in neighborhoods. The Empowerment Zone program seemed to have conflicting effects on these variables (increasing working families and poverty simultaneously). However, several other variables affected by the EZ program also affected labor market success and poverty outcomes, so the full effects might differ markedly from the direct effects of the program and may be more consistent across neighborhood characteristics. Spatially targeted economic development programs are an important feature in the landscape of social policy in America. Because much of the cost of these programs is off the books, they are popular. The suite of policies at local, state and federal levels creates considerable variation in the intensiveness of these interventions. Considerable effort has been and will continue to be directed towards understanding the effects of these policies and what works. To that end, this paper can be seen as adding to the literature in examining the effects of a very generous program. At the same time, these policy-induced variations in taxes and expenditures represent an opportunity to examine the forces affecting neighborhood change along a host of measurable dimensions. From that perspective, the differences in results across programs (state, federal) and across dimensions (price, non-price) offer insight into neighborhood dynamics and the workings of the various housing sub-markets in metropolitan areas.