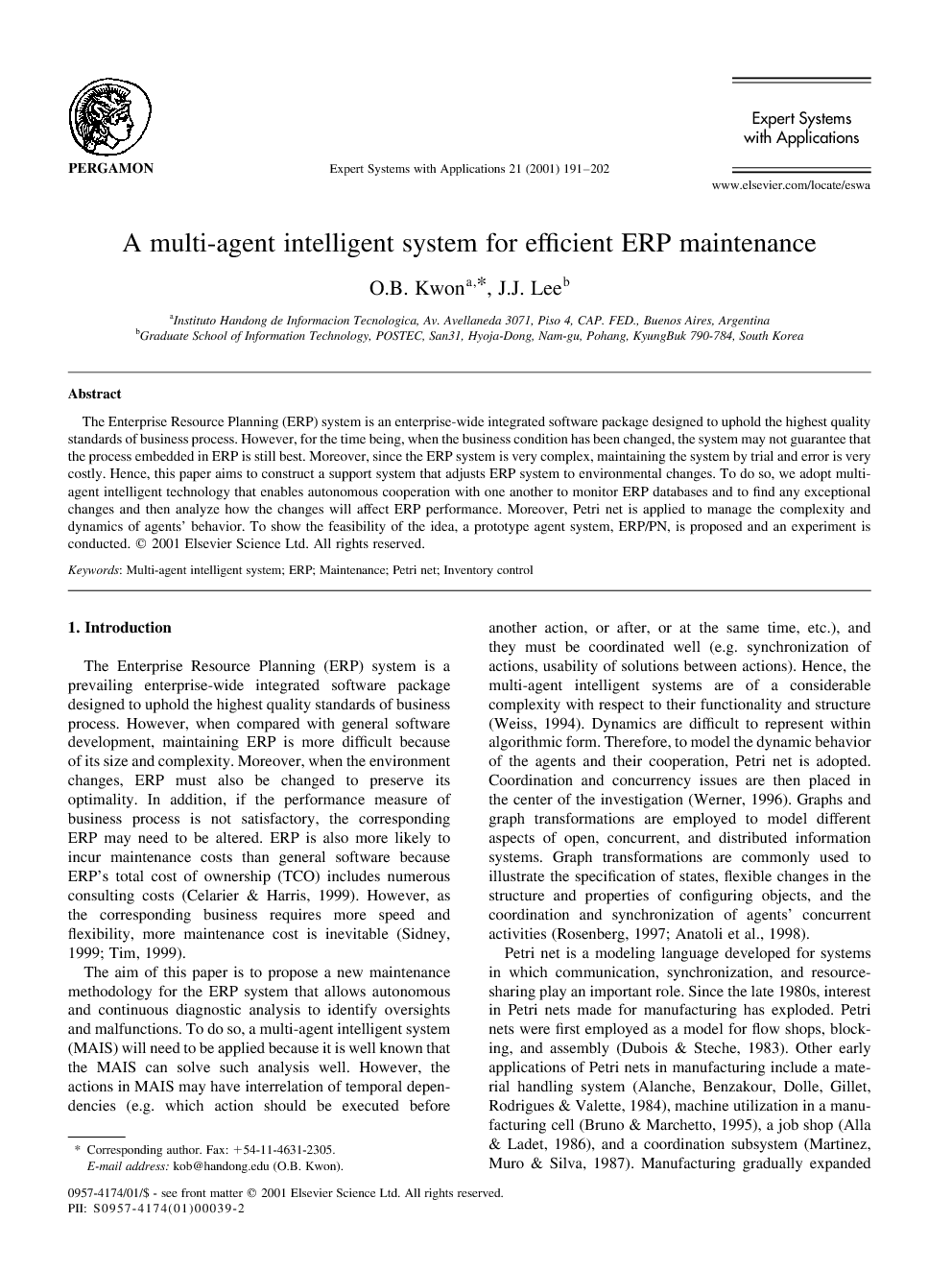 The Enterprise Resource Planning (ERP) system is an enterprise-wide integrated software package designed to uphold the highest quality standards of business process. However, for the time being, when the business condition has been changed, the system may not guarantee that the process embedded in ERP is still best. Moreover, since the ERP system is very complex, maintaining the system by trial and error is very costly. Hence, this paper aims to construct a support system that adjusts ERP system to environmental changes. To do so, we adopt multi-agent intelligent technology that enables autonomous cooperation with one another to monitor ERP databases and to find any exceptional changes and then analyze how the changes will affect ERP performance. Moreover, Petri net is applied to manage the complexity and dynamics of agents’ behavior. To show the feasibility of the idea, a prototype agent system, ERP/PN, is proposed and an experiment is conducted.

The Enterprise Resource Planning (ERP) system is a prevailing enterprise-wide integrated software package designed to uphold the highest quality standards of business process. However, when compared with general software development, maintaining ERP is more difficult because of its size and complexity. Moreover, when the environment changes, ERP must also be changed to preserve its optimality. In addition, if the performance measure of business process is not satisfactory, the corresponding ERP may need to be altered. ERP is also more likely to incur maintenance costs than general software because ERP's total cost of ownership (TCO) includes numerous consulting costs (Celarier & Harris, 1999). However, as the corresponding business requires more speed and flexibility, more maintenance cost is inevitable (Sidney, 1999 and Tim, 1999). The aim of this paper is to propose a new maintenance methodology for the ERP system that allows autonomous and continuous diagnostic analysis to identify oversights and malfunctions. To do so, a multi-agent intelligent system (MAIS) will need to be applied because it is well known that the MAIS can solve such analysis well. However, the actions in MAIS may have interrelation of temporal dependencies (e.g. which action should be executed before another action, or after, or at the same time, etc.), and they must be coordinated well (e.g. synchronization of actions, usability of solutions between actions). Hence, the multi-agent intelligent systems are of a considerable complexity with respect to their functionality and structure (Weiss, 1994). Dynamics are difficult to represent within algorithmic form. Therefore, to model the dynamic behavior of the agents and their cooperation, Petri net is adopted. Coordination and concurrency issues are then placed in the center of the investigation (Werner, 1996). Graphs and graph transformations are employed to model different aspects of open, concurrent, and distributed information systems. Graph transformations are commonly used to illustrate the specification of states, flexible changes in the structure and properties of configuring objects, and the coordination and synchronization of agents’ concurrent activities (Rosenberg, 1997; Anatoli et al., 1998). Petri net is a modeling language developed for systems in which communication, synchronization, and resource-sharing play an important role. Since the late 1980s, interest in Petri nets made for manufacturing has exploded. Petri nets were first employed as a model for flow shops, blocking, and assembly (Dubois & Steche, 1983). Other early applications of Petri nets in manufacturing include a material handling system (Alanche, Benzakour, Dolle, Gillet, Rodrigues & Valette, 1984), machine utilization in a manufacturing cell (Bruno & Marchetto, 1995), a job shop (Alla & Ladet, 1986), and a coordination subsystem (Martinez, Muro & Silva, 1987). Manufacturing gradually expanded into a large-scale enterprise task, requiring the use of advanced modeling techniques. The Petri net model was adopted to represent the agents’ behavior, regarding autonomous response and cooperation according to various events, because it naturally expresses system dynamics (Mu, 1997). In particular, the model represents dynamic behavior within a transition matrix that describes the relationships between a discrete event and corresponding activities. Petri net also has useful analysis algorithms that have been rigorously tested and verified by graph theory. For instance, the safety analysis informs one in advance of a deadlock situation. Reachability graphs are used to analyze how effectively the agents behave. Furthermore, Petri nets may provide useful information by enabling one to forecast, control, and optimize the agent. Once the agents are modeled with Petri net, the performance analysis is extremely reliable. The success of the quantitative and qualitative analyses performed by Petri net has been proven for more than 40 years. In general, the ERP maintenance system is made up of a collection of loosely coupled multi-agent intelligent systems, in which the behavior is mapped via the Petri net. The dual structure was developed as a prototype system. This paper will consider the multi-agent architecture of ERP maintenance in correspondence with a Petri net (ERP/PN). It will address maintenance issues of the ERP system, the architecture of a multi-agent intelligent agent represented as the Petri net model, and the experimental design and subsequent results of an inventory control module. The rest of this paper is organized as follows. In Section 2, some maintenance issues of ERP system are described, and the concept of intelligent agent is mentioned in Section 3. Architecture of intelligent agent with Petri net is proposed in Section 4. Section 5 describes an experimental design and results of an inventory control module of ERP system. Finally, Section 6 gives conclusions with possibilities for future research.

This paper proposes a multi-agent intelligent system architecture for adaptive inventory control in an ERP system maintenance. Since the behavior of agents is highly complex and dynamic, a Petri net is adopted to model the ERP system. In our architecture, to alleviate the ERP maintenance efforts, a three-layered structure was proposed. The behavior of inter- and intra-agent layers is represented as a Petri net to illustrate the dynamics of agents and the controlling behavior of relevant multiple agents. This enables the proposed maintenance system to inspect how the designed agent architecture would be and to control the ERP system, determining which agent mechanism will be more useful. Although the presented idea focuses on a design of intelligent agent architecture for ERP maintenance, full implementation should be established for more realistic results. There are still many factors to consider to commercially connect the agent system to legacy ERP packages, but the modularity and extendibility of the agent-based system may be suitable for increasing reusability and, hence, productivity. We are now extending the methodology to every module involved in ERP system.