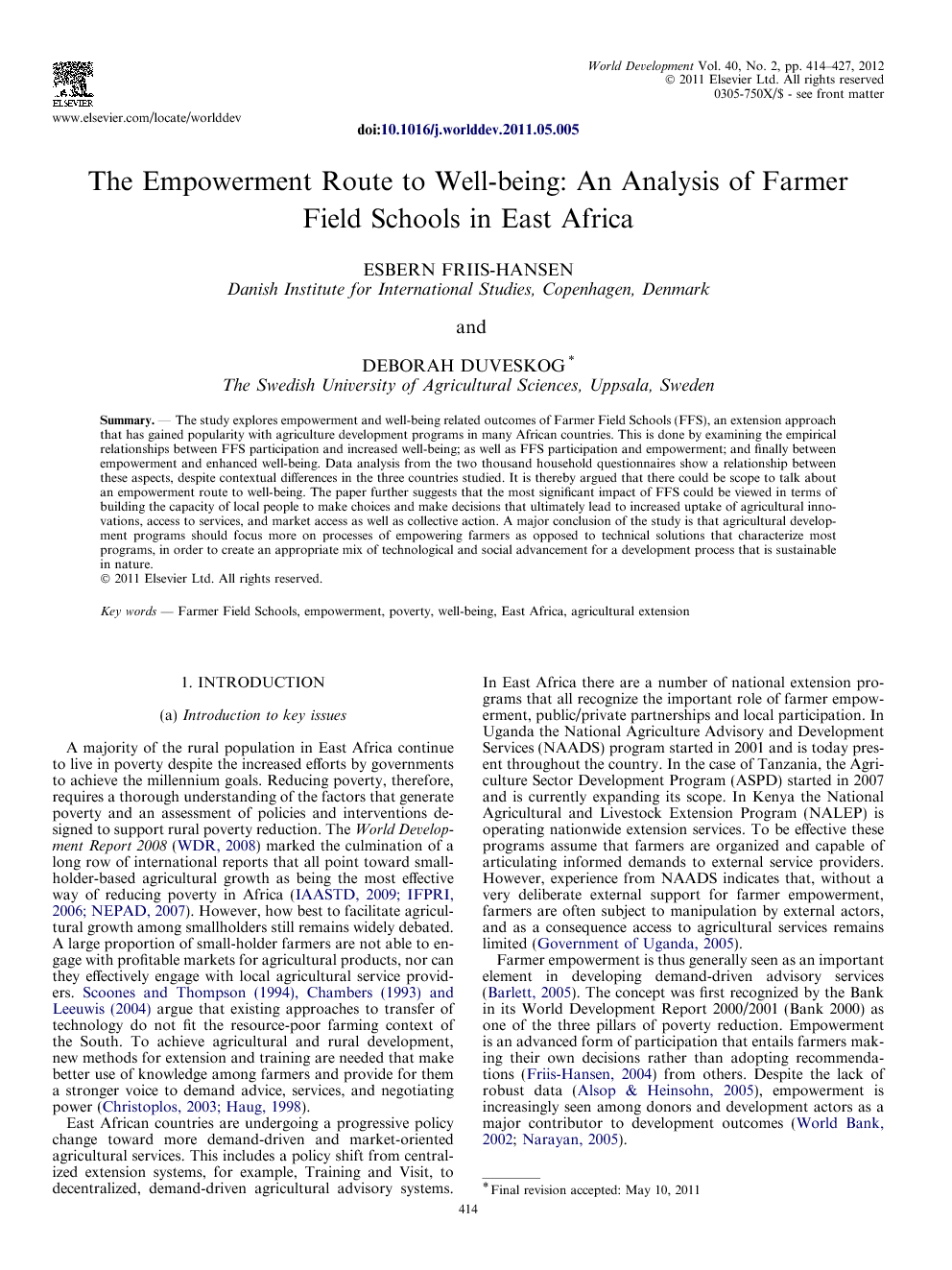 The study explores empowerment and well-being related outcomes of Farmer Field Schools (FFS), an extension approach that has gained popularity with agriculture development programs in many African countries. This is done by examining the empirical relationships between FFS participation and increased well-being; as well as FFS participation and empowerment; and finally between empowerment and enhanced well-being. Data analysis from the two thousand household questionnaires show a relationship between these aspects, despite contextual differences in the three countries studied. It is thereby argued that there could be scope to talk about an empowerment route to well-being. The paper further suggests that the most significant impact of FFS could be viewed in terms of building the capacity of local people to make choices and make decisions that ultimately lead to increased uptake of agricultural innovations, access to services, and market access as well as collective action. A major conclusion of the study is that agricultural development programs should focus more on processes of empowering farmers as opposed to technical solutions that characterize most programs, in order to create an appropriate mix of technological and social advancement for a development process that is sustainable in nature.

The study confirms the hypothesis that group-based learning in FFS can lead to empowerment and act as a pathway toward increased well-being. The fact that the data from the three countries all point toward the same trend, despite contextual differences in the countries studied, strengthens this finding, and justifies making generalized conclusions about a possible empowerment route to well-being. The hypothesis was tested by examining three sets of relationships: FFS and empowerment, FFS and enhanced well-being, and empowerment and well-being, as well as by using two types of data: farmer’s perceptions, and actual expressions of empowerment. The link between FFS participation and empowerment in terms of both perceptions and expressions of power in everyday life was very apparent in Kenya and to certain extent in Uganda and Tanzania as well. All countries showed linkages between innovation uptake and increased access to services and FFS membership. Kenya, however, was the only country that also showed significant differences between the two groups in the aspects of engagement with markets, collective action, and social relations. At the individual level, FFS showed significant impacts across the countries on changes in gender, trust, critical thinking, and household decision-making capacity, which is in line with a more qualitative study of FFS in Kenya (Duveskog, Friis-Hansen, & Taylor, in press). This study also confirms that high quality of the training that fosters the process of empowerment is crucial. Loss of quality when scaling up processes of empowerment is well recognized in the critical participation literature (Cooke, 2001 and Parkinson, 2009). However, it should be noted that power and influence beyond the individual or household domain on the community level did not demonstrate a strong relationship with FFS, apart from an increase in leadership positions among FFS graduates, particularly in Kenya. This study demonstrates a relationship between the FFS learning process and poverty levels. In all three countries, FFS graduates proved less poor than their fellow community members. It was also shown that typical FFS members were not significantly different from the average community member in terms of the well-being indicators studied here. This strengthens the conclusion of dependence between FFS participation and increased well-being. The links between empowerment and poverty are less clear than the relationships described above. Possibly this indicates that the relationship is a complex one with many additional factors influencing the dependency between the two aspects looked at in this study. However, the study results still produce some interesting findings on this issue. With some exceptions, the factors of perceptions of and attitudes to power do not show a significant link to poverty level: that is, the less poor do not perceive themselves to have more power in their household or their community than the very poor. However, when looking at actual expressions of empowerment in terms of innovation uptake, access to services, engagement with markets, and involvement in collective action, etc., a clear link between poverty level and these variables was observed in all three countries. The study is not able to determine the reasons for this contradiction. However, possible explanations could be that the very poor, if or when excluded from decision-making processes and social engagement, do not perceive power as a problem, thus giving a higher score in the study than the real situation. On the other hand, when starting to engage in and push for a change in the household or community, the non-poor might encounter more challenges and obstacles in terms of power relations and, therefore, rate their level of power lower than the real situation. The reason could also simply be that feelings of power, including the aspects of self-confidence and trust, etc., are not related to poverty levels, but are individual attributes that cross-cut well-being categories. It is also important to remember that the poverty-rating syntax in this study is based mainly on indicators of assets and standards of living and does not include more physiologically related items such as feelings of power in everyday life. Though the direct link between empowerment indicators and well-being appearing weak in the study, the fact that the links between FFS participation and both empowerment and well-being indicators are strong, the authors still feel confident to support the concept of an empowerment route to well-being. Further research, that take into account a greater number of external factors in the institutional, social, and political context is needed to un-pack the complexity and inter-connectedness between empowerment and well-being.