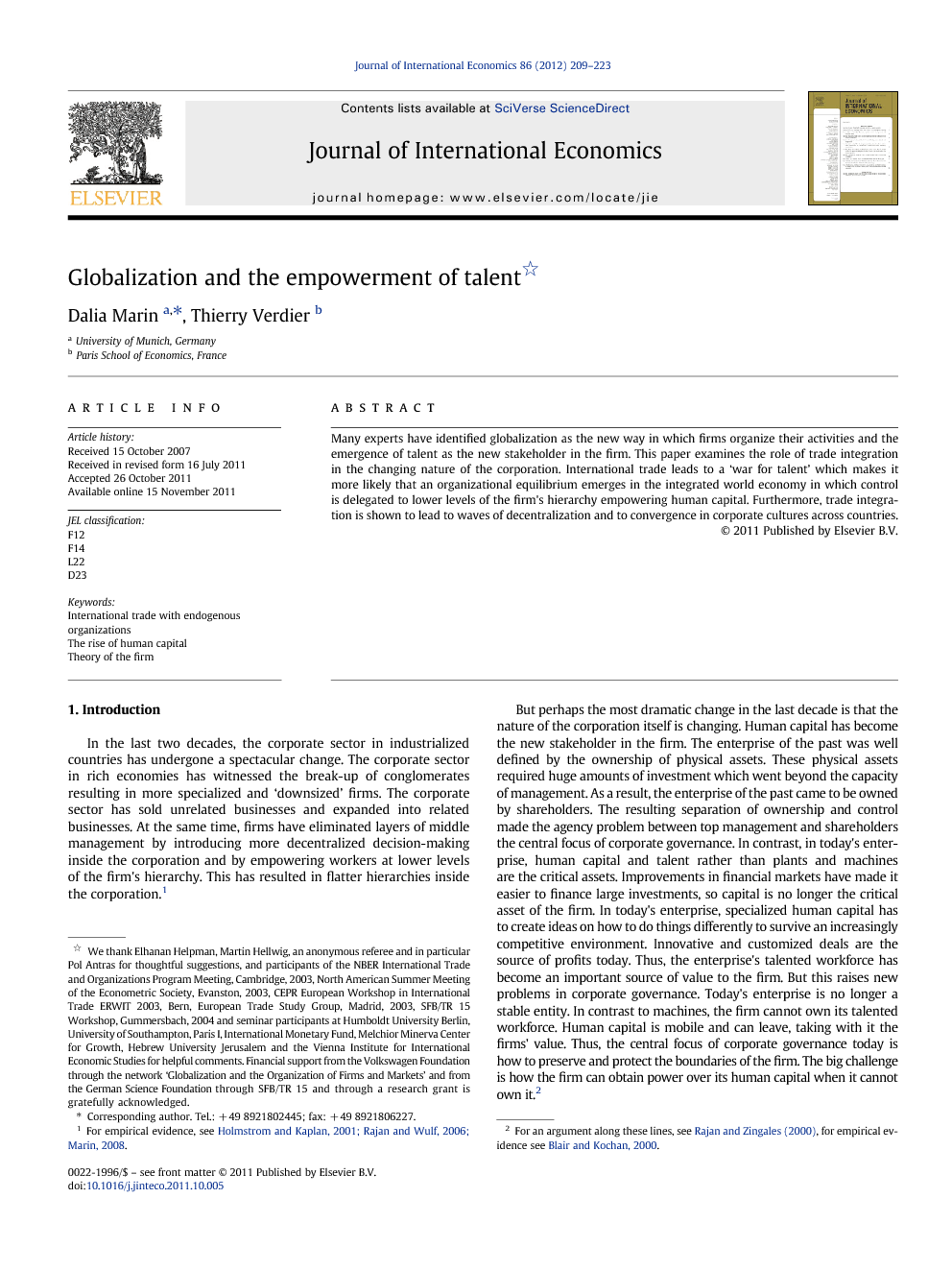 Many experts have identified globalization as the new way in which firms organize their activities and the emergence of talent as the new stakeholder in the firm. This paper examines the role of trade integration in the changing nature of the corporation. International trade leads to a ‘war for talent’ which makes it more likely that an organizational equilibrium emerges in the integrated world economy in which control is delegated to lower levels of the firm's hierarchy empowering human capital. Furthermore, trade integration is shown to lead to waves of decentralization and to convergence in corporate cultures across countries.

In this paper, we have developed a general equilibrium model of trade with differentiated and homogenous goods in which firms endogenously choose the mode of organization. The optimal firm organization is determined by a trade-off between control at the top of the firm and initiative of middle management. Depending on who has power in the firm, we distinguish between three types of organizations: the P-organization in which power is concentrated at the top of the corporate hierarchy, the A-organization in which the talented division manager runs the firm, and the singly managed O-organization without an internal hierarchy in which the firm is run without the talented manager's cooperation. By making entry attractive, trade integration leads to a ‘war for talent’ in which entering firms compete with incumbent firms for scarce manager talent to start a firm. This, in turn, bids up the wage for manager talent and with it the start-up costs of firms. As the stakes rise, there are incentives for stronger control from firms' owners, potentially destroying their manager's initiatives. To prevent this from happening, it becomes optimal to delegate power to the talented manager and the ‘talent firm’ emerges as an equilibrium. Interestingly, we show that trade integration puts pressure on the demand for skills in rich economies for two novel reasons. First, because trade creates the ‘war for talent’. Second, because trade leads to an economy wide shift in corporate organization from a low skill-intensive organization (the P-firm in the North and the O-firm in the South) to a skill-intensive organization (the A-firm). The organizational change towards skill-intensive firms raises the relative demand for human capital. Furthermore, we discussed how trade integration can lead to convergence in corporate cultures across countries. We show how the integrated world economy may move to an organizational equilibrium with flatter corporate hierarchies in which human capital has power in the corporation. As a result, waves of decentralization will be observed as the world economy reorganizes and converges to the organizational equilibrium of the ‘talent firm’. More over, for a given country size, the described organizational convergence across countries will be more likely, the more countries differ in factor endowments and thus the more they trade with one another.