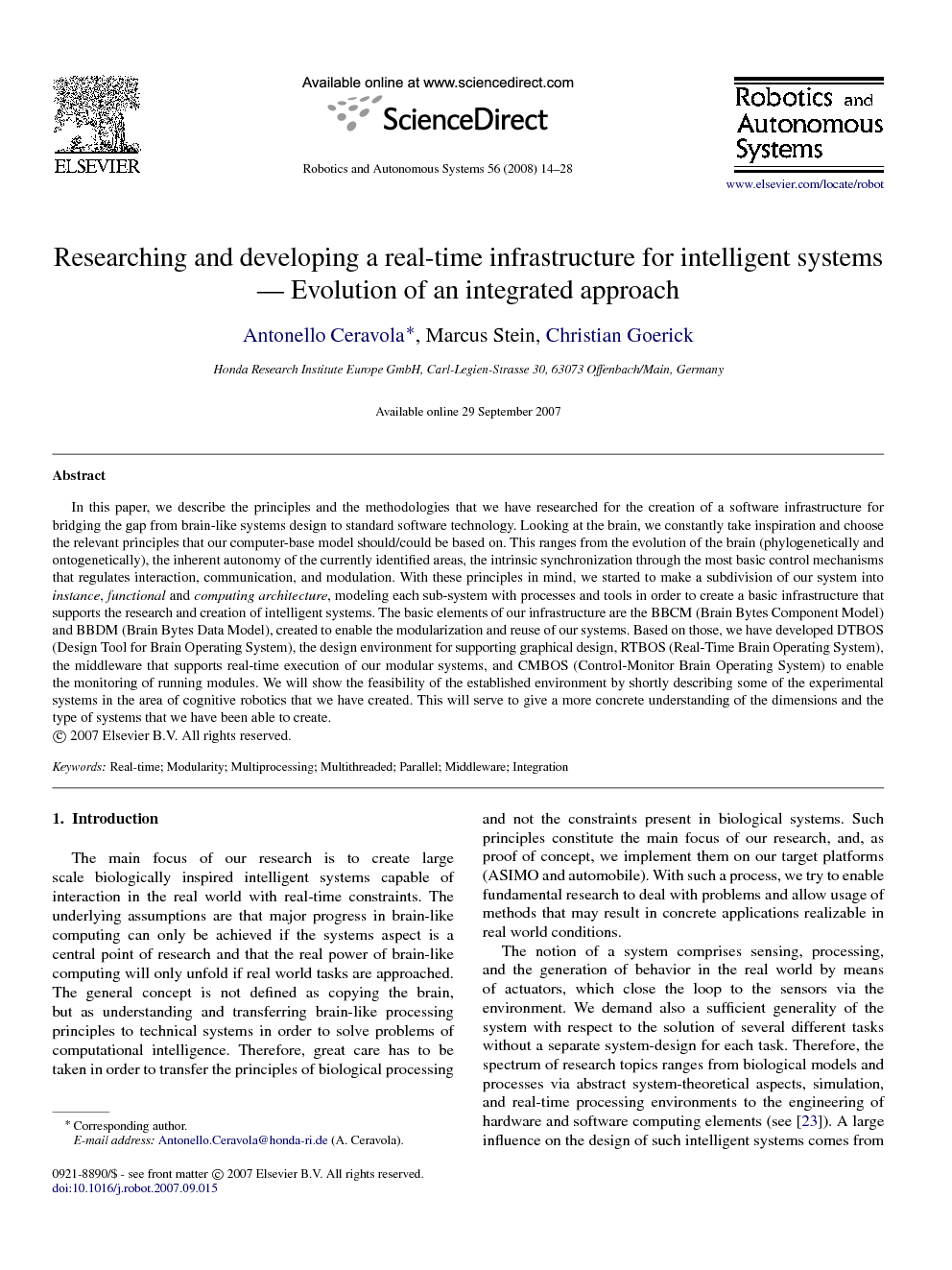 In this paper, we describe the principles and the methodologies that we have researched for the creation of a software infrastructure for bridging the gap from brain-like systems design to standard software technology. Looking at the brain, we constantly take inspiration and choose the relevant principles that our computer-base model should/could be based on. This ranges from the evolution of the brain (phylogenetically and ontogenetically), the inherent autonomy of the currently identified areas, the intrinsic synchronization through the most basic control mechanisms that regulates interaction, communication, and modulation. With these principles in mind, we started to make a subdivision of our system into instance, functional and computing architecture, modeling each sub-system with processes and tools in order to create a basic infrastructure that supports the research and creation of intelligent systems. The basic elements of our infrastructure are the BBCM (Brain Bytes Component Model) and BBDM (Brain Bytes Data Model), created to enable the modularization and reuse of our systems. Based on those, we have developed DTBOS (Design Tool for Brain Operating System), the design environment for supporting graphical design, RTBOS (Real-Time Brain Operating System), the middleware that supports real-time execution of our modular systems, and CMBOS (Control-Monitor Brain Operating System) to enable the monitoring of running modules. We will show the feasibility of the established environment by shortly describing some of the experimental systems in the area of cognitive robotics that we have created. This will serve to give a more concrete understanding of the dimensions and the type of systems that we have been able to create.

In this paper, we described the principles and the methodologies that we have researched for the creation of an integrated research and development environment, the base of our brain-like intelligent systems. We have described the process that governs the life-cycle of our systems research; through this process we have analyzed the main tools we use for integrating our software systems. The component models (BBCM and BBDM), the design tool (DTBOS), the execution engine (RTBOS) and the monitoring tool (CMBOS) constitute the main parts that an integrated software environment should have in order to ensure a certain level of quality and efficiency. In addition to the experience within the three different fields cited in Section 5, there are some general observations we would like to report on. We could experience that the limits of our tools are reached if we are close to the limits of the underlying operating systems and hardware. Those limits are mainly due to general purpose schedulers and limited network bandwidth. For us, this is a mild indicator that the overall overhead introduced by our tools is small. Major parts of our experiments have been contributed by non-systems programmers. With the aid of the offered tools, they were able to create and manage real-time multi-threaded parts of the systems. The overall reuse of components across the different fields depends on the level of granularity of the components. Generally speaking, the reuse is higher for finer-grained components. For example, there is a large overlap of the simple components between the visual components of the first and the third system, but exact numbers have to be determined. The chosen decomposition of the systems as well as the means for working visually and monitoring various systems’ properties allows for real research on the systems level. As pointed out in the paragraph on the auditory systems, different kinds of processing and communication paradigms can be created and managed with the same tools. For example, in the area of the active vision system, we could investigate different synchronization mechanisms without touching any of the processing modules. In the last four years, we have gained experience in using our integrated software environment, and we have clearly demonstrated that we are now able to setup large systems as the result of the work of several researchers in our lab.