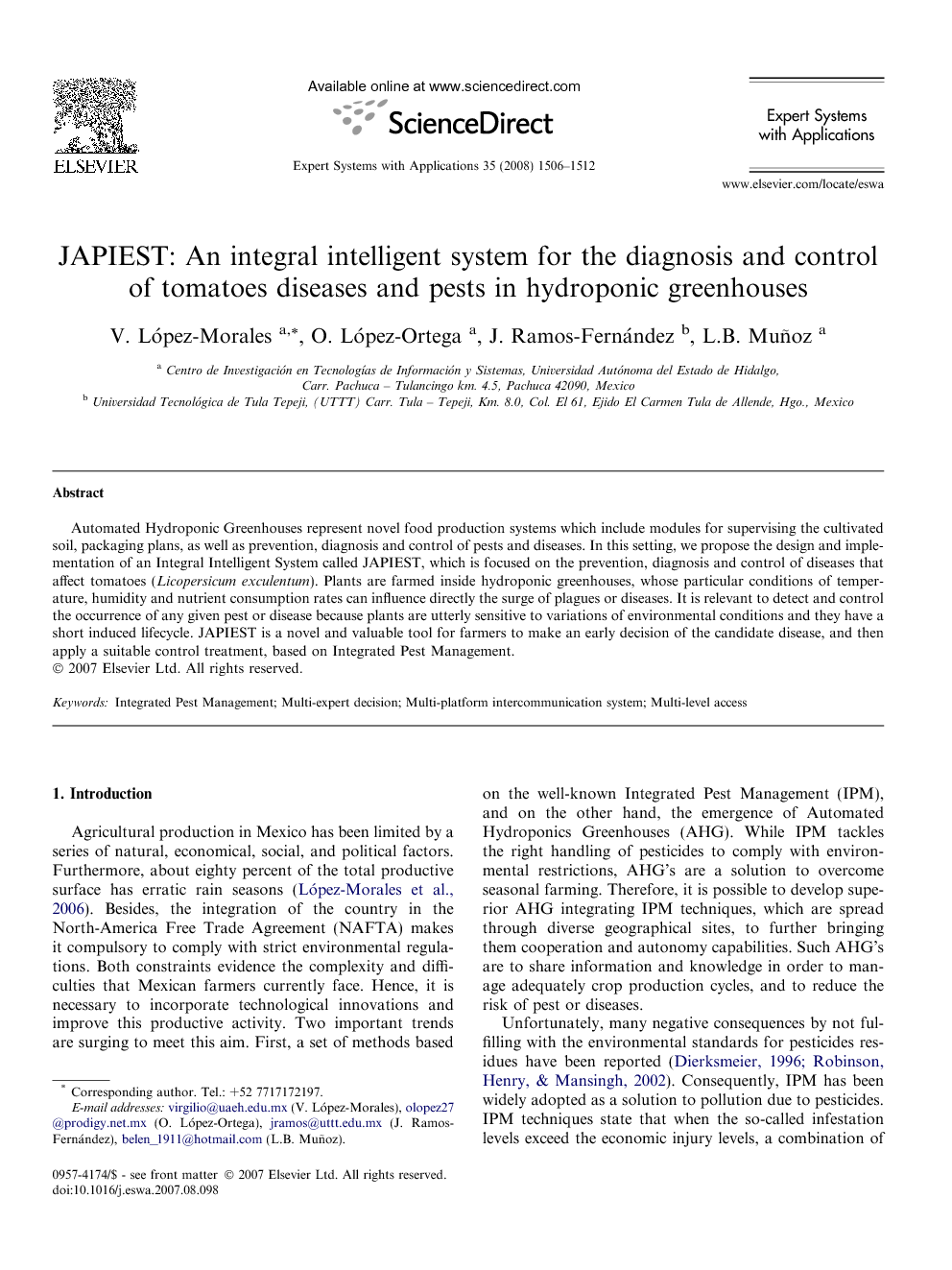 Automated Hydroponic Greenhouses represent novel food production systems which include modules for supervising the cultivated soil, packaging plans, as well as prevention, diagnosis and control of pests and diseases. In this setting, we propose the design and implementation of an Integral Intelligent System called JAPIEST, which is focused on the prevention, diagnosis and control of diseases that affect tomatoes (Licopersicum exculentum). Plants are farmed inside hydroponic greenhouses, whose particular conditions of temperature, humidity and nutrient consumption rates can influence directly the surge of plagues or diseases. It is relevant to detect and control the occurrence of any given pest or disease because plants are utterly sensitive to variations of environmental conditions and they have a short induced lifecycle. JAPIEST is a novel and valuable tool for farmers to make an early decision of the candidate disease, and then apply a suitable control treatment, based on Integrated Pest Management.

Agricultural production in Mexico has been limited by a series of natural, economical, social, and political factors. Furthermore, about eighty percent of the total productive surface has erratic rain seasons (López-Morales et al., 2006). Besides, the integration of the country in the North-America Free Trade Agreement (NAFTA) makes it compulsory to comply with strict environmental regulations. Both constraints evidence the complexity and difficulties that Mexican farmers currently face. Hence, it is necessary to incorporate technological innovations and improve this productive activity. Two important trends are surging to meet this aim. First, a set of methods based on the well-known Integrated Pest Management (IPM), and on the other hand, the emergence of Automated Hydroponics Greenhouses (AHG). While IPM tackles the right handling of pesticides to comply with environmental restrictions, AHG’s are a solution to overcome seasonal farming. Therefore, it is possible to develop superior AHG integrating IPM techniques, which are spread through diverse geographical sites, to further bringing them cooperation and autonomy capabilities. Such AHG’s are to share information and knowledge in order to manage adequately crop production cycles, and to reduce the risk of pest or diseases. Unfortunately, many negative consequences by not fulfilling with the environmental standards for pesticides residues have been reported (Dierksmeier, 1996 and Robinson et al., 2002). Consequently, IPM has been widely adopted as a solution to pollution due to pesticides. IPM techniques state that when the so-called infestation levels exceed the economic injury levels, a combination of biological, cultural, mechanical and chemical control methods are the best approach to reduce infestation levels. Moreover, IPM pays close attention to the foreseen impact of a particular pesticide in the ecosystem under consideration (cf. Institute, 2007 and Greenberg et al., 2004). However, a complete implementation of IPM requires knowledge of the crop itself, the types of pests that affect the crop, and the biological cycles of the plant. Although the environmental and economical benefits of IPM are well acknowledged, it is required a sheer amount of knowledge on the former topics. Unfortunately, the required knowledge resides typically on a number of different experts, and it is not always available to Hydroponic Greenhouses (HG) owners. Hence, we propose to realize this knowledge available by developing an integral kit, for HG (López-Morales et al., 2006), covering a number of technological innovations. In this paper, we state the design and implementation of an intelligent pest management system called JAPIEST. The proposed intelligent system integrates the perspectives of different disciplines, such as plant pathology, entomology, horticulture and agricultural meteorology, into a framework that addresses appropriately the type of decision making needed by plant growers (in our case study tomatoes growers). Hence JAPIEST provides a decision support system integrating important IPM features, which are reflected in both, the rule base and the treatment further suggested. The system is inspired in the work presented by Toth et al., 2001 and Greenberg et al., 2004. Although such systems are valuable, we intend to facilitate and support the construction of crop profiles and the generation of strategic plans to improve the management of diseases and pests. The usefulness of both, profiles and plans resides on being information sources regarding current pest management practices. Some related expert systems in agriculture for different products are already reported (Crowe and Mutch, 1994, Rafea et al., 1995 and Flamm et al., 1991) and some developments on IPM methods (Saunders et al., 1987, Mansigh et al., 2007, El-Sayed et al., 2000 and Prasad et al., 2006). Nevertheless, they did not provide access through the Internet, or they are based on closed platforms which cannot be updated, exploited (data mining), or hierarchically organized in a network platform. These two drawbacks are tackled since the conception of JAPIEST, which provide these kind of capabilities. To describe the conception and construction of JAPIEST, the paper is organized as follows. In Section 2, we state the diseases and pests identification to characterize the main harmful species for tomatoes. Section 3 describes the knowledge acquisition process that was followed to establish the rule base. Section 4 illustrates the design of JAPIEST, and then in Section 5 is exemplified. Finally, in Section 6 we delineate the conclusions and propose future work.

Based on an integrated development environment involving, Java, MySQL, RULE and some interconnecting modules, an expert system is presented to help growers with some helpful advices from experts in different domains. Since the decision to tackle the pest and diseases based exclusively on chemicals has shown a serious drawback, a new agriculture scheme requires to preserve plants production in an artificial regulated environment such as greenhouses, along with an Integrated Pest Management. JAPIEST provides correct answers to the integration of these different domain experts and growers by interfacing different terminologies, skills levels, and different levels of tackling the pest and disease based on the infestation level, taking into account biological and cultural practices, pesticides usage, and the chemical methods, involved in IPM. Based on JAPIEST, it could be possible to provide AHG’s with cooperation and autonomy capabilities in order to share information and knowledge for the maintenance of healthy crop production cycles. Some extensions can be targeted to the on-line supervision and management of: (i) main production, (ii) recollection (iii) packaging, and (iv) delivering. Moreover, the integral project on course also considers to feed nutrients automatically, and to control the environmental variables of the Automated Hydroponic Greenhouses.