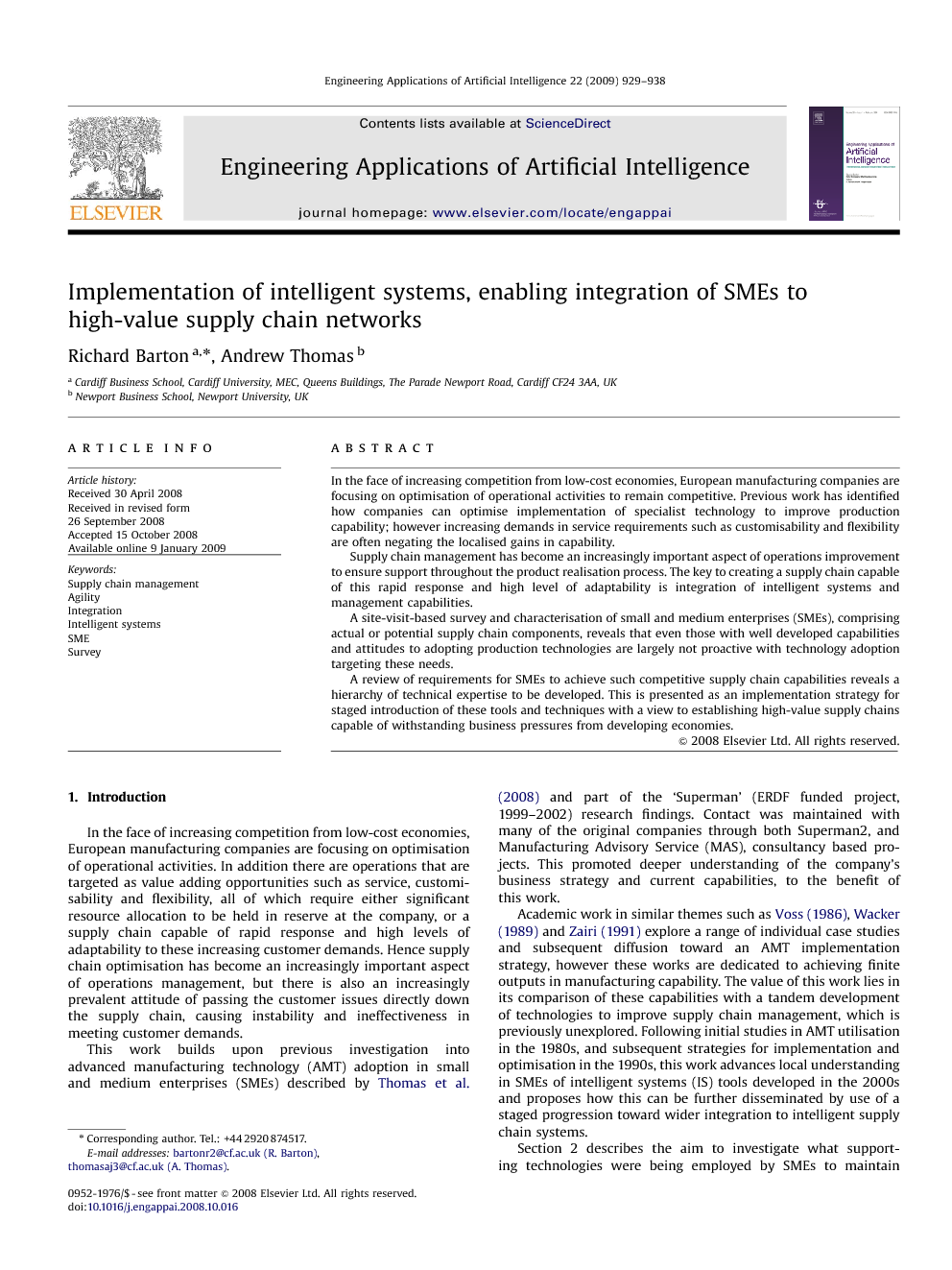 In the face of increasing competition from low-cost economies, European manufacturing companies are focusing on optimisation of operational activities to remain competitive. Previous work has identified how companies can optimise implementation of specialist technology to improve production capability; however increasing demands in service requirements such as customisability and flexibility are often negating the localised gains in capability. Supply chain management has become an increasingly important aspect of operations improvement to ensure support throughout the product realisation process. The key to creating a supply chain capable of this rapid response and high level of adaptability is integration of intelligent systems and management capabilities. A site-visit-based survey and characterisation of small and medium enterprises (SMEs), comprising actual or potential supply chain components, reveals that even those with well developed capabilities and attitudes to adopting production technologies are largely not proactive with technology adoption targeting these needs. A review of requirements for SMEs to achieve such competitive supply chain capabilities reveals a hierarchy of technical expertise to be developed. This is presented as an implementation strategy for staged introduction of these tools and techniques with a view to establishing high-value supply chains capable of withstanding business pressures from developing economies.

From this work, it is evident that SMEs do not currently utilise intelligent systems to manage supply chain relationships, and that more importantly it can also be said that the majority of SMEs do not have sufficient capability, or experience, to embark on an AIS implementation with any confidence in success. There are examples of proactive management using intelligent tools, but integration to a higher, complete, level eludes even many knowledgeable companies. Academic interest in furthering practical implementation lies predominantly in this area of systematic implementation. The majority of SMEs surveyed have only a basic comprehension of what is possible, and require partnership with a knowledge partner to start the process. Hence there is an immediate gap apparent in academic concentration and industrial requirement. This paper aims to describe what activities can be undertaken prior to engagement with a knowledge-base partner, that will put an SME in a position of understanding of what can be achieved provide a suitable basis for implementation. Finally, a number of academic works are referenced, not as a literature review as such but as an idea of the scope of application of intelligent tools available today. Such is the bewildering array of studies, models, suppositions and proposals that it is hardly surprising that an SME with little knowledge of AIS tools and techniques does not know where to start or what could be achieved. It is hoped that this paper serves to simplify the process at least at the ‘front end’ by proposing where an SME can categorise itself, what subsequent levels of technology lie ahead on the road to system implementation and finally what constituent activities can be undertaken to anticipate any difficulties. Future work can potentially expand on the implementation model proposed, which requires rigorous validation in context of SME improvements. Such a study could be based on a number of test bed companies that are typical of the existing category-one family of companies, hence aim to undertake the journey toward supply chain integration using the model as a strategic guideline. Subsequently, additional detail can be developed for each stage of development highlighting specific tools, techniques and implementation practices which have ensured success. Further to this, the categorisation of companies and intelligent systems can be refined to identify particular stagepoints in the process beyond the basic 1–2–3. This will allow companies to audit themselves against required capabilities and identify a suitable starting point to achieve improvement as quickly and efficiently as possible. Success is the key, and as this area of research continues to grow rapidly, association of companies to knowledge, research or academic expertise is essential until the depth of understanding in the wider business community increases to a level of self-perpetuation which the likes of lean manufacturing is enjoying today. To this end it is also important that collaborations such as this special edition are emulated in order to continue to integrate research centres operating in a variety of environments.