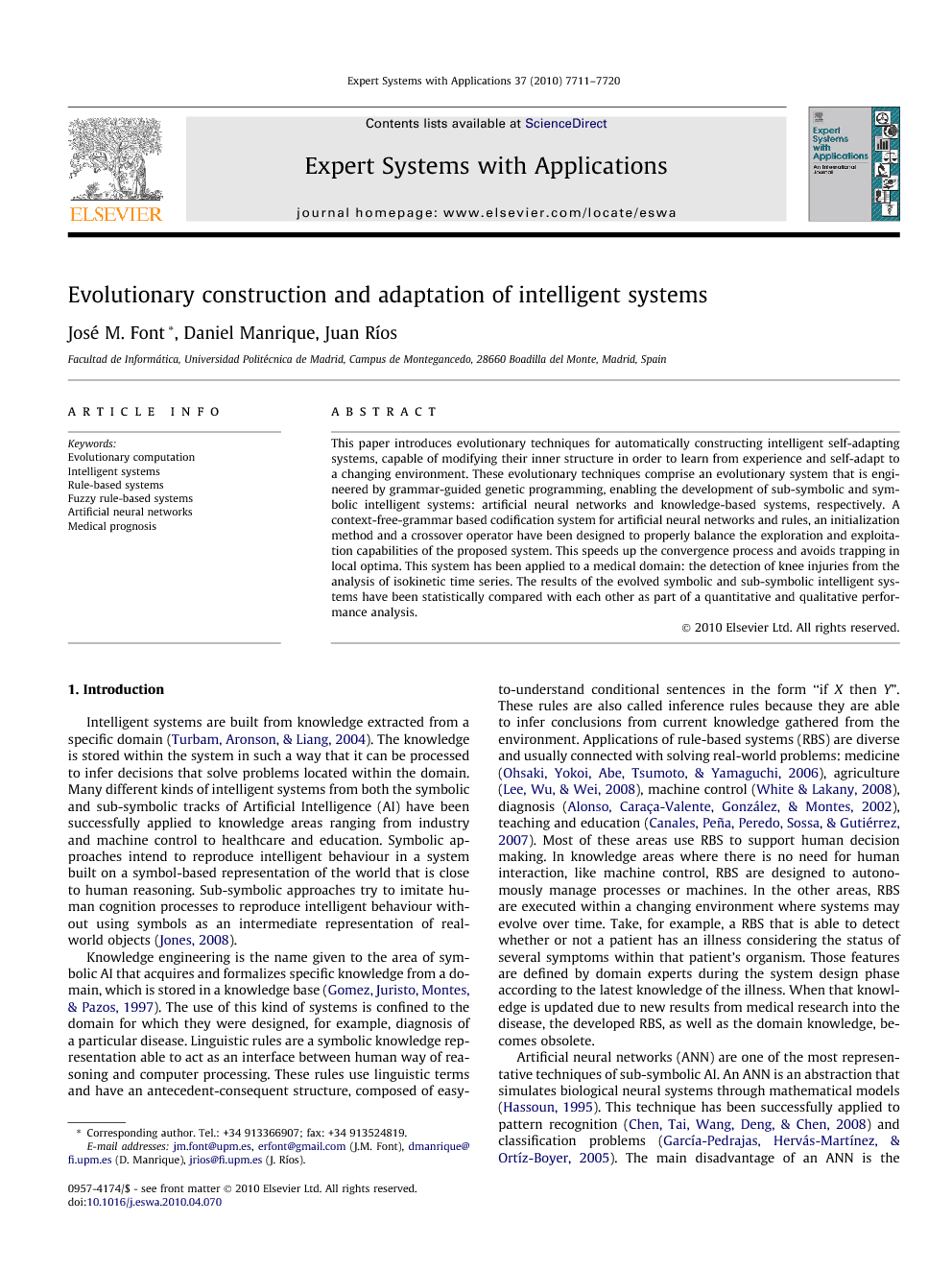 This paper introduces evolutionary techniques for automatically constructing intelligent self-adapting systems, capable of modifying their inner structure in order to learn from experience and self-adapt to a changing environment. These evolutionary techniques comprise an evolutionary system that is engineered by grammar-guided genetic programming, enabling the development of sub-symbolic and symbolic intelligent systems: artificial neural networks and knowledge-based systems, respectively. A context-free-grammar based codification system for artificial neural networks and rules, an initialization method and a crossover operator have been designed to properly balance the exploration and exploitation capabilities of the proposed system. This speeds up the convergence process and avoids trapping in local optima. This system has been applied to a medical domain: the detection of knee injuries from the analysis of isokinetic time series. The results of the evolved symbolic and sub-symbolic intelligent systems have been statistically compared with each other as part of a quantitative and qualitative performance analysis.

This paper proposed an evolutionary system for generating self-adapting intelligent machines. This system uses GGGP searching capabilities to automatically extract knowledge from a data source and generate trained symbolic and sub-symbolic intelligent systems with rule and fuzzy rule knowledge bases and artificial neural networks, respectively. The proposed evolutionary system has two main advantages. First it operates in a fully expert-independent manner. Second the generated intelligent machines are able to evolve and self-adapt to changes in their environment: they are robust intelligent systems. The two main contributions proposed for the evolutionary system are: the initialization method for evolving intelligent systems (IMEIS) and the crossover operator X. These algorithms have been specially designed to allow the evolutionary system to take advantage of ambiguous CFGs, and their combined execution enhances the system’s search space exploration and exploitation capabilities. Three codification methods have been presented enabling the evolutionary system to generate rule-based systems (RBS), fuzzy neural networks (FNN) and artificial neural networks (ANN). Following these methods, the presented evolutionary system has been successfully used to generate three different kinds of knowledge bases (RBS, FNN and ANN) for intelligent machines capable of solving a real-world problem in a medical domain: the detection of knee injuries through the analysis of isokinetic time series. The results show that both RBS and FNN approaches accurately detect knee injuries, whereas ANNs have lower accuracy rates. A post-hoc statistical analysis has empirically demonstrated that there are no significant differences between the performance of RBSs and FNNs, but a later efficiency test showed that it is less time consuming to evolve FNNs than RBSs to reach a satisfactory solution. Additionally, we studied the learning capabilities of the three evolved intelligent systems, revealing that FNNs are the most flexible knowledge bases in the training phase, making them the most robust approach. These successful results show the proposed evolutionary system to be a very useful tool for automatically generating intelligent machines. From this starting point, several different research lines are currently under study, like the development of new codifying methods enabling the evolutionary system to generate Bayesian networks and tree-based classifiers.