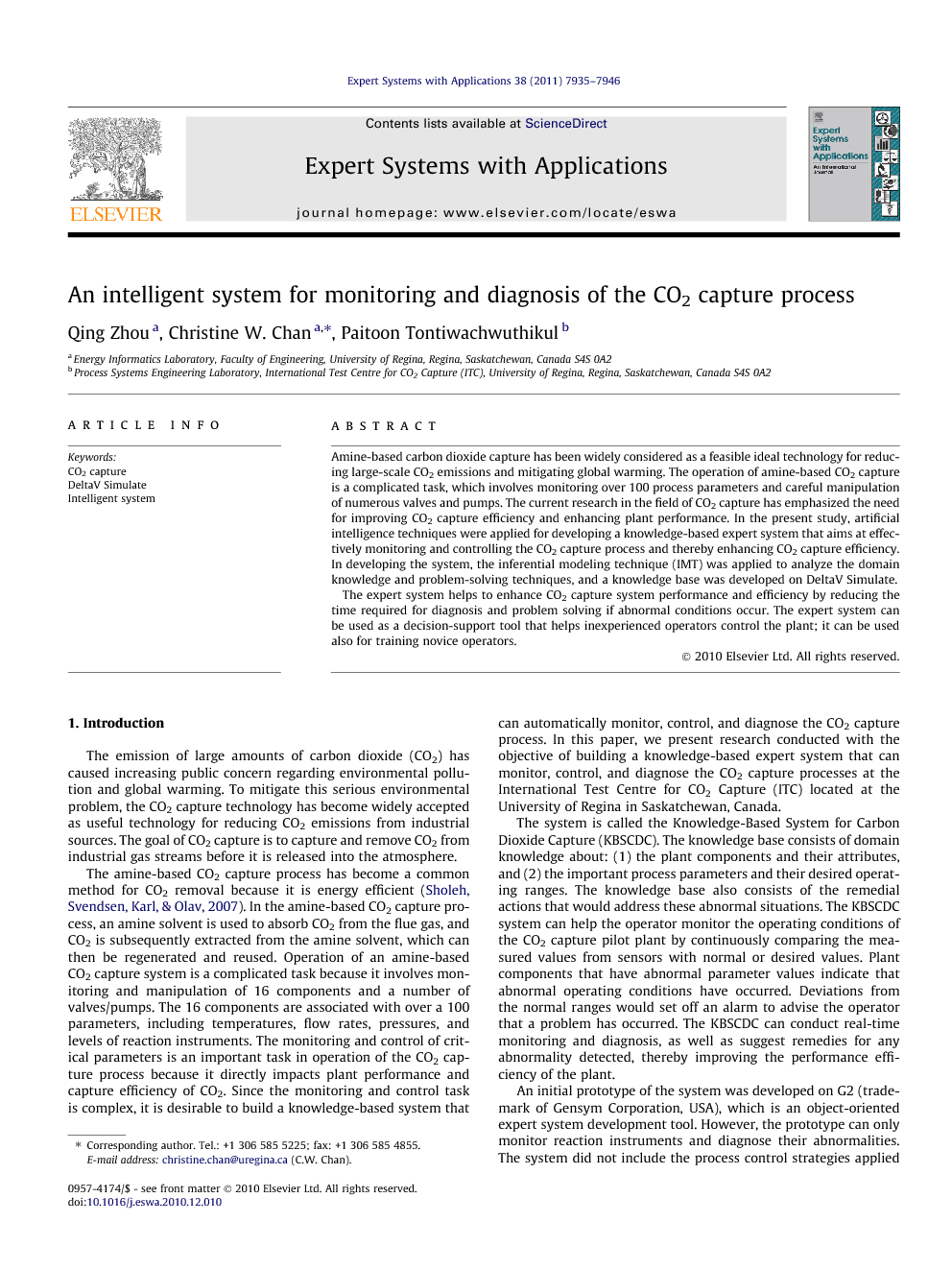 Amine-based carbon dioxide capture has been widely considered as a feasible ideal technology for reducing large-scale CO2 emissions and mitigating global warming. The operation of amine-based CO2 capture is a complicated task, which involves monitoring over 100 process parameters and careful manipulation of numerous valves and pumps. The current research in the field of CO2 capture has emphasized the need for improving CO2 capture efficiency and enhancing plant performance. In the present study, artificial intelligence techniques were applied for developing a knowledge-based expert system that aims at effectively monitoring and controlling the CO2 capture process and thereby enhancing CO2 capture efficiency. In developing the system, the inferential modeling technique (IMT) was applied to analyze the domain knowledge and problem-solving techniques, and a knowledge base was developed on DeltaV Simulate. The expert system helps to enhance CO2 capture system performance and efficiency by reducing the time required for diagnosis and problem solving if abnormal conditions occur. The expert system can be used as a decision-support tool that helps inexperienced operators control the plant; it can be used also for training novice operators.

The emission of large amounts of carbon dioxide (CO2) has caused increasing public concern regarding environmental pollution and global warming. To mitigate this serious environmental problem, the CO2 capture technology has become widely accepted as useful technology for reducing CO2 emissions from industrial sources. The goal of CO2 capture is to capture and remove CO2 from industrial gas streams before it is released into the atmosphere. The amine-based CO2 capture process has become a common method for CO2 removal because it is energy efficient (Sholeh, Svendsen, Karl, & Olav, 2007). In the amine-based CO2 capture process, an amine solvent is used to absorb CO2 from the flue gas, and CO2 is subsequently extracted from the amine solvent, which can then be regenerated and reused. Operation of an amine-based CO2 capture system is a complicated task because it involves monitoring and manipulation of 16 components and a number of valves/pumps. The 16 components are associated with over a 100 parameters, including temperatures, flow rates, pressures, and levels of reaction instruments. The monitoring and control of critical parameters is an important task in operation of the CO2 capture process because it directly impacts plant performance and capture efficiency of CO2. Since the monitoring and control task is complex, it is desirable to build a knowledge-based system that can automatically monitor, control, and diagnose the CO2 capture process. In this paper, we present research conducted with the objective of building a knowledge-based expert system that can monitor, control, and diagnose the CO2 capture processes at the International Test Centre for CO2 Capture (ITC) located at the University of Regina in Saskatchewan, Canada. The system is called the Knowledge-Based System for Carbon Dioxide Capture (KBSCDC). The knowledge base consists of domain knowledge about: (1) the plant components and their attributes, and (2) the important process parameters and their desired operating ranges. The knowledge base also consists of the remedial actions that would address these abnormal situations. The KBSCDC system can help the operator monitor the operating conditions of the CO2 capture pilot plant by continuously comparing the measured values from sensors with normal or desired values. Plant components that have abnormal parameter values indicate that abnormal operating conditions have occurred. Deviations from the normal ranges would set off an alarm to advise the operator that a problem has occurred. The KBSCDC can conduct real-time monitoring and diagnosis, as well as suggest remedies for any abnormality detected, thereby improving the performance efficiency of the plant. An initial prototype of the system was developed on G2 (trademark of Gensym Corporation, USA), which is an object-oriented expert system development tool. However, the prototype can only monitor reaction instruments and diagnose their abnormalities. The system did not include the process control strategies applied to the control devices. Details of the prototype system have been presented in Zhou, Chan, and Tontiwachiwuthikul (2009). This paper presents an improved version of the knowledge-based expert system that was implemented with DeltaV Simulate (trademark of Emerson Corp., USA). DeltaV Simulate provides control utilities which enables the configuration of control strategies in small modular components. These modules link algorithm, conditions, and provide control over the field devices such as pumps and valves. Modules can communicate directly with each other, and can be coordinated by other modules to perform higher-level control strategies. The modules deploy different algorithms such as sequential function chart (SFC) and function block diagram (FBD). SFC is made up of a series of steps, transitions, and actions and it is used for representing the sequence of controlling strategies which contain multiple states. FBD is made up of interconnected function blocks, which process the incoming signals and send the signal to the control devices. Each function block contains standard process control algorithm and parameters that customize the algorithm to perform a particular function in the process control. Therefore, the new version of KBSCDC has the following additional functions compared to the earlier G2 version: (1) modules for different control devices are configured based on their characteristics, and (2) the control strategies applied to the control devices are simulated. The paper discusses design and development of the improved version of the knowledge-based system, and demonstrates use of the system by using problems scenarios that occur due to abnormal conditions. The paper is organized as follows: Section 2 presents the background literature relevant to the area of CO2 capture and the knowledge acquisition approach of the inferential modeling technique adopted in this research. Section 3 describes the process of development of the knowledge base. Section 4 presents design and implementation of the system on DeltaV Simulate based on the developed knowledge base. Application of the system is demonstrated using a case study in Section 5. Section 6 gives a conclusion and includes some discussion about future work.

In the present study, a knowledge-based expert system for monitoring and control of the CO2 capture process was developed. To develop the system, the IMT was applied to analyze the domain knowledge and problem-solving techniques and a knowledge base was established. The KBSCDC system was implemented on DeltaV Simulate, which provides features useful for development, such as graphic displays, alarms, and pop-up menus. Compared to G2, DeltaV Simulate provides function blocks, which supported the configuration of control mechanisms and definition of the specific parameters for different valves and pumps, such as set-point value of a PID control valve and status of a two-state pump. Therefore, the tool of DeltaV Simulate enabled us to simulate the control strategies applied to the vales and pumps and the influence of the abnormal conditions caused by these control actions. The KBSCDC system helps to enhance performance and efficiency of the CO2 capture system by dramatically reducing the time for problem diagnosis and resolution when abnormal operating conditions occur. The system also can be used as a decision-support tool for inexperienced operators and aids them in controlling the plant; it can be used for training novice operators. The knowledge base can be extended or refined with future additions of knowledge. The current version of the KBSCDC system has two disadvantages. Since there are altogether 16 components involved in the process, an abnormal condition can be caused by incorrect performance of more than one component or parameter. However, the system can only deal with abnormal operation of one component at a time. Moreover, the knowledge captured for system diagnosis and control represents the problem-solving expertise of only one expert operator. It is likely that other senior operators would conduct problem solving in a different manner. To address these weaknesses, future development of the system will focus on enabling monitoring, control, and diagnosis of multiple malfunctioning components or parameters and integrating expertise from additional operators to improve the capability and reliability of the system.