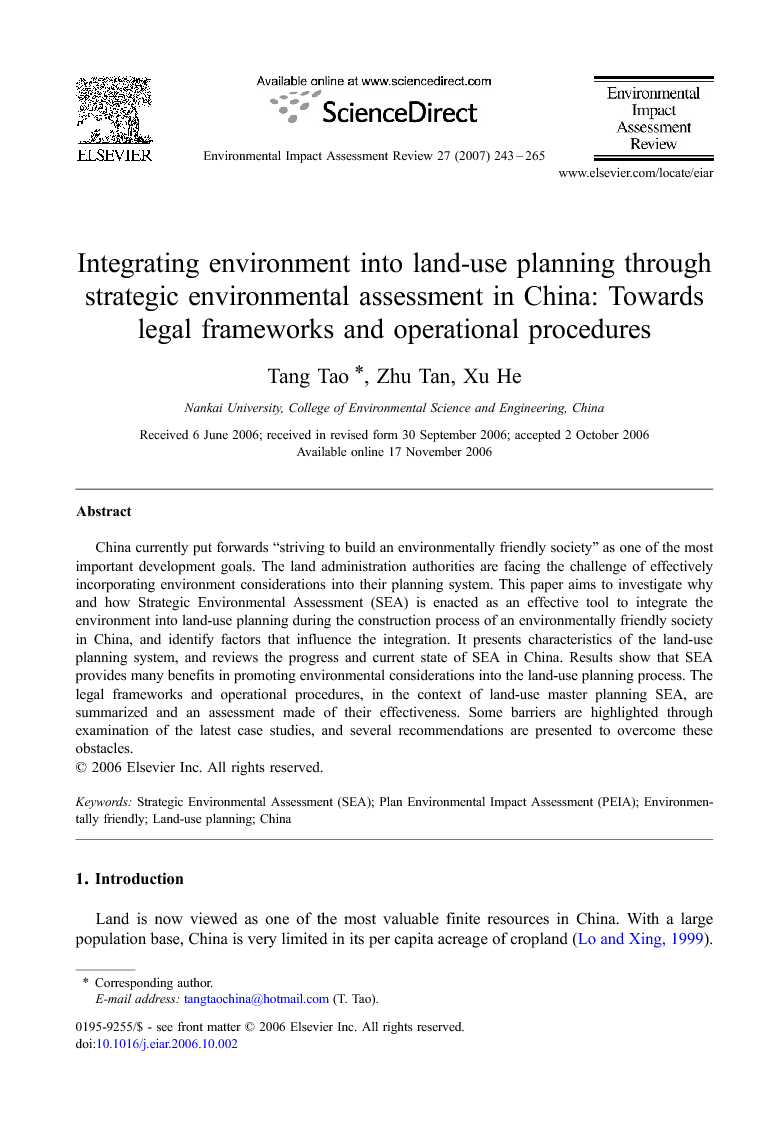 China currently put forwards “striving to build an environmentally friendly society” as one of the most important development goals. The land administration authorities are facing the challenge of effectively incorporating environment considerations into their planning system. This paper aims to investigate why and how Strategic Environmental Assessment (SEA) is enacted as an effective tool to integrate the environment into land-use planning during the construction process of an environmentally friendly society in China, and identify factors that influence the integration. It presents characteristics of the land-use planning system, and reviews the progress and current state of SEA in China. Results show that SEA provides many benefits in promoting environmental considerations into the land-use planning process. The legal frameworks and operational procedures, in the context of land-use master planning SEA, are summarized and an assessment made of their effectiveness. Some barriers are highlighted through examination of the latest case studies, and several recommendations are presented to overcome these obstacles.

Land is now viewed as one of the most valuable finite resources in China. With a large population base, China is very limited in its per capita acreage of cropland (Lo and Xing, 1999). Latest figures of the Ministry of Land and Resources showed that China's per capita arable land dropped from 1.41 mu (0.094 ha) in 2004 to 1.4 mu (0.093 ha) in 2005, which was only 40% of the world average (Xinhuanet.com, 2006a). Relative shortage of land is becoming a critical issue hindering China's development, particularly in those coastal regions experiencing rapid urbanization, industrial development and population growth. Some problems depleting land include: grasslands degeneration, increasing desertification, drought, alkalization and soil erosion. In order to promote and achieve coordinated development of the economy, society and environment, a vital role has been presented to making economic growth more environmentally friendly in the 11th Five-Year Plan in China (Xinhuanet.com, 2006b). The objective of “striving to build an environmentally friendly society” has become one of the most important developmental goals. If this goal is to be achieved, the integration of the environment into land-use decision-making process is very essential. Strategic Environmental Assessment (SEA) can be seen as a breakthrough point of constructing an environmentally friendly society in China (Chen, 2005). SEA may be defined as a systematic and comprehensive process for evaluating the environmental consequences of proposed policy, plan or programme (PPP) and its alternatives in order to ensure they are fully considered and appropriately addressed at the earliest suitable stage of the decision-making process (Therivel et al., 1992, Wood and Djeddour, 1992 and Sadler and Verheem, 1996). Many countries, e.g., Canada, the Netherlands, New Zealand, and the United States (Wood, 1995) have established some form of SEA system. The application of SEA to plans and programmes is more prevalent, especially the energy, transport, waste and water sectors and on spatial or land-use plans (Dalal-Clayton and Sadler, 2005). However, it could be said that every SEA and land-use planning system is unique because of their respective legal, administrative and political circumstances (Jones et al., 2005). In autumn 2002, China promulgated legal requirements for SEA with the adoption of the Environmental Impact Assessment Law of the People's Republic of China (“EIA Law”). EIA Law has been implemented in China since 1 September 2003 and requires those plans that have potential significant environmental effects to undergo environmental impact assessment. Although the formal legal arrangement has been in place on paper for more than three years, SEA's actual application in plan-making has remained premature in its development. In the land-use planning sector, a key issue is the incorporation of the EIA Law's requirements into an SEA process EIA Law is largely “procedural” in nature and sets out a number of well-defined steps that must be undertaken by a Plan-level SEA. The methodology for undertaking each procedural step is left to the SEA practitioners to determine. In order to apply SEA effectively, the system within which it functions needs to be analyzed first. This paper is intended to examine the characteristic of Chinese land-use planning and suggest how SEA can be more readily applied to the land-use master plan-making process, the foundation of the land-use planning system in China.

Population growth, rapid urbanization and industrialization, insufficient public knowledge and participation, and extensive economic growth have all been factors that have, directly or indirectly, contributed to the over-exploitation of natural resources and associated deterioration of the environment in China. Today, China finds itself a unique role to achieve and maintain sustainable development, with taking “developing an environmentally friendly society” as one of its most important developmental goals. The enactment and implementation of the EIA Law is actually a key and active measure to integrate the environmental considerations as well as environmentally friendly principles into governmental decision-making process. China has a hierarchical land-use planning system that requires the preparation of land-use plans at different administrative levels. SEA can enact as an effective tool for integrating the environmental considerations into the land-use master planning process. Formal requirements for the SEA of land-use master plans were introduced with the EIA Law of 2003, yet they remain in an undeveloped state. The major barriers to the implementation of land-use master planning SEA are similar to those issues hindering broad in the Chinese SEA system (see Table 3; Li et al., 2006). Full application of SEA on land-use master planning should require wide support, which involves agreeing that SEA does, in fact, positively contribute to a more environmentally friendly decision-making process. In conclusion, we recommend the following activities to enhance the effectiveness of SEA on land-use master planning: (1) Establish a strongly and standardized institutional system for SEA implementation. Regarding the existing latitude of the EIA Law, a strongly and standardized institutional system for SEA should be promulgated as a supplement to the EIA Law, including standards and ordinances for SEA quality assurance developed by SEPA. Regulations for the application and implementation of SEA need to be established by national and local governments and related departments of land administration. The guidance for city-level land-use master planning SEA, as well as the sharing database for PEIA should be developed and established jointly by SEPA and departments of land administration. (2) Design and organize SEA training programs for different types of audiences. To date, the concept of SEA is limited among Chinese SEA professionals and related governmental departments. It is necessary to organize training programs to educate and familiarize land administration authorities, SEA practitioners, and the general public about the SEA process and its benefits. The content of training courses is based on the EIA Law and related regulations, operational procedures and essential methods and technologies, case studies, and optimal approaches to integrate SEA into planning process. The contents also have to be designed and developed according to the characteristic and requirements of various audiences. (3) Select experimental units for SEA. It is an essential principle that academic study on SEAs must mesh with their existing practices. So a considerable amount of case studies need to be developed and analyzed, and the related practical experience should be summarized in good time. (4) Promote better study on the SEA methodologies and technologies. Since crucial obstacles exist in SEA's technical application, it is essential to learn from the other countries' experience about SEA, such as the prediction techniques used (e.g., scenario analysis), methods of economic evaluation of environmental impacts (e.g., inputs/outputs analysis), new assessment indicators (e.g. green GDP or ecological footprint), and workable approaches for public participation. SEA researchers and practitioners should introduce those elements which prove amenable to the Chinese SEA system.