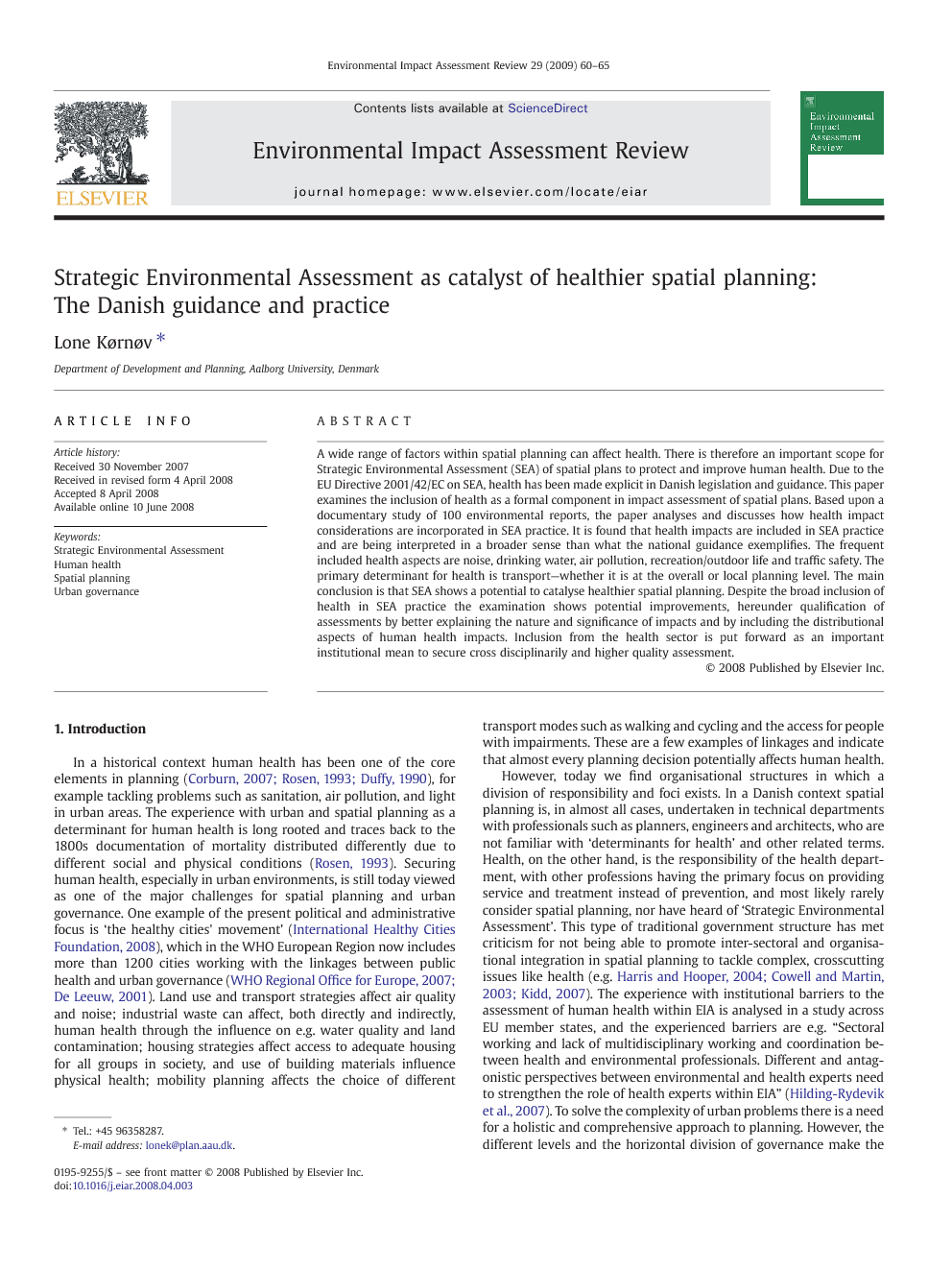 A wide range of factors within spatial planning can affect health. There is therefore an important scope for Strategic Environmental Assessment (SEA) of spatial plans to protect and improve human health. Due to the EU Directive 2001/42/EC on SEA, health has been made explicit in Danish legislation and guidance. This paper examines the inclusion of health as a formal component in impact assessment of spatial plans. Based upon a documentary study of 100 environmental reports, the paper analyses and discusses how health impact considerations are incorporated in SEA practice. It is found that health impacts are included in SEA practice and are being interpreted in a broader sense than what the national guidance exemplifies. The frequent included health aspects are noise, drinking water, air pollution, recreation/outdoor life and traffic safety. The primary determinant for health is transport—whether it is at the overall or local planning level. The main conclusion is that SEA shows a potential to catalyse healthier spatial planning. Despite the broad inclusion of health in SEA practice the examination shows potential improvements, hereunder qualification of assessments by better explaining the nature and significance of impacts and by including the distributional aspects of human health impacts. Inclusion from the health sector is put forward as an important institutional mean to secure cross disciplinarily and higher quality assessment.

The systematic and documented integration of human health aspects into European spatial planning has been a legal requirement since the introduction of EU Directive 2001/42/EC on SEA. The analysis of the Danish SEA guidance and the municipal SEA practice also shows that health is receiving more of a focus—both in guidance and in practice. The guidance, regarding assessment of impacts on human health: – underlines the importance of the broad concept of the environment, hereunder human health, – defines human health—though narrow compared to WHO definition, while it focuses on environmental variables only, – provides examples of objectives related to human health, and – recommends that the organisation of the SEA work must be cross disciplinarily to secure assessment of parameters within the broad environmental concept. The municipal practice, based upon the analysis of 100 environmental reports on the municipal plan and local plan level, shows e.g.: – Health as a parameter is included in planning and assessment practice (reports include in average 3.6 health aspects for municipal plans and 2.7 for local plans), and only 7 reports do not consider any health aspects at all. – Health is interpreted in a broader sense than the examples of health objectives provided in the guidance. 23 health aspects are found in total. – Aspects often included are: Noise, drinking water, air pollution, recreation/outdoor life and traffic safety. That counts for both municipal plans and local plans. For the less often and rarely/never included aspects, the same coherence between the two levels of assessments does not exist. – A comparison of length of reports and the number of health aspects shows a link: The longer the reports, the more aspects included. Another link that was found was that the involvement of consultants (either fully or partly preparing the report) results in longer reports. – Both negative and positive impacts on human health are assessed as required in legislation. Besides for golf courses, the environmental reports for all other planning themes show a dominance of negative impacts due to planning. – In more than 80% of the cases the assessment of human health is qualitative. – There is a lack of an assessment of the distribution of health impact; neither groups nor geographical areas are addressed. – The primary determinant for health at both planning levels is transport. – The presentation of human health impacts is lacking in the environmental reports, and it is very difficult to find the assessment of human health in the reports (only 7% of the reports treat human health under an independent heading). The above listed findings from SEA practice in spatial planning show that the authorities assess the impact on human health. The analysis, however, also points to methodological and institutional elements that can and should be improved in future practice. Regarding the assessments done, this needs to be qualified by explaining the nature and significance of the assessed health impacts and by including the distributional aspects of human health impacts. Furthermore the authorities need to treat human health as a separate element in the SEA and therefore present the assessment of impacts on health under its own heading in the environmental report. This will also ease the access for politicians and the public interested in health issues. The national guidance suggests a cross-disciplinary organisation of the SEA work. However, only one authority explicitly refers to the health department in the report. A conscious organisation of the SEA work, including representation from the health sector, is needed. Similar experience was found in a very recent study from England. Burns and Bond (2007) found in their communication with those involved in land use planning that SEA does provide a promising framework but lack of dialogue with health practitioners hinder the integration of health. Comparing the health determinants in the health map model by Barton and Grant (2006), the Danish SEA Guidance and the SEA practice, it is found that authorities take on board more determinants than only the physical ones indicated in the guidance—though significantly fewer than the health map model. The broadness of determinants assessed in SEA of spatial planning can be discussed. Knowing the discipline divided urban governance system, it seems unrealistic to include both physical and social determinants. In the re-integrating of spatial planning and human health, the negotiable way might be to first start with the physical determinants and secondly, when decided appropriately, consider social health determinants.