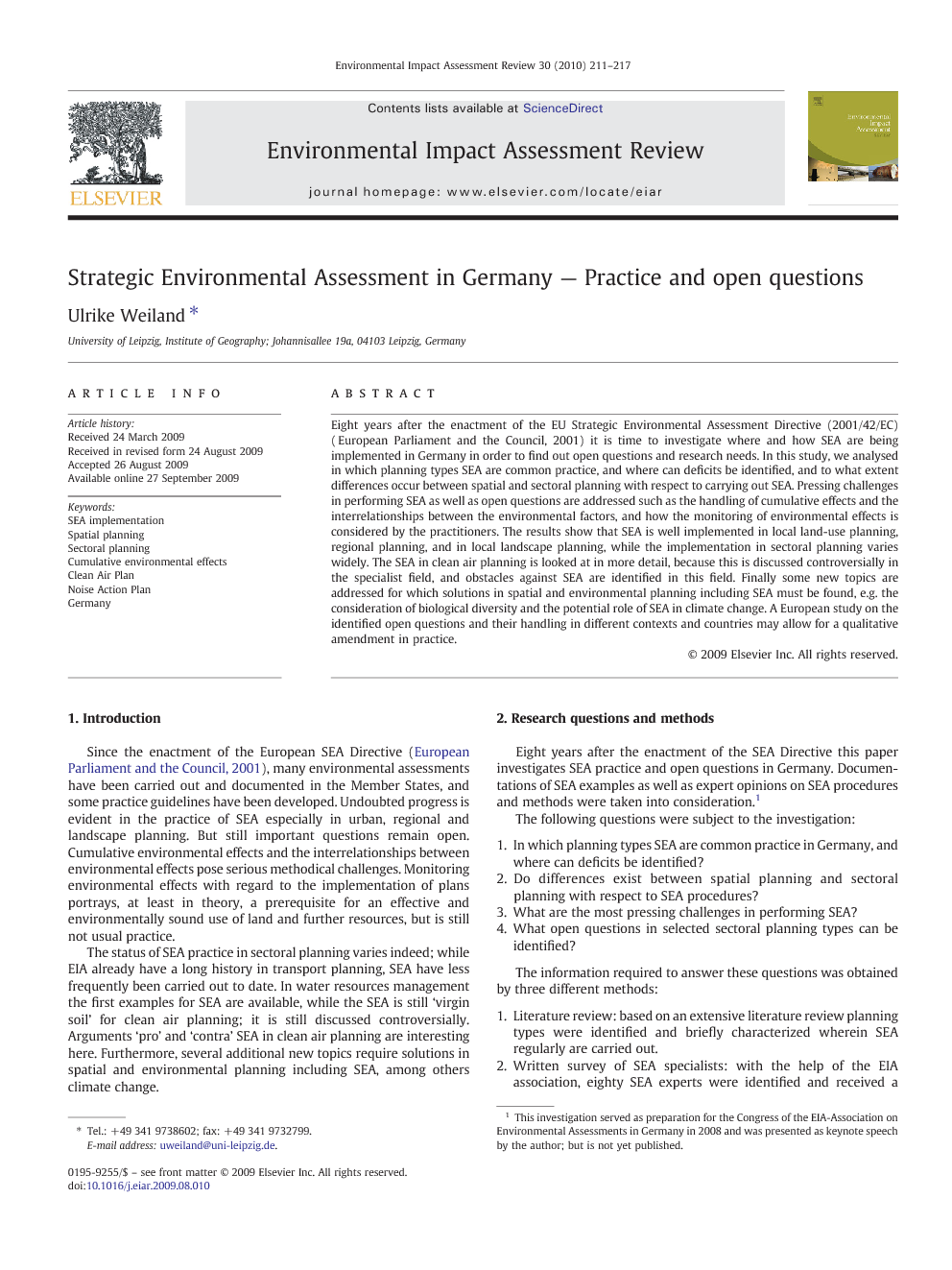 Eight years after the enactment of the EU Strategic Environmental Assessment Directive (2001/42/EC) (European Parliament and the Council, 2001) it is time to investigate where and how SEA are being implemented in Germany in order to find out open questions and research needs. In this study, we analysed in which planning types SEA are common practice, and where can deficits be identified, and to what extent differences occur between spatial and sectoral planning with respect to carrying out SEA. Pressing challenges in performing SEA as well as open questions are addressed such as the handling of cumulative effects and the interrelationships between the environmental factors, and how the monitoring of environmental effects is considered by the practitioners. The results show that SEA is well implemented in local land-use planning, regional planning, and in local landscape planning, while the implementation in sectoral planning varies widely. The SEA in clean air planning is looked at in more detail, because this is discussed controversially in the specialist field, and obstacles against SEA are identified in this field. Finally some new topics are addressed for which solutions in spatial and environmental planning including SEA must be found, e.g. the consideration of biological diversity and the potential role of SEA in climate change. A European study on the identified open questions and their handling in different contexts and countries may allow for a qualitative amendment in practice.

Since the enactment of the European SEA Directive (European Parliament and the Council, 2001), many environmental assessments have been carried out and documented in the Member States, and some practice guidelines have been developed. Undoubted progress is evident in the practice of SEA especially in urban, regional and landscape planning. But still important questions remain open. Cumulative environmental effects and the interrelationships between environmental effects pose serious methodical challenges. Monitoring environmental effects with regard to the implementation of plans portrays, at least in theory, a prerequisite for an effective and environmentally sound use of land and further resources, but is still not usual practice. The status of SEA practice in sectoral planning varies indeed; while EIA already have a long history in transport planning, SEA have less frequently been carried out to date. In water resources management the first examples for SEA are available, while the SEA is still ‘virgin soil’ for clean air planning; it is still discussed controversially. Arguments ‘pro’ and ‘contra’ SEA in clean air planning are interesting here. Furthermore, several additional new topics require solutions in spatial and environmental planning including SEA, among others climate change.

To sum up, the state of the implementation of SEA in Germany is judged as ambivalent. The legal implementation is quite far advanced, but remains in some aspects, as shown in the examples, behind the SEA Directive. Some legal regulations are interpreted differently. Most of the experiences with SEA, publications and expert reports exist in spatial and landscape planning on local and regional level. But aside from the non-debateable progress in the work on SEA there are still unanswered questions, especially concerning cumulative effects and the monitoring of environmental effects. The sectoral planning types are delaying somewhat with the implementation of the SEA. Thus, the current status of the implementation of the SEA Directive can be described as ‘work in progress’; too many questions remain unanswered to be able to lean back satisfied with the achievements up to now. A more intensive debate about the SEA methodology and the SEA practice of other European member states would be particularly profitable for the discussion of open questions. In the meantime several empirical investigations are available on the environmental assessments of plans and programmes in European countries which allow for a comparison on a very abstract level (see e.g. Dalal-Clayton and Sadler, 2005, Fischer, 2006, Fischer, 2007, Jones et al., 2005 and Sadler et al., 2008). On the other hand, SEA procedures in European countries are documented, e.g. in Great Britain (see Aspinwall, 2005, Sadler et al., 2008, Therivel, 2004, Therivel and Walsh, 2006 and Therivel and Wood, 2004). But there can be identified a ‘missing link’: methodical comparisons of SEA methods more in detail could help to identify not only common questions, but also common solutions. Even when the planning processes differ between the EU Member states — the SEA procedures should have obtained a uniform standard through the SEA Directive and must be set out in a similar fashion. In addition similar methodological questions have to be solved in the SEA process since e.g. the ‘likely significant environmental effects’ of the implementation of plans basically throw up similar questions throughout Europe. In addition there are some topics, which have only been touched upon up to now and which are not yet reflected in the SEA practice. The consideration of the likely significant environmental effects on the biological diversity occurs in practice mostly using a species inventory, target or key species and/or habitats. In this way, however, the complex concept of biodiversity is not fulfilled, since in order to operationalise biodiversity for planning interests it is also necessary to consider ecosystem and functional interactions, according to Jessel et al. (2008). Additionally the development of a spatial–functional comprehensive concept and a target species concept agreed throughout the country is necessary, which extends beyond current area and species protection. Climate change can be seen as a typical cumulative environmental effect; it results through the coming together of many individual factors. Since in many areas, also in spatial and environmental planning, appropriate answers must be found to climate change, the question also has to be asked, which role can SEA play in climate change? How far can SEA contribute to a mitigation of negative effects of climate change, and how far can adaptation measures be planned with the help of SEA? In Germany this is still little heard ( Heiland, 2008 and Schomerus et al., 2008). In Great Britain management guidelines exist for practitioners with respect to dealing with climate change (e.g. Land Use Consultants, 2006) — a first step, but the complex interactions between the portrayal of plans and climate change are not penetrated by this. The question about dealing with the effects of climate change in SEA throws up the question as well about how risks can be dealt with that are brought about by climate change. The effects of climate change do not only have destructive extents that are difficult to predict, but they also occur with a probability that is very difficult to determine and affect societies or social groups with differing vulnerability or resilience. In the near future there are exciting questions to be answered, which require an understanding of social–environmental interactions in complex systems, and appropriate models and methods. Co-operation between research and practice is required here.