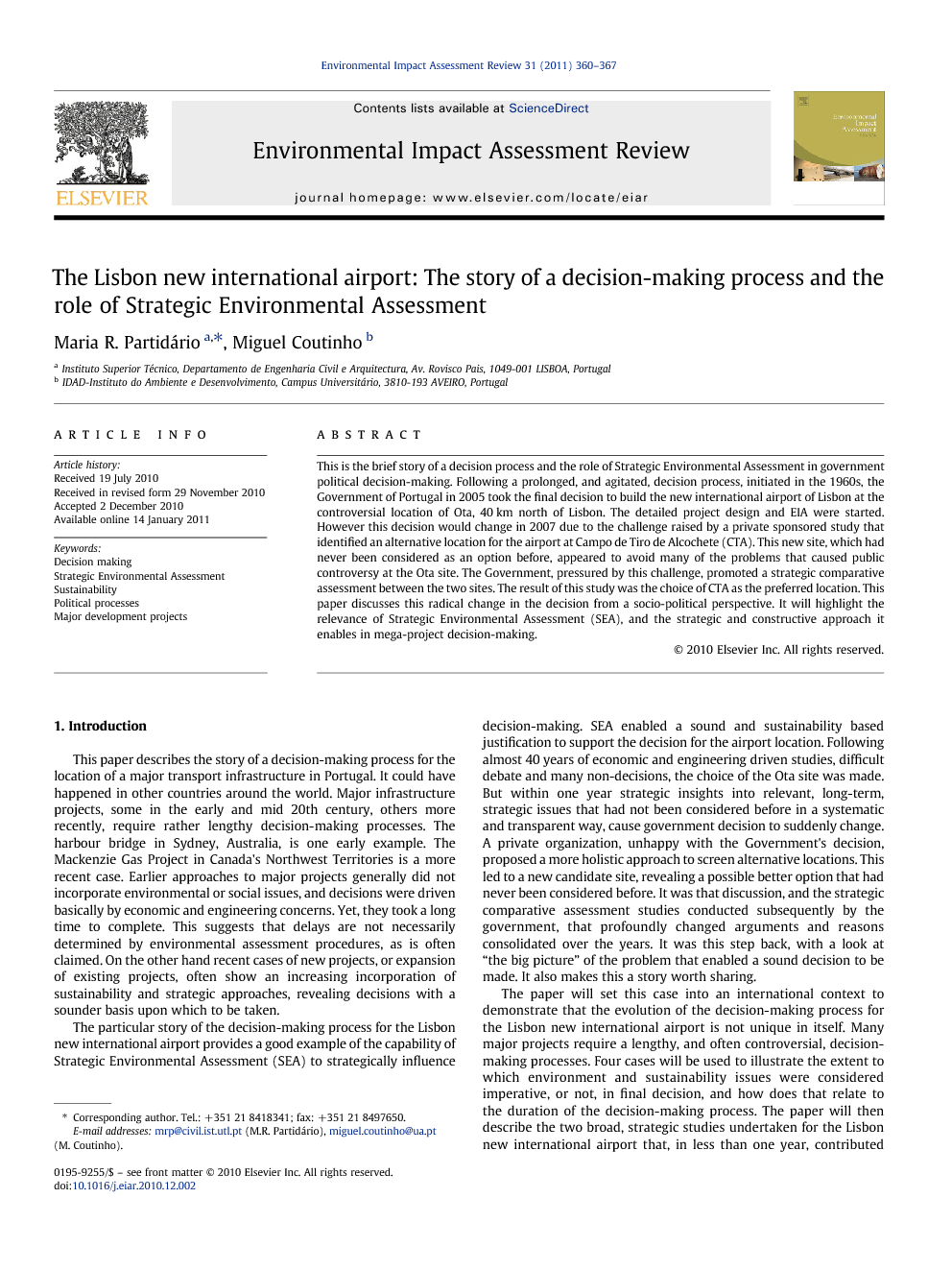 This is the brief story of a decision process and the role of Strategic Environmental Assessment in government political decision-making. Following a prolonged, and agitated, decision process, initiated in the 1960s, the Government of Portugal in 2005 took the final decision to build the new international airport of Lisbon at the controversial location of Ota, 40 km north of Lisbon. The detailed project design and EIA were started. However this decision would change in 2007 due to the challenge raised by a private sponsored study that identified an alternative location for the airport at Campo de Tiro de Alcochete (CTA). This new site, which had never been considered as an option before, appeared to avoid many of the problems that caused public controversy at the Ota site. The Government, pressured by this challenge, promoted a strategic comparative assessment between the two sites. The result of this study was the choice of CTA as the preferred location. This paper discusses this radical change in the decision from a socio-political perspective. It will highlight the relevance of Strategic Environmental Assessment (SEA), and the strategic and constructive approach it enables in mega-project decision-making.

This paper describes the story of a decision-making process for the location of a major transport infrastructure in Portugal. It could have happened in other countries around the world. Major infrastructure projects, some in the early and mid 20th century, others more recently, require rather lengthy decision-making processes. The harbour bridge in Sydney, Australia, is one early example. The Mackenzie Gas Project in Canada's Northwest Territories is a more recent case. Earlier approaches to major projects generally did not incorporate environmental or social issues, and decisions were driven basically by economic and engineering concerns. Yet, they took a long time to complete. This suggests that delays are not necessarily determined by environmental assessment procedures, as is often claimed. On the other hand recent cases of new projects, or expansion of existing projects, often show an increasing incorporation of sustainability and strategic approaches, revealing decisions with a sounder basis upon which to be taken. The particular story of the decision-making process for the Lisbon new international airport provides a good example of the capability of Strategic Environmental Assessment (SEA) to strategically influence decision-making. SEA enabled a sound and sustainability based justification to support the decision for the airport location. Following almost 40 years of economic and engineering driven studies, difficult debate and many non-decisions, the choice of the Ota site was made. But within one year strategic insights into relevant, long-term, strategic issues that had not been considered before in a systematic and transparent way, cause government decision to suddenly change. A private organization, unhappy with the Government's decision, proposed a more holistic approach to screen alternative locations. This led to a new candidate site, revealing a possible better option that had never been considered before. It was that discussion, and the strategic comparative assessment studies conducted subsequently by the government, that profoundly changed arguments and reasons consolidated over the years. It was this step back, with a look at “the big picture” of the problem that enabled a sound decision to be made. It also makes this a story worth sharing. The paper will set this case into an international context to demonstrate that the evolution of the decision-making process for the Lisbon new international airport is not unique in itself. Many major projects require a lengthy, and often controversial, decision-making processes. Four cases will be used to illustrate the extent to which environment and sustainability issues were considered imperative, or not, in final decision, and how does that relate to the duration of the decision-making process. The paper will then describe the two broad, strategic studies undertaken for the Lisbon new international airport that, in less than one year, contributed significantly to changing the mind-set that had been in place for decades. Finally an analysis of the case will be made and lessons outlined.

The SEA case presented in this paper, linking the two studies on the Lisbon new international airport, stands as a significant case-study of the success of strategic and sustainability approaches in impact assessment. It did change the outcomes. And that happened because: 1. The methodology adopted to look for a location (which was developed by the IDAD study) was a strategic scan and screen out of the potential area surrounding Lisbon, within a range of 50 km. Several criteria were followed in this first exercise, including economic, infrastructure, social and ecological, combining several policy and physical drivers. In the previous 40 years, studies had never been done this way before. 2. The subsequent SEA developed by LNEC was highly focussed on the decision that needed to be made. The decision offered to SEA was not about whether or not to do a new airport, but where and how to construct the airport. Many criticisms have been made concerning this SEA, namely by environmental NGOs, because it did not question the fundamental need for the airport. However two things have to be made clear. One is that the decision was about the best strategic location for the airport, not if an airport was needed. Second, the arguments developed to strategically discuss the most plausible location, as well as many consultations carried out with stakeholders, demonstrated that the airport was indeed needed. 3. SEA was highly focused on the critical factors that could make a difference to decision-making. Seven critical decision factors were identified and acknowledged as important by the decision-makers and other stakeholders involved. This allowed a much more structured development of studies that contributed to the SEA. Outcomes were clear and to the point. With only six months to complete the comparative study, no time could be spent on marginal issues. The bulk of the material collected went into appendices, and the main report kept only the main points of the assessment. It made it easier for decision-making to justify and communicate the decision. 4. An important success factor also relates to the quality of the identified alternative. The fact that the CTA was not privately owned but was instead state owned enabled the speedness of the administrative processes before any private speculative interests could get organized. Under these circunstances there was no basis to argue the shift of the decision could have been driven by private real estate interests. 5. Finally, another reason to make this a success story is that the outcomes of SEA met general public concerns, and responded to many questions the public had been raising over the years. These concerns were mirrored by the critical decision factors that were adopted. Of course SEA did not resolve all the problems, and there are still different views concerning even the reason for a new airport. However tensions have decreased significantly. If it were not for the global economic crisis, this decision could be said to have reached a consolidated, and generally accepted stage. The robustness of strategic studies findings, and the later engagement of stakeholders, ensured a mix of evidence supported with societal acceptance. But above all the success of SEA, and of its strategic and sustainability approach, lies upon the importance of adopting communication strategies attuned to the needs of politicians, and being less concerned with the analytical and technocratic forms of environmental assessment. It is by adjusting the language of the message to the needs of the decision-makers and forwarding the right messages quickly—in a very precise and consistent way—that one increases the chances of success, by targetting the core of decision-making. Key lessons can be drawn from this case which can be broadly applicable in SEA. One is that SEA can be useful, and is applicable, even when there are no plans or programmes to be assessed, and in the absence of binding formal or legal procedures. In this case SEA was called upon to assist a strategic decision that needed to be made, acting as the key enabler, and ensuring an integrated and broad perspective to the issue. This case demontrates the strategic outreach of SEA (demonstrated through the scan and screen for a location choice in the IDAD study), and the strategic investigation and justification of the optional choices that could be made (in the LNEC study). A second lesson is that a focused approach is fundamental to ensure pragmatism and avoid the dispersion of focus. The effectiveness of SEA was largely determined by the adoption of the seven critical decision factors. These played the dual role of structuring and ensuring an effective communicative capacity in the study. The key reports that were prepared were driven by the need to pass on a clear message, to communicate well, and to ensure a good linkage to decision-making and the transparency of the process. Thirdly the case showed the importance of allowing flexibility in the decision-making process to allow the adoption of an approach that was not prescribed, but was eminently suitable for the purpose. The willingness and ability of the study leaders to take advantage of this approach was aided by the singular features of this process. This case demonstrates clearly the enabling potential in SEA, its capacity to act as a facilitator in strategic decision-making, and its role in innovation and creativity in exploring pathways for a better solution.