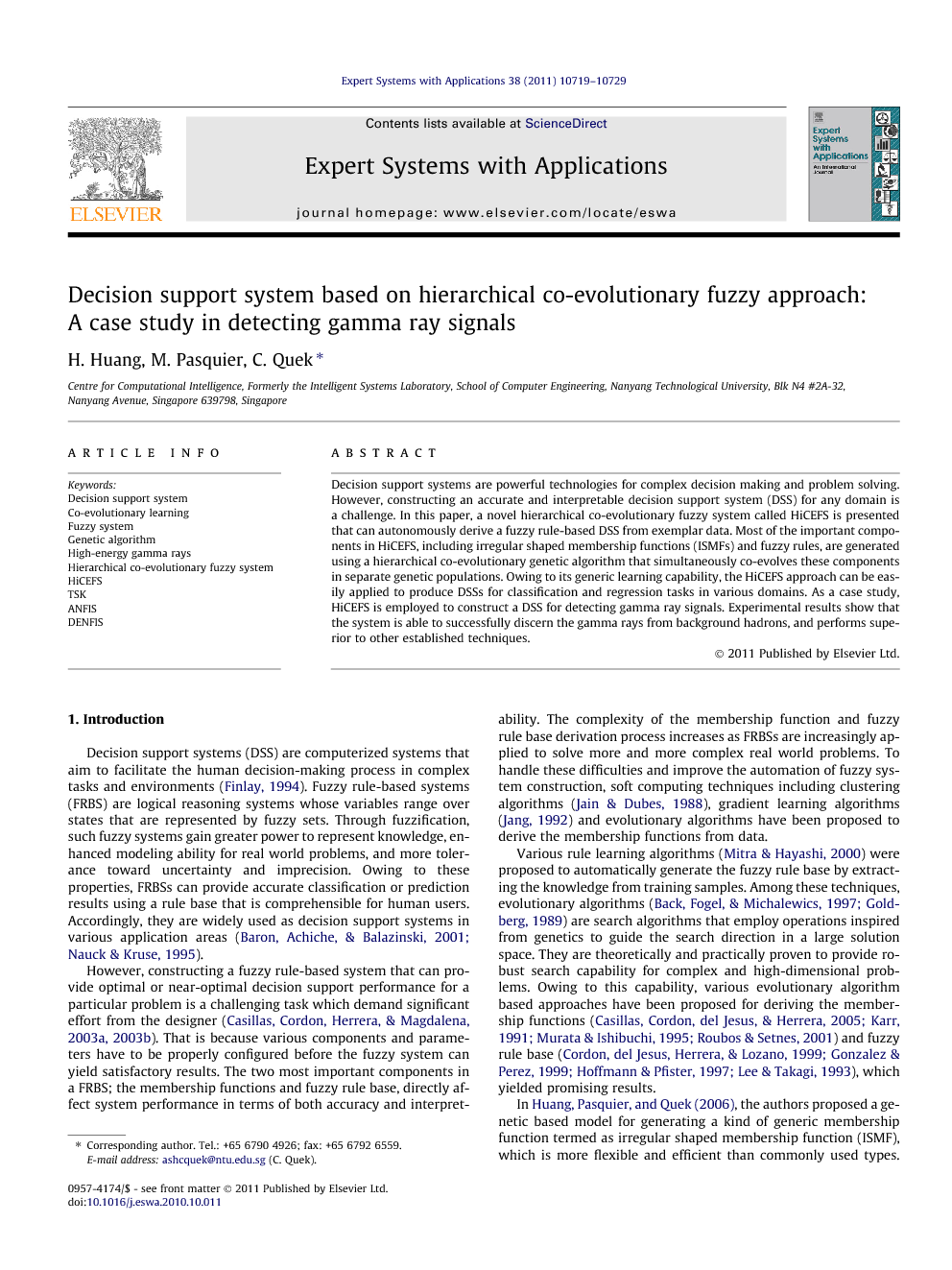 Decision support systems are powerful technologies for complex decision making and problem solving. However, constructing an accurate and interpretable decision support system (DSS) for any domain is a challenge. In this paper, a novel hierarchical co-evolutionary fuzzy system called HiCEFS is presented that can autonomously derive a fuzzy rule-based DSS from exemplar data. Most of the important components in HiCEFS, including irregular shaped membership functions (ISMFs) and fuzzy rules, are generated using a hierarchical co-evolutionary genetic algorithm that simultaneously co-evolves these components in separate genetic populations. Owing to its generic learning capability, the HiCEFS approach can be easily applied to produce DSSs for classification and regression tasks in various domains. As a case study, HiCEFS is employed to construct a DSS for detecting gamma ray signals. Experimental results show that the system is able to successfully discern the gamma rays from background hadrons, and performs superior to other established techniques.

Decision support systems (DSS) are computerized systems that aim to facilitate the human decision-making process in complex tasks and environments (Finlay, 1994). Fuzzy rule-based systems (FRBS) are logical reasoning systems whose variables range over states that are represented by fuzzy sets. Through fuzzification, such fuzzy systems gain greater power to represent knowledge, enhanced modeling ability for real world problems, and more tolerance toward uncertainty and imprecision. Owing to these properties, FRBSs can provide accurate classification or prediction results using a rule base that is comprehensible for human users. Accordingly, they are widely used as decision support systems in various application areas (Baron et al., 2001 and Nauck and D., 1995). However, constructing a fuzzy rule-based system that can provide optimal or near-optimal decision support performance for a particular problem is a challenging task which demand significant effort from the designer (Casillas et al., 2003a and Casillas et al., 2003b). That is because various components and parameters have to be properly configured before the fuzzy system can yield satisfactory results. The two most important components in a FRBS; the membership functions and fuzzy rule base, directly affect system performance in terms of both accuracy and interpretability. The complexity of the membership function and fuzzy rule base derivation process increases as FRBSs are increasingly applied to solve more and more complex real world problems. To handle these difficulties and improve the automation of fuzzy system construction, soft computing techniques including clustering algorithms (Jain & Dubes, 1988), gradient learning algorithms (Jang, 1992) and evolutionary algorithms have been proposed to derive the membership functions from data. Various rule learning algorithms (Mitra & Hayashi, 2000) were proposed to automatically generate the fuzzy rule base by extracting the knowledge from training samples. Among these techniques, evolutionary algorithms (Back et al., 1997 and Goldberg, 1989) are search algorithms that employ operations inspired from genetics to guide the search direction in a large solution space. They are theoretically and practically proven to provide robust search capability for complex and high-dimensional problems. Owing to this capability, various evolutionary algorithm based approaches have been proposed for deriving the membership functions (Casillas et al., 2005, Karr, 1991, Murata and Ishibuchi, 1995 and Roubos and Setnes, 2001) and fuzzy rule base (Cordon et al., 1999, Gonzalez and Perez, 1999, Hoffmann and Pfister, 1997 and Lee and Takagi, 1993), which yielded promising results. In Huang, Pasquier, and Quek (2006), the authors proposed a genetic based model for generating a kind of generic membership function termed as irregular shaped membership function (ISMF), which is more flexible and efficient than commonly used types. In Huang, Pasquier, and Quek (2007), a hierarchical evolutionary fuzzy system called HiCEFS was proposed, where a hierarchical co-evolutionary genetic algorithm (HCGA) serves as the main learning technique to simultaneously evolve the ISMFs on each input variable under different populations. In a previous case study, HiCEFS was applied to predict the traffic flow density based on data collected at the Pan-Island Expressway in Singapore. Results showed that the approach is able to automatically derive the appropriate number of ISMFs for each input variable. In this paper, the HCGA in HiCEFS is further extended to co-evolve the fuzzy rule base together with the membership functions (and the fuzzy inference operator). Moreover, a comprehensive case study is provided to demonstrate the capabilities of HiCEFS, described hereafter. HiCEFS has also been successfully applied in the crafting of a fuzzy predictive model for financial market trading (Huang, Pasquier, & Quek, 2009) using hierarchical co-evolution. In the fields of observational sciences, such as astronomy and particle physics, one of the most important and challenging task is to extract a small number of interesting instances from an overwhelming presence of background information, both of which have very similar characteristics. With the fast development in detector technology, more and more data is collected and awaits effective and efficient analysis. This significantly drives up the demand for decision support systems that are able to automatically analyze such data. A case study is taken in this paper to apply the HiCEFS to generate a fuzzy rule-based system for detecting the gamma ray signals. The input to the HiCEFS is a set of Monte Carlo data generated and pre-processed for a Major Atmospheric Gamma-ray Imaging Cherenkov Telescope (MAGIC) (Bock et al., 2004). The data samples belong to two classes, one originated from incident gamma rays and the other caused by hadronic showers. Accurately classifying this dataset is considered a challenging task for a DSS, due to the weak discrimination between signal (gamma) and background (hadrons) (Bock et al., 2004). This paper is organized as follows. In Section 2, the salient features of HiCEFS are briefly reviewed and analyzed. In Section 3, the process of evolving the HiCEFS to generate the decision support system is discussed in detail. In Section 4, experiments are conducted to benchmark the FRBS constructed by HiCEFS against some well-established techniques on the complex problem of detecting the gamma ray signals. Finally, some conclusions are drawn in Section 5.

This paper presents a hierarchical co-evolutionary fuzzy system called HiCEFS. One prominent property of HiCEFS is that the input feature domain is covered by irregular shape membership functions, which are generic and sufficiently flexible to represent various types of data distributions. Another main property is that a 5-level hierarchical co-evolutionary genetic algorithm (HCGA) is adopted to automatically derive the membership functions and fuzzy rule base in HiCEFS. The learning task is divided into subtasks which are efficiently co-evolved in populations from different levels in HCGA. As a case study, the HiCEFS has been successfully applied to automatically generate a fuzzy decision support system for differentiating the gamma ray signals from background. The experimental results have demonstrated the HiCEFS is able to yield favorable performance in terms of accuracy, sensitivity, specificity and interpretability when compared against other well established techniques. Although only the case study in detecting gamma signal is discussed this paper, promising results on other datasets including wine classification and traffic flow prediction were reported in Huang et al. (2007), showing that the approach is generic and able to yield accurate and interpretable decision support systems for either classification or regression problems. However, some limitations remain and HiCEFS can be further improved in several aspects. One limitation is that the computational cost is high or even prohibitive if the approach is directly applied to problems with over hundreds or even thousands of input features, such as gene expression analysis (Yeoh et al., 2002). It is more cost-effective to adopt a pre-processing with a filter feature selection technique (Guyon & Elisseeff, 2003), after which the HCGA may further select informative features during co-evolution process. Another limitation is that the approach is currently not suitable for online applications. Regardless, there is still a majority of applications where training can be conducted offline and where HiCEFS can therefore be used effectively. Furthermore, besides the optimization approaches already adopted, other techniques or improvements can be explored for further enhancing the search efficiency and reducing the computational cost of the HCGA in HiCEFS.