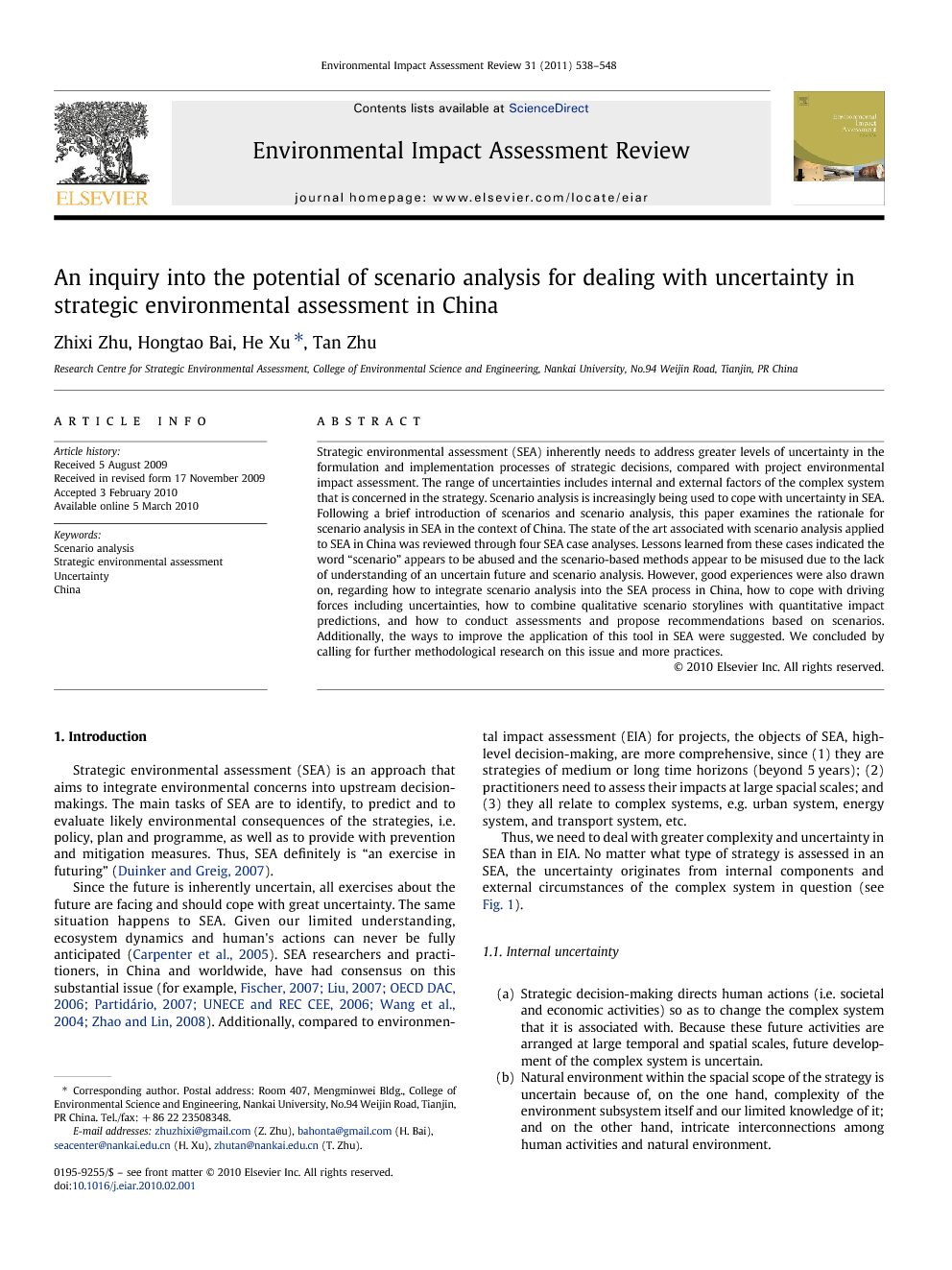 Strategic environmental assessment (SEA) inherently needs to address greater levels of uncertainty in the formulation and implementation processes of strategic decisions, compared with project environmental impact assessment. The range of uncertainties includes internal and external factors of the complex system that is concerned in the strategy. Scenario analysis is increasingly being used to cope with uncertainty in SEA. Following a brief introduction of scenarios and scenario analysis, this paper examines the rationale for scenario analysis in SEA in the context of China. The state of the art associated with scenario analysis applied to SEA in China was reviewed through four SEA case analyses. Lessons learned from these cases indicated the word “scenario” appears to be abused and the scenario-based methods appear to be misused due to the lack of understanding of an uncertain future and scenario analysis. However, good experiences were also drawn on, regarding how to integrate scenario analysis into the SEA process in China, how to cope with driving forces including uncertainties, how to combine qualitative scenario storylines with quantitative impact predictions, and how to conduct assessments and propose recommendations based on scenarios. Additionally, the ways to improve the application of this tool in SEA were suggested. We concluded by calling for further methodological research on this issue and more practices.

Strategic environmental assessment (SEA) is an approach that aims to integrate environmental concerns into upstream decision-makings. The main tasks of SEA are to identify, to predict and to evaluate likely environmental consequences of the strategies, i.e. policy, plan and programme, as well as to provide with prevention and mitigation measures. Thus, SEA definitely is “an exercise in futuring” (Duinker and Greig, 2007). Since the future is inherently uncertain, all exercises about the future are facing and should cope with great uncertainty. The same situation happens to SEA. Given our limited understanding, ecosystem dynamics and human's actions can never be fully anticipated (Carpenter et al., 2005). SEA researchers and practitioners, in China and worldwide, have had consensus on this substantial issue (for example, Fischer, 2007, Liu, 2007, OECD DAC (Organisation for Economic Cooperation and Development–Development Assistance Committee), 2006, Partidário, 2007, UNECE (United Nations Economic Commission for Europe) & REC CEE (Regional Environmental Center for Central Eastern & Europe), 2006, Wang et al., 2004 and Zhao and Lin, 2008). Additionally, compared to environmental impact assessment (EIA) for projects, the objects of SEA, high-level decision-making, are more comprehensive, since (1) they are strategies of medium or long time horizons (beyond 5 years); (2) practitioners need to assess their impacts at large spacial scales; and (3) they all relate to complex systems, e.g. urban system, energy system, and transport system, etc. Thus, we need to deal with greater complexity and uncertainty in SEA than in EIA. No matter what type of strategy is assessed in an SEA, the uncertainty originates from internal components and external circumstances of the complex system in question (see Fig. 1). 1.1. Internal uncertainty (a) Strategic decision-making directs human actions (i.e. societal and economic activities) so as to change the complex system that it is associated with. Because these future activities are arranged at large temporal and spatial scales, future development of the complex system is uncertain. (b) Natural environment within the spacial scope of the strategy is uncertain because of, on the one hand, complexity of the environment subsystem itself and our limited knowledge of it; and on the other hand, intricate interconnections among human activities and natural environment. 1.2. External uncertainty External uncertainty could have impacts on the complex system in the formulation process or implementation process of the strategy. In the context of China, it includes: (a) Uncertain changes of external natural environment, e.g. global environmental change, regional environmental problems and transboundary environmental issues, etc. (b) Uncertain social and economic conditions: (1) the changing global circumstances; (2) China's special context of economic growth and social transition; and (3) regional differences in the country. (c) Uncertain external policy. Existing policies would influence the formulation and the implementation of the strategy. Some future policies would also have effects on the implementation and consequently affect the complex system. (d) Uncertainty of future technologies. Fig. 1 shows how the complex system, influenced by both internal and external uncertainties, might develop into different possible status in the future via different pathways at different time points. In this context, there is therefore an emerging need for specific methods that are able to identify and cope with the internal and external uncertainties analyzed above. Scenario-based methods offer a way to deal with this issue. Many SEA text and manuals (OECD DAC (Organisation for Economic Cooperation and Development–Development Assistance Committee), 2006, SEPA (State Environmental Protection Administration of People's Republic of China), 2003, Therivel, 2004 and UNECE (United Nations Economic Commission for Europe) & REC CEE (Regional Environmental Center for Central Eastern & Europe), 2006) have made reference to scenario tools, but scenarios have rarely been investigated in detail (Bartlett and Brunstad, 2006 and Höjer et al., 2008). This paper first briefly introduces what scenario and scenario analysis are and their typologies. Then it elaborates why scenario analysis is needed in SEA in China. Subsequently, typical SEA cases with so-called “scenarios” in the country are reviewed and analyzed. Both good experiences and lessons learned are discussed. We also recommended the ways to improve its application in order to meet SEA's specific requirements regarding uncertainty.

To sum up, given uncertainty in SEA, in contrast to identifying a fixed prediction, a more robust way of presenting future status of the complex system and assessing future environmental conditions after implementing the proposed strategy must be adopted. Current futures literature suggests scenario analysis can offer the potential for deeper insights into inherent uncertainty in SEA. In addition, this tool is able to improve communication and participation and promote learning process in SEA. The need for applying scenario approach to SEA framework seems more evident in China, but typical SEA cases reviewed in this paper indicate the word “scenario” has been abused and scenario-based methods have been misused. However, good experiences and suggestions also illuminate a bright future for the application of this tool in SEA. The so-called “scenarios” built in many cases are neither real scenarios nor alternatives. They often stand as only simple assumptions for quantitative predictions. The root cause lies in misunderstanding of scenarios, so SEA practitioners in China must change the mode of thinking. In order to build challenging, plausible, consistent and different scenarios but not highly hypothetical alternatives, a broad range of driving forces for future development should be taken into account, their roots in the past and present must be examined, and internal causal relationships among them should be explored. In a strategy making and its SEA process, the idea situation, as Hong Kong 2030 study (HKSAR, 2007) presents, might be that SEA is integrated in strategy making process with an early start and SEA team is involved in creation and assessment of scenarios, and consequent development of alternative strategies or options. However, the facts of most SEA cases in China have been that (1) SEA practitioners can hardly participate in scenario or alternative building; and (2) alternative policies or plans are often unavailable for SEA. Since scenario exercise is always characterized as time- and resource- consuming, new construction of scenarios seems difficult in SEA. They can be taken from previous scenario exercises (Zhu and Li, 2006) and the main efforts of SEA practitioners would focus on the adaptation and seeking for stakeholders' acceptance. Another way to quick-built scenarios in SEA may be the one Mercer (1997) recommended, which addresses the use of appropriate brainstorming techniques for generating scenarios with stakeholders in a relatively short time. In methodological aspect, SEA could benefit from constructing integrated scenarios plus sub-scenarios and a combined qualitative and quantitative approach is suitable for SEA. Furthermore, reference and strategy scenarios, and normative and exploratory scenarios are of different uses for SEA. In addition to misunderstanding of scenarios, techniques selected in scenario development, particularly the rare use of participative techniques, also influence the effectiveness of scenario analysis in SEA in China. Thus, more methodological research is required to refine its application, for example exploring innovative ways to use and assess different types of scenarios, and examining how those above-introduced techniques could be efficiently utilized. Meanwhile, practicalities should be adapted through tracking practices. All of these could contribute to the development of practical guidelines on scenario analysis for practitioners as well.