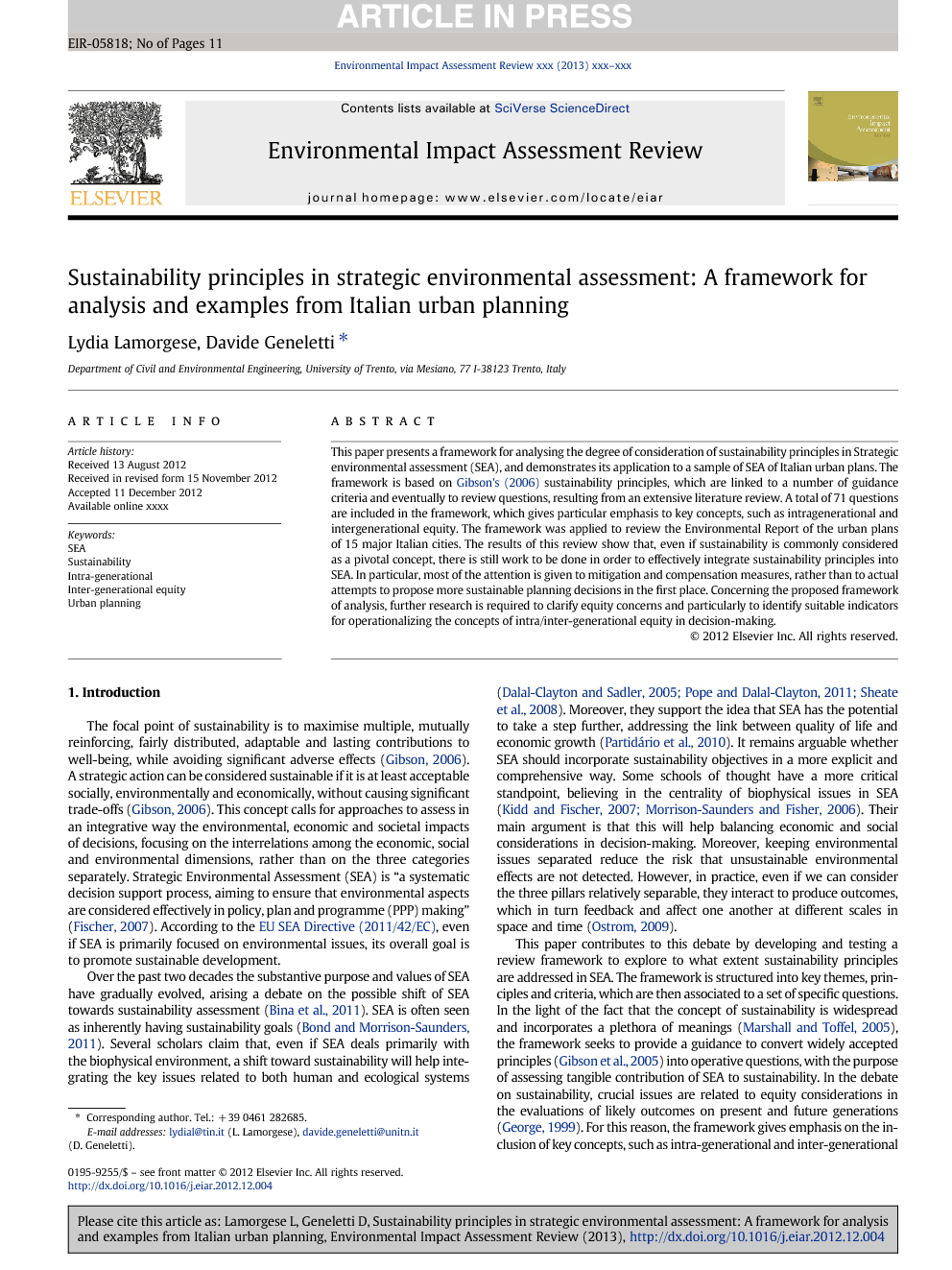 This paper presents a framework for analysing the degree of consideration of sustainability principles in Strategic environmental assessment (SEA), and demonstrates its application to a sample of SEA of Italian urban plans. The framework is based on Gibson's (2006) sustainability principles, which are linked to a number of guidance criteria and eventually to review questions, resulting from an extensive literature review. A total of 71 questions are included in the framework, which gives particular emphasis to key concepts, such as intragenerational and intergenerational equity. The framework was applied to review the Environmental Report of the urban plans of 15 major Italian cities. The results of this review show that, even if sustainability is commonly considered as a pivotal concept, there is still work to be done in order to effectively integrate sustainability principles into SEA. In particular, most of the attention is given to mitigation and compensation measures, rather than to actual attempts to propose more sustainable planning decisions in the first place. Concerning the proposed framework of analysis, further research is required to clarify equity concerns and particularly to identify suitable indicators for operationalizing the concepts of intra/inter-generational equity in decision-making.

The focal point of sustainability is to maximise multiple, mutually reinforcing, fairly distributed, adaptable and lasting contributions to well-being, while avoiding significant adverse effects (Gibson, 2006). A strategic action can be considered sustainable if it is at least acceptable socially, environmentally and economically, without causing significant trade-offs (Gibson, 2006). This concept calls for approaches to assess in an integrative way the environmental, economic and societal impacts of decisions, focusing on the interrelations among the economic, social and environmental dimensions, rather than on the three categories separately. Strategic Environmental Assessment (SEA) is “a systematic decision support process, aiming to ensure that environmental aspects are considered effectively in policy, plan and programme (PPP) making” (Fischer, 2007). According to the EU SEA Directive (2011/42/EC), even if SEA is primarily focused on environmental issues, its overall goal is to promote sustainable development. Over the past two decades the substantive purpose and values of SEA have gradually evolved, arising a debate on the possible shift of SEA towards sustainability assessment (Bina et al., 2011). SEA is often seen as inherently having sustainability goals (Bond and Morrison-Saunders, 2011). Several scholars claim that, even if SEA deals primarily with the biophysical environment, a shift toward sustainability will help integrating the key issues related to both human and ecological systems (Dalal-Clayton and Sadler, 2005, Pope and Dalal-Clayton, 2011 and Sheate et al., 2008). Moreover, they support the idea that SEA has the potential to take a step further, addressing the link between quality of life and economic growth (Partidário et al., 2010). It remains arguable whether SEA should incorporate sustainability objectives in a more explicit and comprehensive way. Some schools of thought have a more critical standpoint, believing in the centrality of biophysical issues in SEA (Kidd and Fischer, 2007 and Morrison-Saunders and Fisher, 2006). Their main argument is that this will help balancing economic and social considerations in decision-making. Moreover, keeping environmental issues separated reduce the risk that unsustainable environmental effects are not detected. However, in practice, even if we can consider the three pillars relatively separable, they interact to produce outcomes, which in turn feedback and affect one another at different scales in space and time (Ostrom, 2009). This paper contributes to this debate by developing and testing a review framework to explore to what extent sustainability principles are addressed in SEA. The framework is structured into key themes, principles and criteria, which are then associated to a set of specific questions. In the light of the fact that the concept of sustainability is widespread and incorporates a plethora of meanings (Marshall and Toffel, 2005), the framework seeks to provide a guidance to convert widely accepted principles (Gibson et al., 2005) into operative questions, with the purpose of assessing tangible contribution of SEA to sustainability. In the debate on sustainability, crucial issues are related to equity considerations in the evaluations of likely outcomes on present and future generations (George, 1999). For this reason, the framework gives emphasis on the inclusion of key concepts, such as intra-generational and inter-generational equity, and on the associated analysis of trade-offs through time and space. The framework has been tested by reviewing the SEA report of a sample of urban plans in Italy.

By developing a set of criteria for each principle, and a set of questions, the proposed framework can provide a contribution to make the broad principles of sustainability operable on the ground. Tools such as the framework developed here provide guidance for improving (and checking) the sustainability outcomes of decisions, and help overcome the gap between the stated intentions and the actual strategies. The review of SEA practices showed that several sustainability issues are clearly identified and considered in urban planning at the level of principles and objectives, but then disregarded when it comes to actions and decisions. The review concluded that, even if actions that can contribute to operationalize sustainability are found in ERs, they are far away from exhaustively addressing the seven principles of sustainability. Specifically, issues related to intra-generational and inter-generational equity are mostly disregarded. In particular, it is difficult to capture elements related to the distributional consequences on different social groups of proposed actions. Moreover, ERs seldom address the issue of trade-offs. This gap represents also a significant limit for the implementation of the democracy and governance principle. In this respect, the review showed that the attention is more focused on assuring rights of access to information and transparency in procedures, rather than openly discuss options and consequences with the involvement of all stakeholders. In the ERs, attention is paid to promote efficiency in particular by proposing measures to minimise resource use and waste production. Nevertheless, due to the fact that in general strong emphasis is given to mitigation and compensation, the focus is more on how to minimise the negative effects of proposed choices rather than on the attainment of sustainability. Therefore, we conclude that there is still room to enhance the potential for integrating sustainability principles into SEA, and that current practice does not promote sustainability as an organizing concept, according to the set of criteria and questions proposed here. The findings of this research provide several insights for future work. Concerning the review of ERs, it would be interesting to flesh out the discussion by focusing on how they address sustainability in terms of effectiveness of outcomes, and corresponding implications for decision making. In addition, the proposed review framework represents a first step to identify intra-generational and inter-generational equity metrics that should be explicitly included in strategic environmental and integrative approaches for decision making. In this context, further research is required to clarify equity concerns in the light of the plurality of approaches to sustainability and to frame suitable indicators for operationalizing intra and inter-generational equity in decision-making.