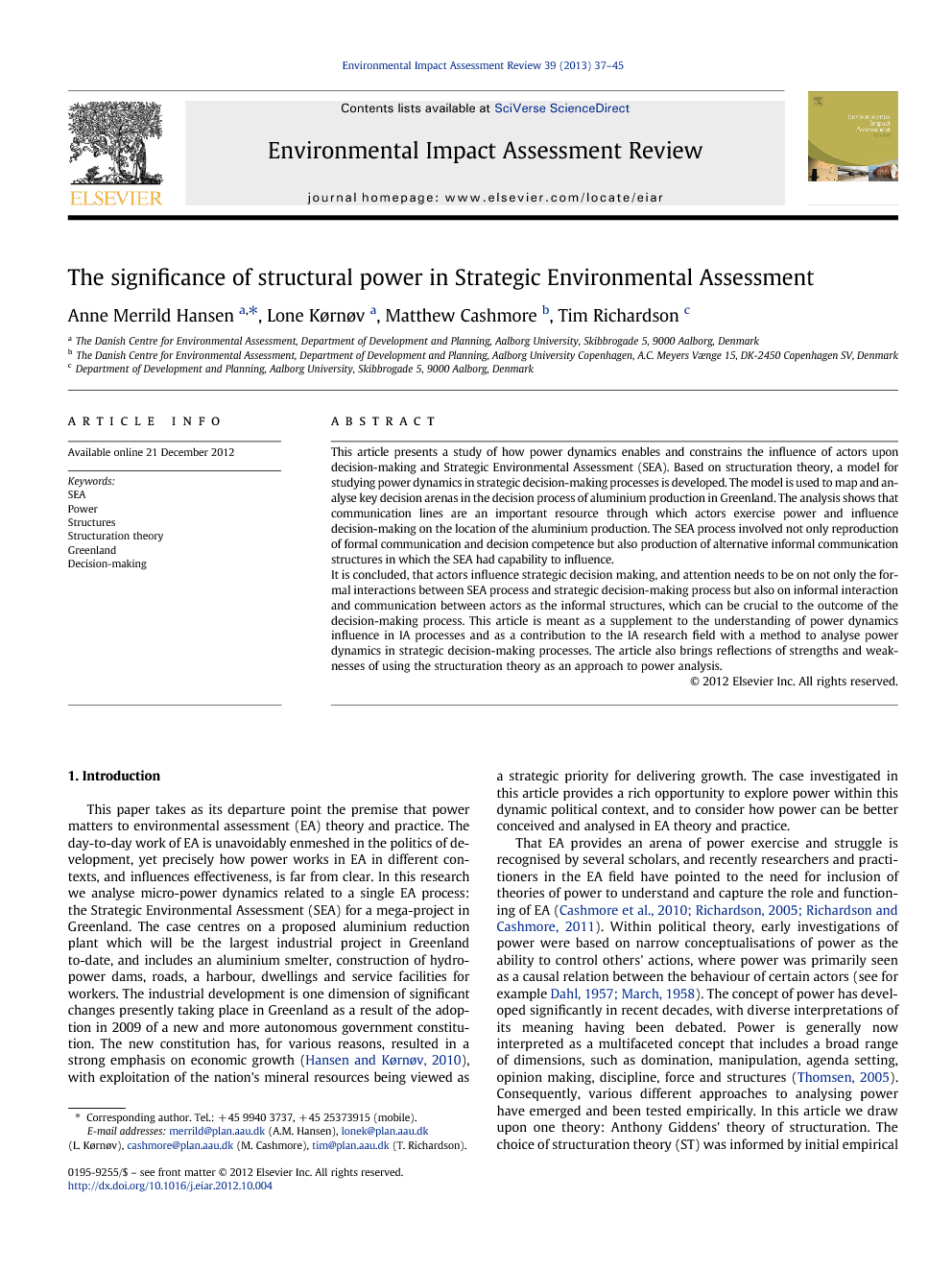 This paper takes as its departure point the premise that power matters to environmental assessment (EA) theory and practice. The day-to-day work of EA is unavoidably enmeshed in the politics of development, yet precisely how power works in EA in different contexts, and influences effectiveness, is far from clear. In this research we analyse micro-power dynamics related to a single EA process: the Strategic Environmental Assessment (SEA) for a mega-project in Greenland. The case centres on a proposed aluminium reduction plant which will be the largest industrial project in Greenland to-date, and includes an aluminium smelter, construction of hydropower dams, roads, a harbour, dwellings and service facilities for workers. The industrial development is one dimension of significant changes presently taking place in Greenland as a result of the adoption in 2009 of a new and more autonomous government constitution. The new constitution has, for various reasons, resulted in a strong emphasis on economic growth (Hansen and Kørnøv, 2010), with exploitation of the nation's mineral resources being viewed as a strategic priority for delivering growth. The case investigated in this article provides a rich opportunity to explore power within this dynamic political context, and to consider how power can be better conceived and analysed in EA theory and practice. That EA provides an arena of power exercise and struggle is recognised by several scholars, and recently researchers and practitioners in the EA field have pointed to the need for inclusion of theories of power to understand and capture the role and functioning of EA (Cashmore et al., 2010, Richardson, 2005 and Richardson and Cashmore, 2011). Within political theory, early investigations of power were based on narrow conceptualisations of power as the ability to control others' actions, where power was primarily seen as a causal relation between the behaviour of certain actors (see for example Dahl, 1957 and March, 1958). The concept of power has developed significantly in recent decades, with diverse interpretations of its meaning having been debated. Power is generally now interpreted as a multifaceted concept that includes a broad range of dimensions, such as domination, manipulation, agenda setting, opinion making, discipline, force and structures (Thomsen, 2005). Consequently, various different approaches to analysing power have emerged and been tested empirically. In this article we draw upon one theory: Anthony Giddens' theory of structuration. The choice of structuration theory (ST) was informed by initial empirical findings for the Greenlandic case study, which highlighted the important role of agency in the exercise of power in a governance system, which is in a state of transition. Within the EA field, very few studies have drawn upon explicit theories of power. The lack of research on power in relation to EA appears to be an important lacuna because, as Cashmore et al. (2010) argue, power dynamics may significantly influence how EA is understood and its effectiveness interpreted. It is important, therefore, for analyses of power in EA to be carried out in different contexts, to deepen understanding of these power dynamics. In the absence of an established research field (see Cashmore and Richardson, 2013-this issue), it is also important to explore different conceptual and methodological approaches to studying power in EA, to examine how power dynamics in EA can be interpreted. The aim of this article, then, is twofold. Firstly the paper elaborates a conceptual and methodological framework for analysing structural power in EA, inspired by Giddens' ST and methodologies of social network analysis (SNA). Secondly, structural power dynamics in the case of SEA for the proposed aluminium reduction plant in Greenland are analysed using the ST framework. It should be noted that we do not claim that the analysis conducted represents a complete, holistic analysis of power. Rather, the point is to explore what sort of account of power can be established using a structural–relational approach. We are interested in reflecting on how this could be useful more broadly within a suite of approaches for analysing power in EA (Richardson and Cashmore, 2011). This is achieved in part by reflecting critically on how the account of power found in this case makes sense in relation to the specific politics of planning and development in contemporary Greenland, and to EA practice in general. The article is structured as follows. Firstly, we introduce ST and develop a conceptual framework for analysing power structures among actors in decision-making arenas involving EA. In the methodology section, we explain how the framework was operationalised to study decision-making, and introduce the aluminium reduction plant case and the research methods employed. Next, the research findings are presented and discussed, reasoning and explaining how power dynamics enabled or constrained actors' influence on decision-making. We conclude with reflections on the insights provided by, and utility of, the conceptual framework and the corresponding research strategy, and by considering whether the approach to analysing power used in this paper provides insights that could be practically useful to development actors in Greenland and the wider EA community.

This research provides an illustration of how an analysis of power in EA can be assembled through a focus on interaction and the significance of agency in securing an influence for EA in decision-making. These are not novel findings. Nevertheless, they are arrived at through the application of a particular analytical lens which foregrounds somewhat different issues compared with previous EA research: notably, the productivity of power and the use of communication as a resource. The analysis underlines the importance of the interactions between, and interdependences of, actors when studying the effects and effectiveness of EA tools. Of course, the possibility that existing structures are not reproduced, and that actors can express agency in pursuing their particular interests may be more a feature of non-programmed decision-making, where administration is changed during the process due to lack of experience, such as in the case studied here where governance structures are in flux. For programmed decisions, where a high degree of routine (i.e. structure) is involved, the status quo may be more likely to prevail. In this research, Giddens' ST, an influential albeit essentially superseded theoretical position, has been used as a theoretical lens through which to explore the micro-power dynamics in which the use of EA is enmeshed, as expressed through the interaction between structure and agency, the use of communication as a resource, and the notion of decision competence. There are important limitations associated with what can be generalised from this research. The results are valuable, nevertheless, for they highlight actors' situated practices in the performance of what we have labelled ‘transformative capacity’. They thereby serve to supplement our fledging understanding of how power is implicated in the practices of EA. The application of ST to this case study also raises some interesting questions concerning the focus on situated interactions. According to Giddens, structures seem not to exist in a time-space dimension: “There is no structure in human social life, apart from the continuity of processes of structuration … It is essential to recognise that structures only exist as the reproductive conduct of situated actors with definite incentives and interest” (Giddens, 1976:118). It follows that structures only exist at the moment at which production and/or reproduction takes place. Arguably, this downplays the significance of macro structures within society, which are more deeply embedded, through norms, values and status. It is recommended that further research is undertaken to explore the interaction between structure and agency under embedded institutional conditions. Bearing in mind the complex dynamics of power and structuration, the second important suggestion for future research is for additional studies to explore whether, how, and in what ways actors in EA processes exercise power to bring about change. The concern for individual agency widens the focus beyond formal procedures, which has been a strong focus in EA scholarship. In interpreting power as facilitative and actors as resourceful agents, it may become possible to better theorise the circumstances in which the effectiveness of EA tools at influencing decision-making can be substantially enhanced.