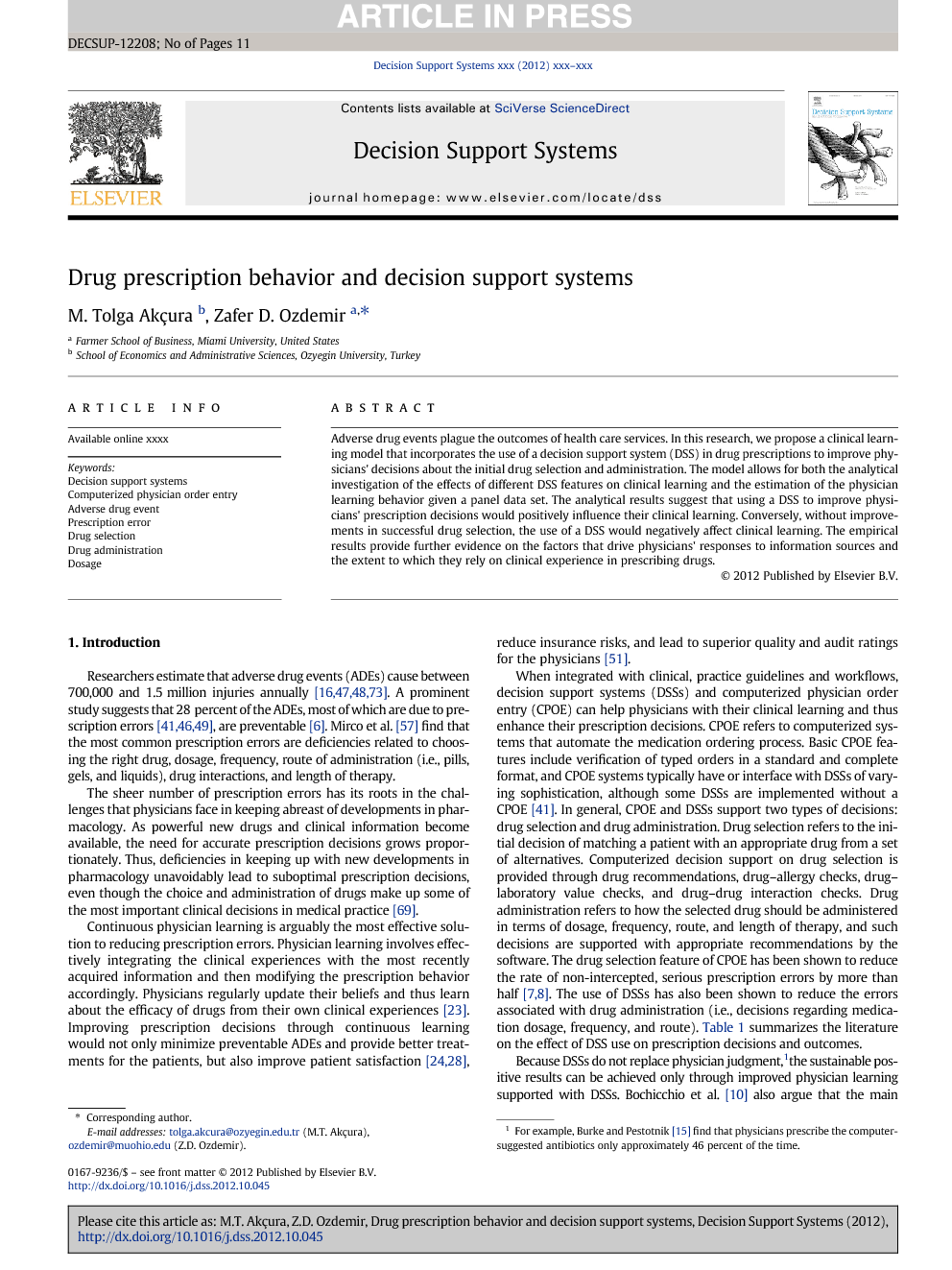 Adverse drug events plague the outcomes of health care services. In this research, we propose a clinical learning model that incorporates the use of a decision support system (DSS) in drug prescriptions to improve physicians' decisions about the initial drug selection and administration. The model allows for both the analytical investigation of the effects of different DSS features on clinical learning and the estimation of the physician learning behavior given a panel data set. The analytical results suggest that using a DSS to improve physicians' prescription decisions would positively influence their clinical learning. Conversely, without improvements in successful drug selection, the use of a DSS would negatively affect clinical learning. The empirical results provide further evidence on the factors that drive physicians' responses to information sources and the extent to which they rely on clinical experience in prescribing drugs.

Previous information systems research in health care has examined the business value of information technology [26] and its adoption within the sector [9], [13], [14], [35], [36], [44], [55], [58] and [64]. We contribute to this literature by investigating when and how DSSs can improve physicians' clinical learning and thus improve their prescription decisions in terms of choosing and administering the right drug. The results have implications on how to increase the perceived usefulness of the technology and facilitate adoption [20] and [60]. Bates et al. [8] indicate that physicians tend to be more pragmatic in their acceptance of the technology. The literature suggests that physicians value the usefulness of information technologies much more than their ease of use. Keil et al. [43, p. 89] note that “no amount of ease of use will compensate for low usefulness.” Usefulness is typically operationalized as increasing physicians' productivity, improving the quality of care, and enhancing their effectiveness. Because facilitating clinical learning is perhaps the most critical benefit of DSSs for physicians, we can argue that drug selection features are of paramount importance in the adoption of DSSs that are used in the prescription process. Usefulness of DSSs is also critical from an educational perspective. Teich et al. [70] question whether DSSs really help the medical education of physicians-in-training. They acknowledge that DSSs improve care in the hospital, but they also suggest that it is not known how physicians perform in other settings without computerized decision support after having been trained with it. One possibility is that physicians learn some facts less well because of their growing dependence on the computer to supply important pieces of information. Another possibility is that clinical learning is enhanced because guidelines and recommendations are frequently re-presented and reinforced at crucial moments. By focusing on the benefits of DSSs on clinical learning in this study, we tend to support the latter argument in that physicians should be able to carry over their improved skills to settings that lack a DSS. Our learning model provides analytical justification for the existing empirical results in the literature that associate DSS adoption with reduced ADE rates. Differences in clinical use of DSSs have been documented empirically. For example, Grant et al. [34] find that primary care physicians are associated with greater use of DSSs. The results of this study provide implications on which types of decision support offer more potential for which categories of physicians and, correspondingly, on which DSS implementations are more likely to fail. Despite the documented benefits and the mandates, the widespread clinical acceptance of DSSs has been lacking, and this has been a concern for researchers and medical informaticians [4], [40] and [42]. A recent study estimates that under current conditions, computerized order entry adoption in urban hospitals will not reach 80 percent penetration until 2029 [32]. There is a clear need to help facilitate the adoption, and our results can help policy makers design better incentives and mechanisms so that they can identify and target physicians who stand to benefit the most from computerized decision support. Our empirical estimations highlight the importance of physician-level differences and salient physician characteristics that affect clinical behavior and DSS use. Coscelli [22] argue that clinical DSSs should be viewed as socio-technical systems in which an individual physician's social background and demographics also play a role in the success of the adoption of the system. In a somewhat related vein, our results show that physician specialty and location have significant effects on the overall physician response to information sources and that the specialists and physicians in low-income areas are likely to benefit more from decision support on drug selection than general practice physicians and physicians located in high-income areas. Ray et al. [63] report that more than one-quarter of office-based Tennessee physicians mis-prescribed an antibiotic (i.e., tetracycline), which is associated with permanent discoloration of developing teeth, to young children. The authors show that rural family and general practitioners faced a high risk of prescribing these and other agents (e.g., chloramphenicol) in a potentially unsafe manner. Such findings illustrate that general practitioners may have more “room” for learning about pharmacology than specialists, in which case they may benefit more from computerized decision support over time, in line with our results. However, because DSS use lengthens the duration of a physician–patient encounter ([68] has shown that it takes 245 and 113 seconds to make a decision with and without the DSS, respectively), such benefits may be difficult to realize in low-income areas that typically exhibit relatively high demand for physician services. Thus, DSS developers should incorporate their products into physician workflows well, especially when targeting physicians who work in low-income areas. This study offers several future research directions. An immediate application of the learning model presented herein is the individual identification of the physicians who would benefit the most from decision support and those who may be distracted by it. Such a targeted approach may facilitate the diffusion of DSS adoption and may provide new avenues to overcome the adoption difficulties [61]. Researchers can also apply our learning model to specific types of DSSs to understand the role of more detailed aspects of these systems on physician learning. For example, researchers can examine, both analytically and by observing actual physician behavior, which types of DSSs (e.g., optimization systems, expert systems, and data mining tools) and which form of recommendation systems (e.g., those that employ collaborative-filtering versus content search through machine learning) are most promising from a learning perspective. Additionally, a similar methodology can be used to investigate the role of DSSs used for physician training. The dynamic nature of our model makes it a suitable framework for capturing the relative importance of external information sources (over time) in supporting physicians' prescribing decisions. A similar methodology can also be used to explore the optimal recency, frequency, and amount of training needed for each physician. Finally, with suitable modifications, the methodology developed here can be applied to understand and improve the professional learning of other knowledge workers.