Journal : Physica A: Statistical Mechanics and its Applications, Available online 24 May 2013 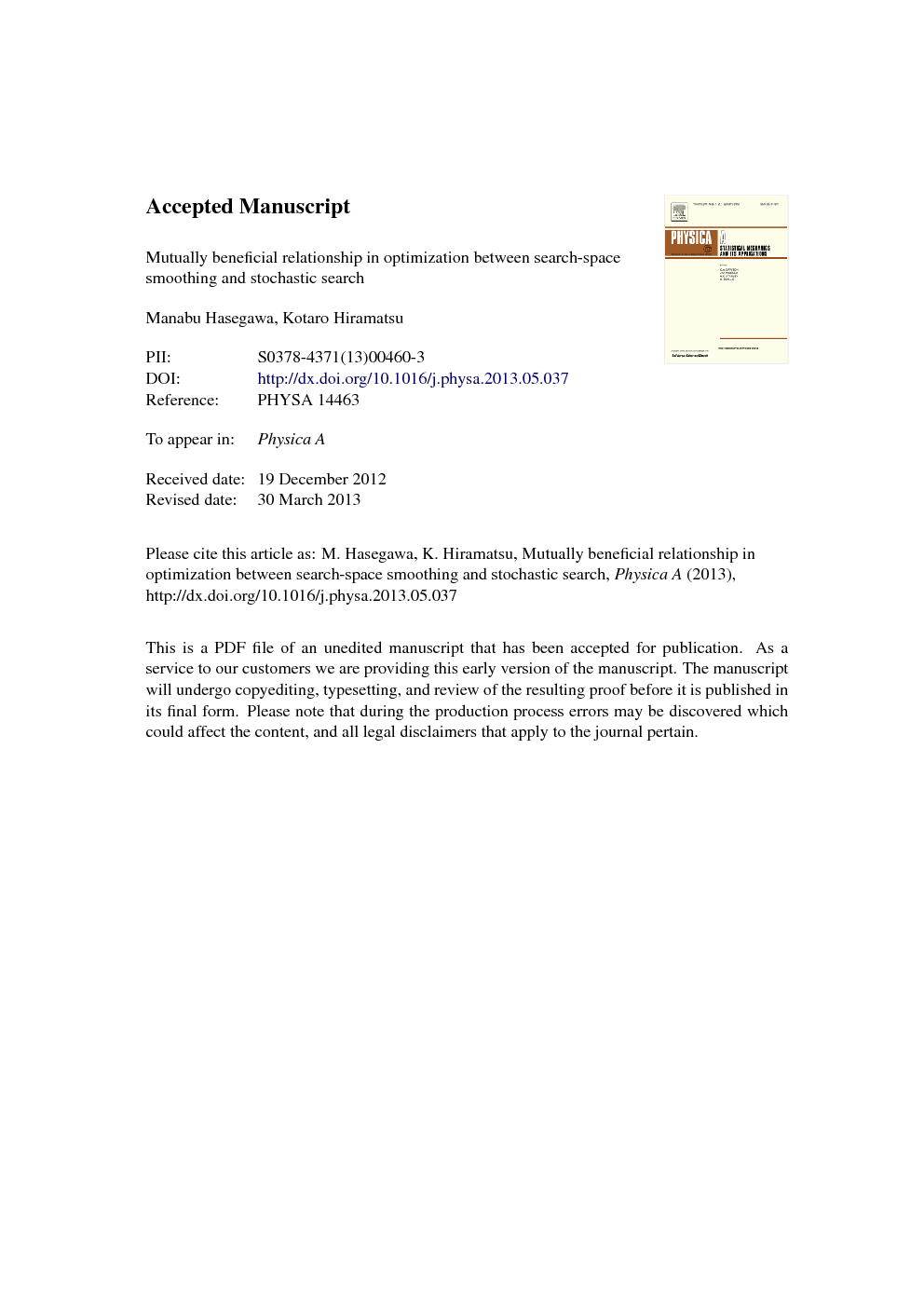 The effectiveness of the Metropolis algorithm (MA) (constant-temperature simulated annealing) in optimization by the method of search-space smoothing (SSS) (potential smoothing) is studied on two types of random traveling salesman problems. The optimization mechanism of this hybrid approach (MASSS) is investigated by analyzing the exploration dynamics observed in the rugged landscape of the cost function (energy surface). The results show that the MA can be successfully utilized as a local search algorithm in the SSS approach. It is also clarified that the optimization characteristics of these two constituent methods are improved in a mutually beneficial manner in the MASSS run. Specifically, the relaxation dynamics generated by employing the MA work effectively even in a smoothed landscape and more advantage is taken of the guiding function proposed in the idea of SSS; this mechanism operates in an adaptive manner in the de-smoothing process and therefore the MASSS method maintains its optimization function over a wider temperature range than does the MA.

Focusing on the mutual influence between smoothing heuristics and stochastic search, we investigated the optimization characteristics of the MASSS method, the combination of the SSS method and the MA, and obtained a clear picture of how this hybrid approach works in its optimization process. Both the SSS method and the MA have a function that makes the system explore lower-lying basins in the solution space, and the mutual enhancement of their respective functions offers better optimization characteristics to an the MASSS method. Specifically, the relaxation dynamics generated by employing the MA work effectively also in a smoothed landscape and take more advantage of the guiding function of the SSS method. Furthermore, this mechanism functions in the smoothed landscape matched with the operating temperature and therefore the MASSS method maintains its performance over a wider temperature range than the MA. The former is the benefit of applying the MA to the SSS method and the latter the benefit in the opposite direction. Although the experimental analysis was performed only for the solution of the TSPs, and for the limited search rule and smoothing function, it is hoped that the present baseline study in the landscape paradigm will be informative to the study and implementation of possible variants.