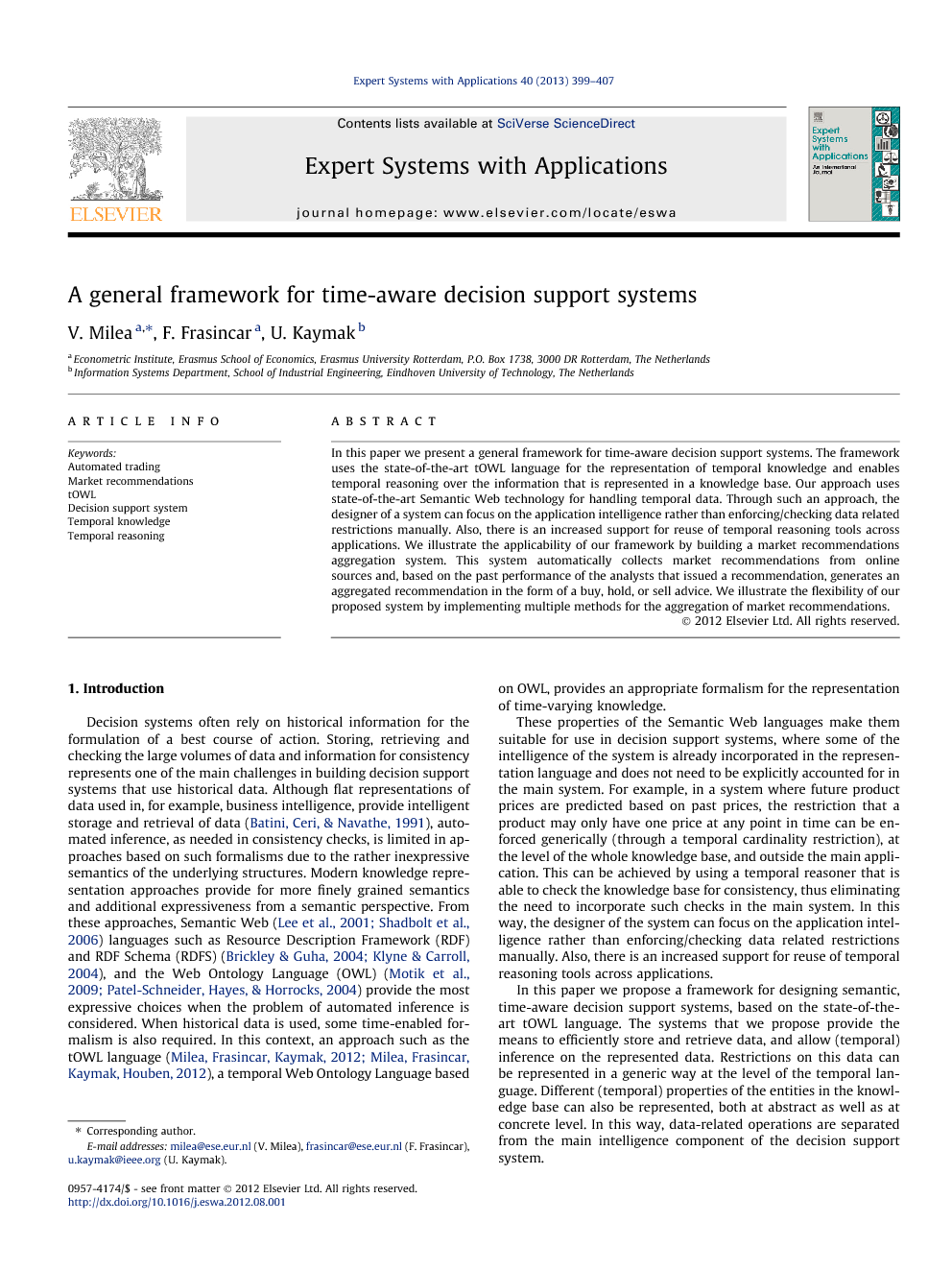 In this paper we present a general framework for time-aware decision support systems. The framework uses the state-of-the-art tOWL language for the representation of temporal knowledge and enables temporal reasoning over the information that is represented in a knowledge base. Our approach uses state-of-the-art Semantic Web technology for handling temporal data. Through such an approach, the designer of a system can focus on the application intelligence rather than enforcing/checking data related restrictions manually. Also, there is an increased support for reuse of temporal reasoning tools across applications. We illustrate the applicability of our framework by building a market recommendations aggregation system. This system automatically collects market recommendations from online sources and, based on the past performance of the analysts that issued a recommendation, generates an aggregated recommendation in the form of a buy, hold, or sell advice. We illustrate the flexibility of our proposed system by implementing multiple methods for the aggregation of market recommendations.

Decision systems often rely on historical information for the formulation of a best course of action. Storing, retrieving and checking the large volumes of data and information for consistency represents one of the main challenges in building decision support systems that use historical data. Although flat representations of data used in, for example, business intelligence, provide intelligent storage and retrieval of data (Batini, Ceri, & Navathe, 1991), automated inference, as needed in consistency checks, is limited in approaches based on such formalisms due to the rather inexpressive semantics of the underlying structures. Modern knowledge representation approaches provide for more finely grained semantics and additional expressiveness from a semantic perspective. From these approaches, Semantic Web (Lee et al., 2001 and Shadbolt et al., 2006) languages such as Resource Description Framework (RDF) and RDF Schema (RDFS) (Brickley and Guha, 2004 and Klyne and Carroll, 2004), and the Web Ontology Language (OWL) (Motik et al., 2009 and Patel-Schneider et al., 2004) provide the most expressive choices when the problem of automated inference is considered. When historical data is used, some time-enabled formalism is also required. In this context, an approach such as the tOWL language (Milea, Frasincar, Kaymak, 2012a and Milea, Frasincar, Kaymak, Houben, 2012b), a temporal Web Ontology Language based on OWL, provides an appropriate formalism for the representation of time-varying knowledge. These properties of the Semantic Web languages make them suitable for use in decision support systems, where some of the intelligence of the system is already incorporated in the representation language and does not need to be explicitly accounted for in the main system. For example, in a system where future product prices are predicted based on past prices, the restriction that a product may only have one price at any point in time can be enforced generically (through a temporal cardinality restriction), at the level of the whole knowledge base, and outside the main application. This can be achieved by using a temporal reasoner that is able to check the knowledge base for consistency, thus eliminating the need to incorporate such checks in the main system. In this way, the designer of the system can focus on the application intelligence rather than enforcing/checking data related restrictions manually. Also, there is an increased support for reuse of temporal reasoning tools across applications. In this paper we propose a framework for designing semantic, time-aware decision support systems, based on the state-of-the-art tOWL language. The systems that we propose provide the means to efficiently store and retrieve data, and allow (temporal) inference on the represented data. Restrictions on this data can be represented in a generic way at the level of the temporal language. Different (temporal) properties of the entities in the knowledge base can also be represented, both at abstract as well as at concrete level. In this way, data-related operations are separated from the main intelligence component of the decision support system. The framework that we introduce is deployed in a practical context. We illustrate how such semantic, time-enabled decision support systems can be used by means of an example from the financial domain. The finance area has received attention in the development of expert systems, both from a theoretical perspective, as for example in Blue and Andoh-Baidoo, 2010 and Matsatsinis et al., 1997, as well as in more practical contexts, such as (Falavigna, 2012, Nedovic and Devedzic, 2002 and Rada, 2008). We choose the aggregation of market recommendations as a proof-of-concept. Market recommendations are advices, in the form of indicated courses of action, issued by financial analysts, regarding the stock of a certain company. These recommendations most often materialize in buy, hold, or sell advices, and are issued at different times. Since multiple analysts can issue such recommendations, more often than not, at a specific point in time, a company may have recommendations issued by different analysts. When these recommendations diverge, in the sense that there is no consensus within the analyst group whether an asset should be bought, held, or sold, choosing the appropriate course of action might not be obvious. The system that we present investigates which aggregation method for market recommendations gives the best results, given the evidence from the past. In investigating which approach provides the best results for the aggregation of market recommendations, we consider two different alternatives: a majority voting approach, in which we choose the recommendation to which most analysts concur, and an approach that takes into account the analysts’ past performance when deciding the course of action with the highest expected performance. For measuring the analysts’ past performance, we rely on the Sharpe ratio (Sharpe, 1966). The example that we present contains several features that make it interesting to consider. First, the recommendations issued by analysts either have a limited validity in time, or hold until a new recommendation is issued. By relying on the tOWL language for the representation of recommendations, we can define default durations for advices, and also set as ending valid time for a recommendations the time when a new recommendation is issued by the same analyst, regarding the same company. Determining which recommendations hold at any point in time can also be achieved generically due to the timeslices representation used by the tOWL language. This allows us to determine, at any point in time, which recommendations have been issued by an analyst in the past, which in turn allows for determining the past performance of the analysts. The outline of the paper is as follows. In Section 2 we provide an overview of the research related to the subject of this paper. The tOWL language, the basis of the framework presented in the paper, is presented in Section 3. The semantic, time-aware framework that we propose is presented in Section 4. The application, as well as the methodology we use for aggregating market recommendations is presented in Section 5. Our results and a discussion of the results are presented in Section 6. Finally, we conclude in Section 7.

This paper describes a framework for time-aware decision support systems. The framework we propose relies on the state-of-the-art tOWL language for the representation of temporal information. We illustrate how temporal information can be used in decision support systems in a systematic, consistent way. Additionally, by relying on such an approach, the process of data storage and retrieval, as well as consistency checks on the data are separated from the main application. The added value of the paper consists of a framework for temporal decision support systems that relies on state-of-the-art Semantic Web technology for handling temporal knowledge. We illustrate the applicability of our system in a practical context, by extracting, storing, and aggregating information related to market recommendations. By implementing different aggregation methods we demonstrate the flexibility of the proposed system. Additionally, we show how the systematic storing of knowledge by relying on the tOWL language enables different models to be deployed within the same application, models that (may) use different pieces of data from the information available within the knowledge base(s). Although the system presented in this paper is used for an application in the financial domain, the applications of the system are not restricted to this domain. For making use of the proposed framework, one needs to define a tOWL domain ontology, the input information, the historical data, and an application engine able to process all this temporal information into a valuable output. We envision applications in the automated processing of news by news agencies, accompanied by tagging and classification of these news items based on subject, geographic area, entities involved, i.e., persons and locations. As future work we plan to extend the proposed framework to exploit tOWL expressions directly in the information extraction phase, based on the tOWL ontology and knowledge base(s) used in the application. This can be achieved in different ways, one of which is the definition of patterns based on the the knowledge base that can directly be used by the information extraction module.