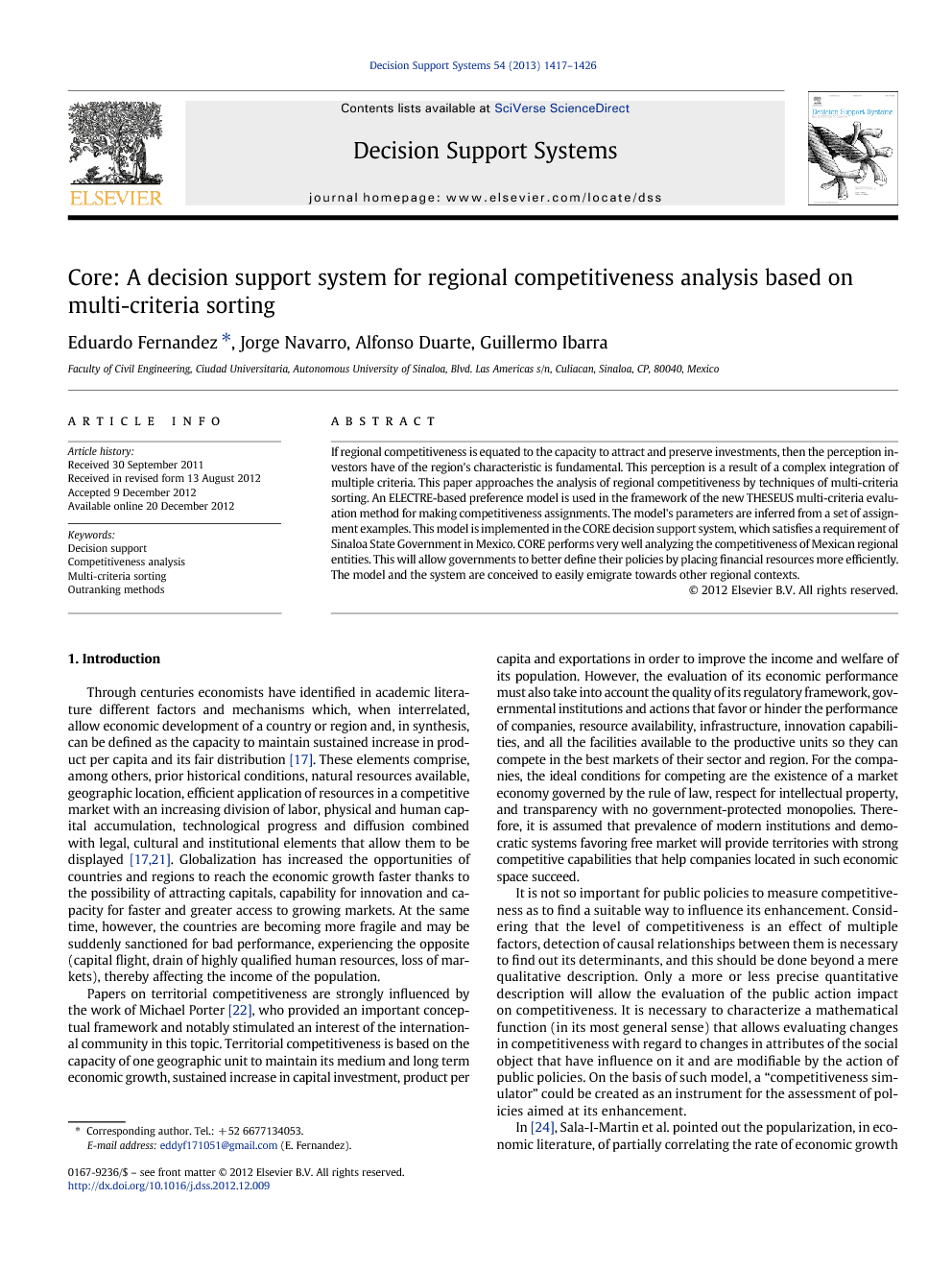 If regional competitiveness is equated to the capacity to attract and preserve investments, then the perception investors have of the region's characteristic is fundamental. This perception is a result of a complex integration of multiple criteria. This paper approaches the analysis of regional competitiveness by techniques of multi-criteria sorting. An ELECTRE-based preference model is used in the framework of the new THESEUS multi-criteria evaluation method for making competitiveness assignments. The model's parameters are inferred from a set of assignment examples. This model is implemented in the CORE decision support system, which satisfies a requirement of Sinaloa State Government in Mexico. CORE performs very well analyzing the competitiveness of Mexican regional entities. This will allow governments to better define their policies by placing financial resources more efficiently. The model and the system are conceived to easily emigrate towards other regional contexts.

Through centuries economists have identified in academic literature different factors and mechanisms which, when interrelated, allow economic development of a country or region and, in synthesis, can be defined as the capacity to maintain sustained increase in product per capita and its fair distribution [17]. These elements comprise, among others, prior historical conditions, natural resources available, geographic location, efficient application of resources in a competitive market with an increasing division of labor, physical and human capital accumulation, technological progress and diffusion combined with legal, cultural and institutional elements that allow them to be displayed [17] and [21]. Globalization has increased the opportunities of countries and regions to reach the economic growth faster thanks to the possibility of attracting capitals, capability for innovation and capacity for faster and greater access to growing markets. At the same time, however, the countries are becoming more fragile and may be suddenly sanctioned for bad performance, experiencing the opposite (capital flight, drain of highly qualified human resources, loss of markets), thereby affecting the income of the population. Papers on territorial competitiveness are strongly influenced by the work of Michael Porter [22], who provided an important conceptual framework and notably stimulated an interest of the international community in this topic. Territorial competitiveness is based on the capacity of one geographic unit to maintain its medium and long term economic growth, sustained increase in capital investment, product per capita and exportations in order to improve the income and welfare of its population. However, the evaluation of its economic performance must also take into account the quality of its regulatory framework, governmental institutions and actions that favor or hinder the performance of companies, resource availability, infrastructure, innovation capabilities, and all the facilities available to the productive units so they can compete in the best markets of their sector and region. For the companies, the ideal conditions for competing are the existence of a market economy governed by the rule of law, respect for intellectual property, and transparency with no government-protected monopolies. Therefore, it is assumed that prevalence of modern institutions and democratic systems favoring free market will provide territories with strong competitive capabilities that help companies located in such economic space succeed. It is not so important for public policies to measure competitiveness as to find a suitable way to influence its enhancement. Considering that the level of competitiveness is an effect of multiple factors, detection of causal relationships between them is necessary to find out its determinants, and this should be done beyond a mere qualitative description. Only a more or less precise quantitative description will allow the evaluation of the public action impact on competitiveness. It is necessary to characterize a mathematical function (in its most general sense) that allows evaluating changes in competitiveness with regard to changes in attributes of the social object that have influence on it and are modifiable by the action of public policies. On the basis of such model, a “competitiveness simulator” could be created as an instrument for the assessment of policies aimed at its enhancement. In [24], Sala-I-Martin et al. pointed out the popularization, in economic literature, of partially correlating the rate of economic growth to a substantial number of variables with this kind of regression models: γ=α+β1⋅x1+β2⋅x2+…+βn⋅xn+εγ=α+β1⋅x1+β2⋅x2+…+βn⋅xn+ε Turn MathJax on where γ is the dependent variable and xi are the explanatory or causal variables; α and βi are constants to be determined; and ε represents the magnitude of error. If the assessment of competitiveness is seen as a multicriteria decision problem, and if γ is a “proxy” variable reflecting competitiveness, the above model can be seen as a weighted-sum value function. This kind of models requires mutual preference independence and constant compensation ratio, which are quite severe mathematical conditions. Interaction among criteria is not modeled. In order to reflect such interaction, a non-additive value functional model based on the Choquet Integral should be used (cf. [2], [14] and [18]). As the above model is totally compensatory, the extremely negative evaluation of some causal variables can be compensated with positive evaluations of other attributes. A partially compensatory model, including capability to exercise the veto when the status of some attributes is very unfavorable, could reflect better the perception of competitiveness. To the best of our knowledge, this work approaches the analysis of regional competitiveness for the first time by modern techniques of multicriteria decision analysis (MCDA). The aim of MCDA is to assist a decision maker (DM) in choosing, ranking and sorting alternatives (actions, objects) according to multiple criteria [4]. Many decision support systems (DSSs) have been designed using MCDA to help DMs in analyzing problems and making easier decisions (e.g. [3], [4], [5], [8] and [20]). Here, we propose an assessment of competitiveness by using a fuzzy outranking relation model. Fuzzy relations are an excellent alternative to the functional approach, since they are more general, have greater expressive capacity and are capable of modeling situations of intransitivity and incomparability [13]. The main aim of this paper is to present a “what if” analyzer, which is in fact a “competitiveness simulator”. It uses certain reference information about competitiveness in order to construct a causal model in terms of many explanatory variables. Thus, a DM can explore the effect of changes on some causal variables, performing “what if” analyses on which public policies for competitiveness improvements can be designed. This model is implemented in a decision support system which satisfies a need of Sinaloa State Government in Mexico. This paper is structured as follows: some theoretical background is presented in 2 and 3. The main models are described in Section 4. The CORE system implementation is discussed in Section 5, and some experimental results are given in Section 6. Final conclusions are presented in Section 7.

If the regional competitiveness can be understood as capacity to attract and preserve investments, then the perception investors have of the region's characteristic is fundamental. This perception, either positive or negative to different extents, is a result of a complex integration of multiple criteria. This paper has perhaps the merit of enlightening the competitiveness analysis from a dominant multicriteria perspective. The competitiveness evaluation is here considered as a multicriteria sorting problem. In CORE decision support framework, the new outranking-based THESEUS method is applied to making the assignments of regional entities to competitiveness categories. This method performed very well analyzing the competitiveness of 390 Mexican regional entities, which is the universe of the currently available information. The model of competitiveness based on constructing a weighted-sum function is clearly outperformed. CORE declines to construct an index of competitiveness for several reasons: i) limitations of weighted sum function models that are unable to reflect preference dependence, veto, incomparability and lack of compensation; ii) arbitrariness of some parameters appearing in the indices; iii) competitiveness is a complex, integrating concept, which does not allow description by one sole economic dimension; its evaluation is essentially indirect; and iv) if there are attempts to use evaluations of human experts, these latter feel more comfortable when expressing their judgments in qualitative scales. CORE substitutes the numerical measure of an index for an evaluation within categories in a scale that can be enough subtle as to agree with user's wishes. The response is coarser than that of an index, but considerably more robust and consistent with approximate and indirect character of the input information. CORE is a tool placed at a disposal of the Government of Sinaloa and the rest of the country. This system, which reflects in a robust way the level of competitiveness of different regions, allows governments to better define their policies by placing financial resources more efficiently. Although the present version of CORE uses causal variables, factors and reference information from the Mexican Institute for Competitiveness, the system is conceived to easily emigrate towards other sets of explanatory variables, factors of competitiveness and reference information.