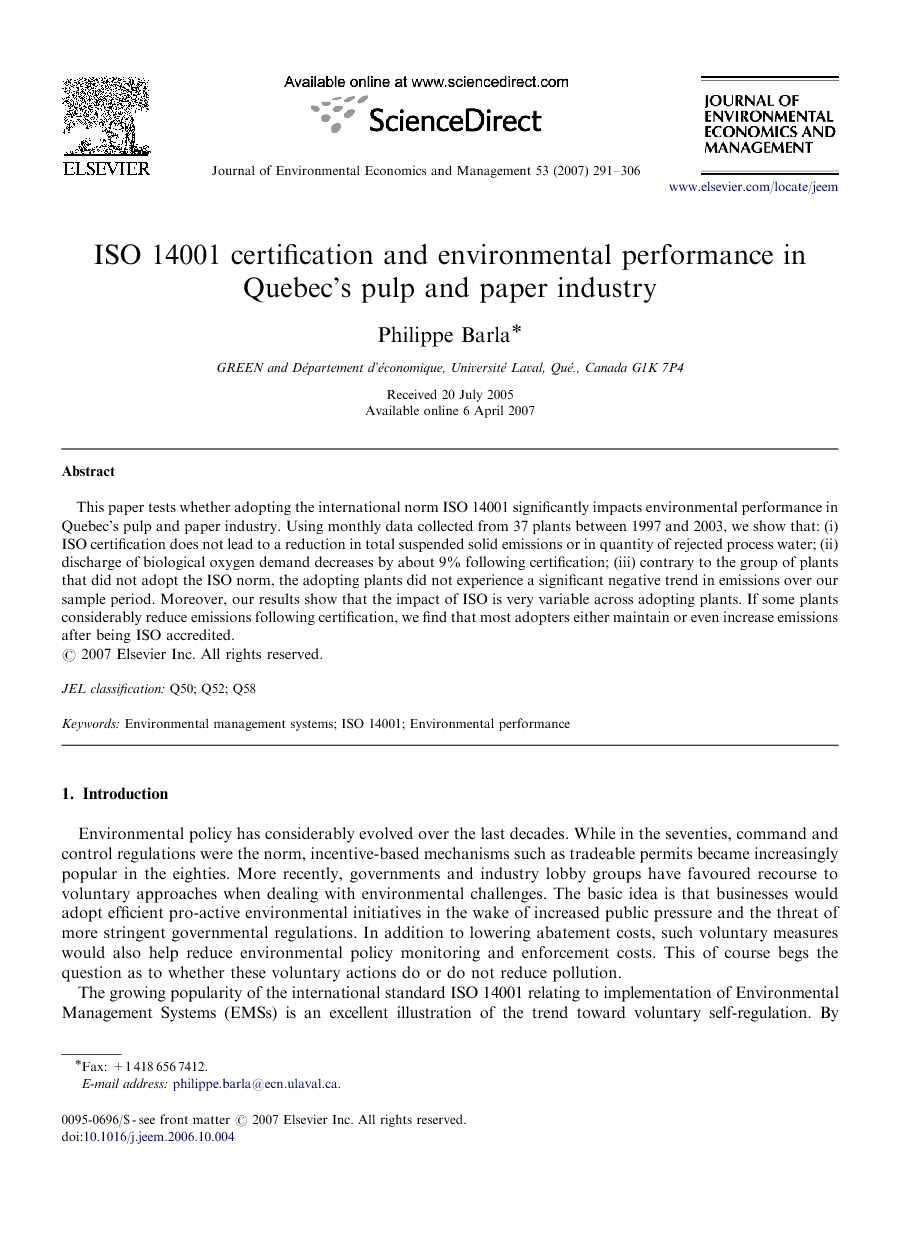 This paper tests whether adopting the international norm ISO 14001 significantly impacts environmental performance in Quebec's pulp and paper industry. Using monthly data collected from 37 plants between 1997 and 2003, we show that: (i) ISO certification does not lead to a reduction in total suspended solid emissions or in quantity of rejected process water; (ii) discharge of biological oxygen demand decreases by about 9% following certification; (iii) contrary to the group of plants that did not adopt the ISO norm, the adopting plants did not experience a significant negative trend in emissions over our sample period. Moreover, our results show that the impact of ISO is very variable across adopting plants. If some plants considerably reduce emissions following certification, we find that most adopters either maintain or even increase emissions after being ISO accredited.

Environmental policy has considerably evolved over the last decades. While in the seventies, command and control regulations were the norm, incentive-based mechanisms such as tradeable permits became increasingly popular in the eighties. More recently, governments and industry lobby groups have favoured recourse to voluntary approaches when dealing with environmental challenges. The basic idea is that businesses would adopt efficient pro-active environmental initiatives in the wake of increased public pressure and the threat of more stringent governmental regulations. In addition to lowering abatement costs, such voluntary measures would also help reduce environmental policy monitoring and enforcement costs. This of course begs the question as to whether these voluntary actions do or do not reduce pollution. The growing popularity of the international standard ISO 14001 relating to implementation of Environmental Management Systems (EMSs) is an excellent illustration of the trend toward voluntary self-regulation. By December 2003, over 66,000 organizations worldwide had voluntarily established an ISO 14001 certified EMS. An EMS may be viewed as a set of management rules and procedures designed at reducing the environmental impacts of an organization. It involves, among other things, reviewing and documenting an organization's activities that negatively impact the environment, developing an environmental policy statement and a plan to achieve environmental objectives. However, these targets are, for the most part, decided internally by the organization. In other words, the ISO norm does not prescribe any specific objective except to respect existing regulations. Therefore, opponents have characterized ISO 14001 as a marketing device for improving corporate image without significantly impacting environmental performance [21]. In this paper, we test the impact of ISO 14001 on the effluents of 37 Quebec pulp and paper plants using monthly data over the period 1997–2003. We compare the environmental performances of ISO 14001 plants before and after certification and the performance of plants that are not (yet) certified. Our results suggest that while the ISO 14001 certification does not significantly impact total suspended solids (TSS) or total quantity of water rejected, it does reduce plant discharges of biological oxygen demand (BOD) by about 9%. We also find that plants that did not adopt the ISO norm during our sample period experienced an overall significant trend in emissions reduction (TSS and BOD) contrary to plants that adopted the norm. Furthermore, our results show that the impact of ISO is very variable across adopting plants. If some adopters considerably reduce emissions following certification, we find that most adopters either maintain or even increase emissions after being accredited. From a methodological point of view, these results stress the importance of properly controlling for plants heterogeneity when testing for the impact of voluntary initiatives. The empirical literature on corporate environmentalism is still quite limited and has primarily focused on the adoption determinants of self regulations (see for example [11], [12] and [18]). Nevertheless, a few recent works have examined the impact of voluntary initiatives, and particularly EMS, on environmental performance. Using a sample of about 150 US companies, Anton et al. [2] find that the level of comprehensiveness of an EMS has a significantly negative impact on toxic release emission rates. The reduction is particularly important in the case of firms with a history of high pollution intensity. A survey of 236 Mexican manufacturing plants conducted by Dasgupta et al. [5] shows that plants with a high degree of conformity to ISO guidelines are more likely to report (self-assessed) compliance with environmental regulations. However, as both studies used data preceding official publication of the norm, they do not directly test the impact of ISO certification. Therefore, our main contribution is specifically to test whether the ISO 14001 certification of an EMS significantly impacts environmental performance. Our analysis also avoids comparing very heterogeneous organizations by focusing on plants belonging to the same industry. Moreover, the panel structure of our data set allows us to control for unobservable plant-specific factors that may be correlated with the adoption decision, thereby reducing missing variable biases. This paper also draws from the literature studying the determinants of environmental performance. Several studies have examined the impacts of monitoring and enforcement activities (inspections, legal proceedings, fines) on environmental performance [6], [9], [14], [15] and [17]. More recently, Foulon et al. [8] compare these traditional enforcement strategies with those based on information disclosure (i.e. publication of “worst” polluters’ lists). Of particular relevance to our analysis is a study by Laplante and Rilstone [15] showing that inspections significantly reduce emissions in Quebec's pulp and paper industry. Section 2 provides a general background on the ISO standard describing how it may affect environmental performance and a brief depiction of Quebec's pulp and paper industry. Section 3 contains a description of the data and some preliminary evidence. The empirical model and results are presented in 4 and 5, respectively. We conclude in Section 6.

Despite growing interest in voluntary measures to address environmental externalities, thus far, there is scarce empirical evidence of the effectiveness of these initiatives. One good example is the international norm ISO 14001 that is becoming increasingly popular but whose environmental impact has not yet been extensively evaluated. In this paper, we address this issue by testing whether ISO certification of an EMS significantly impacts two traditional indicators (BOD and TSS) in Quebec's pulp and paper industry. We also test its impact on the total quantity of water rejected. Using a panel data set covering 37 plants over the 1997–2003 period, we find rather disappointing evidence on the effectiveness of ISO 14001. While BOD emissions slightly decline following certification, we do not find any significant change in TSS emissions or in the quantity of rejected process water. We also find that over time, non-adopting plants experienced more significant emission reductions than plants that eventually adopt ISO. Moreover, the impacts of ISO are very variable across plants. If a few plants considerably reduce emissions following certification, a majority of adopters either maintain or even increase emissions after being accredited. Obviously, future research should try identifying conditions favouring successful implementation of ISO. Other limits of our analysis could also temper our conclusion that ISO is often ineffective. As previously mentioned, ISO certification may have more significant impacts on pollutants that are newly or not yet regulated (e.g. green house gases). Also, bear in mind that our analysis specifically tests the impact of ISO certification of an EMS rather than its implementation per se. It is therefore possible that implementing an EMS reduces emissions but that the ISO requirements do not improve its effectiveness. The ISO certification may also have countervailing effects reducing emissions through the implementation of an EMS but also helping to ease external pressures thereby progressively relaxing the plant's efforts for controlling pollution. In conclusion, further research is needed especially to identify factors that may explain why ISO succeeds in some organizations and fails in others.