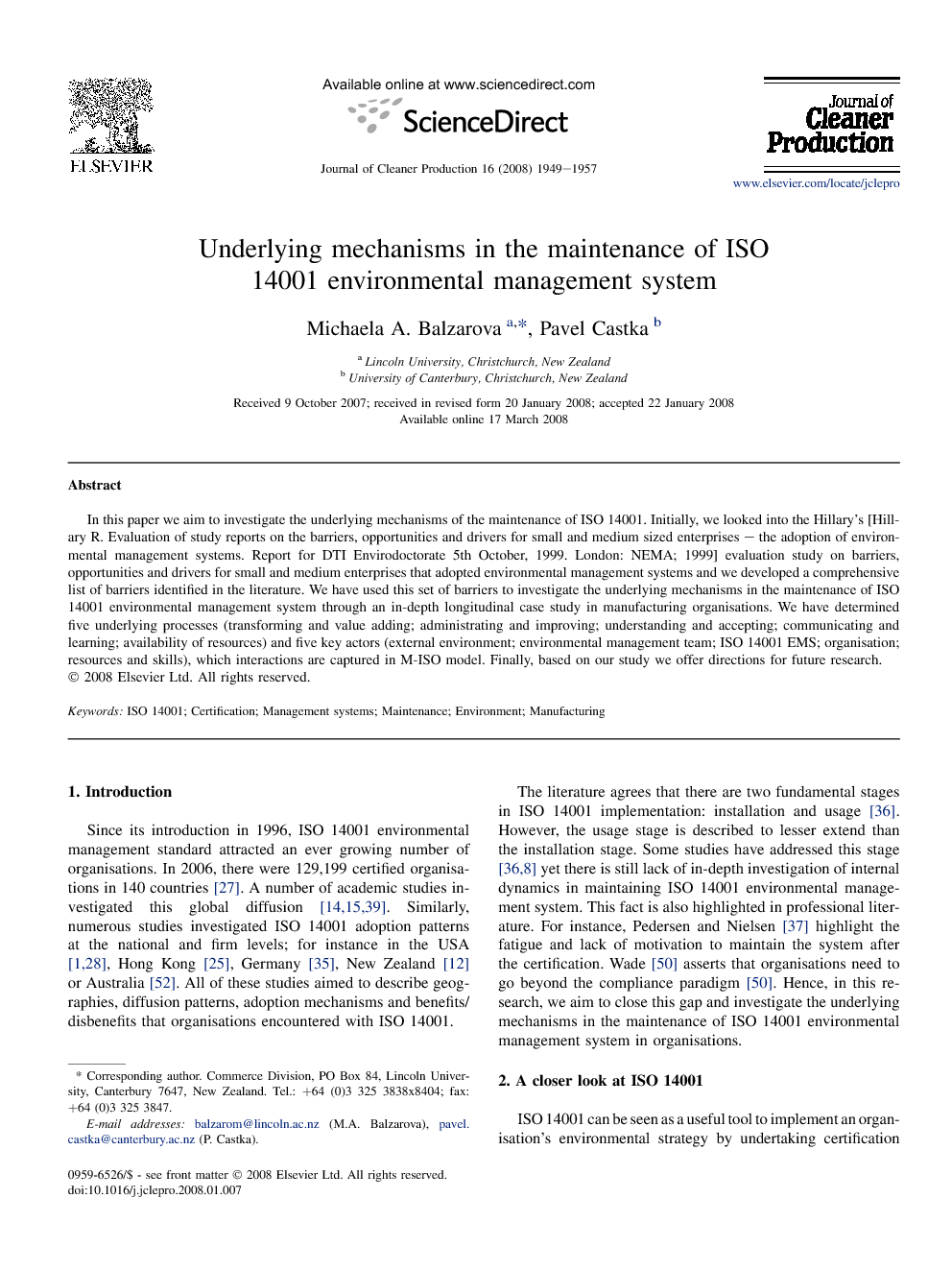 In this paper we aim to investigate the underlying mechanisms of the maintenance of ISO 14001. Initially, we looked into the Hillary's [Hillary R. Evaluation of study reports on the barriers, opportunities and drivers for small and medium sized enterprises – the adoption of environmental management systems. Report for DTI Envirodoctorate 5th October, 1999. London: NEMA; 1999] evaluation study on barriers, opportunities and drivers for small and medium enterprises that adopted environmental management systems and we developed a comprehensive list of barriers identified in the literature. We have used this set of barriers to investigate the underlying mechanisms in the maintenance of ISO 14001 environmental management system through an in-depth longitudinal case study in manufacturing organisations. We have determined five underlying processes (transforming and value adding; administrating and improving; understanding and accepting; communicating and learning; availability of resources) and five key actors (external environment; environmental management team; ISO 14001 EMS; organisation; resources and skills), which interactions are captured in M-ISO model. Finally, based on our study we offer directions for future research.

Since its introduction in 1996, ISO 14001 environmental management standard attracted an ever growing number of organisations. In 2006, there were 129,199 certified organisations in 140 countries [27]. A number of academic studies investigated this global diffusion [14], [15] and [39]. Similarly, numerous studies investigated ISO 14001 adoption patterns at the national and firm levels; for instance in the USA [1] and [28], Hong Kong [25], Germany [35], New Zealand [12] or Australia [52]. All of these studies aimed to describe geographies, diffusion patterns, adoption mechanisms and benefits/disbenefits that organisations encountered with ISO 14001. The literature agrees that there are two fundamental stages in ISO 14001 implementation: installation and usage [36]. However, the usage stage is described to lesser extend than the installation stage. Some studies have addressed this stage [36] and [8] yet there is still lack of in-depth investigation of internal dynamics in maintaining ISO 14001 environmental management system. This fact is also highlighted in professional literature. For instance, Pedersen and Nielsen [37] highlight the fatigue and lack of motivation to maintain the system after the certification. Wade [50] asserts that organisations need to go beyond the compliance paradigm [50]. Hence, in this research, we aim to close this gap and investigate the underlying mechanisms in the maintenance of ISO 14001 environmental management system in organisations.

As an international standard, ISO 14001 represents a global blueprint for establishing, managing and maintaining environmental management systems in organisations. Current global diffusion of ISO 14001 indeed suggests that many organisations bought into it even though for various motivations – such as seeking strategic positioning, improving their operations or their environmental image [38]. The critics of ISO 14001 (and also critics of ISO 9001) argue, however, that organisations are content with the minimal level of compliance and that the focus and effort in the future should be in encouraging organisations to move ‘beyond the compliance’ paradigm [50] and [53]. In this study, we wanted to contribute to this effort. We have undertaken an in-depth internal investigation of ISO 14001 in organisations – namely looking at how organisations maintain their ISO 14001 environmental management systems and describing the mechanism of this process. Consistent with previous studies (see Table 1), we found out many well-known barriers such as the lack of knowledge, people not following procedures, problem with identification and adoption of new legislation, etc. Indeed, most of the barriers identified in the literature (Table 1), were found (in some or other form) in our study. In this respect, our study is not unique. What is unique, however, is the revelation of underlying mechanisms in the maintenance of ISO 14001, which is captured in the M-ISO model (Fig. 2). Apart from the M-ISO model, our research has also highlighted several important issues. Firstly, the linkage between two stages described by Naveh and Marcus [36] – installation and usage – is fundamental. Our research reveals (and in fact confirms findings from previous studies) that to change the design and employees' buy-in into the ISO 14001 EMS in the usage stage is much more difficult than in the installation stage. An inappropriate design of EMS inevitably shifts organisational focus towards maintaining the certification rather than improving organisational processes and performance. Secondly, and related to the first point, alignment of organisational strategy and its operations is critical during the installation stage. In other words, if the ISO 14001 EMS in organisations does not support organisational sustainability and success, it becomes a burden and people neither buy into it nor organisations invest into the system. Thirdly, organisations need to maintain an optimistic and proactive approach even in situations of coercive nature – for instance when required to comply with new legislation. Organisations, which are able to ‘transform’ these new requirements into their system in a way that assists their operations (arrow A in Fig. 2), will enjoy much stronger internal buy-in than others. A conclusion from these three points is that organisations should put a maximum effort to design appropriately their ISO 14001 EMS. Whilst designing ISO 14001 EMSs, structural and infrastructural decision [22] and organisational culture [3] needs to be considered in order to create a system that truly supports the organisation. The results of this research and the recommendations for organisations must be, however, taken with care and with the knowledge of its limitation. This research is limited to two case study organisations, hence generalisation is analytical rather than statistical [51]. Moreover, the study has been designed as theory building and the model needs testing in different organisations. Therefore, the authors recommend that the future research should be carried out and focus at the following areas: ■ Investigate the M-ISO model (Fig. 2) on a sample of organisations from different sectors, settings and countries; ■ Assess the causality of the identified nodes of this research; ■ Develop a frameworks to assess EMS maturity within organisations; ■ Further scrutinize individual barriers to ISO 14001 maintenance (Table 1). The field of environmental management develops fast. New tools and approaches may indeed affect the ways in which organisations install and use international standards. For instance, ISO 14001 was revised in 2004 (our research dealt with organisations certified against the 1996 version). New standards were added to assist organisations to deal with specific areas of ISO 14001 (for instance ISO 14031 assist organisations specifically with environmental performance evaluation; ISO 14064 with quantification and reporting of greenhouse gas emissions and removals). We envisage though that the generic nature of M-ISO model would be applicable to these standards. We encourage, however, further research in this area.