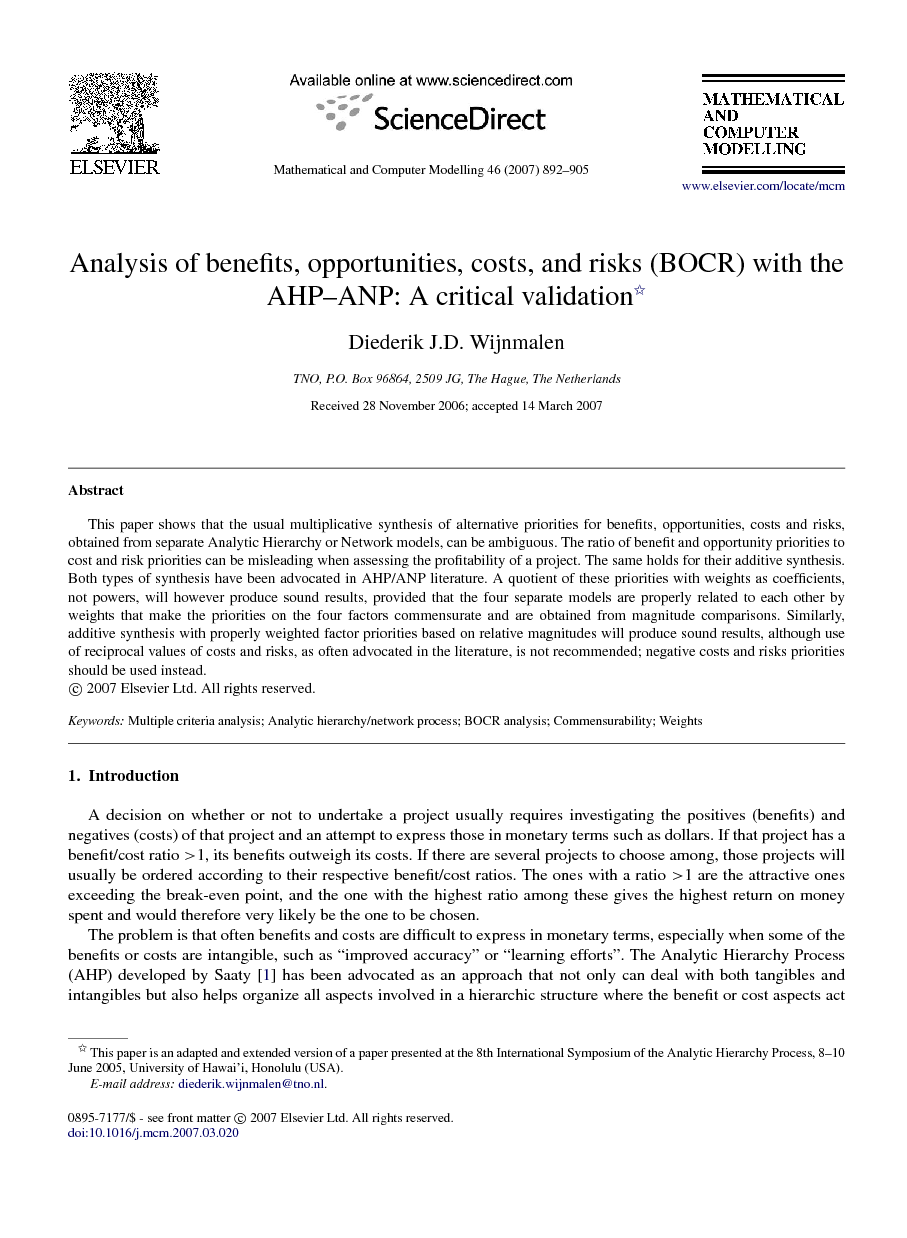 This paper shows that the usual multiplicative synthesis of alternative priorities for benefits, opportunities, costs and risks, obtained from separate Analytic Hierarchy or Network models, can be ambiguous. The ratio of benefit and opportunity priorities to cost and risk priorities can be misleading when assessing the profitability of a project. The same holds for their additive synthesis. Both types of synthesis have been advocated in AHP/ANP literature. A quotient of these priorities with weights as coefficients, not powers, will however produce sound results, provided that the four separate models are properly related to each other by weights that make the priorities on the four factors commensurate and are obtained from magnitude comparisons. Similarly, additive synthesis with properly weighted factor priorities based on relative magnitudes will produce sound results, although use of reciprocal values of costs and risks, as often advocated in the literature, is not recommended; negative costs and risks priorities should be used instead.

In this paper benefits–opportunities–costs–risks (BOCR) analysis using AHP/ANP methodology was addressed. The computation of the composite priorities for the alternatives on each of the four BOCR factors may be based on hierarchy (AHP) or network (ANP) models, but is not the subject of this paper. It is rather the final synthesis of these four types of composite priorities that was investigated, using a multiplicative expression or two variants of an additive expression as advocated in the AHP/ANP literature. In order to be able to draw conclusions as to the validity of these types of synthesis, monetary equivalents of priorities were used in several scenarios. In reality, these monetary values are not known; they were merely used to investigate whether or not synthesis of priorities reproduces monetary results, assuming perfect consistency. The analysis in this paper suggests that it is crucial to express priorities on benefits, opportunities, costs and risks in commensurate terms. Otherwise, the results are meaningless or even deceiving (by incorrectly suggesting profitability of alternatives) and contradictory (showing rank reversals with results from more or less equivalent synthesis expressions), leading to bad decisions. This paper argues that although any set of weights reflecting relative importance can express priorities on a common priority scale, it is only a weighting scheme based on relative B, O, C and R magnitudes that will not only create commensurate priorities but also serve the purpose of validation (close approximation or even exact representation of “true” values) and allow a sound profitability analysis, equivalent to monetary break-even analysis even when the BOCR factors are intangible. If the choice must be made from a given set of alternatives without reconsidering that set, then the most sensible thing to do perhaps is to choose the one that has the highest priority. Nevertheless, if that priority would also be a reliable indicator of profitability, one may thereby be prompted to indeed try to improve an alternative or search for a better one if the indication should be unfavourable. This paper also argues that in a return on investment ratio oriented analysis, a synthesis expression should be used that is a quotient of positives (B and O) to negatives (C and R) with the rescaling weights as coefficients, not powers. The revised synthesis expression comes in two variants: one where rescaled (and thus commensurate) benefit and opportunity priorities are added in the nominator (and the same with the rescaled cost and risk priorities in the denominator), and one where they are multiplied. Multiplication produces a new unit that has no intuitive interpretation whereas addition has the advantage of keeping the original unit in both the nominator and denominator and should be recommended for this reason. Using a priority synthesis expression where negatives appear as reciprocals is not recommended even if they are made commensurate by weights that take the magnitude of reciprocal values into account. Further, in a net value oriented analysis, an additive synthesis expression should be used where rescaled cost and risk priorities are subtracted from rescaled benefits and opportunities priorities. Finally, if additional weights based on personal values are to be used to take account of feelings of relative importance of the four factors, this paper suggests that they should be applied to the rescaled priorities. Similar questions such as the ones proposed by Wedley et al. [3] regarding BC analysis enable BOCR priorities to achieve the desirable attributes of regular BOCR analysis. The disadvantage, however, is the cognitive difficulty to compare aggregate (or average) BOCR factors. Potentially simpler techniques for achieving commensurability were proposed by Wedley et al. [4] using linking pin technology. Since the unit of a derived ratio scale is arbitrary, a proportional transformation of the scale can put the unit in any hierarchy node. Furthermore, the link between hierarchies does not have to be at their topmost node (Schoner et al. [15]) but across a common alternative or well-chosen specific sub-factors. Before linking, one merely has to identify a node that becomes the unit of measurement for each hierarchy. Other nodes are then expressed in terms of that unit. Comparing abstract totalities seems mentally more demanding than comparing single nodes. However, how this should be done when having networks for the BOCR factors rather than hierarchies remains open for further investigation. A very recent suggestion was put forward by Saaty [16] and seems to be along the lines of the ideas above. It is based on the comparison of the ratings of one alternative across the four factors, which seems one of the ways in which their relative magnitudes may be captured provided that the other alternatives are expressed in terms relative to the referent alternative.