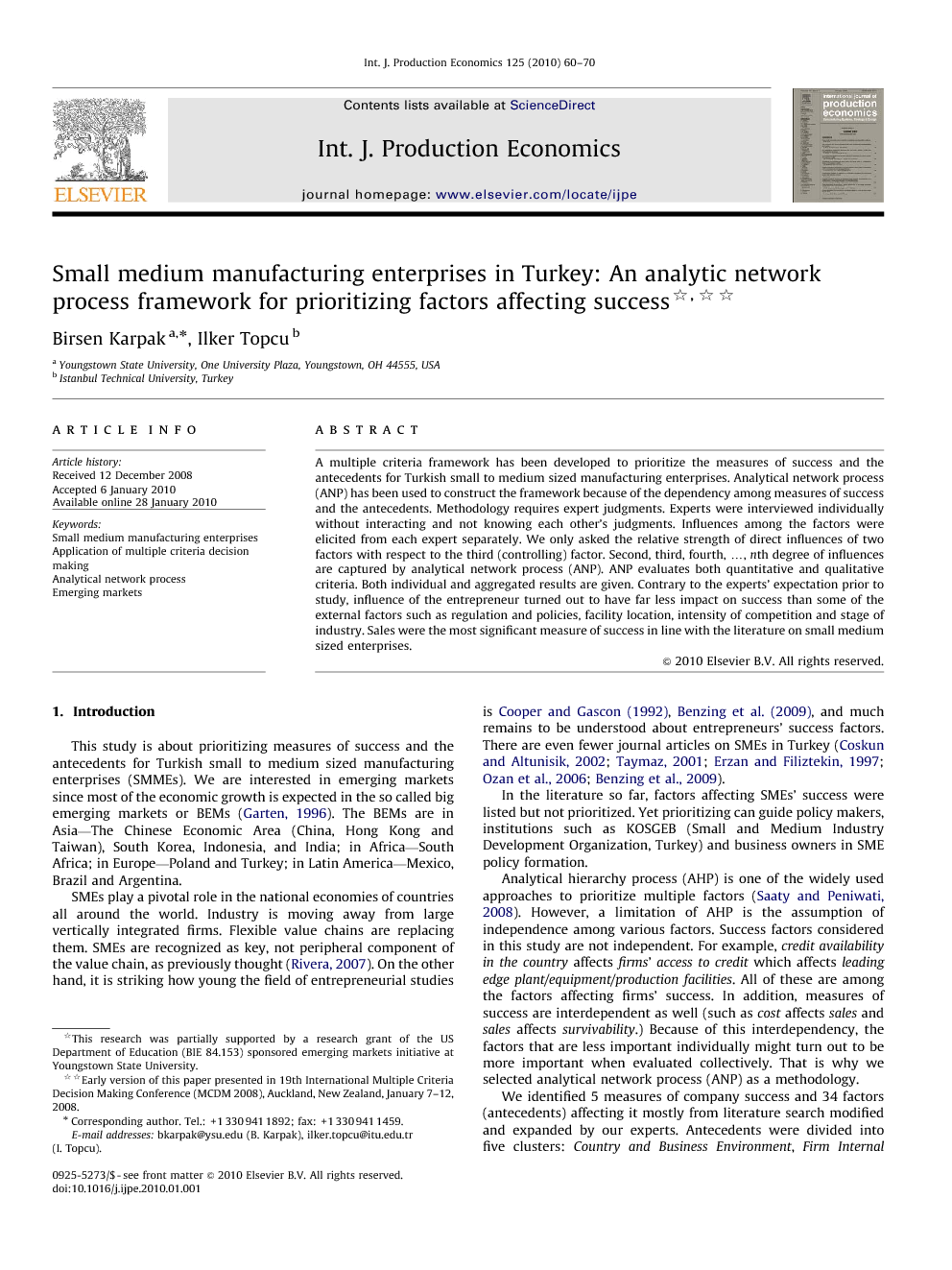 A multiple criteria framework has been developed to prioritize the measures of success and the antecedents for Turkish small to medium sized manufacturing enterprises. Analytical network process (ANP) has been used to construct the framework because of the dependency among measures of success and the antecedents. Methodology requires expert judgments. Experts were interviewed individually without interacting and not knowing each other's judgments. Influences among the factors were elicited from each expert separately. We only asked the relative strength of direct influences of two factors with respect to the third (controlling) factor. Second, third, fourth, …, nth degree of influences are captured by analytical network process (ANP). ANP evaluates both quantitative and qualitative criteria. Both individual and aggregated results are given. Contrary to the experts’ expectation prior to study, influence of the entrepreneur turned out to have far less impact on success than some of the external factors such as regulation and policies, facility location, intensity of competition and stage of industry. Sales were the most significant measure of success in line with the literature on small medium sized enterprises.

This study is about prioritizing measures of success and the antecedents for Turkish small to medium sized manufacturing enterprises (SMMEs). We are interested in emerging markets since most of the economic growth is expected in the so called big emerging markets or BEMs (Garten, 1996). The BEMs are in Asia—The Chinese Economic Area (China, Hong Kong and Taiwan), South Korea, Indonesia, and India; in Africa—South Africa; in Europe—Poland and Turkey; in Latin America—Mexico, Brazil and Argentina. SMEs play a pivotal role in the national economies of countries all around the world. Industry is moving away from large vertically integrated firms. Flexible value chains are replacing them. SMEs are recognized as key, not peripheral component of the value chain, as previously thought (Rivera, 2007). On the other hand, it is striking how young the field of entrepreneurial studies is Cooper and Gascon (1992), Benzing et al. (2009), and much remains to be understood about entrepreneurs’ success factors. There are even fewer journal articles on SMEs in Turkey (Coskun and Altunisik, 2002; Taymaz, 2001; Erzan and Filiztekin, 1997; Ozan et al., 2006; Benzing et al., 2009). In the literature so far, factors affecting SMEs’ success were listed but not prioritized. Yet prioritizing can guide policy makers, institutions such as KOSGEB (Small and Medium Industry Development Organization, Turkey) and business owners in SME policy formation. Analytical hierarchy process (AHP) is one of the widely used approaches to prioritize multiple factors (Saaty and Peniwati, 2008). However, a limitation of AHP is the assumption of independence among various factors. Success factors considered in this study are not independent. For example, credit availability in the country affects firms’ access to credit which affects leading edge plant/equipment/production facilities. All of these are among the factors affecting firms’ success. In addition, measures of success are interdependent as well (such as cost affects sales and sales affects survivability.) Because of this interdependency, the factors that are less important individually might turn out to be more important when evaluated collectively. That is why we selected analytical network process (ANP) as a methodology. We identified 5 measures of company success and 34 factors (antecedents) affecting it mostly from literature search modified and expanded by our experts. Antecedents were divided into five clusters: Country and Business Environment, Firm Internal Environment, Firm Expertise, Owner Related Factors and Institutional Support. The five measures of success were identified as sales (revenue), product cost superiority, product quality, cash flow (balance) and survivability (long term viability). We refer, from time to time, to both measures of success and the antecedents as “factors” since some measures of success affects some antecedents though in general measures of success are influenced by antecedents. We will first briefly introduce Turkey and SMEs in Turkey. Some of the factors used in this study are self-explanatory. In section three we will give a brief description of some factors we think need clarification. Section four explains the methodology used in this study including ANP and its innovative use for this particular study. Both individual and aggregated results obtained by eliciting the influence of each factor on others with respect to a controlling factor will be given in section five. Conclusion and future studies are given in section six.

The entrepreneur's personality, his/her managerial skill, and technical know-how are often cited as the most influential factor to the performance of an SME (Man et al., 2002). Our experts expected a similar result. Our study, however, illustrates that regulations and policies are the most influential factor in SME success. Though unexpected initially, this result is not surprising to the authors. Our experts agreed, as well. As we wrote in the introduction of this paper, if there are interdependencies among the factors, the factors that are less important individually might turn out to be more important when evaluated collectively. The human mind can only capture first (maybe second) degree of influences. We need a systematic approach such as ANP to capture second, third, and higher degree of influences. Reviewing regulation at all levels of government is vital in Turkey for manufacturing enterprises. By simplifying and—where possible—removing regulations, Turkey can become a more productive and better environment in which to live and do business. The European Commission is encouraging all Member States to follow its initiative to cut red tape. The Commission has developed and implements a range of policy measures specifically to assist SMEs in Europe. These policies are aimed at creating the conditions in which small firms can be created and can thrive. Rogoff et al. (2004) contend that some research uses continued viability or longevity—one dimension—as a surrogate for success. Based on the 51 articles they reviewed, Murphy et al. (1996) found out that success is usually measured with one dimension and recommend that studies include multiple dimensions of success. Man et al. (2002) concurs. This paper differs from earlier research as success has been measured with multiple dimensions. In addition, it considers quite a few factors influencing success, and the dependencies among them. To our knowledge, this is the first study prioritizing success factors for small medium manufacturing enterprises in Turkey. These studies can help policy makers, institutions supporting SME development and enterprises themselves in identifying factors for success. Turkey needs economic policies that can sustain strong growth in a climate of stability. The development of SMEs will create this stability and growth per capita income. On the other hand, stabilization and structural reform are prerequisites for the healthy development of SMEs. Stabilization requires substantial job creation and the bulk of this job creation will be in the SMEs. If Turkey is to achieve its goals of speeding up economic growth and creating more and better jobs, SMEs will play the biggest role. In particular, SMEs are responsible for much of the innovation which leads to new higher value products and services (even if ultimately larger firms may take on production and mass marketing of such innovations). This study is, to our knowledge, among the few articles using compatibility index and it is the first application of ANP into SME research. Cooper and Gascon (1992) identify analytical methods used in SME research as one of the major problems of this young area of study. They state that multivariate methods so common in other branches of management are only recently being used in increasing number of entrepreneurial research. This research shows that when there are dependencies among the variables related to success, ANP could be an alternative to statistical methodologies. We expect that this study might motivate some SME researchers to use ANP as an alternative methodology. ANP is a powerful methodology but you need to identify experts from whom the judgments are to be extracted. ANP is not very complex as a methodology; eliciting judgments from experts, however, could be quite time consuming. We have been very careful in designing the framework for obtaining expert judgment. We only asked the relative strength of direct influences of two factors with respect to the third (controlling) factor; second, third, fourth…degrees of influences are captured by ANP. ANP evaluates both quantitative and qualitative criteria. This study does not make a distinction between companies at different life cycle stages. It is about well-established SMEs. Extension of the model for companies at different life cycle stages (inception, growth, maturity) is a prospective study. This framework can be extended for companies following different strategies i.e. cost leadership vs. differentiation or focused differentiation. Since the problems facing entrepreneurs in emerging markets are often quite similar (Benzing et al., 2009) the same framework can be applied to SMEs in other emerging markets with some modifications. There may not be institutional support which is unique to Turkish small medium manufacturing enterprises. Links among the factors might be different in different cultures. Degree of influence of two factors with respect to a controlling factor may differ from country to country. Comparative studies in different emerging markets and comparisons with priorities developed by statistical methods would be interesting. For example, a similar framework can be implemented in the most promising emerging markets of Brazil, Russia, India, China (BRIC)—or Turkey, Russia, India, China (TRIC), according to other sources—to find out how similar or different SME success factors are for these emerging markets. It will be very interesting to compare our results with the findings of statistical survey results.