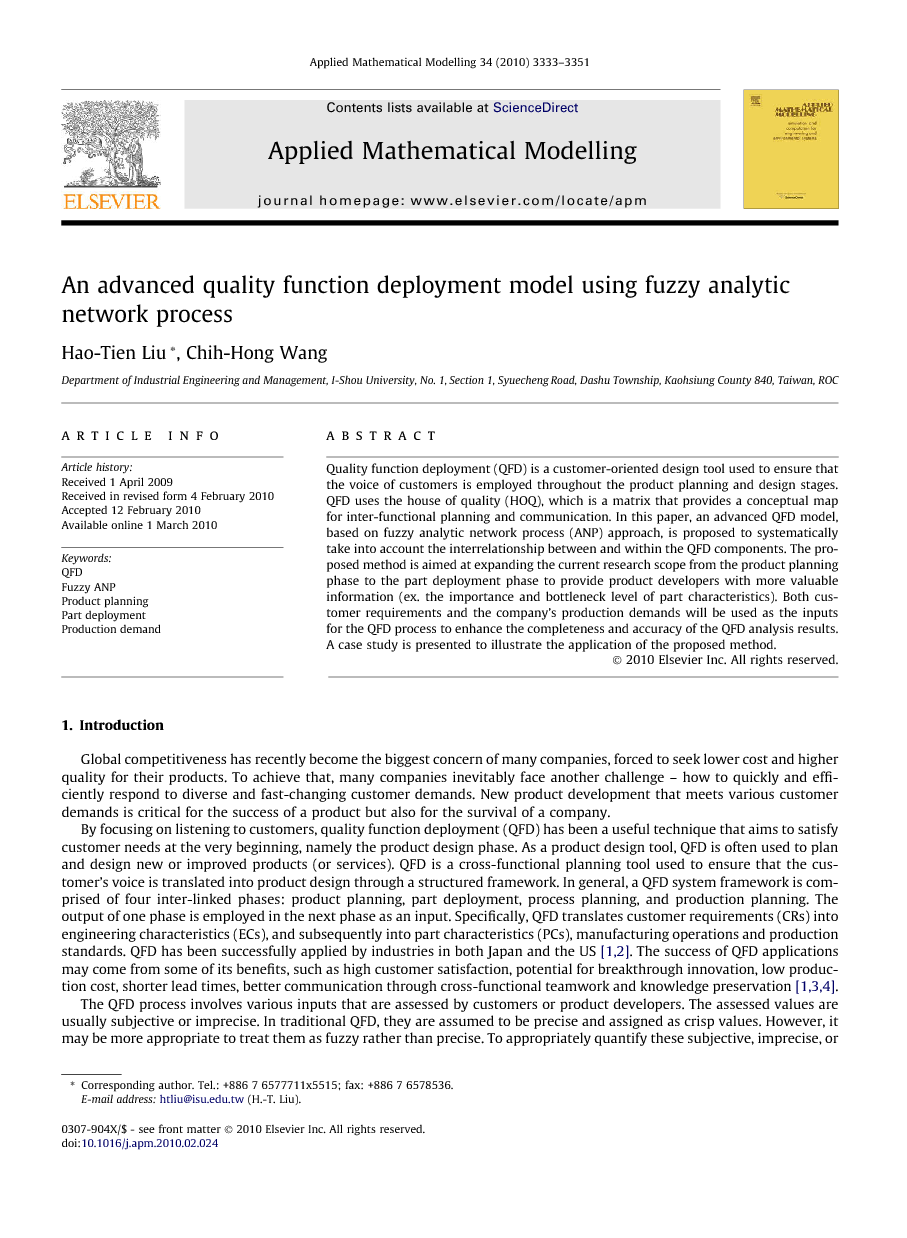 Quality function deployment (QFD) is a customer-oriented design tool used to ensure that the voice of customers is employed throughout the product planning and design stages. QFD uses the house of quality (HOQ), which is a matrix that provides a conceptual map for inter-functional planning and communication. In this paper, an advanced QFD model, based on fuzzy analytic network process (ANP) approach, is proposed to systematically take into account the interrelationship between and within the QFD components. The proposed method is aimed at expanding the current research scope from the product planning phase to the part deployment phase to provide product developers with more valuable information (ex. the importance and bottleneck level of part characteristics). Both customer requirements and the company’s production demands will be used as the inputs for the QFD process to enhance the completeness and accuracy of the QFD analysis results. A case study is presented to illustrate the application of the proposed method.

This study presented an advanced quality function deployment (A-QFD) approach using the fuzzy ANP model. The A-QFD model expanded the previous research scope from product planning to part deployment. The A-QFD approach can provide product developers with a lot of valuable information in the product design and development stages. The proposed method is equipped with the following advantages or strengths. (1) The fuzzy ANP approach provides a generic framework to well illustrate the interrelationship between and within the components of QFD. (2) The customer requirements as well as company’s production demands are considered in the product planning phase. Thus, the acquired final importance of ECs will be more comprehensive and precise. (3) The pairwise comparison method used in A-QFD yields fuzzy numbers rather than crisp values obtained from previous fuzzy ANP models. Moreover, the A-QFD method employs the consistency test to ensure that the pairwise comparison matrix is reasonable and acceptable. (4) The proposed method takes the competitive analysis into consideration so that product developers can clearly identify the strengths, weaknesses, intended market positions, and sales points of the product to be developed. (5) In the part deployment phase, the bottleneck level of PCs is also derived in addition to the importance of PCs. It may help product developers identify the possible bottlenecks of PCs in the product development stage. (6) A fuzzy k-means clustering method is proposed to classify the obtained information so that product developers can handle different importance (or bottleneck) groups with various priorities. (7) More importantly, the A-QFD method can provide product developers with abundant information, such as the importance ranking and importance groups of CRs, ECs, and PCs, the bottleneck ranking and bottleneck groups of PCs, etc. The acquired information can help product developers better understand product development problems that they are facing. The application of the A-QFD method is not limited to product development. This method can be easily modified and applied to other fields such as service quality improvement, manufacturing system design, system reliability design, engineering malfunction detection, business process planning, etc. Nevertheless, despite its benefits or potential applications, three issues need to be further addressed: (1) The A-QFD method uses triangular fuzzy numbers (TFNs) to represent linguistic assessments. However, TFN may not be applicable to all industrial applications. Therefore, determining the appropriate fuzzy numbers is necessary for certain applications. (2) A further exploration of the remaining phases of QFD, i.e., process planning and production planning, would be beneficial for subsequent product development. The information obtained from these two phases can help product developers identify critical process parameters, important production standards, vital work instructions, etc. (3) Because the proposed method involves a large amount of numerical computation, a user-friendly and intelligent decision support system might have to be developed to save time and effort in the analysis process.