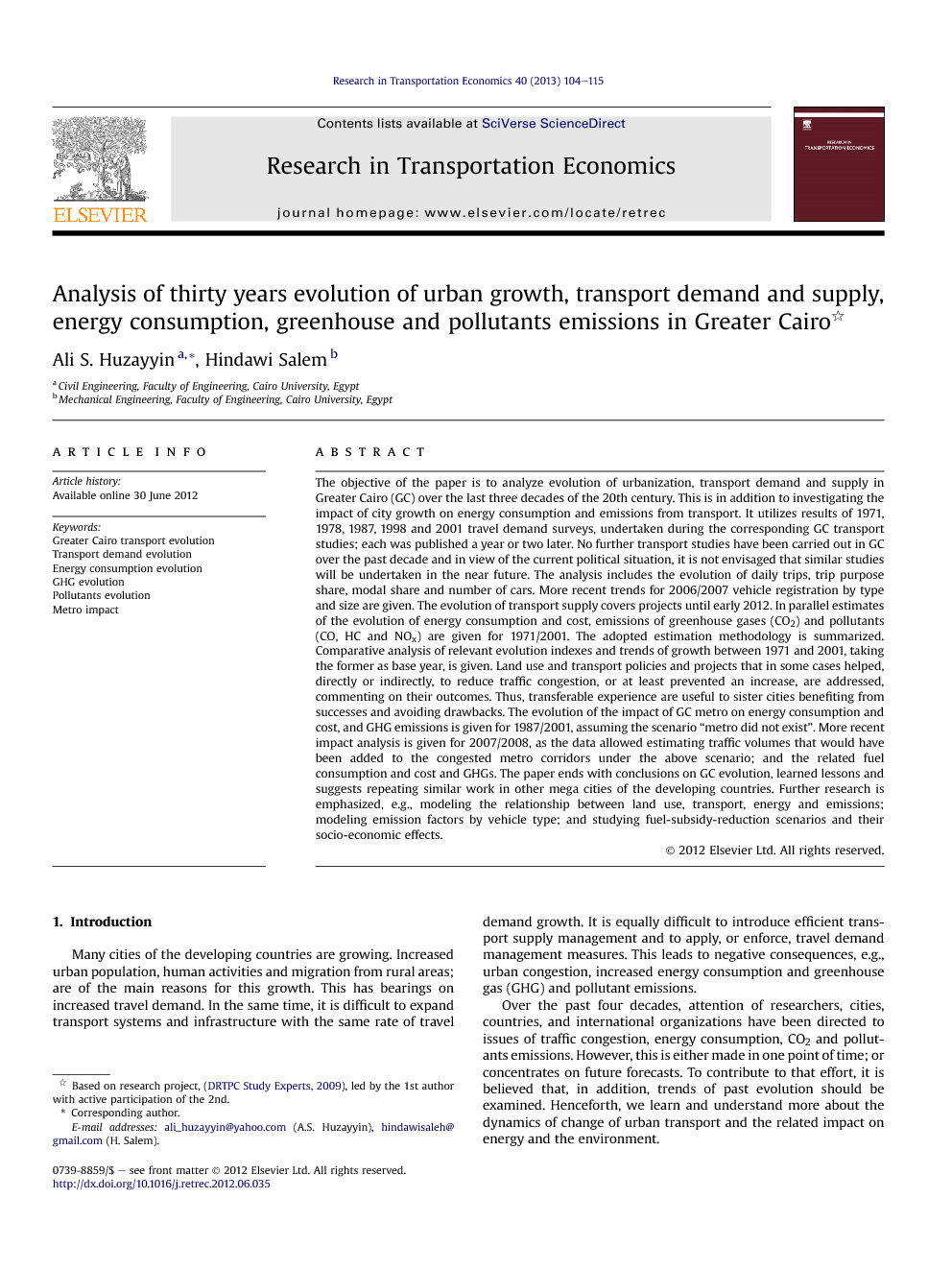 The objective of the paper is to analyze evolution of urbanization, transport demand and supply in Greater Cairo (GC) over the last three decades of the 20th century. This is in addition to investigating the impact of city growth on energy consumption and emissions from transport. It utilizes results of 1971, 1978, 1987, 1998 and 2001 travel demand surveys, undertaken during the corresponding GC transport studies; each was published a year or two later. No further transport studies have been carried out in GC over the past decade and in view of the current political situation, it is not envisaged that similar studies will be undertaken in the near future. The analysis includes the evolution of daily trips, trip purpose share, modal share and number of cars. More recent trends for 2006/2007 vehicle registration by type and size are given. The evolution of transport supply covers projects until early 2012. In parallel estimates of the evolution of energy consumption and cost, emissions of greenhouse gases (CO2) and pollutants (CO, HC and NOx) are given for 1971/2001. The adopted estimation methodology is summarized. Comparative analysis of relevant evolution indexes and trends of growth between 1971 and 2001, taking the former as base year, is given. Land use and transport policies and projects that in some cases helped, directly or indirectly, to reduce traffic congestion, or at least prevented an increase, are addressed, commenting on their outcomes. Thus, transferable experience are useful to sister cities benefiting from successes and avoiding drawbacks. The evolution of the impact of GC metro on energy consumption and cost, and GHG emissions is given for 1987/2001, assuming the scenario “metro did not exist”. More recent impact analysis is given for 2007/2008, as the data allowed estimating traffic volumes that would have been added to the congested metro corridors under the above scenario; and the related fuel consumption and cost and GHGs. The paper ends with conclusions on GC evolution, learned lessons and suggests repeating similar work in other mega cities of the developing countries. Further research is emphasized, e.g., modeling the relationship between land use, transport, energy and emissions; modeling emission factors by vehicle type; and studying fuel-subsidy-reduction scenarios and their socio-economic effects.

Many cities of the developing countries are growing. Increased urban population, human activities and migration from rural areas; are of the main reasons for this growth. This has bearings on increased travel demand. In the same time, it is difficult to expand transport systems and infrastructure with the same rate of travel demand growth. It is equally difficult to introduce efficient transport supply management and to apply, or enforce, travel demand management measures. This leads to negative consequences, e.g., urban congestion, increased energy consumption and greenhouse gas (GHG) and pollutant emissions. Over the past four decades, attention of researchers, cities, countries, and international organizations have been directed to issues of traffic congestion, energy consumption, CO2 and pollutants emissions. However, this is either made in one point of time; or concentrates on future forecasts. To contribute to that effort, it is believed that, in addition, trends of past evolution should be examined. Henceforth, we learn and understand more about the dynamics of change of urban transport and the related impact on energy and the environment. It is also clear that transport demand and supply are always affected, and reflected, by the extent of urbanization and activity development; by type, density and location. In the same time transport, mainly road-based modes, bears on energy consumption, increased GHG and air pollution. In other words, “transportation” lies in the middle, between “urbanization” from one hand and “energy/environment” from the other. It takes the burden of urban area expansion as a generator/driver of increased transport demand/supply; and their evolution by size and location. In the same time, transport causes direct impact on energy consumption and emissions of GHG and pollution; and also their evolution; by size and/or location. Transport, in addition, as mentioned above, has strong mutual interaction with land use activity; each is directly affecting the other.

The paper reveals the high trends of growth of the number of vehicles and daily trips over the years. In the same time it shows that transport supply expansion and urban area development could not grow with the same pace to cope with the increased travel demand. It can be concluded also that over the years the majority of trips continued to be made on public transport, and on foot. Meanwhile, the minority using the private car continued to congest the streets causing energy/environment adverse effects. The evolution indexes of fuel consumption and CO2 equivalent emissions are nearly equal. Those are closely linked with the increase in private cars. It is also found that the effect of increased vehicular traffic on GHG is more than that on local pollution. This is due to the less polluting vehicles in the past 20 years and the increased use of the metro that runs on heavily congested corridors. In the same time the evolution of NOx and CO are higher than that of the number of all trips. The paper reveals that successful decentralization of land use activities needs time and patience from the local authorities to be fully implemented. It demonstrates, however, the policy of replacement of old taxies by new models as another transferable lesson where success is highly possible in short time; if applicable schemes are sensibly negotiated with all stakeholders. It is concluded also that irrespective of its construction cost, metro has huge traffic and energy/environment impacts. Between 1987 and 2001 had the GC metro was not constructed; the corresponding amount of fuel consumed in transport and related CO2 emissions were estimated to would have been increased by 2500% and 2622%, respectively. The cost of fuels consumed in transport in GC, in 2007 without the metro, is estimated to would have reached $64 million in local prices. The corresponding estimate in international prices is $153 million. Certainly this is a huge saving for a country that needs foreign currency to support the economy. Similarly, CO2 emissions are estimated to would have been rising by 129% in 2007 compared to 2001. In 2008 the average and maximum ‘additional’ vehicular traffic estimated to run on the already highly congested corridors of the metro, if it did not exit, are 168,000 vehicles and 216,000 vehicles, respectively. Had the available data allowed, the consequences would have been much exacerbated in 2012. Currently,