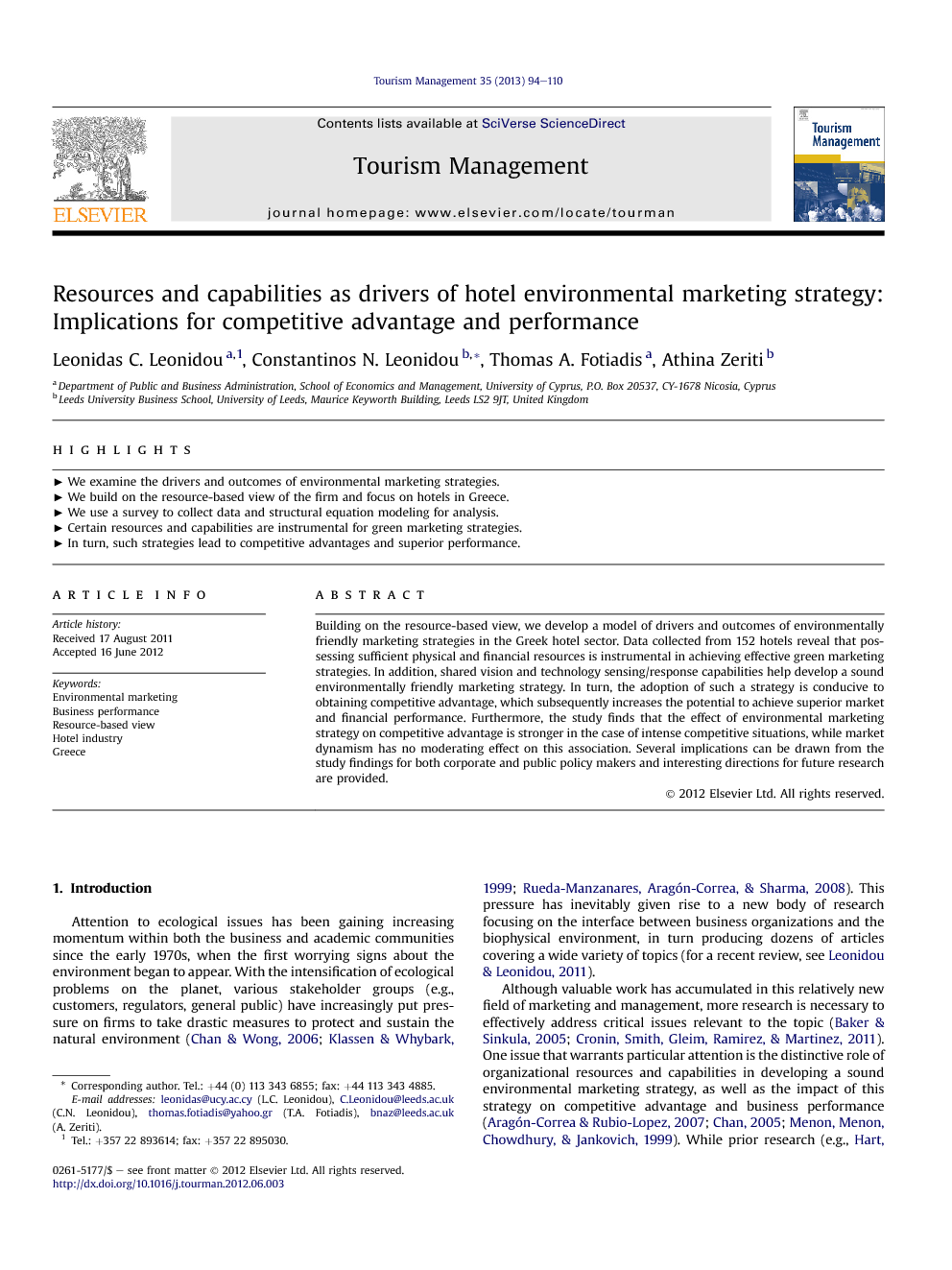 Building on the resource-based view, we develop a model of drivers and outcomes of environmentally friendly marketing strategies in the Greek hotel sector. Data collected from 152 hotels reveal that possessing sufficient physical and financial resources is instrumental in achieving effective green marketing strategies. In addition, shared vision and technology sensing/response capabilities help develop a sound environmentally friendly marketing strategy. In turn, the adoption of such a strategy is conducive to obtaining competitive advantage, which subsequently increases the potential to achieve superior market and financial performance. Furthermore, the study finds that the effect of environmental marketing strategy on competitive advantage is stronger in the case of intense competitive situations, while market dynamism has no moderating effect on this association. Several implications can be drawn from the study findings for both corporate and public policy makers and interesting directions for future research are provided.

Attention to ecological issues has been gaining increasing momentum within both the business and academic communities since the early 1970s, when the first worrying signs about the environment began to appear. With the intensification of ecological problems on the planet, various stakeholder groups (e.g., customers, regulators, general public) have increasingly put pressure on firms to take drastic measures to protect and sustain the natural environment (Chan & Wong, 2006; Klassen & Whybark, 1999; Rueda-Manzanares, Aragón-Correa, & Sharma, 2008). This pressure has inevitably given rise to a new body of research focusing on the interface between business organizations and the biophysical environment, in turn producing dozens of articles covering a wide variety of topics (for a recent review, see Leonidou & Leonidou, 2011). Although valuable work has accumulated in this relatively new field of marketing and management, more research is necessary to effectively address critical issues relevant to the topic (Baker & Sinkula, 2005; Cronin, Smith, Gleim, Ramirez, & Martinez, 2011). One issue that warrants particular attention is the distinctive role of organizational resources and capabilities in developing a sound environmental marketing strategy, as well as the impact of this strategy on competitive advantage and business performance (Aragón-Correa & Rubio-Lopez, 2007; Chan, 2005; Menon, Menon, Chowdhury, & Jankovich, 1999). While prior research (e.g., Hart, 1995) has considered firms' environmental practices as a resource and/or capability that enforces competitive advantage, little attention has been specifically paid to the role of the resources and capabilities responsible for shaping an eco-friendly marketing strategy and its performance outcomes.2 Because studies on environmental marketing/management have mainly focused on manufacturing firms, due to their greater exposure to ecological issues in the form of inputs and outputs, investigation needs to extend to green issues in the services sector, which has often been described as destroying the environment ‘silently’ (Álvarez-Gil, Burgos-Jiménez, & Céspedes-Lorente, 2001; Carmona-Moreno, Céspedes-Lorente, & De Burgos-Jiménez, 2004; Foster, Sampson, & Dunn, 2000). A driving force in this sector is tourism, which, with its unprecedented growth in recent decades, has been responsible for making excessive use of natural resources, consuming a great amount of energy, and damaging the biophysical environment (Rodriguez & Cruz, 2007). Reflecting this, the scope of the tourism–environment interface has experienced a serious shift, from emphasizing more traditional concerns about natural resource management and recreational opportunities to introducing more unorthodox forms of tourism, such as ecotourism and sustainable tourism (Knowles, Macmillan, Palmer, Grabowski, & Hashimoto, 1999). Inextricably linked to tourism is the hotel industry, in which environmental issues play a unique role for four major reasons.3 First, hotel operations usually comprise a set of smaller activities, each using limited resources and having only a minimal damaging effect on the environment; second, in most countries, environmental legislation regulating hotels is relatively rare because of their less visible impact on the environment, thus offering fertile ground for voluntary environmental management actions; third, customers are directly influenced by the services provided by hotels and therefore are actively exposed to their environmentally friendly practices; fourth, the natural environment forms part of the tourism product itself, determining in many ways the quality and satisfaction offered to tourists (Álvarez-Gil et al., 2001; Carmona-Moreno et al., 2004; Deng & Burnett, 2002; Font, 2002; González & León, 2001; Knowles et al., 1999). Although the uniqueness characterizing the relationship between hotels and the natural environment has received increasing attention in the field (Kasim, 2006), environmental marketing issues within the hotel industry have only been tangentially tackled (Hudson & Miller, 2005). However, the investigation of these issues is critical because (1) in recent years, tourist buying behavior has changed dramatically, as demonstrated by the growing involvement in environmental-caring activities, reliance on decisions regarding sustainable issues, and a willingness to pay higher prices for eco-friendly goods (Han, Hsu, Lee, & Sheu, 2011; Lee, Hsu, Han, & Kim, 2010); (2) the marketing function is at the forefront of the hotel's environmentally friendly activity, since it is the one that first identifies and subsequently satisfies the needs and wants of customers with regard to green issues (Kotler & Lee, 2008); and (3) the hotel's eco-marketing activities (e.g., products/services, prices, distribution, communications) are greatly responsible for enhancing business performance, as a result of their direct impact on end users (Leonidou & Leonidou, 2011). Our study aims to fill this void in the green hotel literature by proposing and testing an integrated model of the drivers and outcomes of environmental marketing strategies pursued by hotels. Specifically, we focus on (1) the effect of both organizational resources and capabilities on formulating an eco-friendly marketing strategy, (2) the link between this strategy and the achievement of competitive advantage, (3) the impact of an environmentally driven competitive advantage on both market performance and financial performance, (4) the effect of the firm's market performance on its financial performance, and (5) the moderating role of both competitive intensity and market dynamism on the link between environmentally friendly marketing strategy and competitive advantage. The remainder of this article proceeds as follows: in section 2, we review the pertinent literature on the environmentally responsible behavior of hotels. In section 3, we present the conceptual model of the study and provide its theoretical justification. In section 4, we formulate several research hypotheses among the key constructs of the study. The specific methodology adopted for carrying out our research is subsequently explained, followed by an analysis of the data and presentation of the findings with regard to each of the hypotheses tested. The final three sections derive the study's conclusions, offer managerial and public policy implications, and suggest future research directions.