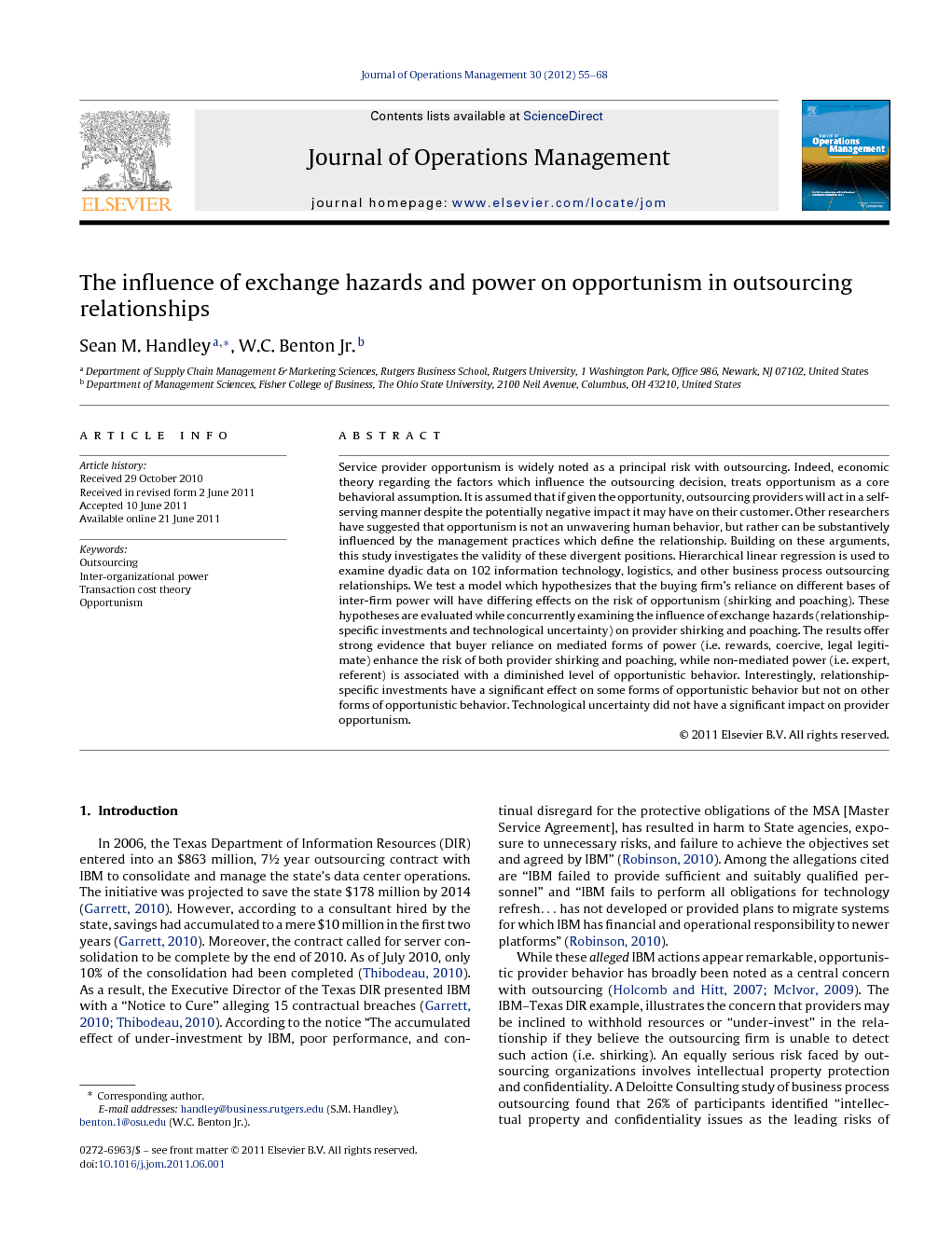 Service provider opportunism is widely noted as a principal risk with outsourcing. Indeed, economic theory regarding the factors which influence the outsourcing decision, treats opportunism as a core behavioral assumption. It is assumed that if given the opportunity, outsourcing providers will act in a self-serving manner despite the potentially negative impact it may have on their customer. Other researchers have suggested that opportunism is not an unwavering human behavior, but rather can be substantively influenced by the management practices which define the relationship. Building on these arguments, this study investigates the validity of these divergent positions. Hierarchical linear regression is used to examine dyadic data on 102 information technology, logistics, and other business process outsourcing relationships. We test a model which hypothesizes that the buying firm's reliance on different bases of inter-firm power will have differing effects on the risk of opportunism (shirking and poaching). These hypotheses are evaluated while concurrently examining the influence of exchange hazards (relationship-specific investments and technological uncertainty) on provider shirking and poaching. The results offer strong evidence that buyer reliance on mediated forms of power (i.e. rewards, coercive, legal legitimate) enhance the risk of both provider shirking and poaching, while non-mediated power (i.e. expert, referent) is associated with a diminished level of opportunistic behavior. Interestingly, relationship-specific investments have a significant effect on some forms of opportunistic behavior but not on other forms of opportunistic behavior. Technological uncertainty did not have a significant impact on provider opportunism.

In 2006, the Texas Department of Information Resources (DIR) entered into an $863 million, 7½ year outsourcing contract with IBM to consolidate and manage the state's data center operations. The initiative was projected to save the state $178 million by 2014 (Garrett, 2010). However, according to a consultant hired by the state, savings had accumulated to a mere $10 million in the first two years (Garrett, 2010). Moreover, the contract called for server consolidation to be complete by the end of 2010. As of July 2010, only 10% of the consolidation had been completed (Thibodeau, 2010). As a result, the Executive Director of the Texas DIR presented IBM with a “Notice to Cure” alleging 15 contractual breaches (Garrett, 2010 and Thibodeau, 2010). According to the notice “The accumulated effect of under-investment by IBM, poor performance, and continual disregard for the protective obligations of the MSA [Master Service Agreement], has resulted in harm to State agencies, exposure to unnecessary risks, and failure to achieve the objectives set and agreed by IBM” (Robinson, 2010). Among the allegations cited are “IBM failed to provide sufficient and suitably qualified personnel” and “IBM fails to perform all obligations for technology refresh… has not developed or provided plans to migrate systems for which IBM has financial and operational responsibility to newer platforms” (Robinson, 2010). While these alleged IBM actions appear remarkable, opportunistic provider behavior has broadly been noted as a central concern with outsourcing ( Holcomb and Hitt, 2007 and McIvor, 2009). The IBM–Texas DIR example, illustrates the concern that providers may be inclined to withhold resources or “under-invest” in the relationship if they believe the outsourcing firm is unable to detect such action (i.e. shirking). An equally serious risk faced by outsourcing organizations involves intellectual property protection and confidentiality. A Deloitte Consulting study of business process outsourcing found that 26% of participants identified “intellectual property and confidentiality issues as the leading risks of outsourcing” and 10% of respondents had explicitly experienced “confidentiality and intellectual property rights violations” (Landis et al., 2005, p. 10). For instance, one outsourcing firm reported that its vendor was caught selling proprietary software to other clients. These concerns for confidentiality and intellectual property protection highlight the second form of outsourcing provider opportunism that will be explicitly evaluated in this study, poaching.

As outsourcing continues to be a prevalent business practice and many firms are left disappointed with the results, it is imperative that a better understanding of the drivers of the total cost of outsourcing is developed. Shirking and poaching are specific forms of provider opportunism which can play a value-destroying role in outsourcing. The principal goal of this study was to examine the effects that exchange hazards and outsourcing firm power have on service provider shirking and poaching. Prior studies of inter-organizational opportunism have not concurrently examined the effects of exchange hazards and power in a common model. Pursuit of this research objective resulted in a substantive contribution to the outsourcing literature. Our statistical results offer evidence that outsourcing engagements characterized by higher levels of buyer relationship-specific investments and influence derived from mediated power bases face a higher risk of provider opportunism. Conversely, higher levels of provider relationship-specific investments and buyer reliance on non-mediated power bases are associated with a diminished risk of provider opportunism. These conditions not only reduce the risks of outsourcing, but also demand lower investments in monitoring and formal control mechanisms. This results in a more favorable risk–reward relationship for the outsourcing organization. Additionally, this study contributes reliable, validated scales for shirking and poaching. The analysis demonstrated the value of looking at specific forms of opportunism. Relationship-specific investments have a significant association with provider shirking, but not with poaching. Only by distinguishing between shirking and poaching were we able to flesh out these insights. The results of this study represent a valuable start to developing a deeper and more nuanced understanding of how relationship management practices, in addition to commonly noted exchange hazards, can exacerbate or attenuate the risk of opportunism with outsourcing. The contributions of this study can be extended by future research efforts. Exchange hazards and the basis of outsourcing firm power were found to have a meaningful impact on service provider opportunism. It is tenable that other environmental conditions and firm practices can instigate or mitigate provider opportunism. Subsequent studies could explore how contingency effects between outsourcing context and management practices can more fully explain provider opportunism. In addition, our measure of relationship-specific investments included two general items representing the two most germane forms of specificity identified in the literature: physical and human asset specificity (Grover and Malhotra, 2003 and Williamson, 1979). Future studies focusing on specific types of outsourcing may benefit from more detailed measures of specificity leading to additional insights. Moreover, consideration could be given as to what factors appear to influence buying firm opportunism. Finally, future efforts should be directed toward evaluating the drivers of other forms of opportunism and outsourcing transaction costs such as monitoring and coordinating. A better understanding of factors influencing these costs can result in improved, more realistic outsourcing business case development and more effective relationship management practices.