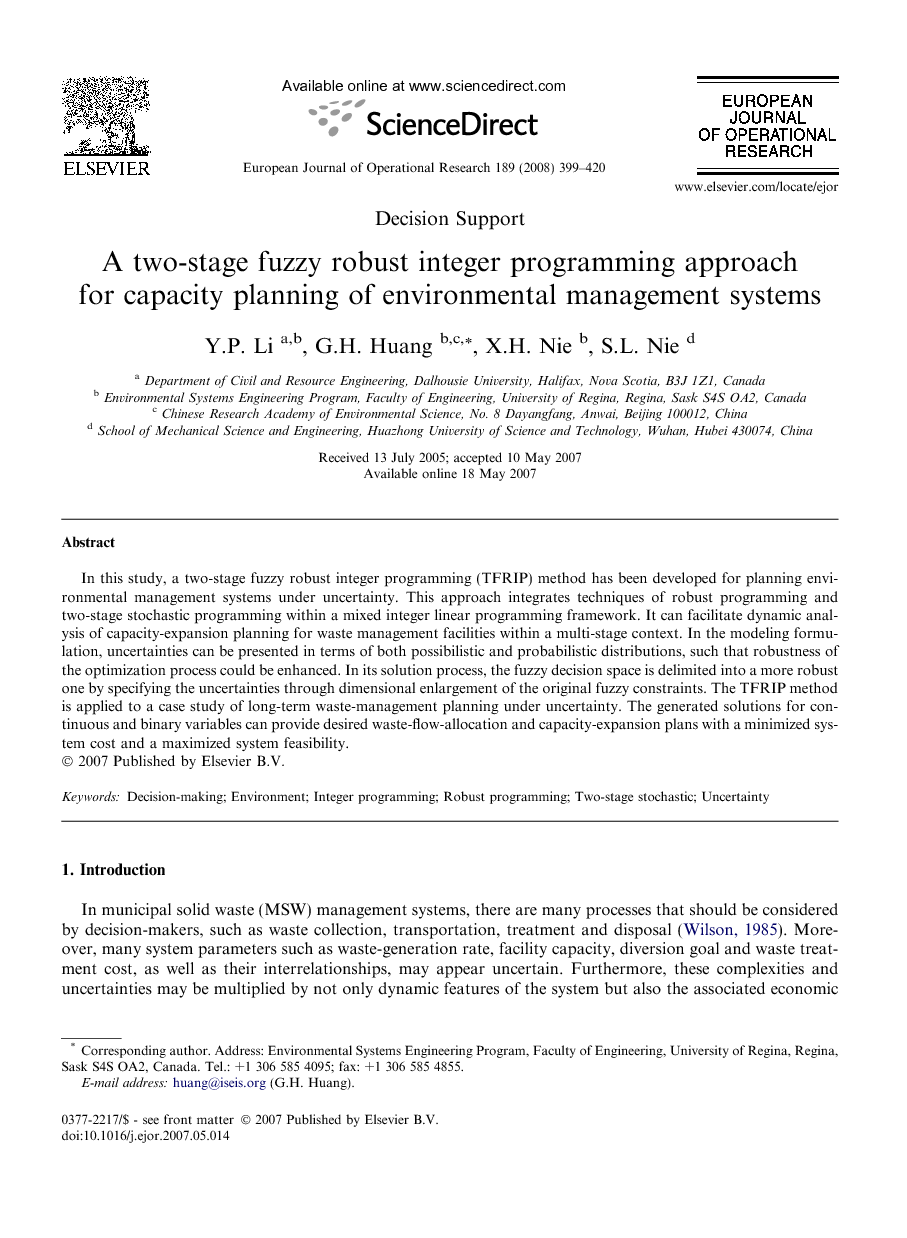 In this study, a two-stage fuzzy robust integer programming (TFRIP) method has been developed for planning environmental management systems under uncertainty. This approach integrates techniques of robust programming and two-stage stochastic programming within a mixed integer linear programming framework. It can facilitate dynamic analysis of capacity-expansion planning for waste management facilities within a multi-stage context. In the modeling formulation, uncertainties can be presented in terms of both possibilistic and probabilistic distributions, such that robustness of the optimization process could be enhanced. In its solution process, the fuzzy decision space is delimited into a more robust one by specifying the uncertainties through dimensional enlargement of the original fuzzy constraints. The TFRIP method is applied to a case study of long-term waste-management planning under uncertainty. The generated solutions for continuous and binary variables can provide desired waste-flow-allocation and capacity-expansion plans with a minimized system cost and a maximized system feasibility.

In municipal solid waste (MSW) management systems, there are many processes that should be considered by decision-makers, such as waste collection, transportation, treatment and disposal (Wilson, 1985). Moreover, many system parameters such as waste-generation rate, facility capacity, diversion goal and waste treatment cost, as well as their interrelationships, may appear uncertain. Furthermore, these complexities and uncertainties may be multiplied by not only dynamic features of the system but also the associated economic penalties if the promised targets are violated. Therefore, incorporation of various uncertainties and complexities within a general management framework is desired to evaluate the effects of various solid waste management policies. Most of the previous methods dealing with the complexities in waste management planning include fuzzy, stochastic and interval mathematical programming (abbreviated as FMP, SMP and IMP) (Kirca and Erkip, 1988, Baetz, 1990, Thomas et al., 1990, Chang and Wang, 1995, Chang and Wang, 1997, Leimbach, 1996, Chang and Lu, 1997, Chang et al., 1997, Huang et al., 1992, Huang et al., 1993, Huang et al., 1995, Huang et al., 2001, Huang et al., 2002, Chanas and Zielinski, 2000 and Maqsood and Huang, 2003). Among them, flexible programming (FP) is a typical FMP method, which could deal with decision problems under fuzzy goal and constraints. In the FP, the flexibility in the constraints and fuzziness in the objective, which were presented by fuzzy sets and denoted as “fuzzy constraints” and “fuzzy goal” respectively, were introduced into conventional mathematical programming models (Zimmermann, 1985). For example, Huang et al. (1995) proposed a grey fuzzy integer linear programming method for MSW management, which could tackle uncertainties presented in fuzzy and interval forms and could facilitate dynamic analyses of capacity-expansion decisions. Chang and Wang (1997) proposed a fuzzy goal programming model to evaluate the compatibility of waste recycling and incineration in the planning of MSW management systems. Chang et al. (1997) proposed a fuzzy interval multi-objective mixed integer programming model for the evaluation of strategies for solid waste management. However, the FP methods had difficulties in handling ambiguous coefficients in the objective function and constraints (Dubois and Prade, 1980). Consequently, the robust programming (RP), which was based on fuzzy set theory, was proposed for reflecting the ambiguous coefficients in the optimization model as well as the vague information of decision makers’ implicit knowledge (Watkins and Mckinney, 1995, Rapoport, 1995, Luhandjula and Gupta, 1996, Vassiadou-Zeniou and Zenios, 1996, Kunjur and Krishnamurty, 1997, Ben-Tal and Nemirovski, 1998, Ben-Tal and Nemirovski, 1999, Ben-Tal and Nemirovski, 2002, Dupacova, 1998, El Ghaoui and Seigneuret, 1998, El Ghaoui et al., 1998, Inuiguchi and Sakawa, 1998, Dubois and Prade, 1999a, Dubois and Prade, 1999b, Dubois and Prade, 1999c, Ben-Tal et al., 2000 and Liu et al., 2003). The RP improves upon the FP by allowing all fuzzy parameters in the constraints to be represented by possibilistic distributions. It could effectively handle uncertainties in both left- and right-hand side coefficients (in the constraints) as represented by possibilistic distributions. Moreover, the RP delimits an uncertain decision space by specifying uncertainties through dimensional enlargement of the original fuzzy constraints, and thus enhances the robustness of the optimization process. However, the main limitations of this method remain in its difficulties in tackling uncertainties expressed as probabilistic distributions in a non-fuzzy decision space and in providing a linkage between the pre-regulated policies and the associated economic implications. Two-stage stochastic programming (TSP) is effective for handling optimization problems where an analysis of policy scenarios is desired while the model’s right-hand side uncertainties are expressed as probability distributions. The fundamental idea behind the TSP is the concept of recourse, which defines the ability to take corrective actions after a random event has occurred. In TSP, a decision is firstly undertaken before values of random variables are known and, then, after the random events have occurred and their values are known, a second-stage decision is made in order to minimize “penalties” that may appear due to any infeasibility (Birge and Louveaux, 1988 and Birge and Louveaux, 1997). The TSP methods were widely explored over the past decades (Birge and Louveaux, 1988, Birge and Louveaux, 1997, Pereira and Pinto, 1991, Ruszczynski, 1993, Schultz et al., 1996, Ruszczynski and Swietanowski, 1997, Huang and Loucks, 2000, Seifi and Hipel, 2001 and Ahmed et al., 2004). However, few previous studies were reported on the applications of the TSP techniques to solid-waste management. Maqsood and Huang (2003) explored a two-stage interval-stochastic programming (TISP) method for the planning of solid waste management. The TISP could deal with uncertainties expressed as probability distributions and/or discrete intervals. However, this method had difficulties when (i) the coefficients in the model’s right-hand sides are highly uncertain, (ii) the constraints’ left- and right-hand sides are presented as fuzzy subsets, and (iii) dynamic planning needs to be made in terms of capacity-expansion decisions in different time stages. In fact, in many real-world problems, results produced by optimization techniques can be rendered highly questionable if the modeling inputs cannot be expressed with precision (Yeomans and Huang, 2003). Besides, during the past decade, conflicts between increased waste generation and decreased waste treatment/disposal capacity were intensified. Consequently, expansion of waste treatment/disposal capacity has become a crucial issue in planning MSW management systems, where a related optimization analysis will typically require the use of integer variables to indicate whether a particular facility development or expansion option needs to be undertaken. Mixed integer linear programming (MILP) is a useful tool for formulating such capacity planning problem (Huang et al., 1995). Therefore, it is desired that an integrated optimization method for dealing with both the uncertainties and the capacity-expansion issue be developed. The objective of this study is to develop a two-stage fuzzy robust integer programming (TFRIP) method and apply it to the planning of MSW management systems. This approach will integrate techniques of robust programming and two-stage stochastic programming within a mixed integer linear programming framework, to deal with uncertainties presented in terms of fuzzy sets and probability distributions. Moreover, it can also facilitate dynamic analyses of capacity-expansion planning for waste management facilities within a multi-stage context. In an attempted application to MSW management, the TFRIP method will be used for analyzing various policy scenarios that are associated with different levels of economic penalties when the promised policy targets are violated.

In this study, a two-stage fuzzy robust integer programming (TFRIP) method has been developed for planning environmental management systems under uncertainty. This method is based on an incorporation of the existing robust programming and two-stage stochastic programming techniques within a mixed integer linear programming framework. It can facilitate capacity-expansion planning for waste management facilities within a multi-period and multi-option context. In the modeling formulation, uncertainties can be presented in terms of both possibilistic and probabilistic distributions, such that robustness of the optimization process could be enhanced. Moreover, the generated solutions can be used for examining various scenarios that are associated with different levels of economic penalties when the pre-regulated policies are violated. Thus, the modeling results would be useful for gaining insight into the tradeoffs between environmental and economic objectives. The TFRIP method has been applied to a case study of long-term waste-management planning. In its modeling formulation, the continuous variables are related to the first- and second-stage decisions that represent the allocations of allowable and excess waste flows, respectively. The binary decision variables are related to capacity-expansion schemes for waste-management facilities. In its solution process, the fuzzy decision space is delimited into a more robust one by specifying the uncertainties through dimensional enlargement of the original fuzzy constraints. The generated solutions can provide desired waste-flow-allocation and capacity-expansion plans with a minimized system cost and a maximized system feasibility. Compared with the conventional TSP method, the TFRIP can not only incorporate more formats of uncertainties within the optimization framework, but also deal with the dynamic issue of capacity-expansion planning for waste-management facilities. The TFRIP also improves upon the existing RP approaches in reflecting economic penalties of corrective measures against any infeasibilities arising due to a particular realization of system uncertainties (presented as probability distributions). In general, although this study is a new attempt from both methodology and application points of view, the results suggest that the proposed technique is applicable to the study case and can be potentially extended to other problems that involve complexities in systems uncertainties, dynamics, and policy implications.