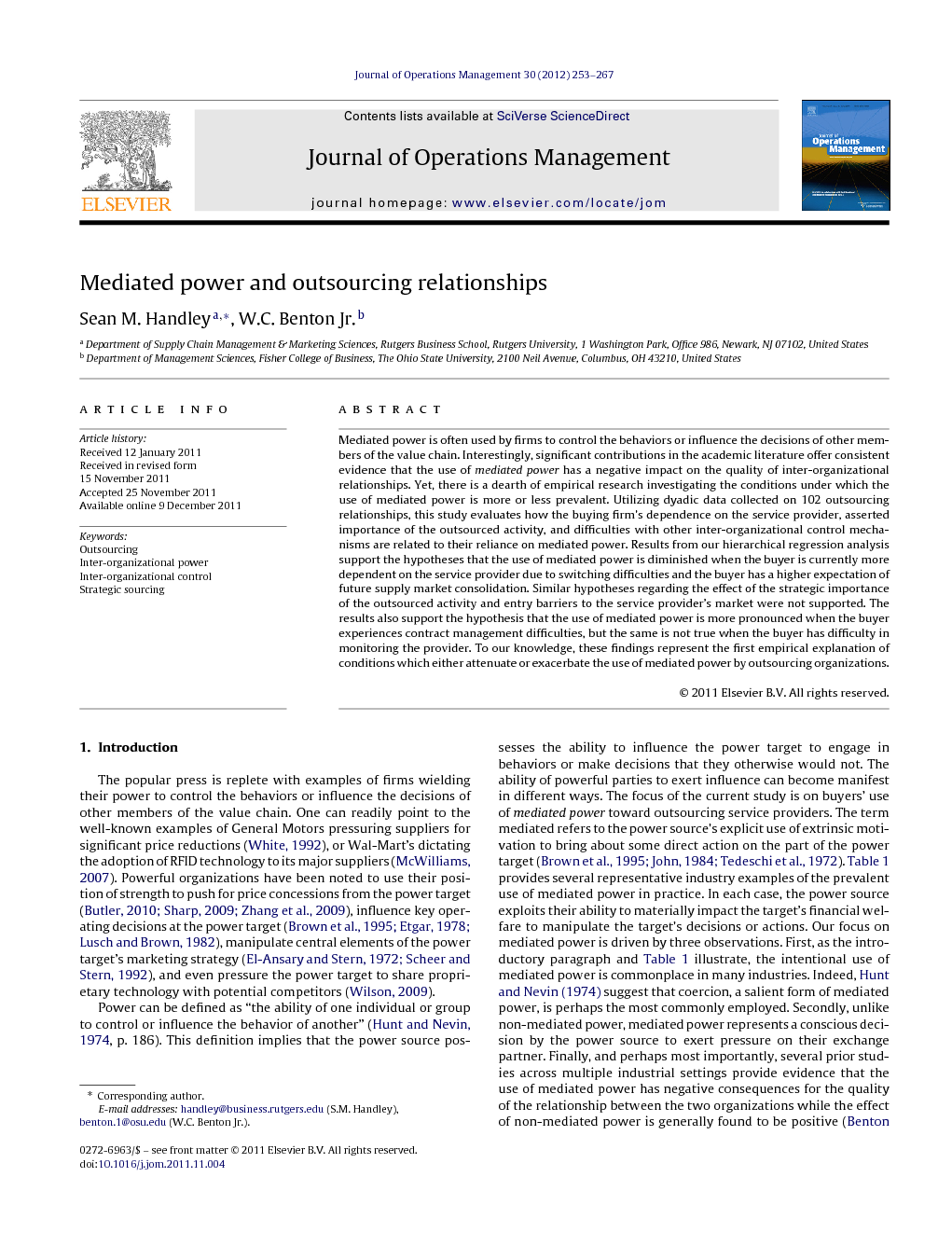 The popular press is replete with examples of firms wielding their power to control the behaviors or influence the decisions of other members of the value chain. One can readily point to the well-known examples of General Motors pressuring suppliers for significant price reductions (White, 1992), or Wal-Mart's dictating the adoption of RFID technology to its major suppliers (McWilliams, 2007). Powerful organizations have been noted to use their position of strength to push for price concessions from the power target (Butler, 2010, Sharp, 2009 and Zhang et al., 2009), influence key operating decisions at the power target (Brown et al., 1995, Etgar, 1978 and Lusch and Brown, 1982), manipulate central elements of the power target's marketing strategy (El-Ansary and Stern, 1972 and Scheer and Stern, 1992), and even pressure the power target to share proprietary technology with potential competitors (Wilson, 2009). Power can be defined as “the ability of one individual or group to control or influence the behavior of another” (Hunt and Nevin, 1974, p. 186). This definition implies that the power source possesses the ability to influence the power target to engage in behaviors or make decisions that they otherwise would not. The ability of powerful parties to exert influence can become manifest in different ways. The focus of the current study is on buyers’ use of mediated power toward outsourcing service providers. The term mediated refers to the power source's explicit use of extrinsic motivation to bring about some direct action on the part of the power target ( Brown et al., 1995, John, 1984 and Tedeschi et al., 1972). Table 1 provides several representative industry examples of the prevalent use of mediated power in practice. In each case, the power source exploits their ability to materially impact the target's financial welfare to manipulate the target's decisions or actions. Our focus on mediated power is driven by three observations. First, as the introductory paragraph and Table 1 illustrate, the intentional use of mediated power is commonplace in many industries. Indeed, Hunt and Nevin (1974) suggest that coercion, a salient form of mediated power, is perhaps the most commonly employed. Secondly, unlike non-mediated power, mediated power represents a conscious decision by the power source to exert pressure on their exchange partner. Finally, and perhaps most importantly, several prior studies across multiple industrial settings provide evidence that the use of mediated power has negative consequences for the quality of the relationship between the two organizations while the effect of non-mediated power is generally found to be positive ( Benton and Maloni, 2005 and Boyle et al., 1992). Empirical evidence also suggests that the use of mediated power is associated with the power target expressing less satisfaction with the inter-organizational relationship (Hunt and Nevin, 1974), lower levels of normative commitment to the relationship (Brown et al., 1995), and diminished levels of inter-firm agreement on key operating decisions (Frazier and Summers, 1984). Given the prevalent use of mediated power in inter-organizational relationships along with the negative impact it appears to have on the quality of the relationship, the dearth of research exploring why, or under what conditions, firms employ mediated rather than non-mediated forms of power is surprising.

The use of mediated power by buying organizations to influence and control other value chain participants is commonly seen in practice. These observations have led to a rich body of academic research concerning the sources and use of power in inter-organizational relationships. One of the more consistent findings to come out of this body of work, and substantiated by our criterion-related validity assessment, is that the use of mediated power tends to have negative consequences for the quality of the inter-organizational relationship. In particular, the power target expresses less satisfaction and commitment to the relationship, and an increased proclivity to act opportunistically. Despite these important findings, little if any empirical research has been conducted in an effort to explain why, or under what conditions, buying organizations continue to rely on mediated forms of power. Using dyadic data collected on 102 outsourcing relationships, this study begins to address this void. The findings derived from our regression analysis suggest that outsourcing organizations may not use mediated power arbitrarily. Rather, the degree to which mediated methods are used to a greater or lesser extent appears to be consistent with theory. Drawing on prior contributions from the fields of inter-organizational power, agency theory, and strategic sourcing, our model was able to explain over 40% of the variance observed in the use of mediated power. Although our cross-sectional data limits the degree to which formal claims of causation can be made; we were able to identify characteristics of inter-firm relationships that have a significant association (both positive and negative) with the buyer's reliance on mediated power. Consistent with power theory and strategic sourcing best practices, the buying firm's expressed current level of switching difficulty and expected level of supply market consolidation have a significantly negative association with the use of mediated power and a positive association with non-mediated methods. Outsourcing organizations appear to not only consider current supply market conditions, but also future environmental circumstances in crafting their relationship management orientation. Perhaps being fully cognizant of the negative relational impact of mediated power, outsourcing organizations rely more on mediated power when they perceive that they have numerous qualified and easily accessible alternatives to the current service provider. Alternatively, when buyers view their sourcing options as limited, or at least unattractive, they appear more inclined to rely on non-mediated methods. These findings are consistent with prior studies of inter-organizational power associating mediated power with the negative, competitive orientation toward relationship management, and associating non-mediated power with the more cooperative, relational orientation. Additionally, as the use of mediated power may be viewed as an alternative to contractual incentives, the results from this study demonstrate a strong association between the buying firm's contract management difficulties and their reliance on mediated power. This implies that buying organizations may view mediated power as a substitute for effective contract management in attempting to control provider behavior and align the provider's interests with their own. The confidence that can be placed in these findings is enhanced due to the dyadic nature of the data. For all hypotheses, data on the independent variable was collected from a different source (i.e. buyer) than the dependent variable (i.e. provider).