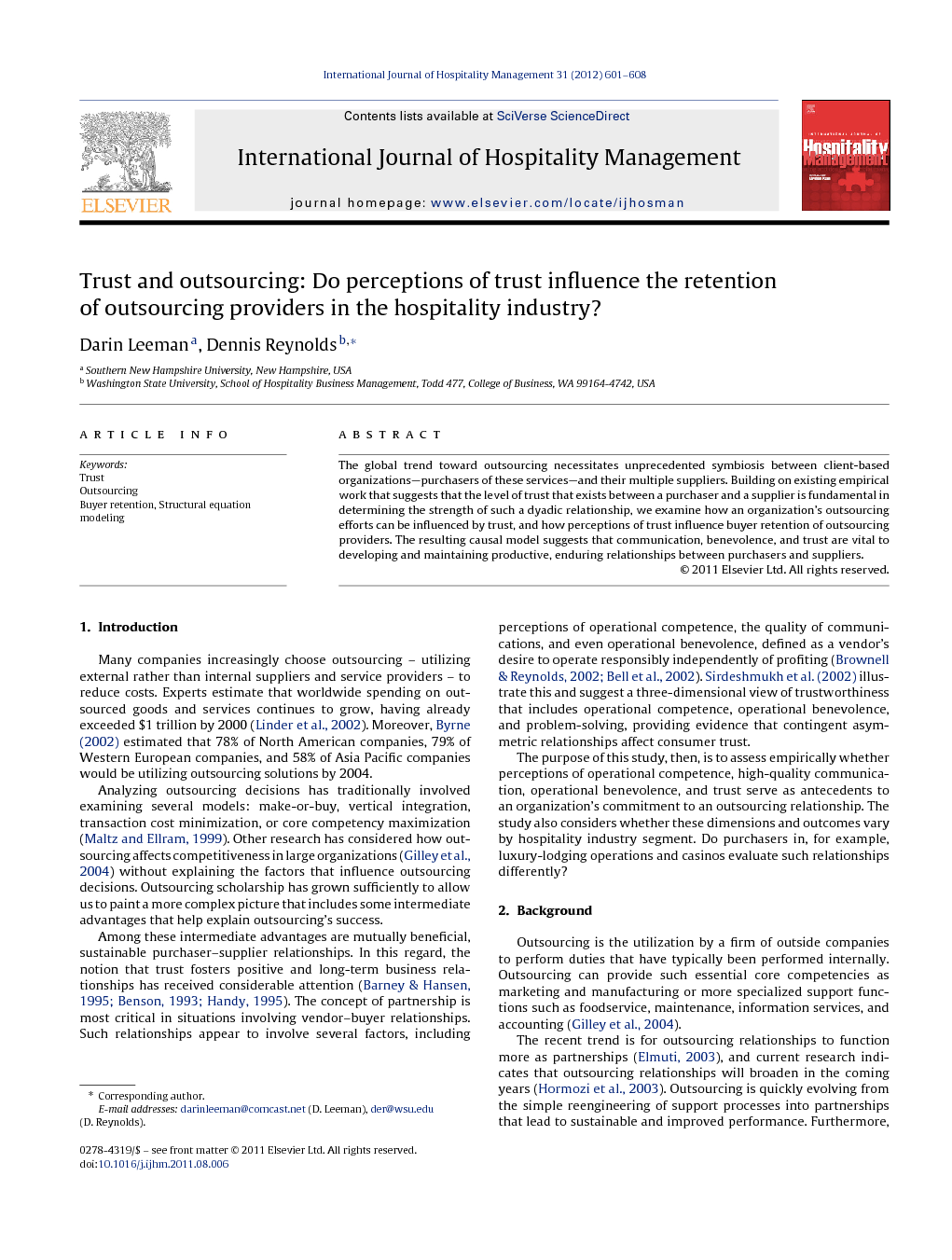 The global trend toward outsourcing necessitates unprecedented symbiosis between client-based organizations—purchasers of these services—and their multiple suppliers. Building on existing empirical work that suggests that the level of trust that exists between a purchaser and a supplier is fundamental in determining the strength of such a dyadic relationship, we examine how an organization's outsourcing efforts can be influenced by trust, and how perceptions of trust influence buyer retention of outsourcing providers. The resulting causal model suggests that communication, benevolence, and trust are vital to developing and maintaining productive, enduring relationships between purchasers and suppliers.

Many companies increasingly choose outsourcing – utilizing external rather than internal suppliers and service providers – to reduce costs. Experts estimate that worldwide spending on outsourced goods and services continues to grow, having already exceeded $1 trillion by 2000 (Linder et al., 2002). Moreover, Byrne (2002) estimated that 78% of North American companies, 79% of Western European companies, and 58% of Asia Pacific companies would be utilizing outsourcing solutions by 2004. Analyzing outsourcing decisions has traditionally involved examining several models: make-or-buy, vertical integration, transaction cost minimization, or core competency maximization (Maltz and Ellram, 1999). Other research has considered how outsourcing affects competitiveness in large organizations (Gilley et al., 2004) without explaining the factors that influence outsourcing decisions. Outsourcing scholarship has grown sufficiently to allow us to paint a more complex picture that includes some intermediate advantages that help explain outsourcing's success. Among these intermediate advantages are mutually beneficial, sustainable purchaser–supplier relationships. In this regard, the notion that trust fosters positive and long-term business relationships has received considerable attention (Barney and Hansen, 1995, Benson, 1993 and Handy, 1995). The concept of partnership is most critical in situations involving vendor–buyer relationships. Such relationships appear to involve several factors, including perceptions of operational competence, the quality of communications, and even operational benevolence, defined as a vendor's desire to operate responsibly independently of profiting (Brownell and Reynolds, 2002 and Bell et al., 2002). Sirdeshmukh et al. (2002) illustrate this and suggest a three-dimensional view of trustworthiness that includes operational competence, operational benevolence, and problem-solving, providing evidence that contingent asymmetric relationships affect consumer trust.

Building on extant research, this study has investigated how key factors—communication, competence, benevolence, and trust—influence the client–vendor relationship. While focusing on one particular business segment, this analysis may be generalizable to the extent that buyers across many industries choose outsourcing vendors based on a perceived environment of trust, and apparently are yet more inclined to commit to a relationship when all other terms are met. The study's importance and the uniqueness of its contribution lie in its attempt to make vendors aware of client expectations by reference to a set of variables that strengthen outsourcing relationships. The findings of this study generally indicate that each of the independent variables measured influences a client's commitment to and subsequent retention of a vendor. This influence can, however, be viewed in a variety of ways depending on how the variables are organized within a given model. Strong correlations among all the variables do result from statistical analysis, suggesting that each plays an important role in the buyer–vendor relationship. Moreover, we find that the correlation between trust and the other independent variables appears strong. This suggests there is a pattern in the influence of these variables on trust. More importantly, it shows that, above all, an environment of trust is necessary for establishing lasting commitment. It is less certain, however that the correlations between commitment, benevolence, communication, and competence with trust are roughly equal in strength. The alternative models help to clarify the results, with each of the antecedents leading to the strongest relationship commitment.