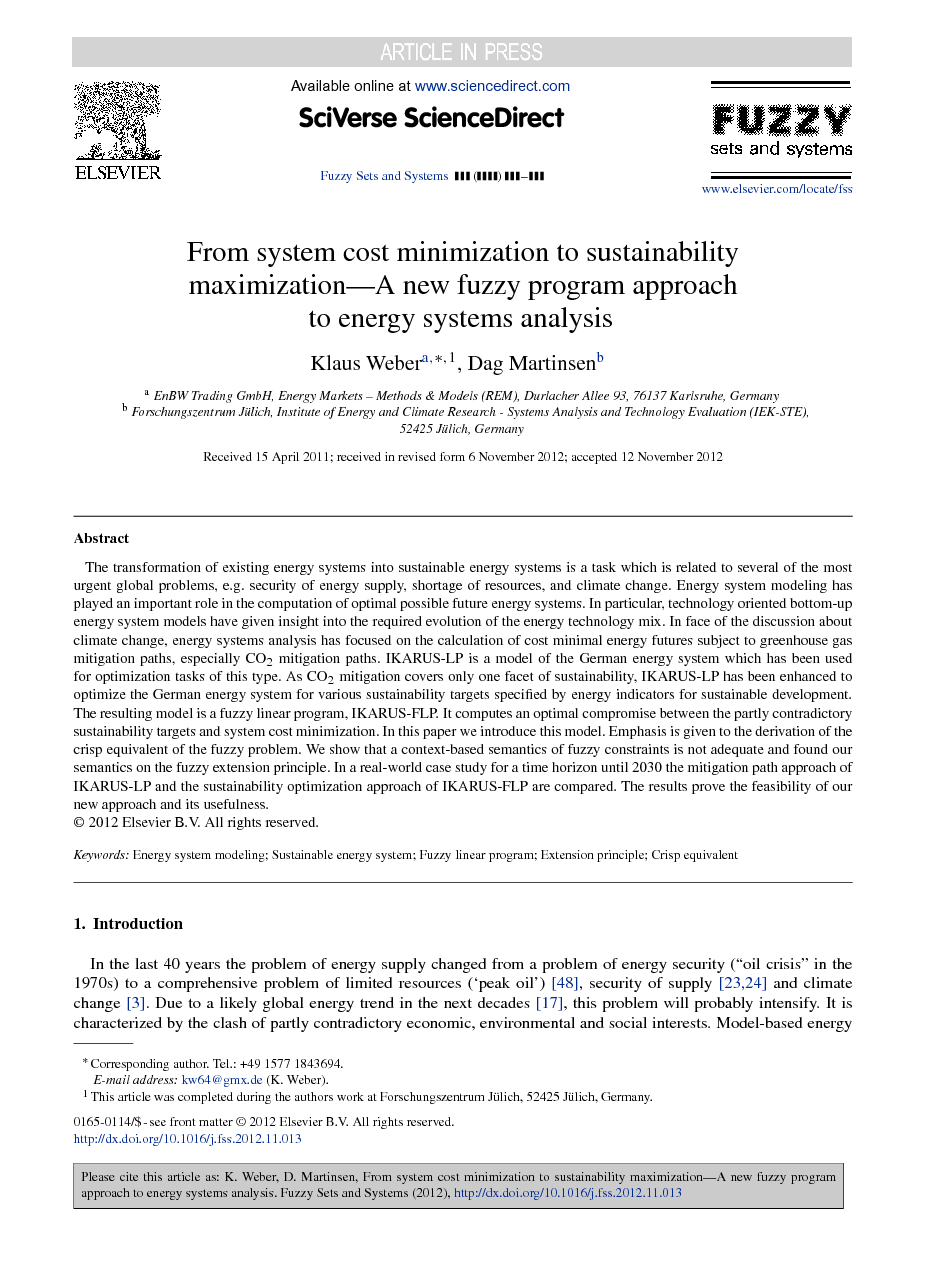 The transformation of existing energy systems into sustainable energy systems is a task which is related to several of the most urgent global problems, e.g. security of energy supply, shortage of resources, and climate change. Energy system modeling has played an important role in the computation of optimal possible future energy systems. In particular, technology oriented bottom-up energy system models have given insight into the required evolution of the energy technology mix. In face of the discussion about climate change, energy systems analysis has focused on the calculation of cost minimal energy futures subject to greenhouse gas mitigation paths, especially CO2 mitigation paths. IKARUS-LP is a model of the German energy system which has been used for optimization tasks of this type. As CO2 mitigation covers only one facet of sustainability, IKARUS-LP has been enhanced to optimize the German energy system for various sustainability targets specified by energy indicators for sustainable development. The resulting model is a fuzzy linear program, IKARUS-FLP. It computes an optimal compromise between the partly contradictory sustainability targets and system cost minimization. In this paper we introduce this model. Emphasis is given to the derivation of the crisp equivalent of the fuzzy problem. We show that a context-based semantics of fuzzy constraints is not adequate and found our semantics on the fuzzy extension principle. In a real-world case study for a time horizon until 2030 the mitigation path approach of IKARUS-LP and the sustainability optimization approach of IKARUS-FLP are compared. The results prove the feasibility of our new approach and its usefulness

In the last 40 years the problem of energy supply changed from a problem of energy security (“oil crisis” in the 1970s) to a comprehensive problem of limited resources (‘peak oil’) [48], security of supply [23,24] and climate change [3]. Due to a likely global energy trend in the next decades [17], this problem will probably intensify. It is characterized by the clash of partly contradictory economic, environmental and social interests. Model-based energy systems analysis has contributed heavily to gain insight into the complexity of energy systems and to solve above problems [18]. One of these models is the technology oriented bottom-up (TOBU) energy system optimization model of Germany, IKARUS-LP [29,30]. Due to the ongoing climate change, in the last few years IKARUS-LP and other energy system models have been focused on the development of greenhouse gas (GHG) mitigation scenarios on various geographical levels, e.g. [8,32]. Even though an energy system with much less GHG emissions is worth striving for, solving the above-mentioned problems requires a broader view on energy systems as it is constituted by the concept of sustainability [10]. In this paper we introduce a new approach to energy systems analysis which can be used to compute the optimal transmission of an energy system into a sustainable energy system. The vague concept of sustainability can be quantified by utilizing sustainability indicators. By this means, a sustainable energy system is defined by a variety of sustainability indicator targets, and the problem to compute the optimal transmission towards such system becomes a multi-objective optimization problem. Fuzzy logic which is not dichotomic and allows to model uncertain concepts can be applied beneficially to solve the above problem. Even though a sustainability target like the amount of CO2 which is emitted into the atmosphere in the year 2050 could be defined by a crisp number, this does not make sense for two reasons: First, human decision makers do not care about exact numbers with regard to CO2 mitigation targets. Second, this sustainability target is contradicting other sustainability targets (e.g. in Germany the aim of energy security could be easily reached by burning domestic lignite for electricity generation) and the general economic target of cost minimization (as CO2 reduction requires for technology which is still more expensive than “fossil technology”). Therefore, we enhanced the IKARUS model to IKARUS-FLP, where sustainability targets are modeled by fuzzy sets. Optimization of contradictory sustainability and cost targets means to search for the best possible compromise between these targets. In fuzzy programming this goal is achieved by formulating targets as fuzzy constraints. We follow this approach and derive a crisp equivalent of the fuzzy problem by the application of the fuzzy extension principle for a general t-norm. Fuzzy logic has been applied for the sustainability analysis of energy systems (e.g. in technology assessment [27,28]) and it has been applied in general energy systems analysis (e.g. [36]), but, as far as we know, our fuzzy programming approach IKARUS-FLP is unique in this field of research. We want to underline the importance of fuzzy logic by a closer look at sustainability indicators. Table 3 lists all indicators which we are currently considering in our studies. Sustainability indicators are crisp quantities whose values are calculated from basic quantities of the energy system model. For instance, indicator ENV 1-1, the total amount of CO2 emissions, depends on the primary energy carriers used in the energy system and their specific CO2 emissions. Sustainability is improved as the value of ENV 1-1 decreases. Other indicators should be increased, e.g. ECO 13, the share of renewable energy in the total primary energy supply. Equally, other sustainability indicators are maximized or minimized. Beside the indicators, focus is put on the overall system cost which are to be minimized. So far, the problem is a crisp multi-criteria optimization problem. However, maximization or minimization of sustainability indicators and system cost is “blind”. Actually, it is known which indicator values should be achieved, which are not acceptable at all, and how to evaluate values in-between. This knowledge on sustainability targets can be modeled by fuzzy sets in an intuitive manner, as a fuzzy set evaluates some elements of its universe by 1 (optimal), other elements by 0 (not acceptable) and the remaining elements by a number between 0 and 1, according to their appropriateness. Table 3 shows the fuzzy targets given by LR-type fuzzy sets (see Definition 1). This is one advantage of using fuzzy numbers. Furthermore, owing to the long time horizon of several decades and the usual differences of expert opinions, the fuzzy approach is more suitable than a crisp approach that would prevent an accuracy which does not exist in reality. And finally, by means of fuzzy targets the multi-criteria optimization problem gets a form which can be easily solved. The remaining paper is organized as follows. Section 2 introduces to energy system modeling and to TOBU models. It explains how IKARUS-LP has been used to compute energy system scenarios for CO2 mitigation paths. Finally, we motivate the fuzzy enhancement of TOBU models in order to compute transition paths towards sustainable energy systems. Section 3 describes the fuzzy enhancement of the IKARUS model. After a literature review we derive our new approach to fuzzy constraints and introduce its application to IKARUS. The resulting IKARUS-FLP model is examined in a case study in Section 4. Concluding remarks summarize the outcome of our paper and indicate further directions of our work. For the following we assume that the reader is familiar with the concepts of fuzzy logic. Detailed introductions are given, e.g. in [4,9,21,49]. A more fundamental paper is [47]. The notions of reference function, LR-type fuzzy set, <P-operator, and height of a fuzzy set are defined before they are used. An overview of the fuzzy notation we use in this paper is summarized in Table 1. Abbreviations and acronyms are listed in Table 2.

In this paper we demonstrated the feasibility and usefulness of the TOBU energy systems optimization model IKARUS-FLP which is based on a fuzzy linear program. We argued that the task of transforming existing energy systems into sustainable energy systems cannot be achieved by traditional energy system models that minimize system cost subject to some crisp constraints, in particular CO2 mitigation paths. The quantification of sustainability by means of EISD allows to specify various concrete sustainability targets in the spheres of society, economy and environment. We motivated why such targets should be modeled by fuzzy sets. The resulting optimization problem comprises fuzzy constraints. In order to avoid any context-dependency we applied the fuzzy extension principle for an arbitrary t-norm to define the “crisp equivalent” of the fuzzy program. Our approach optimizes the compromise between the partly contradicting sustainability targets and the sustainability cost minimization. Finally, a real-world case study compared the traditional IKARUS-LP energy system model with the new IKARUS-FLP model. The results emphasize both feasibility and usefulness of our approach. Sustainability is a rather complex concept, especially if it is related to an energy system that evolves over time. For some sustainability indicators not only their target value (at the end of the time horizon) is important, but, in fact, their aggregated values over time. An example is the quantity of CO2 emitted to the atmosphere. Moreover, the energy system model need to demonstrate a continuous development. This does not exclude sharp changes in the technology mix from one optimization period to the next period, but oscillations and back and forth movements are not realistic. These requirements show one direction of further research. Another direction is the attempt to reduce the number of endogenous quantities, e.g. demand of the end use sectors for energy services. For this purpose we couple the TOBU models with macroeconomic models in a bidirectional way. While the TOBU model gets demand figures from the macroeconomic model, it passes back investment sums of various economic sectors, e.g. the electricity sector. In this way, we hope to get more realistic models and to give answer to questions unanswered yet.