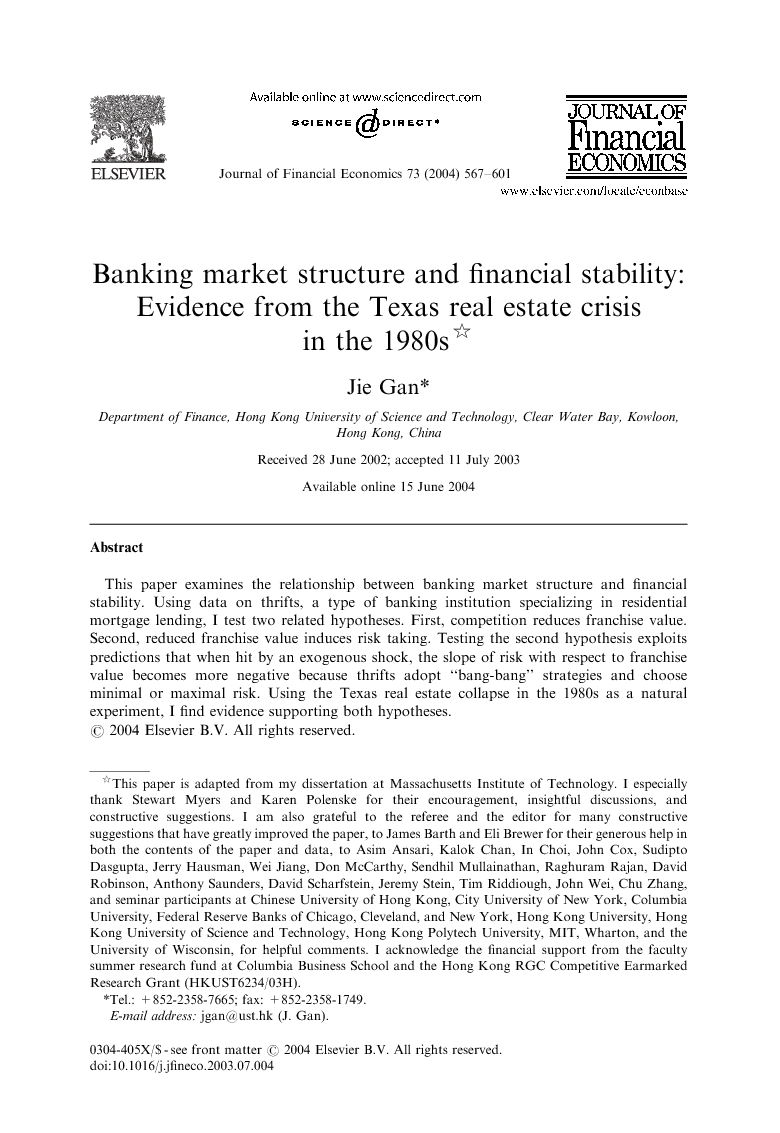 Casual observation suggests that recent financial crises, such as the thrift crisis in the United States and the financial crisis in Southeast Asia, were preceded by waves of financial liberalization that promoted competition. Hellmann et al. (2000) and Allen and Gale (2000) explicitly model how competition, as a result of financial liberalization, can induce banks to bid up deposit rates and reduce franchise value (the discounted stream of future profits). Declining franchise value, combined with a deposit insurance guarantee, accentuates risk-shifting incentives. The resulting moral hazard and risk taking, in turn, can lead to financial instability. Besanko and Thakor (1993) model the impact of competition on the asset side (i.e., the value of relationship banking) and reach a similar conclusion. However, no empirical evidence shows a direct link between banking market structure (i.e., competition) and financial instability.1 This paper empirically investigates the interactions among market structure, franchise value, and bank risk by examining a particular type of banking institution that specializes in residential mortgage lending, i.e., savings and loans or thrifts. Specifically, the paper tests two hypotheses. First, competition reduces franchise value. Second, declining franchise value, combined with government deposit insurance guarantees, leads to increased risk taking. Although no previous study has examined both hypotheses, several papers have studied the second one, contributing to an understanding of bank risk taking (e.g., Keeley, 1990; Saunders and Wilson, 1996; Gorton and Rosen, 1995). As discussed later, the results are mixed and suggest a number of methodological difficulties, such as measurement error and omitted variables, in testing for such a relation. I use the Texas real estate collapse in the 1980s and its impact on the thrift industry as a natural experiment to test these hypotheses. Franchise value comes from two sources: rents on assets-in-place and future investment opportunities. Several authors (e.g., Marcus, 1984; Marshall and Venkataraman, 1999; Gan, 2003) show that when banks do not earn rents on assets-in-place, they adopt “bang-bang” strategies: banks with many positive net present value (NPV) investment opportunities adopt the safe strategies to get out of trouble, while those with few positive-NPV investment opportunities go to the opposite extreme and gamble for resurrection. A direct implication is that, if banks are hit by an exogenous shock that wipes out their current profits, they tend to choose either the minimal or the maximal feasible risk. The slope of bank risk with respect to franchise value thus becomes more negative. This result provides a unique way to identify the impact of franchise value on risk taking: it can be transformed into testing for a steeper (more negative) slope. Focusing on differences instead of levels is more robust to endogeneity issues, because even if the slope estimates are biased, the difference in the estimates is unbiased to the extent that the biases are of similar magnitude before and after a shock. The prediction about bank behavior when struck by exogenous shocks applies well to Texas thrifts during the real estate crisis of the 1980s. During this time, falling oil prices and new federal tax laws dramatically reduced the demand for real estate, resulting in a collapse in both the commercial and residential real estate markets. This collapse seriously hurt Texas thrifts, whose main business is in residential mortgage lending. It essentially eliminated the thrifts’ rents on assets-in-place and induced them to adopt “bang-bang” strategies. Moreover, compared with commercial banks, the thrift industry has several industry characteristics, including fewer repeated transactions in mortgage lending, higher insider ownership, and more clearly defined local markets. These industry characteristics, as is discussed later, provide additional advantages that increase the statistical power of the tests and mitigate potential omitted-variable problems. This paper presents evidence supporting the theoretical predictions. I show that market concentration is positively related to franchise value. When the Texas real estate market collapsed, thrifts adopted “bang-bang” strategies, and the propensity of thrifts to increase risk was negatively related to franchise value. Moreover, the slope of risk with respect to franchise value became more negative during the shock. Taken together, the evidence suggests that a concentrated market structure preserves franchise value and increases financial stability. The remainder of this paper is organized in four sections. Section 2 lays out the empirical strategy. Section 3 describes the sample and defines important variables. Section 4 reports the main empirical results. Finally, Section 5 summarizes and concludes the paper.

I have presented evidence consistent with the view that banking market structure affects risk taking and therefore financial stability. Using the Texas real estate crisis as a natural experiment, I perform two sets of tests. The first set tests for a relationship between market structure and franchise value. Using data on Texas thrifts, a type of banking institution specializing in mortgage lending, I find that market concentration leads to higher franchise value. The second set of tests focuses on the relationship between franchise value and risk, which is identified through an exogenous shock. I empirically confirm that, when hit by an exogenous shock that wipes out current rents, thrifts adopt “bang-bang” strategies. Testing the relationship between franchise value and risk is thus transformed into testing for a difference in the slopes of risk. I find that the slope becomes more negative after the shock, suggesting that higher franchise value induces thrifts to be more prudent. The central features of banks in the models predicting a relationship between market structure and risk taking include debt financing, government insurance, current rents, and future investment opportunities. Thus, although my tests are performed on a sample of thrifts, the results in this paper should apply not only to thrifts, but also to any banking institutions that have the above features. These results lend support to theoretical predictions that, to the extent that it increases competition, financial liberalization could lead to financial instability (e.g., Besanko and Thakor, 1993; Allen and Gale, 2000; Hellmann et al., 2000). To my knowledge, this is the first paper that shows a direct link between banking market structure and financial stability. This paper also has interesting macroeconomic implications. It is well known that exogenous shocks worsen the asymmetric information problem between borrowers and lenders by changing the borrowers’ net worth, which results in a further decline in outputs (e.g., Bernanke and Gertler, 1989; Calomiris and Hubbard, 1990). The results in this paper suggests that the “bang-bang” strategies banks adopt in response to exogenous shocks represent an alternative mechanism that generates macro instability. To the extent that franchise value of banks is correlated, if the majority of banks have high franchise value, they tend to shift into safe assets and cut down on lending, resulting in a credit crunch. When most banks are prone to risk taking, the moral-hazard problem can lead to widespread bank failure, thus amplifying a downturn. Financial stability achieved from market concentration, or less competition, is not, however, without costs. Market power enables banks to charge higher interest on loans, pay lower interest on deposits, and distort the savings and investment decisions of consumers and producers. Similarly, excessive fees for banking services raise the costs of transactions and distort exchange behaviors (see, e.g., Alhadeff, 1954; Freixas and Rochet, 1997). Finally, without competition, banks tend to operate within the limits of their technical capacities, the so-called X-inefficiency (see, for a survey, Berger and Mester, 1997). This paper complements the literature by pointing out a possible adverse effect of competition; that is, competition can cause excessive risk taking. This effect arises from a unique institutional feature of banking: government deposit insurance (either implicit or explicit). Therefore, regulators face a trade-off between efficiency and stability.