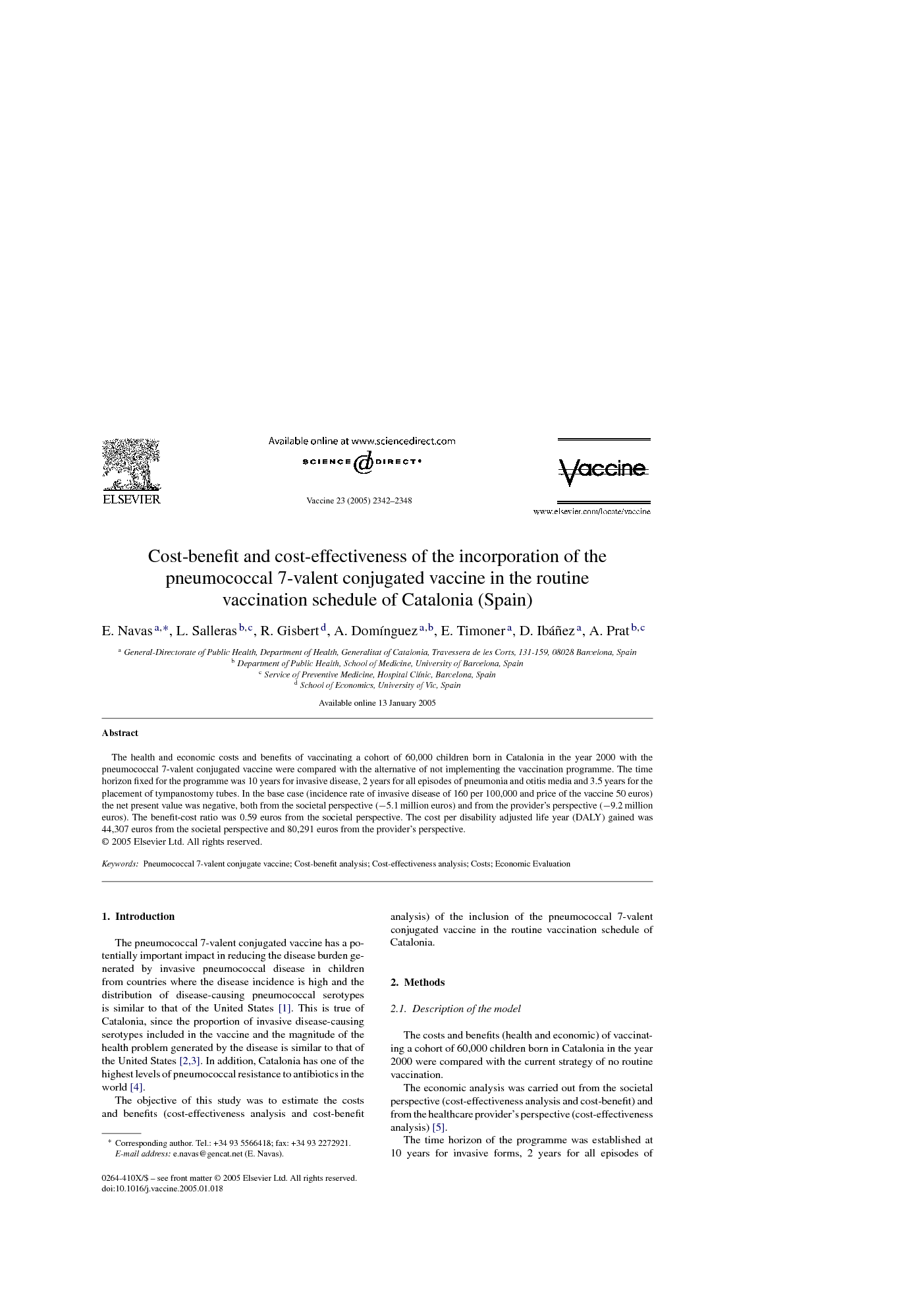 The pneumococcal 7-valent conjugated vaccine has a potentially important impact in reducing the disease burden generated by invasive pneumococcal disease in children from countries where the disease incidence is high and the distribution of disease-causing pneumococcal serotypes is similar to that of the United States [1]. This is true of Catalonia, since the proportion of invasive disease-causing serotypes included in the vaccine and the magnitude of the health problem generated by the disease is similar to that of the United States [2] and [3]. In addition, Catalonia has one of the highest levels of pneumococcal resistance to antibiotics in the world [4]. The objective of this study was to estimate the costs and benefits (cost-effectiveness analysis and cost-benefit analysis) of the inclusion of the pneumococcal 7-valent conjugated vaccine in the routine vaccination schedule of Catalonia.

In the base case, the vaccination programme does not save money, either from the societal or from the provider's perspective. The costs of the programme are greater than the economic benefits provided and the net present value (in this case, net present cost) is −5.1 million euros from the societal perspective and −9.2 million from the provider's perspective. The benefit-cost ratio is 0.59. Even so, the cost-effectiveness ratios are reasonable. In fact, the cost per DALY gained (44,307 euros from the societal perspective and 80,291 euros from the provider's perspective) is at the level III (favorable costs >10,000 and <100,000 dollars per QALY) established by the Committee to Study Priorities for Vaccine Development [19]. It is also within the level of >20,000 and −100,000 dollars per QALY of health care technologies applied routinely in daily hospital care in developed countries (Laupacis et al.) [20]. The economic analysis carried out was conservative, as some of the potential additional benefits of vaccination, which would give better cost-effectiveness and cost-benefit ratios, were not considered. One is the length of protective efficacy of the vaccine. In non-invasive types (all episodes of pneumonia and otitis media), the time horizon of 2 years coincides with the results of the evaluation studies of the protective efficacy of the vaccine [7]. In the invasive types, the time horizon was established at 10 years, but it is probable that protection is, at least partially, life-long, as the vaccine provides good levels of immunologic memory. However, this will not be determined until the vaccinated cohorts reach older ages when the incidence of invasive disease rises again. Neither were all the potential indirect benefits of the vaccine included. It was considered that herd immunity (mainly due to the reduction in the prevalence of carriers as a consequence of vaccination), would, at a minimum, compensate for the small differences in the coverage of disease-causing serotypes between Catalonia and the United States. However, other important indirect benefits, such as the reduction of cases in adults and especially in elderly members of the families of vaccinated children, which is being observed in the United States, were not considered [21].