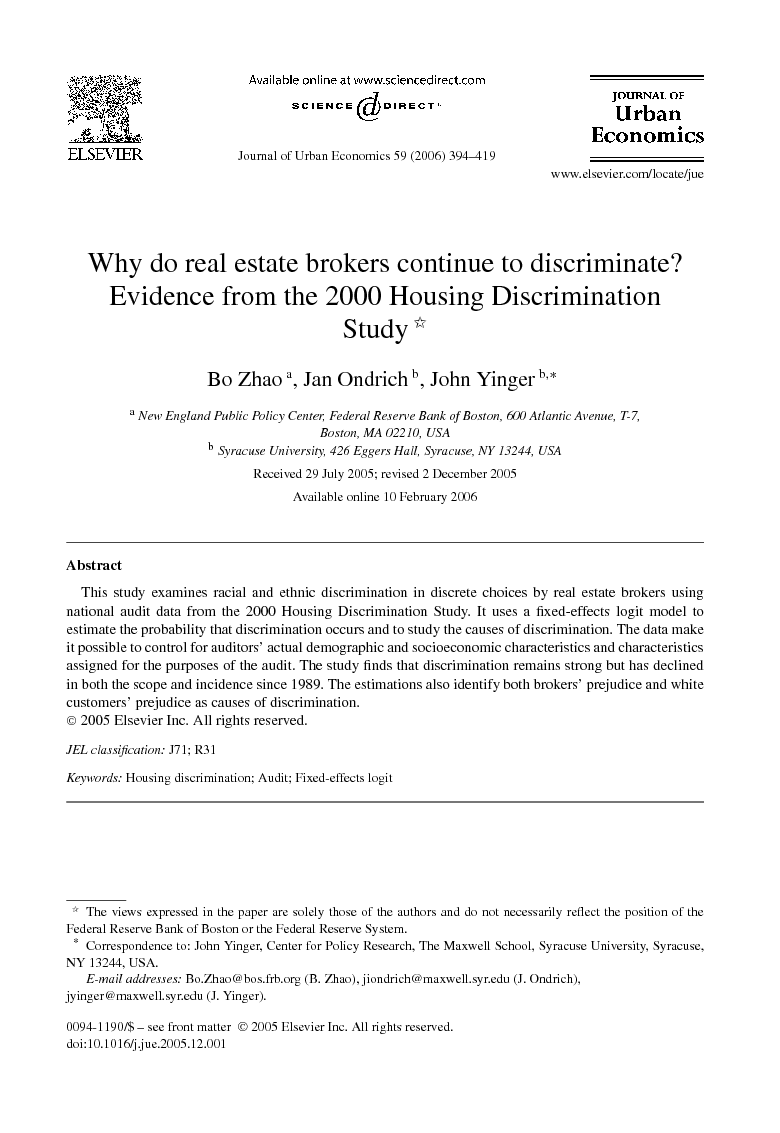 Racial and ethnic discrimination in housing, defined as systematically unfavorable treatment in housing markets based solely on race or ethnicity, contributes to inter-group disparities in housing market outcomes. Discrimination may help to explain, for example, why the 2004 homeownership rate in the United States was 76.0 percent for non-Hispanic whites, but only 49.7 percent for blacks and 48.1 percent for Hispanics (US Department of Housing and Urban Development [25]). This paper uses data from a national study conducted in the United States in 2000 to determine whether discrimination persists in the housing sales market and, if it does, to explore its causes. The Fair Housing Act of 1968 prohibits discrimination in housing. This study helps to determine the extent to which funding is still needed to enforce this act and provides guidance to fair housing enforcement officials. In addition, this study may shed light on the effectiveness of the 1988 amendments to the Fair Housing Act, which gave the federal government stronger law-enforcement powers to fight discrimination (see Yinger [29]). The data for this study come from a matched-pair research technique, discussed in detail below, called a fair housing audit. An earlier national audit study, the 1989 Housing Discrimination Study (HDS 1989), found evidence of widespread discrimination in housing sales. This study is based on the 2000 Housing Discrimination Study (HDS 2000), which updates and improves upon the earlier study.1 We focus our attention on discrete choices by real estate brokers, such as whether to tell a customer that an advertised house is available. Our major contribution is to provide evidence on the causes of discrimination in 2000. In addition, HDS 2000 has a feature not found in previous audit studies: it recorded some of the auditors’ actual demographic and socioeconomic characteristics, such as income and education. As a result, this paper explicitly accounts for an auditor’s actual characteristics, as well as characteristics assigned for the purposes of the audit. The paper proceeds as follows. Section 2 describes the fair housing audit technique and reviews previous audit studies. Section 3 describes the HDS 2000 design, our HDS 2000 data set,and our regression technique, namely, a fixed-effects logit model. Section 4 tests the hypothesis that discrimination exists, measures the discrimination level, and compares the HDS 2000 results with the HDS 1989 results in Ondrich, Stricker, and Yinger [16]. Section 5, the main contribution of the paper, presents and tests hypotheses about the causes of discrimination. The final section summarizes the results and discusses their implications for public policy.

Our analysis of the HDS 2000 data indicates that black and Hispanic home seekers still encounter discrimination in housing sales. Indeed, for some types of broker behavior, the prob-ability of discrimination is still disturbingly high. Nevertheless, we also find that both the scope of discrimination and the probability that it will be encountered in any particular broker’s action have diminished sharply since 1989. For most types of broker behavior we examine, the housing market situation improved for black and Hispanic buyers during the 1990s.26 One possible explanation for this improvement is the enactment of the 1988 amendments to the Fair Housing Act, which significantly boosted the Federal government’s enforcement powers. Ross and Galster [20] provide some preliminary evidence consistent with this explanation. In one case in the black/white audits, follow-up contact made, a large share of the decline in the estimated incidence of discrimination appears to reflect the fact that, unlike HDS 1989, HDS 2000 can control for differences in the actual characteristics of audit teammates. In other cases, however, controlling for these differences has little impact on incidence estimates. We also find that, as in 1989, discrimination still appears to be caused by both brokers’ prejudice and white customers’ prejudice, although we cannot rule out other possible explanations. Our approach does not, for example, provide the same power to detect statistical discrimination as the approach in Ondrich et al. [15], which is not feasible for the behavior we study. Our most striking finding is the decline in discrimination against blacks across several types of broker behavior when the advertised unit is located in a Hispanic neighborhood. The implied higher discrimination in white neighborhoods supports the customer-prejudice hypothesis.We also find that the actual characteristics shared by audit teammates sometimes influence discrimination. Blacks face less discrimination in downpayment discussed and pre-qualified buyer for financing, for example, when both teammates are foreign-born, which suggests that brokers are acting on the basis of prejudice against native-born blacks. Housing audit studies do not measure the consequences of housing discrimination, but the types of discrimination we uncover are likely to limit the housing opportunities of black and Hispanic home seekers. As shown by Yinger [30], groups facing discrimination in the number of houses shown or in the probability of finding a mortgage will, compared to other groups, end up in houses that do not match their preferences very well. In more formal terms, Yinger uses a search model to show that discrimination leads to a loss of consumer surplus. Moreover, anticipated discrimination may induce some households not to search at all, and therefore may affect a group’s mobility and homeownership rates. Yinger estimates the magnitude of these effects in 1989, but a similar effort for 2000 is beyond the scope of this paper. Our findings provide some guidance to fair housing enforcement officials. First, discrimination against black and Hispanic home seekers continues to be a problem in the United States and continued funding of fair housing enforcement efforts is warranted. Second, enforcement officials should be aware that the form of discrimination may change over time; in the case of Hispanics, for example, discrimination has shifted from a direct refusal to show the advertised unit to the more subtle denial of assistance finding financing. Third, our findings imply that enforcement officials should identify and support programs that mitigate brokers’ prejudice, which is an ongoing source of discrimination. Fourth, our findings support the need for a variety of enforcement tools to combat discrimination, including enforcement-based audits to help identify discriminators, and the imposition of penalties to offset the economic incentives that apparently lead some brokers to discriminate.