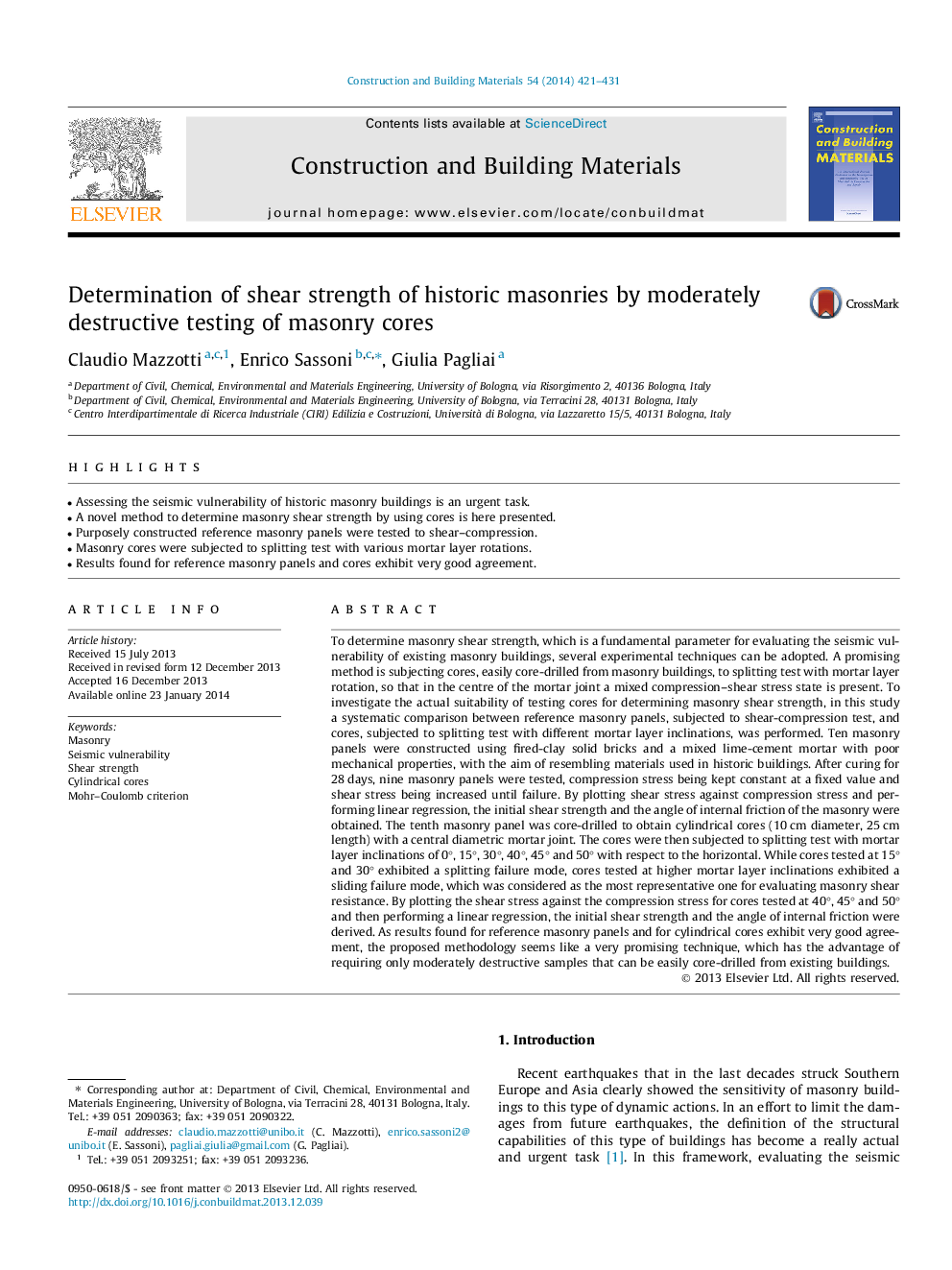 To determine masonry shear strength, which is a fundamental parameter for evaluating the seismic vulnerability of existing masonry buildings, several experimental techniques can be adopted. A promising method is subjecting cores, easily core-drilled from masonry buildings, to splitting test with mortar layer rotation, so that in the centre of the mortar joint a mixed compression–shear stress state is present. To investigate the actual suitability of testing cores for determining masonry shear strength, in this study a systematic comparison between reference masonry panels, subjected to shear-compression test, and cores, subjected to splitting test with different mortar layer inclinations, was performed. Ten masonry panels were constructed using fired-clay solid bricks and a mixed lime-cement mortar with poor mechanical properties, with the aim of resembling materials used in historic buildings. After curing for 28 days, nine masonry panels were tested, compression stress being kept constant at a fixed value and shear stress being increased until failure. By plotting shear stress against compression stress and performing linear regression, the initial shear strength and the angle of internal friction of the masonry were obtained. The tenth masonry panel was core-drilled to obtain cylindrical cores (10 cm diameter, 25 cm length) with a central diametric mortar joint. The cores were then subjected to splitting test with mortar layer inclinations of 0°, 15°, 30°, 40°, 45° and 50° with respect to the horizontal. While cores tested at 15° and 30° exhibited a splitting failure mode, cores tested at higher mortar layer inclinations exhibited a sliding failure mode, which was considered as the most representative one for evaluating masonry shear resistance. By plotting the shear stress against the compression stress for cores tested at 40°, 45° and 50° and then performing a linear regression, the initial shear strength and the angle of internal friction were derived. As results found for reference masonry panels and for cylindrical cores exhibit very good agreement, the proposed methodology seems like a very promising technique, which has the advantage of requiring only moderately destructive samples that can be easily core-drilled from existing buildings.