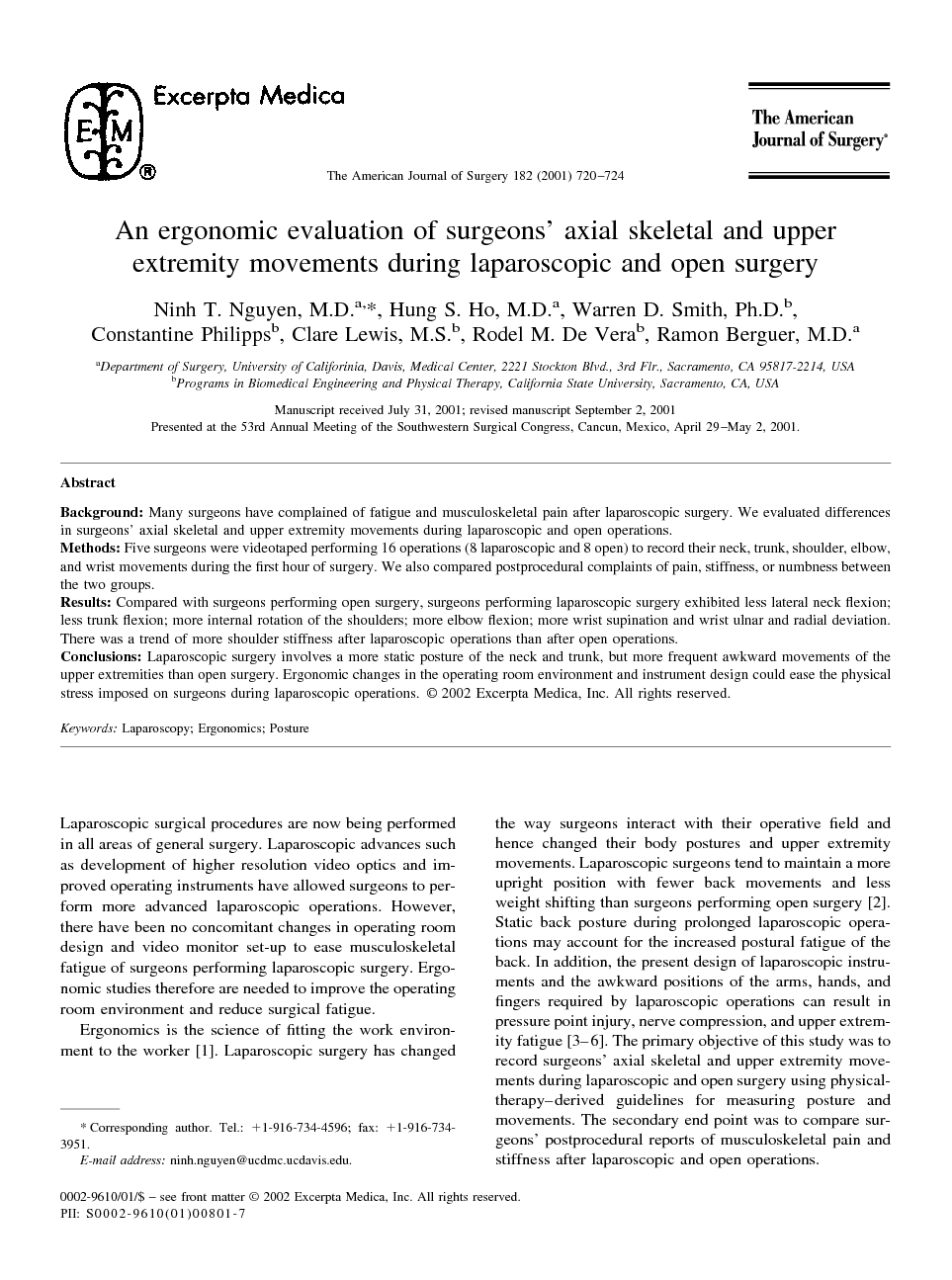 We videotaped five surgeons performing eight laparoscopic and eight open operations. Surgeons’ neck, back, and upper extremity movements exhibited during the laparoscopic operations were compared with those during the open operations. The video provided only a single frontal view of the surgeon’s head to pelvis. Only the first hour of surgery was videotaped and analyzed due to limited time for review of the tapes. Immediately after the surgery, one of two physical therapy students (CP, RDV) from the Program of Physical Therapy at California State University, Sacramento, administered a questionnaire to each surgeon. The questionnaire asked for the presence of, the location of (neck, back, shoulder, hand/wrist on a drawing of a human body), and the severity of pain, stiffness, or numbness on a scale of mild, moderate, and severe. The physical therapy students reviewed all videotapes and recorded the numbers of neck, trunk, shoulder, elbow, and wrist movements using predefined criteria developed by the Department of Physical Therapy. A single specific movement of the neck, back, shoulder, elbow, or wrist was defined as a deviation of the body posture from the neutral upright body position and included its return to the neutral body position. For example, a single movement of wrist supination was any rotational movement from the neutral position going in the direction of supination and back to the neutral position. Neck movements were categorized as flexion, extension, lateral flexion, and rotation. Trunk movements were categorized as flexion and rotation. Shoulder movements were categorized as flexion, abduction, and internal rotation. For elbow movements, the total number of flexion movements (including both <90° and >90°) were counted. Wrist movements were recorded as pronation, supination, flexion, extension, ulnar deviation, and radial deviation. Data were given as the mean number of specific movements ± standard deviation for each body part for both laparoscopic and open operations. Comparison of the number of movements during laparoscopic and open surgery was performed using unpaired t tests or Mann-Whitney U tests for nonparametric data. The percentage of surgeons in the two groups with postoperative pain and stiffness was compared using Fisher’s exact tests. Statistical evaluations were performed using standardized software (Stat-View, SAS Institute Inc., Cary, North Carolina). A P value less than 0.05 was considered significant.